Capacitors store energy in electric fields, proportional to the square of voltage. Inductors store energy in magnetic fields, proportional to the square of current. If capacitors and inductors are connected together, their complementary energy storage modes create a condition where electrical energy transfers back and forth between the capacitance and the inductance: voltage and current both oscillating sinusoidally. We refer to this cyclic exchange of energy as resonance. The simplest resonant circuit possible is the so-called tank circuit, comprised of a single inductor connected to a single capacitor: 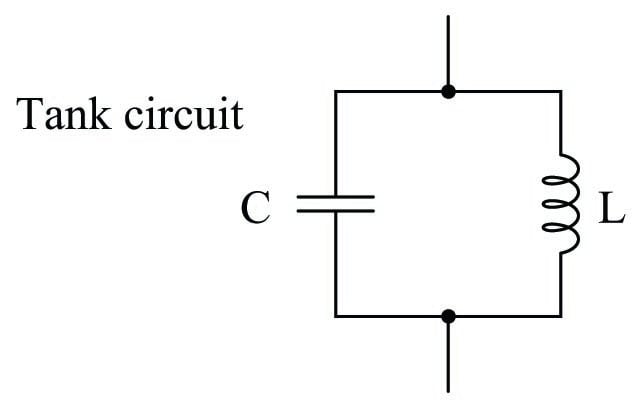 A perfect tank circuit – devoid of electrical resistance and any other energy-dissipating characteristics (e.g. capacitor dielectric losses, inductor hysteresis losses) – would continue to oscillate forever once initially stimulated. That is, if initially “charged” with an impulse of DC voltage, the tank circuit would continue to produce AC voltage and current oscillations at its resonant frequency, at constant peak amplitude, forever:

Since real capacitors and inductors are not lossless, real tank circuits exhibit decaying-amplitude oscillations after initial “charging,” until no energy is stored in either the capacitor or the inductor:

Capacitive losses take the form of heat loss in the dielectric substance separating the capacitor plates. The electric field between the capacitor’s plates imparts forces on any polar molecules within that substance, thereby doing “work” on those molecules by forcing them back and forth as the electric field alternates. Though these forces and motions are extremely small, they are nevertheless capable of draining considerable energy from the capacitor, dissipating it in the form of heat.

Inductive losses are similar, but in the form of work done on ferromagnetic molecules in the core material as the magnetic field alternates polarity. Like dielectric heating, magnetic losses also drain energy from the inductor, dissipating it in the form of heat.

The combined effect of all these energy-loss mechanisms is that the oscillations of an unpowered tank circuit decay over time, until they cease completely. This is similar in principle to a pendulum gradually coming to a halt after being set in motion with a single push: if not for air resistance and other forms of friction, the pendulum should swing forever! With air friction and mechanical friction in the pendulum’s bearing, though, a pendulum’s oscillations gradually diminish in amplitude until all its energy has been lost – swing by swing – to heat.

Capacitance and inductance, however, are not limited to capacitors and inductors: any pair of conductors separated by an insulating medium will exhibit capacitance, and any electrical conductor will exhibit inductance along its length. Even a two-conductor cable (a transmission line) has distributed capacitance and inductance capable of storing energy. If a long, unterminated (no load connected to the far end) cable is “charged” by a pulse of applied DC voltage, it will sustain a series of echoing pulses at a period dependent on the cable’s length and velocity factor: 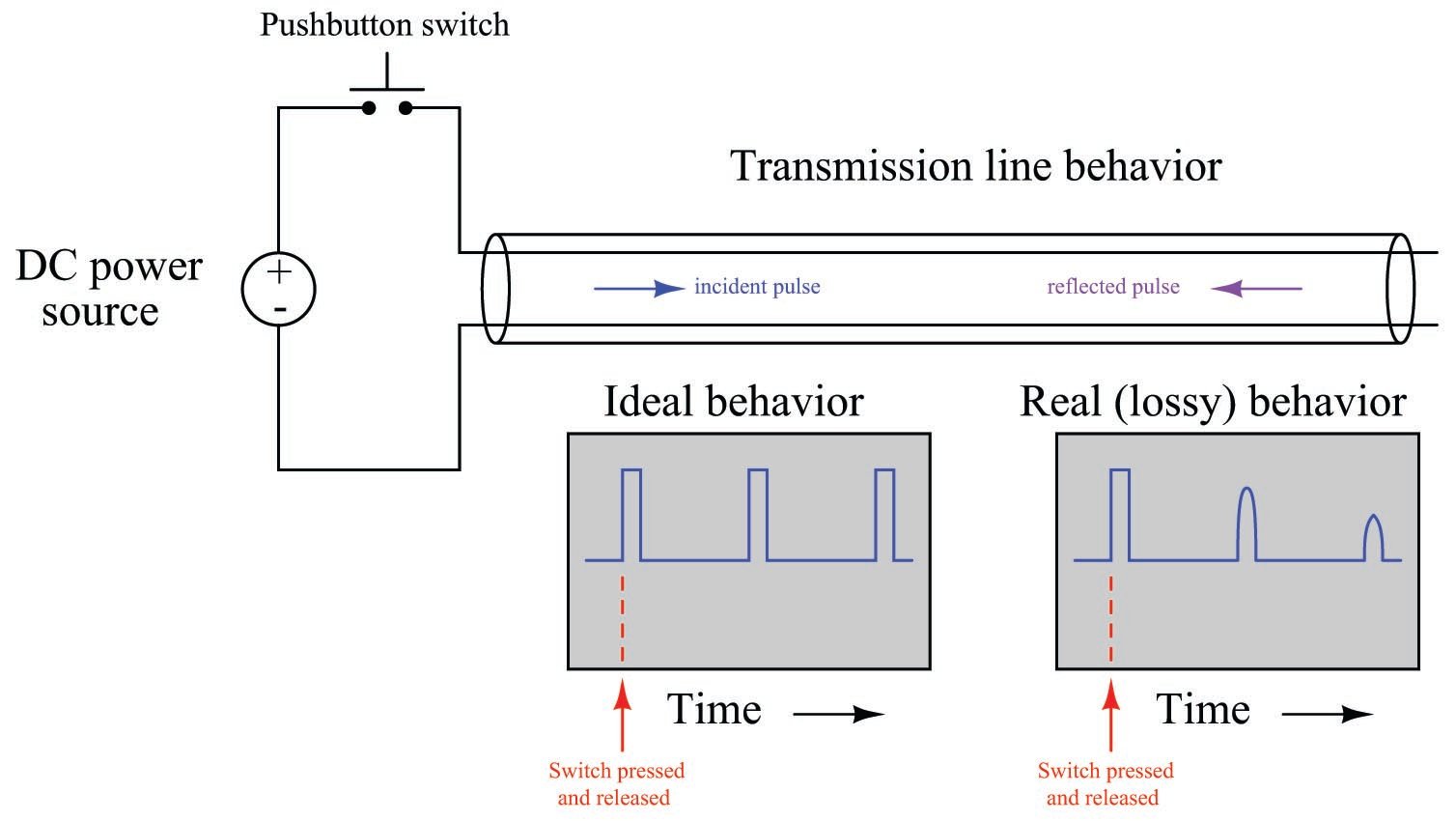 This “poly-resonant” behavior of transmission lines has an analogue in the world of music. “Wind” instruments such as trombones, flutes, trumpets, saxophones, clarinets, recorders, etc., are really nothing more than tubes with at least one open end. These tubes will acoustically resonate at specific frequencies when “excited” by turbulent air flow at one end. The lowest frequency such a tube will resonate at is its “fundamental” frequency, but increasing the turbulence of the incoming air flow will cause the tone to “jump” to some harmonic of that fundamental frequency. The fundamental frequency of the tube may be altered by changing the length of the tube (e.g. as in a trombone or trumpet) or by opening ports along the tube’s length to alter its effective length (flute, saxophone, clarinet, recorder, etc.).

If we were to alter our transmission line test circuit, splaying the two conductors apart from each other rather than running them alongside one another, it would also form another type of resonant circuit, owing to the distributed capacitance and inductance along the wires’ lengths:

This special case of resonant circuit has some very interesting properties. First, its resonant frequency is quite high, because the distributed inductance and capacitance values are extremely small compared to the values of discrete components such as inductors and capacitors. Second, it is a very “lossy” circuit despite having no appreciable electrical resistance to dissipate energy, no solid insulating medium to incur dielectric losses, and no ferromagnetic core to exhibit hysteresis losses. This special form of resonant circuit loses energy not to heat, but rather to electromagnetic radiation. In other words, the energy in the electric and magnetic fields leave the circuit and propagate through space in the form of electro-magnetic waves, or what we more commonly refer to now as radio waves: a series of electric and magnetic fields oscillating as they radiate away from the wires at the speed of light.

An interesting historical footnote is that this phenomenon of electromagnetic waves propagating through space was predicted theoretically before it was demonstrated experimentally. A Scottish physicist named James Clerk Maxwell made an astonishing theoretical prediction which he published in 1873, expressed in these four equations:

The Prussian Academy of Science offered a reward to anyone who could experimentally validate Maxwell’s prediction, and this challenge was met by Professor Heinrich Hertz at the Engineering College in Karlsruhe, Germany in 1887, eight years after Maxwell’s death. Hertz constructed and tested a pair of devices: a “radiator” to produce the electromagnetic waves, and a “resonator” to receive them. 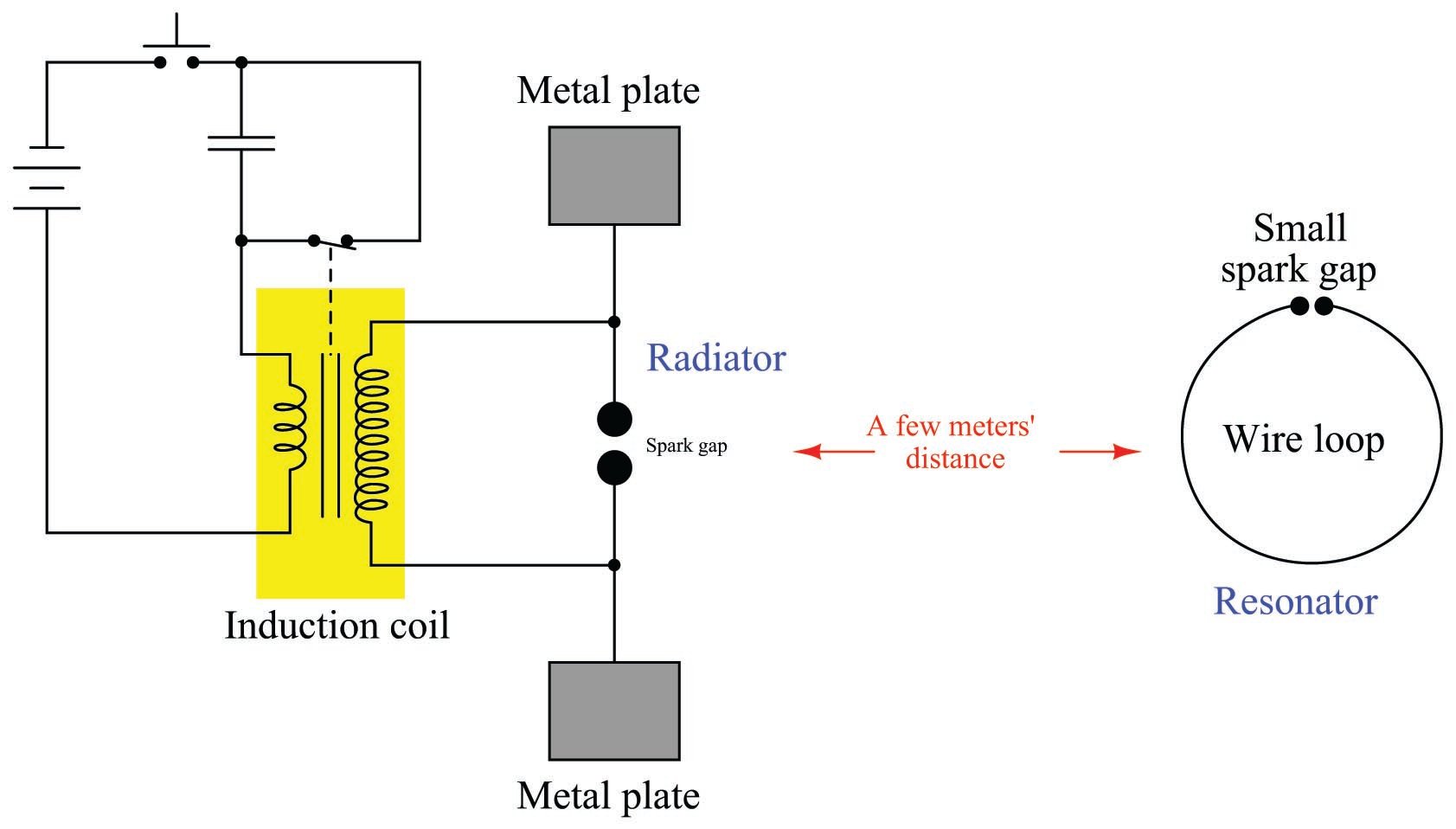 An “induction coil” (a buzzing device constructed of a self-interrupting relay and step-up transformer winding to generate a continuous pulsing waveform of high voltage) provided an extremely noisy (i.e. frequency-rich) AC signal to the radiator, while a spark gap at the resonator provided indication that the electromagnetic waves were captured and converted into voltage by the resonator wire.

The prototypical antenna shown earlier – with two wires oriented 180\(^{o}\) from each other – operates best at a wavelength twice as long as the total length of wire. 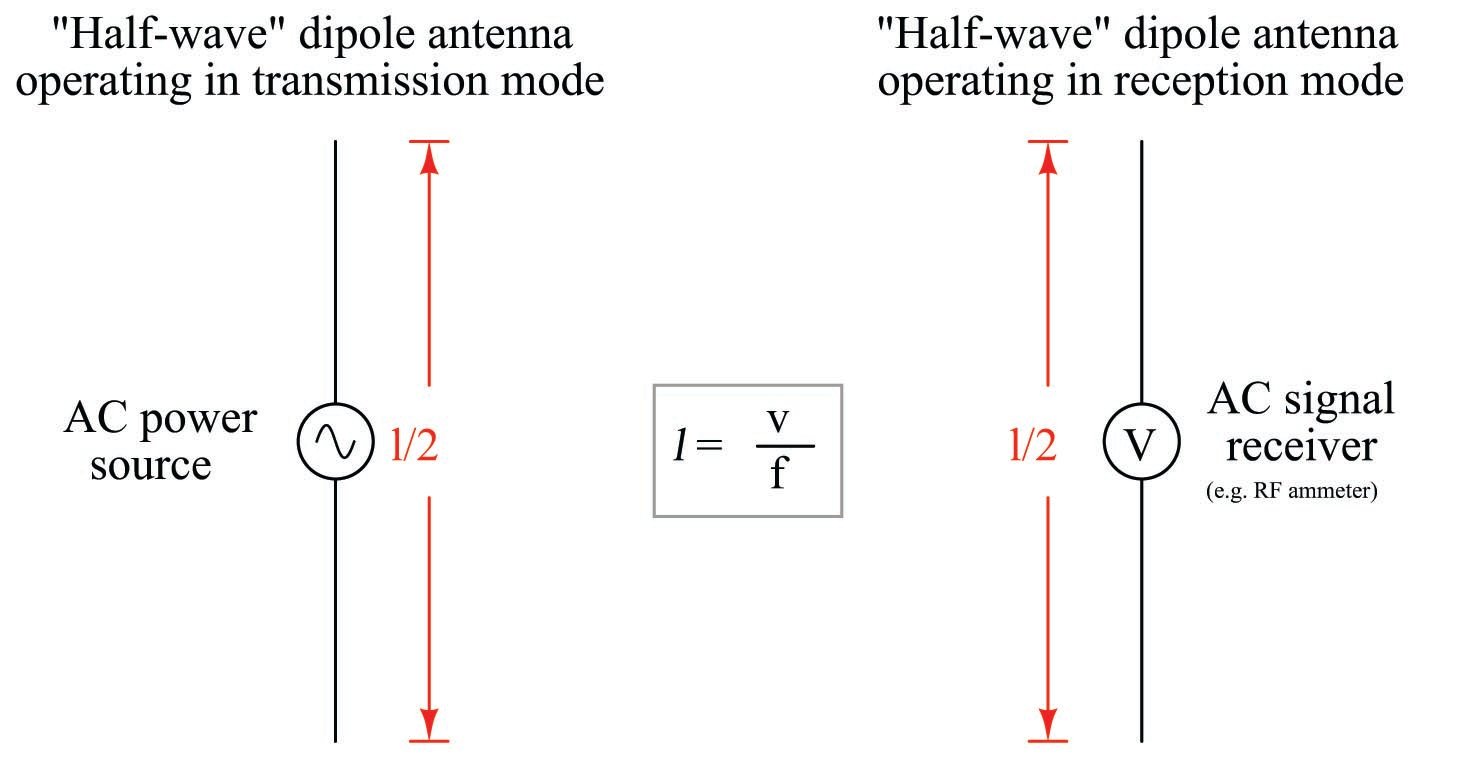 A “half-wave” dipole antenna with a total length of 5 meters will radiate optimally at a frequency of 30 MHz, given that the velocity of electromagnetic waves in open space is approximately \(3 \times 10^8\) meters per second. This same antenna will also effectively resonate at any harmonic (integer multiple) of 30 MHz (e.g. 60 MHz, 90 MHz, 120 MHz, etc.) just as a transmission line is able to resonate at a fundamental frequency as well as any harmonic thereof.

A popular variation on the theme of the half-wave dipole antenna is the so-called quarter-wave or “whip” antenna, which is exactly what you might think it is: one-half of a half-wave antenna. Instead of two wires pointed away from each other, we substitute an earth-ground connection for one of the wires:

Quarter-wave antennas tend to be less effective than half-wave antennas, but are usually much more convenient to construct for real applications.

Another factor affecting antenna performance is the orientation of the receiving antenna with respect to the transmitting antenna. Antenna conductors should be parallel to each other in order to maximize reception, in order that the electric and magnetic fields emanating from the wires of the transmitting antenna will “link” properly with the wires of the receiving antenna(s). If the goal is optimum communication in any direction (omnidirectionality), dipole and whip antennas should be arranged vertically so that all antenna conductors will be parallel to each other regardless of their geographic location.

Omnidirectionality may seem like a universally good trait for any antenna: to be able to transmit and receive electromagnetic waves equally well in any direction. However, there are good reasons for wanting directionality in an antenna. One reason is for greater security: perhaps you have an application where you do not wish to broadcast information in all directions, where anyone at all could receive that information. In that case, the best antennas to use would be those that work best in one direction and one direction only, with transmitting and receiving antenna pairs pointed directly at each other.

Another reason for antenna directionality is improved reception. As noted before, the AC signal received at an antenna is very small, typically on the order of microvolts. Since electromagnetic radiation tends to “spread” as it travels, becoming weaker with distance from the transmitting antenna, long-range radio communication benefits from increased sensitivity. A transmitting antenna that is directional will focus more of its power in one direction than in others, resulting in less “wasted” power radiated in unwanted directions. Likewise, a receiving antenna that is directional does a better job of “collecting” the electromagnetic energy it receives from that direction (as well as ignoring electromagnetic waves coming from other directions).

A simple yet highly effective antenna design for directional transmission and reception is the Yagi, named after its inventor. A Yagi is based on a half-wave dipole element surrounded by one or more wires longer than \(\lambda/2\) to the rear (called “reflectors”) and one or more wires shorter than \(\lambda/2\) to the front (called “directors”). The terms “reflector” and “director” are quite apt, describing their interaction with electromagnetic waves from the perspective of the dipole: reflectors reflect the waves, while directors direct the waves. The result is an antenna array that is much more directional than a simple dipole: 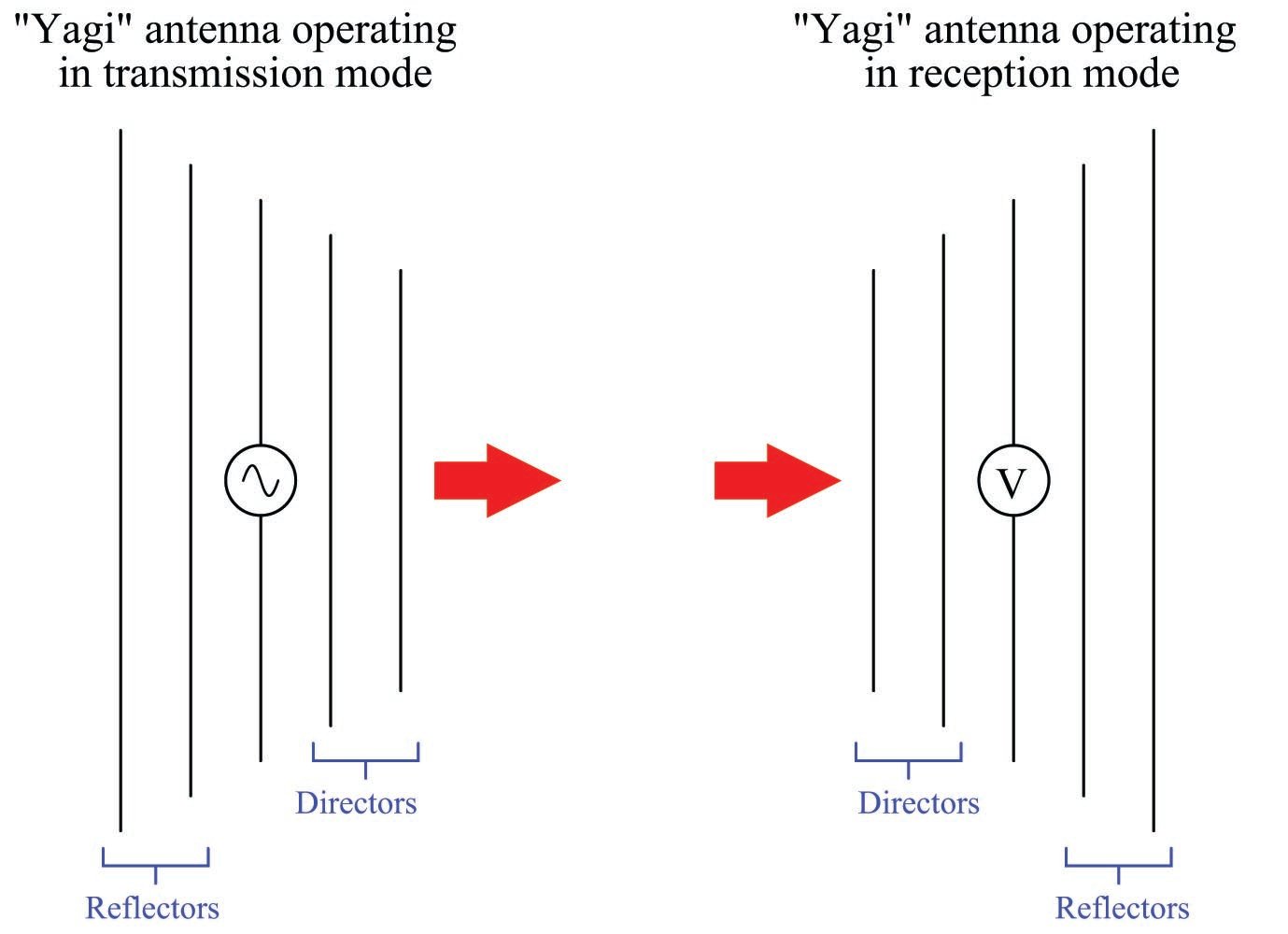 An example of a Yagi antenna used as part of a SCADA system is shown in this photograph, the antenna of course being the multi-element array in the upper-right corner: 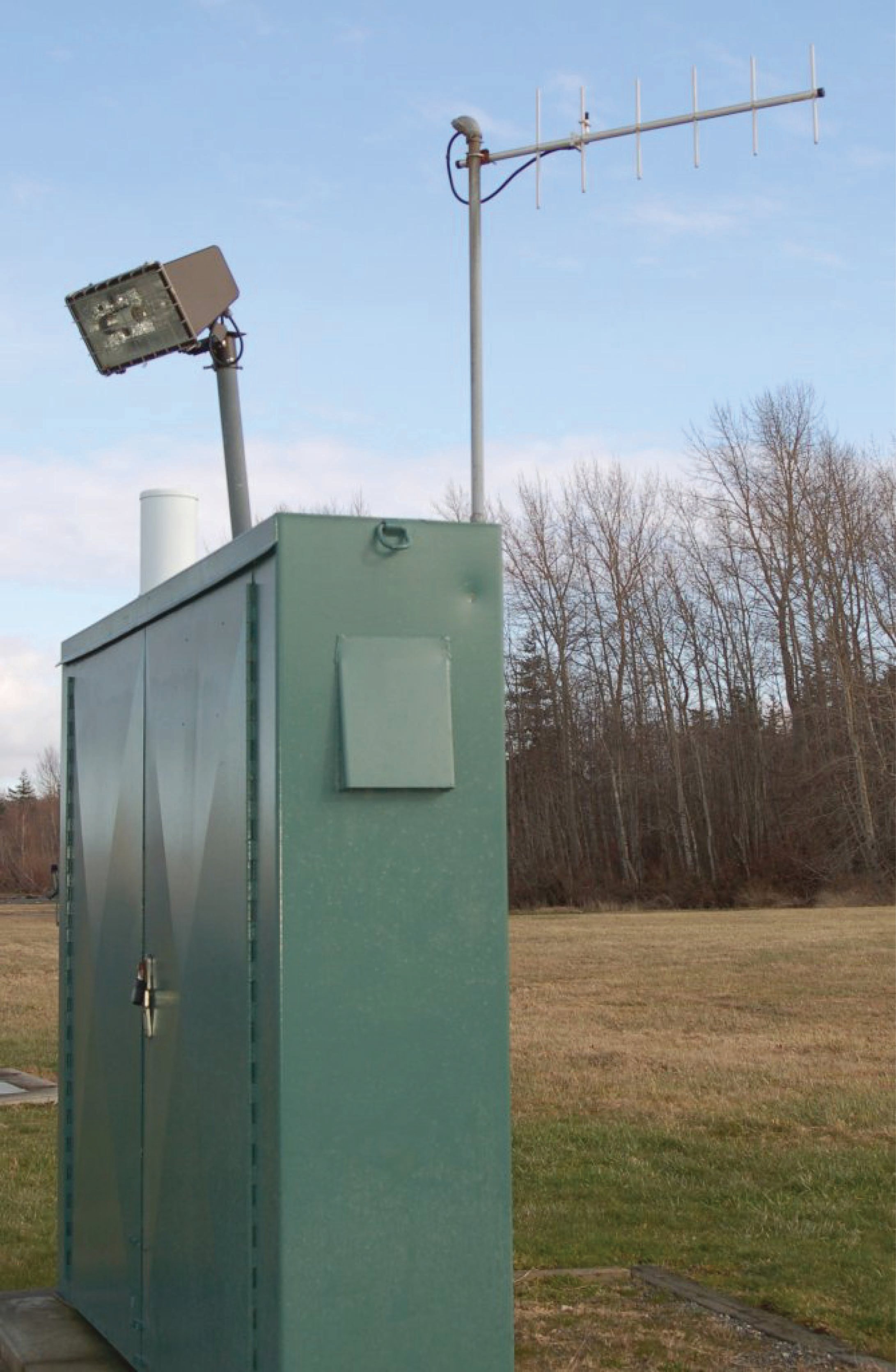 Another example of a highly directional antenna design is the parabolic dish, often used in microwave and satellite communications. This photograph shows two “dish” antennas, one open to the weather (right) and the other covered with a weather-proof diaphragm to keep the antenna elements protected (left): 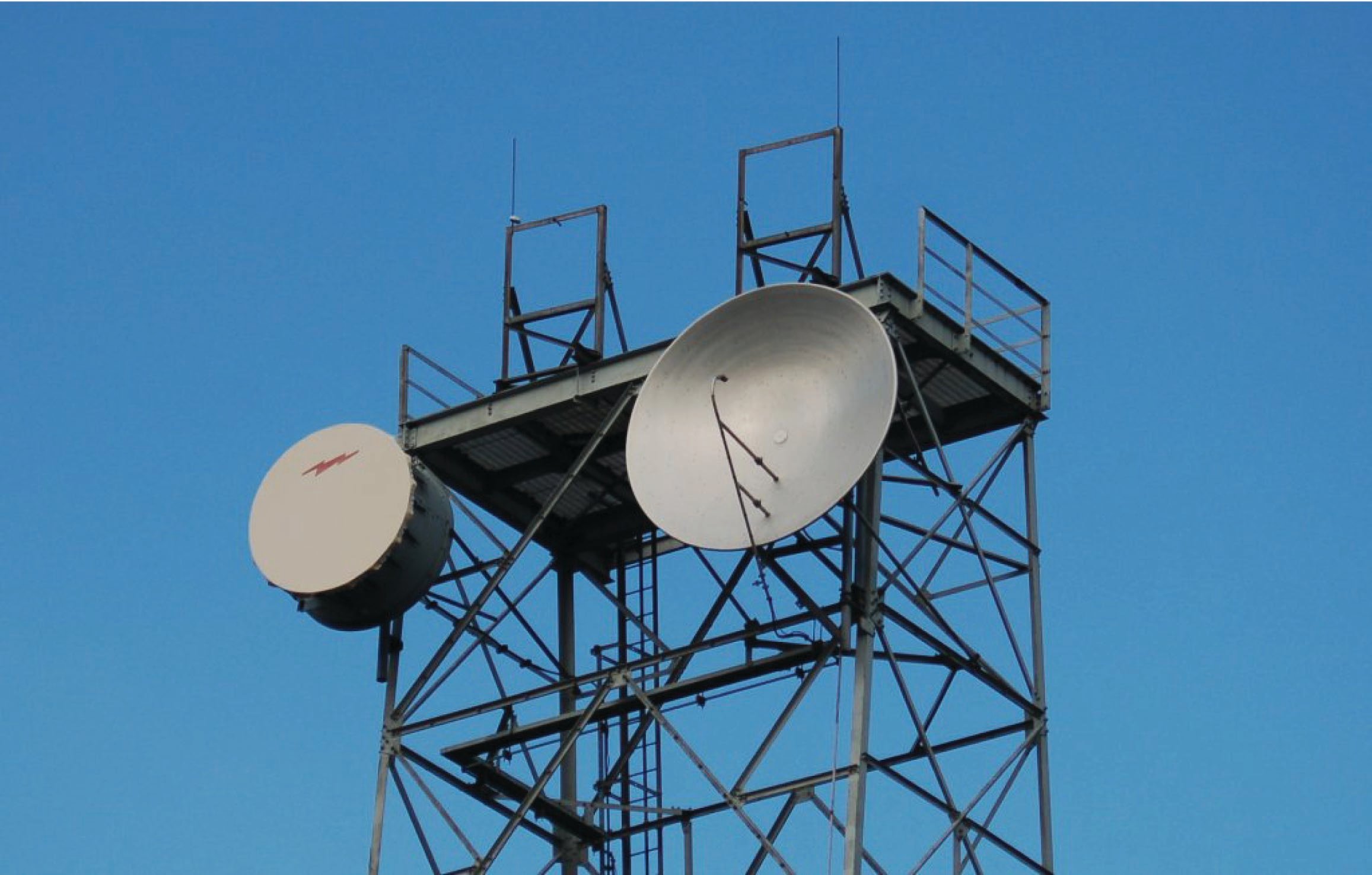 Some dish antennas use mesh or metal-tube reflectors rather than a solid parabolic reflector, as is the case in this next photograph: 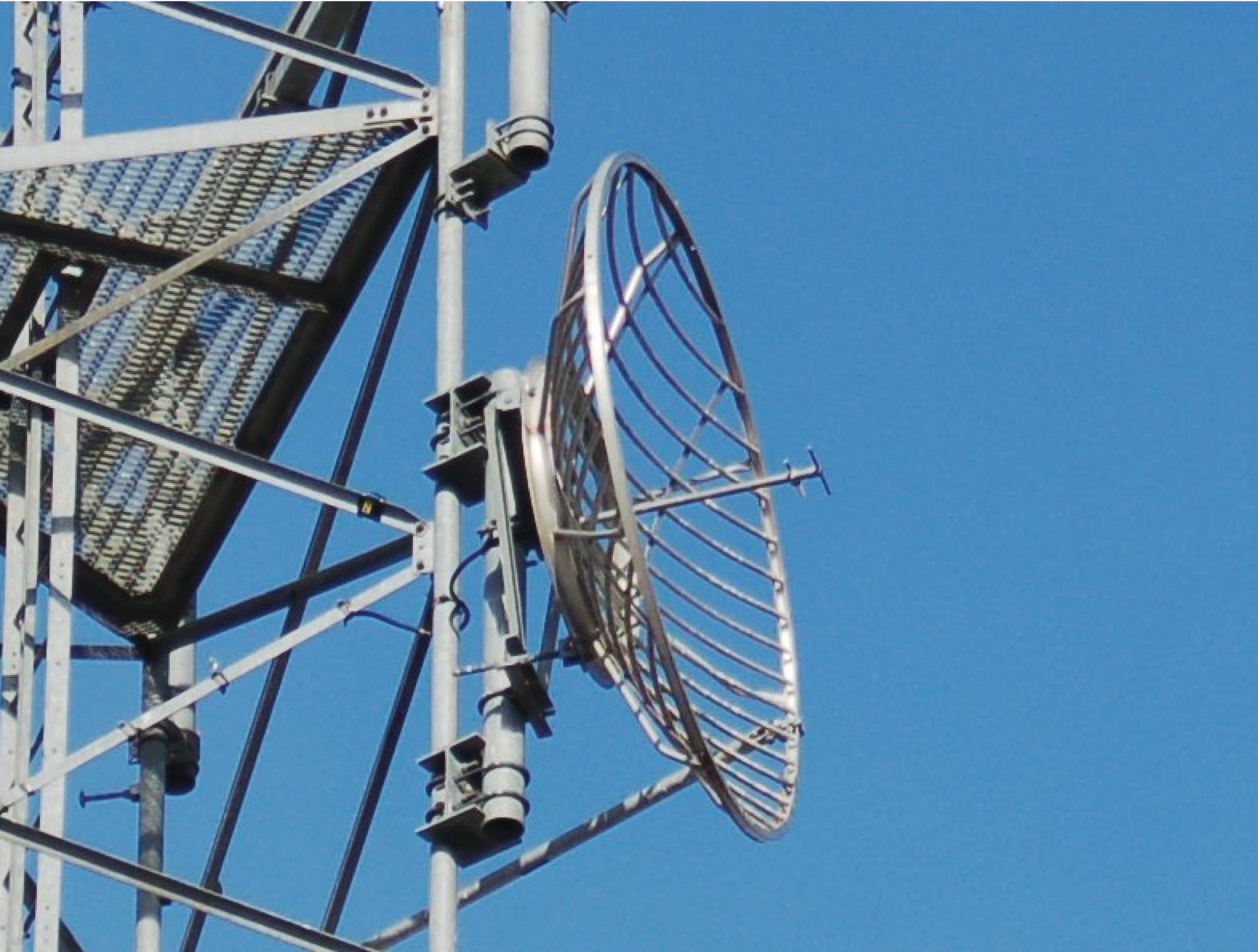