Who is Hawk Systems?

Hawk Measurement Systems (HAWK) manufactures level, position, and asset monitoring solutions. The company was founded in 1988 and has since won multiple awards in measurement technology.

Products developed by HAWK have been used to solve challenging measurement applications, including liquid and solid depth, uneven surfaces, murky fluids, and silo containers. Currently, HAWK has two manufacturing facilities (the USA and Australia), and its headquarters are found in Melbourne, Australia.

The new sensors are non-contact laser devices that utilize a transmitter and receiver to measure the distance between a reflective surface and the sensor. Packaged into a single unit, the device is pointed towards the surface measured. The system can detect the reflection and accurately determine the distance with an accuracy of <0.1% of the device's full range (20°C). The resolution of the new sensors is 10mm.

Both sensors can provide up to five readings per second. They also require a power supply of 24V DC and consume 100mA of current under normal conditions. The output of the devices is available in both USB and analog form. The analog output follows the standard 4-20 mA current loop.

The differences between the two sensor modules are found in their respective range, size, and aperture size. 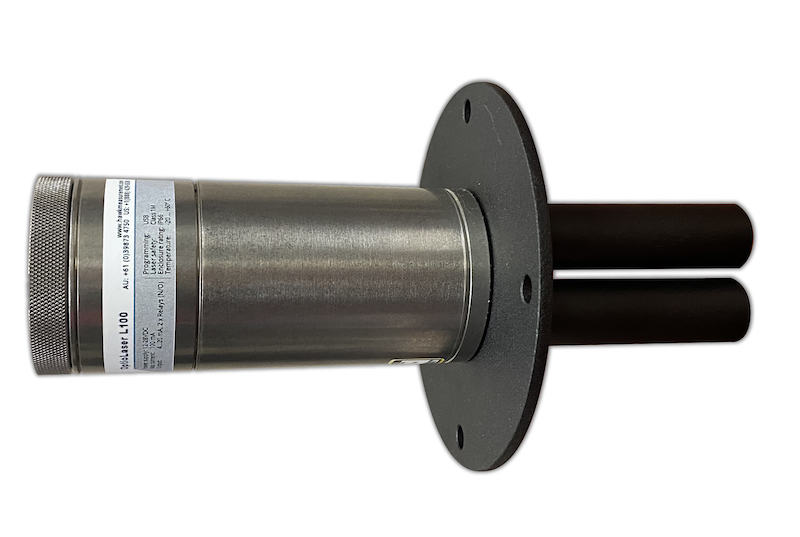 Many ranging technologies exist, including ultrasonic and float switches. In practice, it is best to mix multiple technologies to prevent reliance on a single measurement system.

Float switches can provide engineers with a basic method to determine the level of a solid or fluid in a tank. However, float switches can suffer from mechanical failure that can show false level results.

Mechanical float switches provide a rough level reading that may have a poor resolution. For example, a tank may have five discrete switches.

Ultrasonic ranging is a very similar method to laser ranging, where an ultrasonic pulse is sent from a transmitter, and a receiver picks up the echo. Using the equation "distance = speed x time," the distance between the transmitter and surface can be determined.

Ultrasonic methods only reliably operate on short ranges (up to a few meters), and as such, cannot be used in large tanks.

Laser-based rangers are most applicable when measuring large distances with a need for a high resolution. Lasers are also preferred as a laser can readily reflect off many surfaces, where compressible surfaces can easily absorb ultrasonic waves. While liquids are not compressible, their surface allows for the absorption of incoming sound waves.

If you find yourself in need of an accurate level meter in a large industrial tank, then the L100 and L200 may do the job as intended.