A synopsis of a recent control system replacement on replacing APACS with Controllogix. 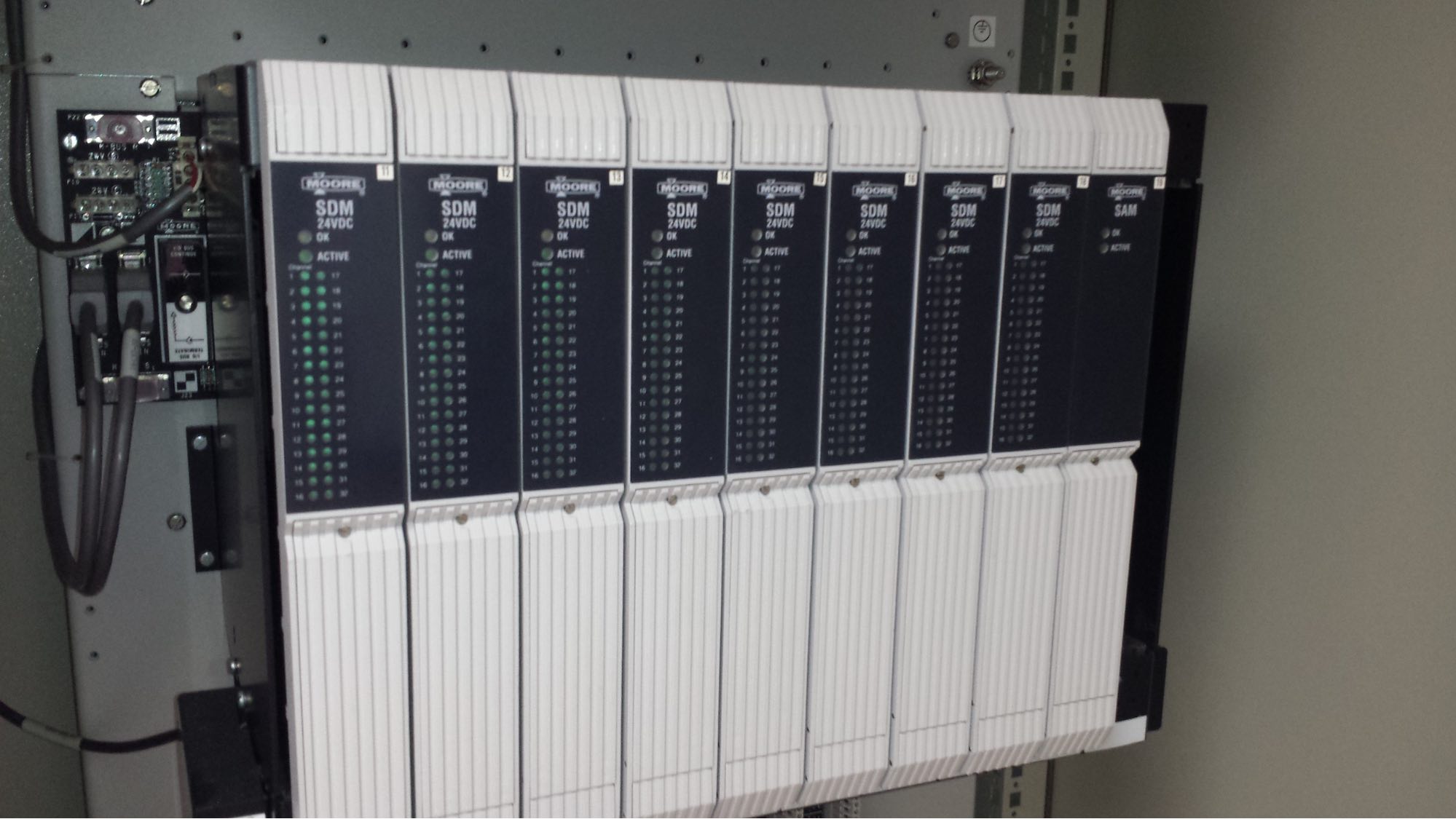 The Moore Products Company introduced APACS (Advanced Process Automation Control System) in 1991. In the late ’90s, APACS was chosen as the control system of choice for a national research facility’s advanced combustion research lab. The system was installed and would operate for more than 15 years before plans were made to replace the system. The downfall of the system began when Moore Products was acquired by Siemens in 2000, and in 2010 Siemens announced plans to phase out the APACS product line.

Product manufacturing was suspended around October 2011, but Siemens pledged to support all APACS goods and services through October 2020. It was getting apparent that APACS users could begin to face system expansion and maintenance problems as factory parts/exchanges became unavailable.

APACS provided robust reliable hardware coupled with a well-designed software suite that was difficult for the facility personnel to part with. As the facility aged, an abundance of spare parts were acquired and the system had plenty of room for expansion. The one key part of the control system that provided the most risk was the interface between the system processors and Microsoft Windows-based personal computer(s) which ran the control system software and HMI software.

As Microsoft suspended support for Windows XP in 2014, the drivers used for the interface cards became obsolete as there were no plans for a Windows 7 driver. In late 2014, it was decided to replace the facilities' existing control system with a new control system, utilizing Allen-Bradley’s Controllogix.

Several options for the retrofit were considered once the replacement control system was chosen. In each of the options, it was decided that the HMI, which was a rebranded version of Wonderware’s Intouch HMI, would remain as it was still supported by Windows 7 and taking on hardware and HMI replacement at the same time was more than the staff wanted to take on at the time.

The advantage of this method would have been that field wiring, which had evolved into somewhat of a mess over the years could be straightened out and all of the aging/obsolete hardware would be gone once the project was finished. The downside to this method would be that some of the existing wiring would be short and might not reach the new field terminations. 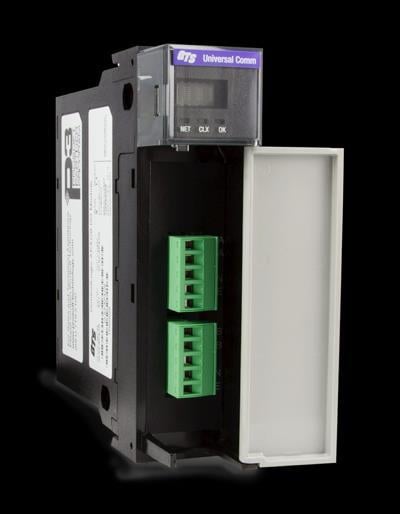 At the time, Prosoft Technology also was developing a Controllogix APACS I/O that would directly interface the existing APACS I/O, but it was not going to be available in time to be included in the control system design so it was never really considered. Either of these methods would have been somewhat more economical than other methods, but eventually, the aging hardware would still need to be replaced in the future. Since the facility had at least another 15 to 20-year life expectancy, it was decided not to use either of these methods. 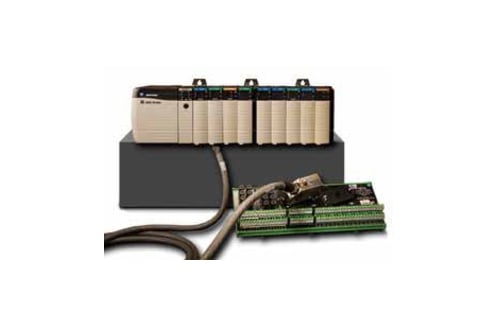 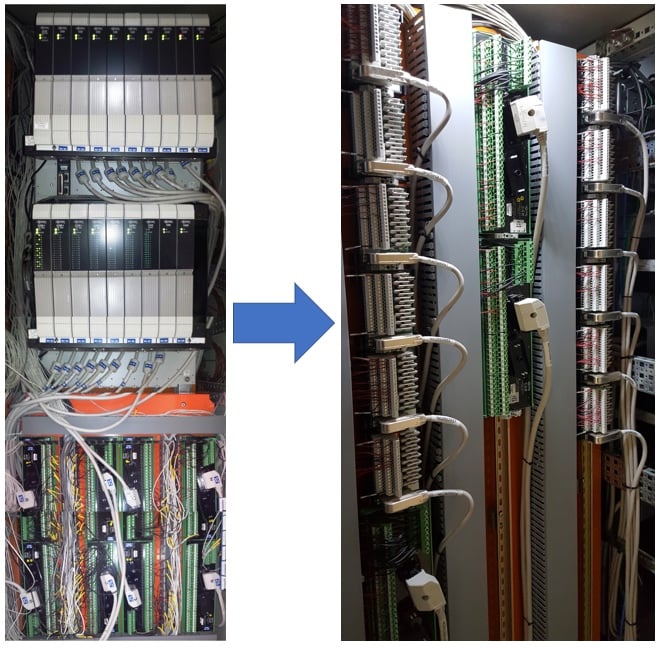 Before and after. Take advantage of the retrofit to clean up some untidy wiring.

Rockwell Automation actually offers new cables for purchase to interface between the Controllogix I/O and the MTAs, but the facility had an abundance of spare cables available that were custom fabricated by the electrical contractor to interface the new I/O with the existing field termination assemblies. This proved to be a good decision as the contractor did a fantastic job with the cables and provided a much more economical solution. 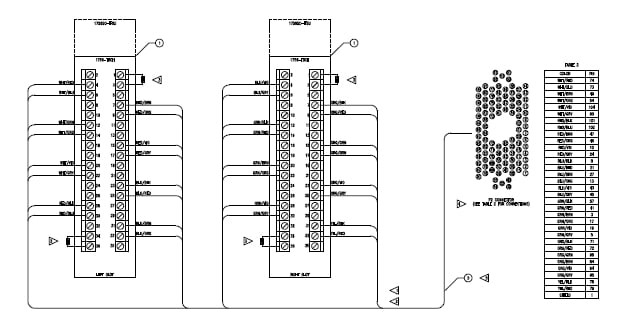 Custom cables were fabricated to connect to the existing termination units.

In almost all cases, the I/O density of the existing system modules and the Controllogix system modules did not match (i.e. 16 channel thermocouple input modules for APACS versus 8 channel thermocouple input modules for Controllogix). The I/O density mismatch was overcome by using the custom cables. For example, one cable would interface two thermocouples I/O modules with one existing thermocouple field termination assembly. The only I/O module type on the new system that did not have a direct interface option with the existing field termination assemblies was the analog current input module. 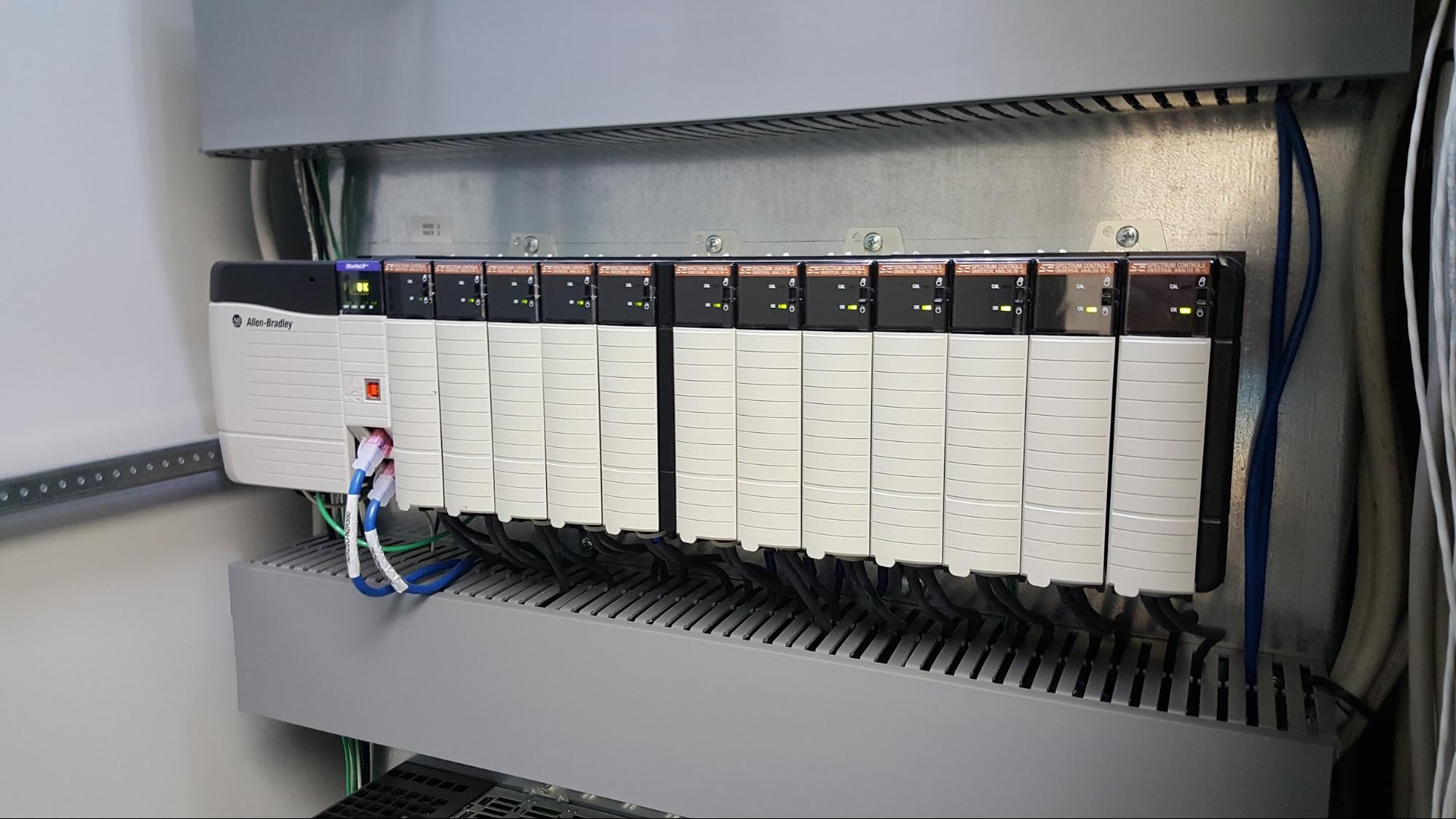 The new clean look of a recently installed system.

There are many details to this installation that were left out in an effort to keep this article concise. In a future article, I will go over the program logic conversion from APACS to Controllogix and provide some of the techniques used to convert the HMI tag database for use with Controllogix. I will go over the commissioning and trouble-shooting that was involved to get the project up and running and divulge future plans for the next phase of this project.

In the meantime, if there are any questions or further details on this retrofit, please post questions or comments to this article and I will be glad to try to answer as many questions as I can.