Honeywell recently entered a new partnership with the Texas Carbon Management Program Group (TxCMP) at The University of Texas at Austin (UT Austin). The collaboration will focus on advanced solvent technology designed to lower cost capture of carbon dioxide emissions from power plants and heavy industry.

As part of the licensing arrangement, Gary Rochelle, professor at the McKetta Department of Chemical Engineering and leader of TxCMP at UT Austin, will provide Honeywell with consulting services.

The Honeywell and UT Austin Partnership

The team created a second-generation amine scrubbing system, which can help “hard to abate” industries, such as steel, cement, chemical, coal, natural gas, and power. In other words, the technologies will create a new offering targeted at industrial plants to lower emissions generated from combustion flue gases in new or existing units.

According to the enterprises, the solution will also provide these sectors with an additional tool to help meet sustainability goals and regulatory requirements. The licensing agreement with Honeywell will enable the UT Austin team to commercially scale the technology and contribute substantially toward zero emissions efforts.

From a technical standpoint, UT Austin's patented solution works through an advanced solvent that can capture carbon dioxide at a lower cost and greater efficiency using smaller equipment. 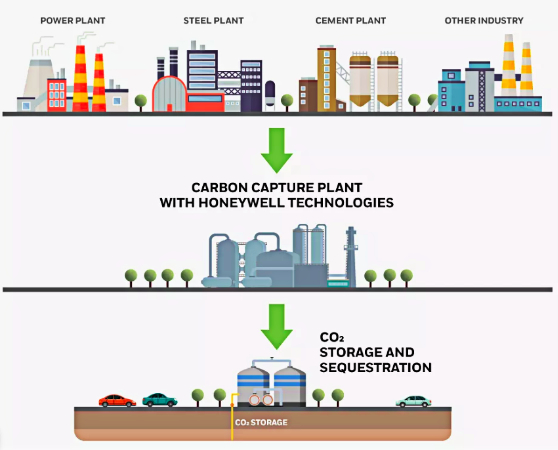 Data released by Honewell has shown that—for a typical power plant with a 650 MW capacity—applying advanced solvent carbon-capture technology could enable the capture of about 3.4 million tons of CO2 annually.

For context, the figure is roughly equivalent to removing 735,000 cars from the road each year, so the application of this technology could consequently create viable project economics today under current CO2 policy frameworks in North America and Europe.

In addition, the point source CO2 removal technology can either be retrofitted within existing infrastructures and plants or included as part of a novel installation, increasing further the opportunity for significant emissions reductions.

The news of its partnership with UT Austin comes months after Honeywell announced it would achieve carbon neutrality in its operations and facilities by 2035. Honeywell's current CO2 solutions process expertise is reportedly capturing 15 million tons per year of CO2, which is then used in storage/utilization applications. However, the company has confirmed it can capture 40 million tons per year via its worldwide projects.

As the world proactively seeks greenhouse gas emissions regulations, it is important to consider alternatives, such as carbon capture, for carbon-intensive industries. The licensing arrangement with UT Austin will aid Honeywell's carbon capture efforts.