When designing for safety-critical applications, devices must never behave in unpredictable ways, even if unpredictable events occur. For example, a circuit breaker must disconnect the power from an industrial system if a voltage, current, or power surge occurs. It doesn’t matter what has caused this event, nor does it matter if the circuit breaker is damaged—it must perform its function and remain in a predictable state.

Force-guided relays, also known as safety relays, are an example of a safety device that, under fault conditions, will remain in a known state. A force-guided relay has separate normally-open (NO) and normally-closed (NC) contacts, and all these contacts are connected to a singular actuator. Under normal conditions, the actuator moves back and forth, which connects and disconnects the various contacts.

However, if a fault condition occurs where one of the contacts welds, the welded contact prevents the armature from moving; therefore, the other contacts on the relay cannot change state. This prevents a NO and NC from both being closed simultaneously, and it makes it clearer to engineers which contact has failed.

Recently, Siemens announced the 3RQ1 force-guided relay series, designed for universal use mounted in a DIN rail enclosure. The relays are available in a wide range of voltages from 24 V to 240 V AC/DC, in various widths from 17.5 mm to 22.5 mm, making them narrow, and in a range of current and power capabilities. 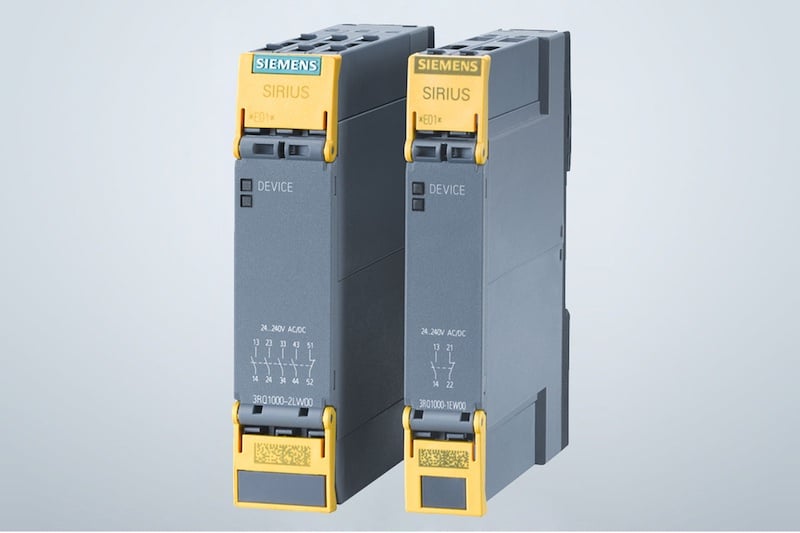 The Sirius 3RQ1 is designed to complete its Smart Infrastructure portfolio. Image used courtesy of Siemens

The 3RQ1 relay series is also certified for functional safety up to SIL 3 / PL e (IEC 61508 and ISO 13849). This means that the probability of failure on demand is ≥104 to <103 and has a risk reduction factor of 10,000 to 1,000. Furthermore, the use of force-guided contacts means that a safety system that checks the outputs of the relay can be used for diagnostic purposes, making it a system that can check the integrity of the load it is switching. The 3RQ1 holds multiple certifications, including CE, UL/CSA, EAC, and CCC.

First and foremost, while the relay holds certification for specific industries, it can be used as a general-purpose relay in safety-critical applications. For example, an industrial conveyor system may be used in an environment that could see increased risk to workers. As such, the use of the 3RQ1 can help create a power controller, which is reliable in operation and under fault conditions.

However, the leading industrial sectors targeted by the relay are railroad, signaling, elevators, and traffic lights. The relay’s ability to determine when it has undergone a fault, as well as the inability for two contacts to operate simultaneously, means signal systems should not fault. For example, a traffic light using such a relay should not turn on the red and green signals simultaneously. Another example would be an elevator: The door close mechanism and cable towing motor should not operate at the same time when using such a relay.

Overall, any application that involves two different tasks that must never operate at the same time can utilize the 3RQ1 force-guided contacts.