A fairly intuitive property of machinery is physical sound, but in the world of measurement tools, acoustic noise isn’t quite as common as most other properties including heat and vibration. Seven Bel is a company offering the Sound Scanner P132, effectively a ‘camera’, capable of visualizing sound. This sound scanner can be used to find noisy components that are either generating a nuisance noise that must be mitigated for safety (and sanity) or for diagnostic reasons. 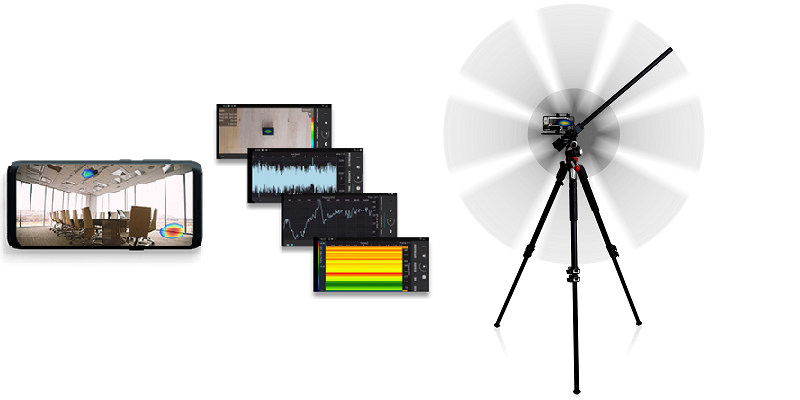 What is a Sound Camera?

A sound camera uses a microphone array to capture sound. Based on the difference in times and intensities of the sound as it reaches each microphone, the source of the sound can be located. This is a similar concept to how seismometers can triangulate the position of an earthquake, as the shockwave reaches each seismometer at a different time. With a sound camera, however, sensors can be located near a piece of equipment, and the data collection is quick enough to notice the small time delay between each microphone.

From there, software processes the time data and calculates a location, which can be displayed to an operator who may be troubleshooting a piece of equipment. Depending on the configuration, the sound camera may be able to subtract out “baseline” noise, or noise that is generated during normal operation, showing only the data for any new noises that develop.

In the field of electrical controls, it is quite common to use the term ‘noise’ in an ambiguous fashion, indicating both physical sound waves as well as electrical interference from inductive sources. Both can stem from, and can indicate, root causes of issues, so both of these ‘noise’ sources must be measured.

Seven Bel’s Sound Scanner P132 is a compact solution to a complex problem. Typical sound camera applications require many microphones. Some systems have more than 100, adding to the cost and the system complexity. The Sound Scanner uses a different approach. Instead of using 100 microphones, the sensor array has only a few microphones in a spinning apparatus. The position of the microphones is known at all times, meaning the same microphone can be used to find noise from several locations in a short amount of time. The P132 can be used to collect the data of 480 microphones based on this scheme.

Once the data is collected, it is sent to a server farm for processing, freeing up processor time on site. Instead of spending money on computers capable of performing this complex analysis, it is outsourced and sent back to the operator quickly. From there, the data is displayed in an intuitive “heat map” which shows where the trouble spots are located, acoustically.

The Seven Bel Sound Scanner P132 will find use in industrial and architectural applications. In industry and manufacturing, excess or unusual sounds often indicate a problem in machinery. Be it a worn bearing, or grease not reaching a specific area, these sounds can be collected by this system to schedule future maintenance.

In a sample project, the sound camera playback monitor pinpoints the sources of noise from a small vacuum cleaner while the spinning arm passes in front of the view. Image courtesy of Seven Bel

In building and architecture, it can be difficult to locate problem sounds. While everyone has experienced a squeaky door hinge, locating a creak in the flooring, the hum of the electrical system, a rattle in a window, or the light whistle of a leak in the air handling system is much harder to isolate.

At first glance, these may not seem like a big deal, so often dismissed as “the building always makes that sound.” However, just like in industrial applications, these sounds may indicate bigger problems, such as small leaks, intermittent electrical connections, and so on. By detecting these problems, buildings can be made more energy-efficient. Speaking of sound, these well-designed buildings could create a new standard for indoor “peace and quiet.”