Learn about genetic operators and their role in future genetic algorithms for automation.

Welcome to Control Automation's series on genetic programming. You can check out the rest of the series below.

As we introduced in the last article, genetic programming is a method of utilizing genetic algorithms, themselves related to evolutionary algorithms.

Fitness proportionate reproduction simulates a form of Darwinian selection analogous to "survival of the fittest." Without selection pressure, no force would drive the population toward finding better solutions. For each generation, a predetermined fraction of the population is selected and copied to the next generation.

Selection is performed in the usual way and is typically roulette wheel selection or tournament selection.

Roulette wheel selection is analogous to conducting a lottery involving the entire population where each individual holds some number of lottery tickets. The number of tickets held by an individual is in direct proportion to the fitness of that individual.

Crossover is performed by using the selection operator to pick two-parent programs and then "mating" them.

First, a random node (locus) in each program tree is selected. Since a tree is a recursive structure, each node can be considered to be the root of some other tree, a subtree within its respective parent program tree.

Note that a tree may consist of a single node as is the case when a terminal node is selected. These subtrees are exchanged thus forming two, potentially new, offspring programs, as shown in Figure 1. 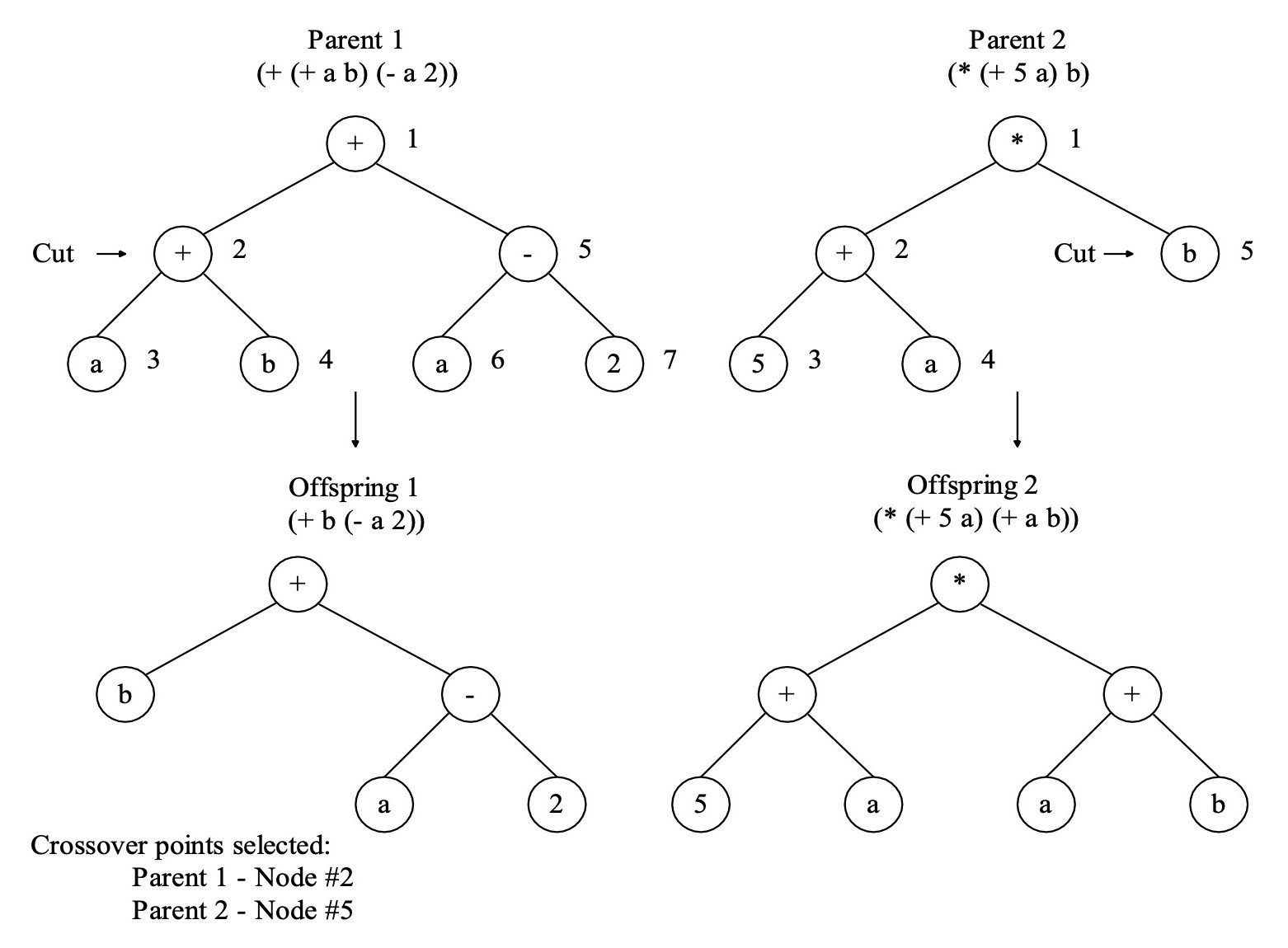 Crossover introduces novelty into the population. As in a genetic algorithm (GA), it is believed that over time, it becomes likely that an "offspring" program will contribute useful subtrees or "building blocks" (often referred to as "schema" in GA terminology) of genetic code that leads to increased fitness in their host programs and therefore will tend to propagate quickly.

The main benefit of mutation is to periodically inject new genetic material (functions and terminals) that may no longer be present in the current population. The value of mutation in genetic programming (GP) is arguable and many successful results have been obtained in its absence.

At first glance, it may seem highly improbable, if not impossible, to apply genetic operators to a computer program with the expectation that the result will be syntactically correct or otherwise yield any sort of meaningful result. This problem is addressed by enforcing a property called "closure," which ensures that the value produced by evaluating any function or terminal can be provided as an argument to any other function. The closure property holds for our exclusive or (XOR) problem above since all nodes consistently accept and return Boolean values. Some experimental work has been done to relinquish the need for closure through a modified set of genetic operators that preserves type compatibility.

An initial generation is created consisting of a population of randomly generated individuals. The genetic operators are applied to individuals within each generation until enough individuals are available to populate the next generation. Whenever a new individual is created, it is evaluated and a fitness measure is assigned to it. Obviously, if an individual is merely selected for reproduction, reevaluation of its fitness is unnecessary.

The process of applying genetic operators to a current population to produce a new population is repeated for successive generations until a specified termination condition is satisfied. The termination criterion for the run can be based upon finding an individual that has reached a target fitness measure or we may simply quit after a fixed number of generations.

Putting it all together, we obtain the algorithm outlined in Listing 1.

Listing 1. A high-level outline of the GP algorithm.

GP represents a future revolution in algorithm development. The above example algorithm helps introduce you to how this concept could change the way automation functions in the future.

In the next article, we'll discuss symbolic regression and take a look at an example of evolving a sorting program.