Sample sizes of chemical substances are often measured in moles. One mole of a substance is defined as a sample having \(6.022 \times 10^{23}\) (Avogadro’s number) molecules. This number is not arbitrary – it was chosen such that 1 mole of carbon-12 (\(6.022 \times 10^{23}\) individual \(^{12}\)C atoms together in one sample) would have a mass of exactly 12 grams. In other words, Avogadro’s number is a proportionality between an element’s atomic mass (measured in amu or Daltons) and the mass of a sample (measured in grams).

With Avogadro’s number defined as such, we may interpret any element’s atomic mass value as a conversion factor relating moles to grams. For example, if we look up the element potassium in a periodic table, we see that it has an average atomic mass of 39.0983 amu (39.0983 Daltons) as found in nature. This means 1 mole of naturally-occurring potassium atoms equals 39.0983 grams of mass. Likewise, 5 moles of potassium atoms will have a mass of 195.4915 grams. Note the use of the equivalence 1 mol potassium = 39.0983 g as a “unity fraction” in the following calculation, used to cancel the given unit of moles to yield an answer in the unit of grams:

When referring to liquid solutions, the concentration of a solute is often expressed as a molarity, defined as the number of moles of solute per liter of solution. Molarity is usually symbolized by an italicized capital letter M. It is important to bear in mind that the volume used to calculate molarity is that of the total solution (solute plus solvent) and not the solvent alone.

Suppose we had a solution of salt-water, comprised of 33.1 grams of table salt thoroughly mixed with pure water to make a total volume of 1.39 liters. In order to calculate the molarity of this solution, we first need to determine the equivalence between moles of salt and grams of salt. Since table salt is sodium chloride (NaCl), and we know the atomic masses of both sodium (23.0 amu) and chlorine (35.5 amu), we may easily calculate the mass of one mole of table salt:

Another way to state this is to say that table salt (sodium chloride, or NaCl) has a molecular weight of 58.5 amu (58.5 grams of mass per mole).

We may use this equivalence as a unity fraction to help us convert the number of grams of table salt per unit volume of solution into a molarity (moles of table salt molecules per liter):

Another common expression for the concentration of a solute in either a liquid or a gas solution is related to the concept of percent, expressing the presence of the solute as a ratio of how many “parts” of solute exist per “parts” of solution. Earth’s atmosphere, for example, contains approximately 20.9% oxygen gas by volume. This means that for every 100 molecules found in a sample of air, approximately 21 of those are oxygen molecules. When the concentration of a solute is very small, however, percent becomes an awkward unit of measurement. In such cases it is common to see low concentrations of solute expressed as parts per million (ppm) or even parts per billion (ppb). The volumetric concentration of methane gas in Earth’s atmosphere is a good example where parts-per-million is a more appropriate expression than percent: for every million molecules found in a sample of air, approximately 2 of them are methane molecules (i.e. methane has an atmospheric concentration of 2 ppm). As a percentage, this equates to only 0.0002%.

We may use parts-per-unit concentration values as unity fractions just like molecular weights and just like molarity values, to relate total solution quantity to solute quantity. For example, if we need to calculate the total mass of hydrogen gas in a compressed air cylinder storing 47000 standard cubic feet of air, we could multiply the total volume of that air sample (47000 SCF) by the volumetric concentration of hydrogen naturally found in Earth’s atmosphere which is 0.5 ppm:

Note how the units of “parts” and “air” cancel out to leave “SCF hydrogen”.

An important caveat when using percent, ppm, or ppb is that we must clearly define the “parts” proportion as either being volume or mass. The concentration of hydrogen gas in the atmosphere (0.5 ppm) was specified as a volumetric concentration, and so it is appropriate to use this 0.5 ppm figure to calculate a proportion of the 47000 SCF total volume. If, however, we were given a ppm mass concentration for hydrogen, we could only use that figure in conjunction with a total mass quantity for the air sample.

The following photograph illustrates this concept, showing the label on a calibration gas bottle containing a certified mixture of gases used to check the accuracy of air-safety monitoring instruments. Note the concentrations of each gas type within the mixture – some expressed in percent, others in ppm – and how the label states “MOLE %” in the upper-right corner using large bold print to let you know the concentration values refer to molar quantities (e.g. 18% oxygen means 18% of the molecules contained in this bottle are oxygen molecules), which for gases closely corresponds to volumetric quantity rather than mass: 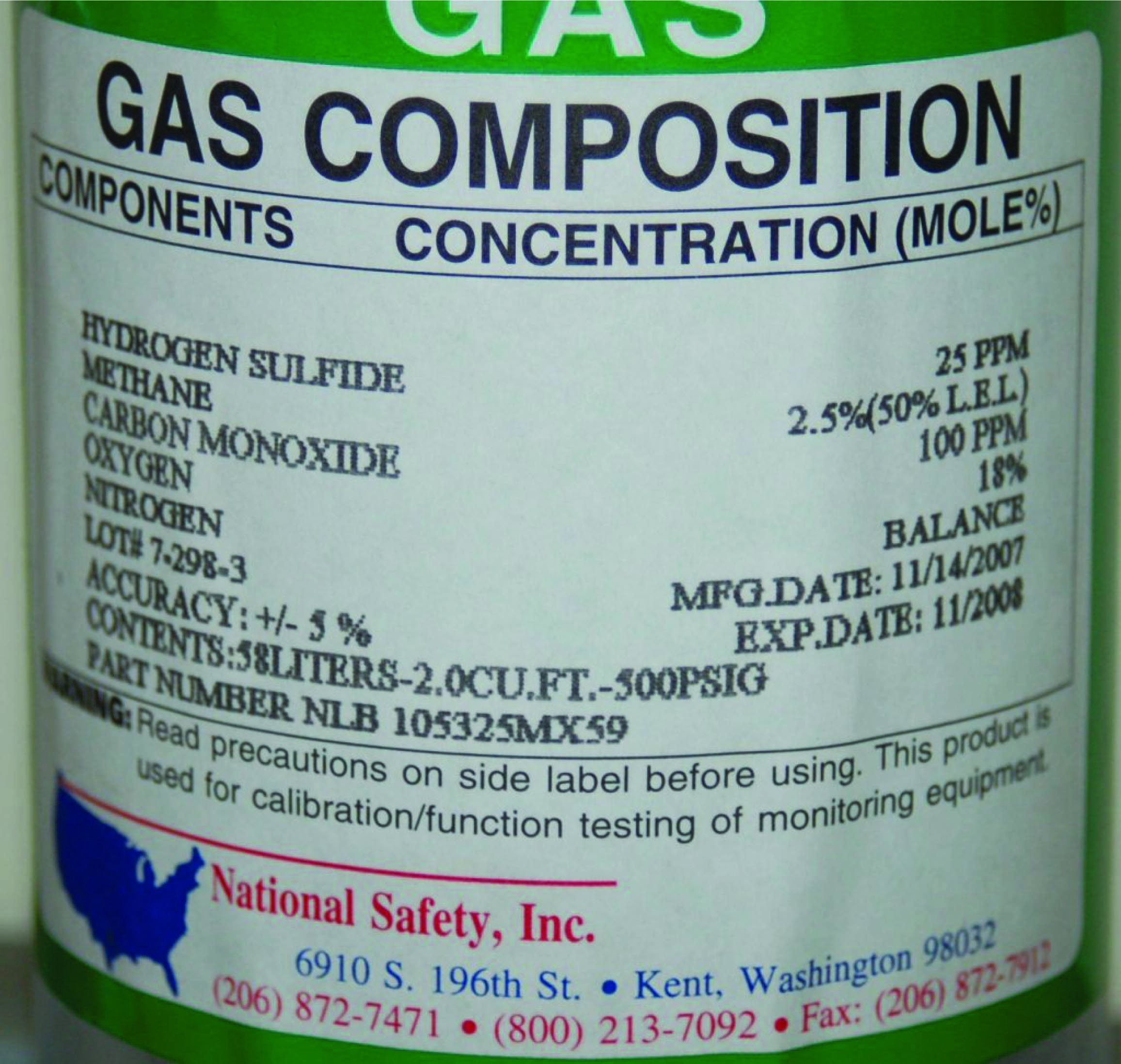