Given the ability of pressurized fluids to transmit force over long distances, it is not surprising that many practical “fluid power systems” have been built using the fluid as a mechanical power-conducting media. Fluid systems may be broadly grouped into pneumatic (, usually air) and hydraulic (, usually oil).

Although there is no particular reason why a fluid power system must be discrete and not continuous, the majority of fluid power systems operate in an on/off control mode rather than throttling, which is why this subject is covered in the “Discrete Control Elements” chapter. 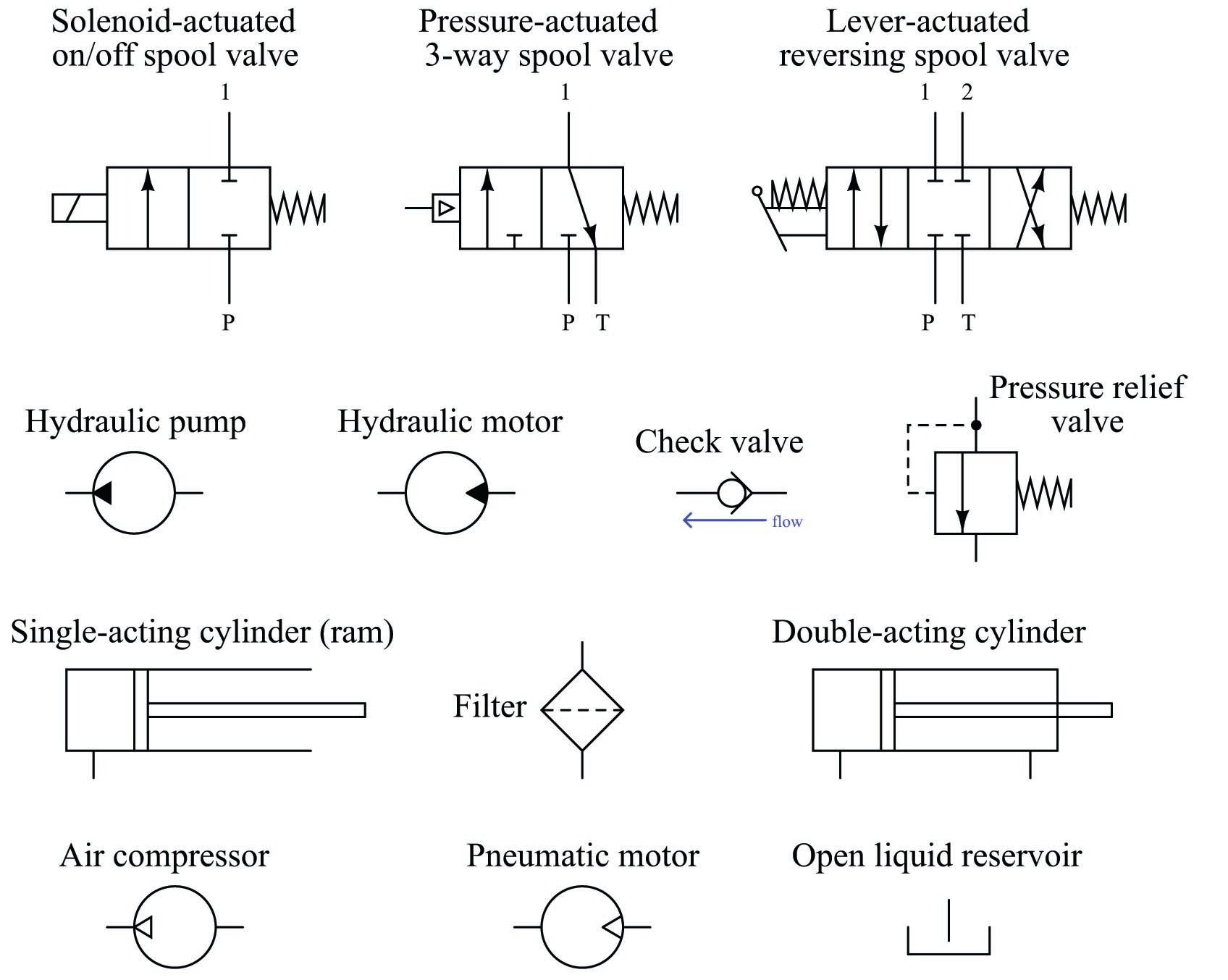 Many of these symbols are self-explanatory, especially the pumps, motors, and cylinders. What seems to cause the most confusion for people new to this symbology is the spool valve symbols. A “spool” valve is a special type of flow-directing valve used in pneumatic and hydraulic systems to direct the pressurized fluid to different locations. The symbology for a spool valve is a set of boxes, each box containing arrows or other symbols showing the intended direction(s) for the fluid’s travel. Take for instance this pneumatic reversing cylinder control system: 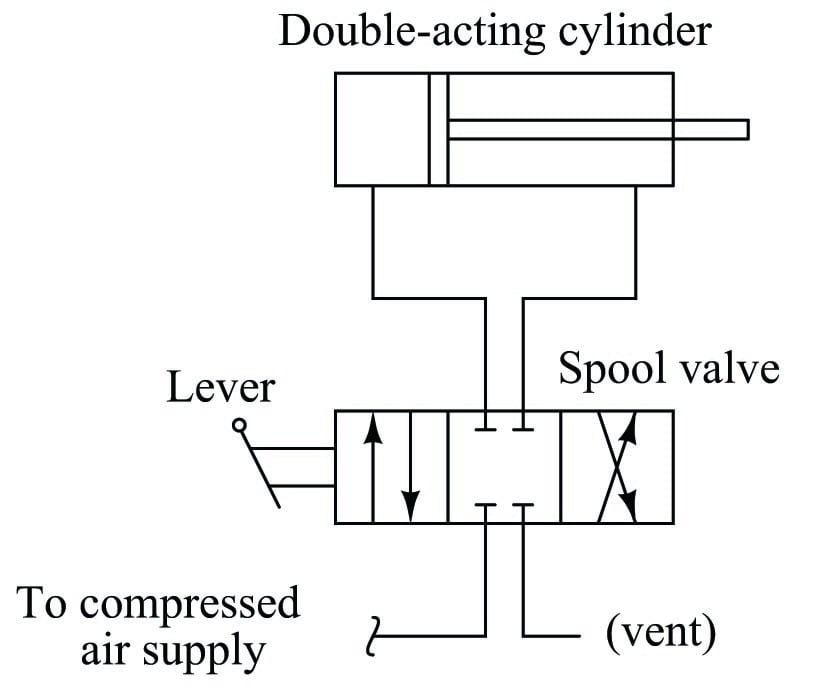 The proper way to interpret a spool valve symbol is to see only one “box” active at any given time. As the actuator (in this case, a hand-actuated lever) is moved one way or the other, the boxes “shift” laterally to redirect the flow of fluid from the source to load. 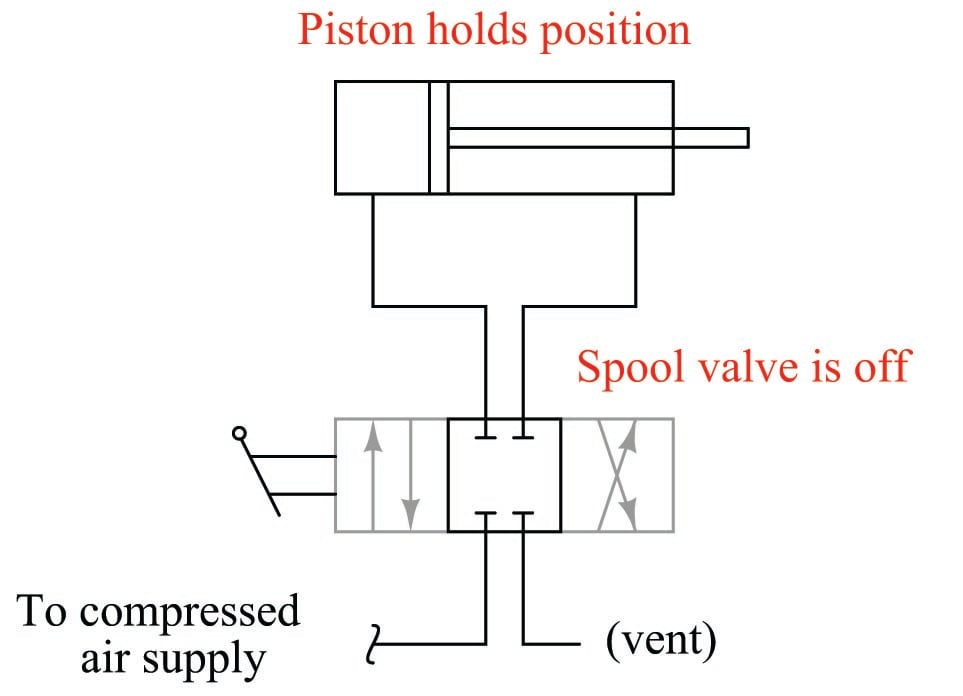 If the spool valve is actuated in one direction, the spool piece inside the valve assembly shifts, directing compressed air to one side of the cylinder while venting air from the other side. This is shown in the following diagram by shifting the boxes to one side, lining up the “active” box with the cylinder and air supply/vent connections: 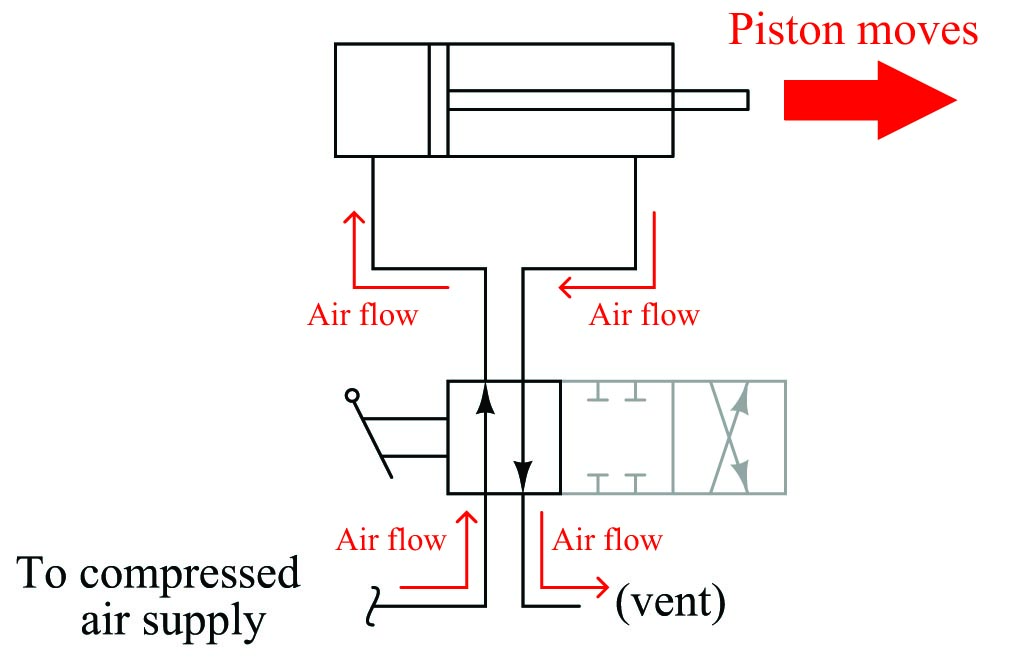 If the spool valve is actuated in the other direction, the spool piece inside the valve assembly shifts again, switching the directions of airflow to and from the cylinder. Compressed air still flows from the supply to the vent, but the direction within the cylinder is reversed. This causes the piston to reverse its mechanical travel: 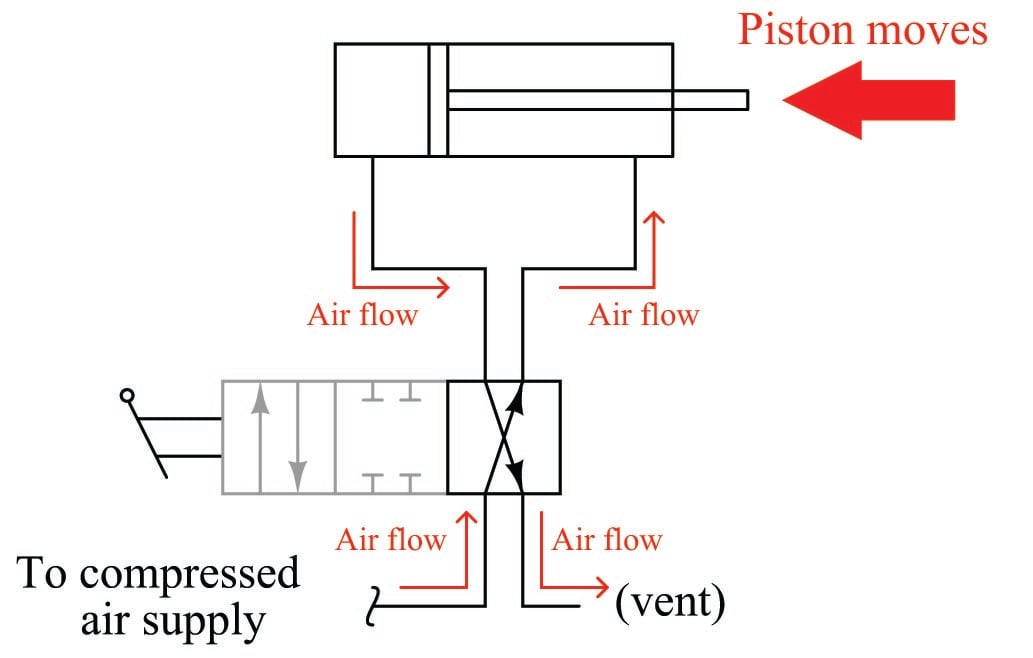 Note that the boxes in a spool valve symbol are never shifted or grayed-out in color like this to represent the valve’s state in a real fluid power diagram. The previous illustrations were drawn this way only as an aid to your understanding, teaching you how to interpret the meaning of the symbols when you see them in real fluid power diagrams. Like electrical switches represented in schematic diagrams, spool valve symbols are always drawn with the boxes aligned in their “resting” states, and with all portions identically colored. 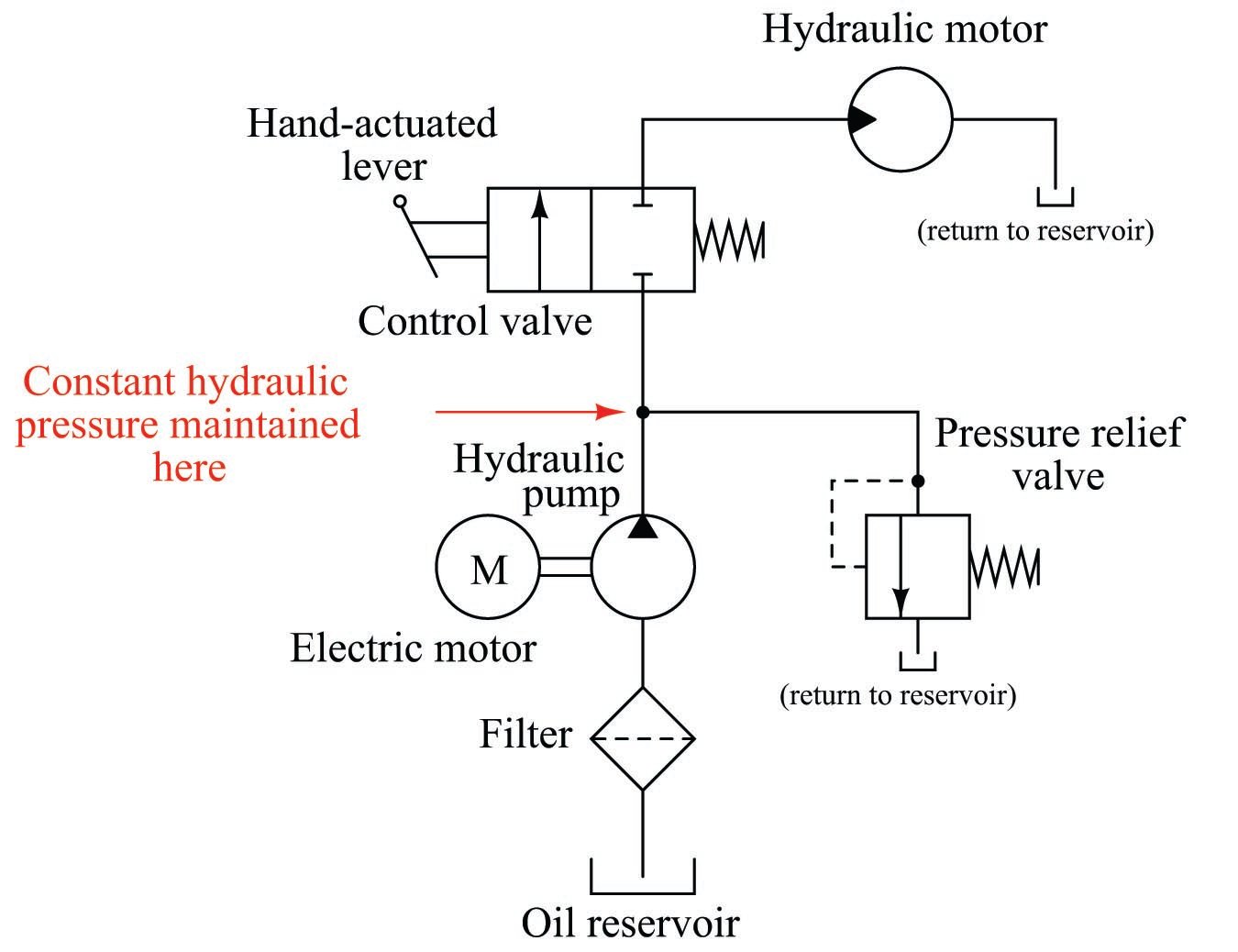 Note the placement of the pressure relief valve: it is a shunt regulator, bleeding excess pressure from the discharge of the hydraulic pump back to the reservoir. A “shunt” regulator is necessary because hydraulic pumps are positive displacement, meaning they discharge a fixed volume of fluid with every revolution of the shaft. If the discharge of a positive-displacement pump is blocked (as it would be if the spool valve were placed in its default “off” position, with no shunt regulator to bleed pressure back to the reservoir), it will mechanically “lock” and refuse to turn. This would overload the electric motor coupled to the pump, if not for the pressure regulating valve providing an alternative route for oil to flow back to the reservoir. This shunt regulator allows the pump to discharge a fixed rate of oil flow (for a constant electric motor speed) under all hydraulic operating conditions.

If we connect the variable-displacement mechanism of such a hydraulic pump to a pressure-sensing element such as a bellows, in a way where the pump senses its own discharge pressure and adjusts its volumetric output accordingly, we will have a pressure-regulating hydraulic system that not only prevents the pump from “locking” when the spool valve turns off, but also saves energy by not circulating pressurized oil all the time: 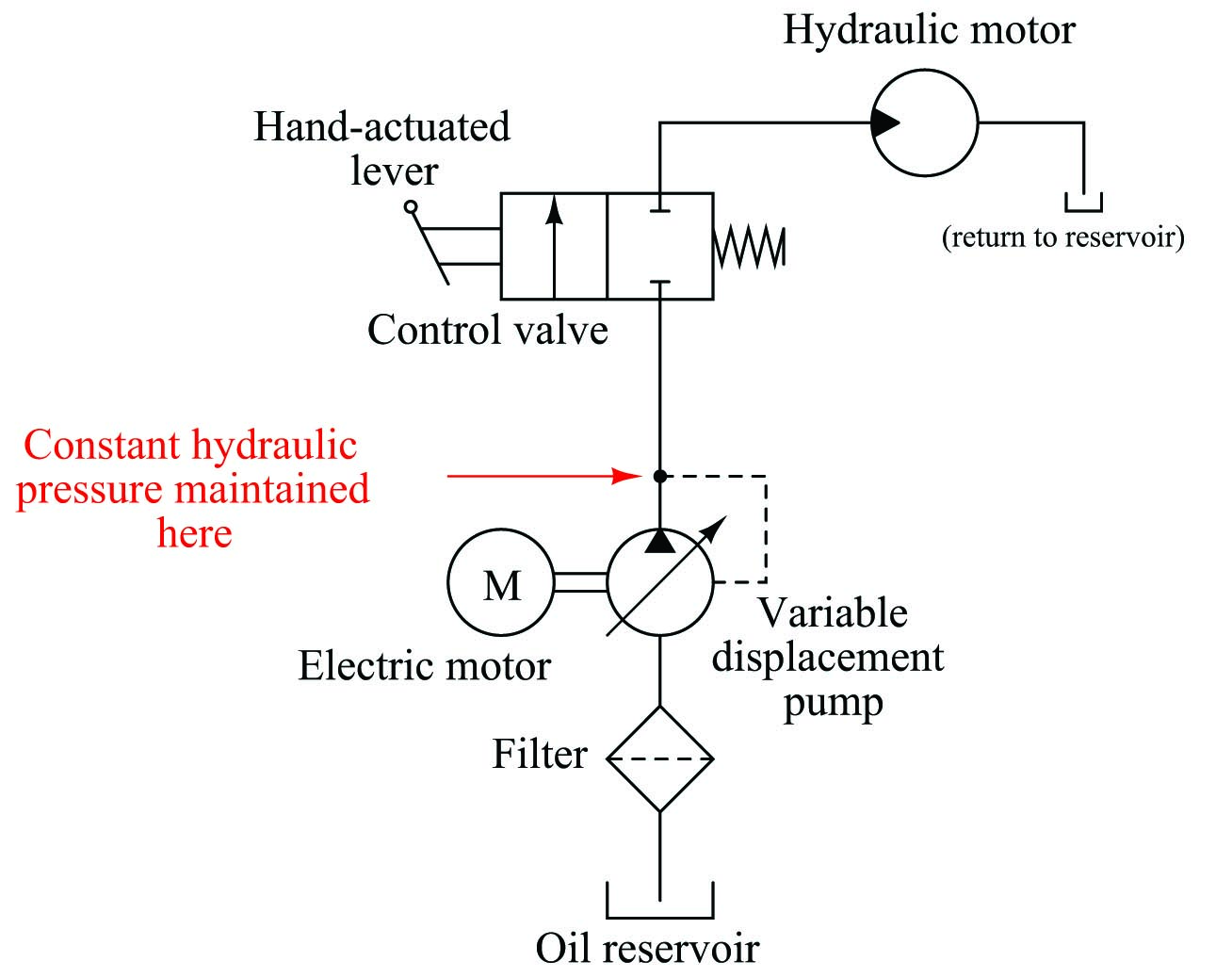 Note the placement of a filter at the inlet of the pump in all hydraulic systems. Filtration is an absolute essential for any hydraulic system, given the extremely tight dimensional tolerances of components inside pumps, motors, spool valves, and cylinders. Even very small concentrations of particulate impurities in the hydraulic fluid may drastically shorten the life of these precision-machined components.

Hydraulic fluid also acts as a heat-transfer medium, and as such must be kept cool enough to prevent thermal damage to components. Large hydraulic systems are equipped with coolers, which are just heat exchangers designed to extract heat energy from the fluid and transfer it to either cooling water or ambient air. Small hydraulic systems dissipate heat at a fast enough rate through their components that coolers are often unnecessary.

An interior view of a simple “2-way” spool valve such as that used in the hydraulic motor system previously examined reveals why cleanliness and temperature stability are important. The spool valve is shown here in both positions, with its accompanying schematic symbol: 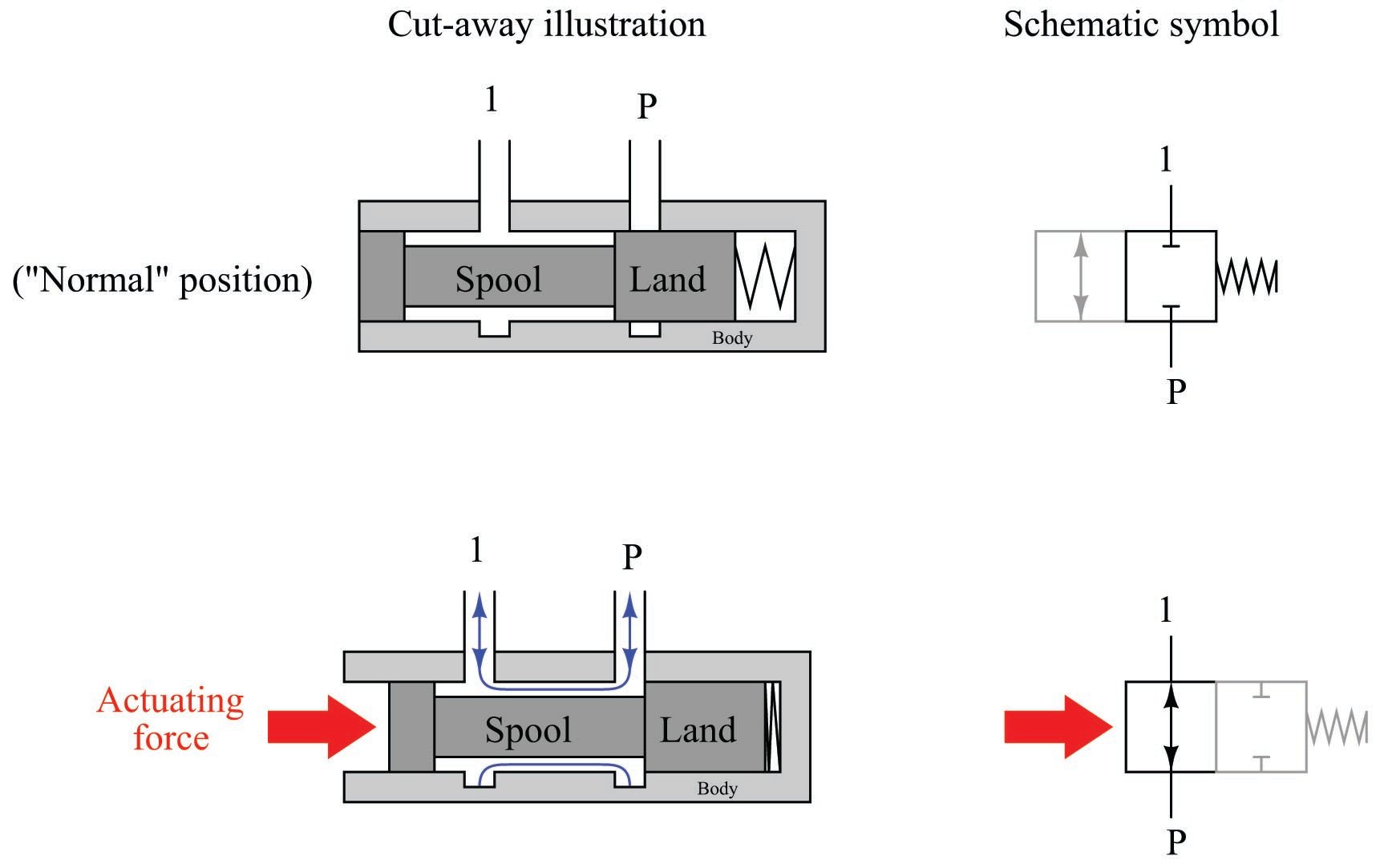 Pneumatic fluid power systems require cleanliness as well since any particulate contamination in the air will likewise cause undue wear in the close-tolerance compressors, motors, valves, and cylinders. Unlike hydraulic oil, compressed air is not a natural lubricant, which means many pneumatic power devices benefit from a small concentration of oil vapor in the air. Pneumatic “oilers” designed to introduce lubricating oil into a flowing air stream are generally located very near the point of use (e.g. the motor or the cylinder) to ensure the oil does not condense and “settle” in the air piping.

Fluid power systems, in general, tend to be inefficient, requiring much more energy input to the fluid than what is extracted at the points of use. When large amounts of energy need to be transmitted over long distances, electricity is a more practical medium for the task. However, fluid power systems enjoy certain advantages over electric power, a few of which are listed here:

Another important consideration for fluid power systems is the ongoing maintenance work they require for reliable operation. Hydraulic power systems will suffer rapid wear if the hydraulic oil is not clean and chemically stable. The fluid in a hydraulic system not only transmits mechanical power, but it also lubricates and stabilizes the temperature of components as they transfer that power between different forms. Regular filter changes and oil changes (especially if the fluid is subject to contamination from the process) are necessary for the long service life of any hydraulic system.

Pneumatic (instrument air) systems must be free of water vapor and particulate contamination for much the same reason. Water is perhaps the most common contaminant in instrument air systems, causing corrosion of metal components and subsequent clogging of orifices. Special devices called air dryers installed in instrument air systems to use solid materials called desiccants to absorb water entrained in the compressed air. The desiccant material is “regenerated” by the dryer mechanism on a regular cycle, but must be periodically replaced when its water-absorbing ability wanes. 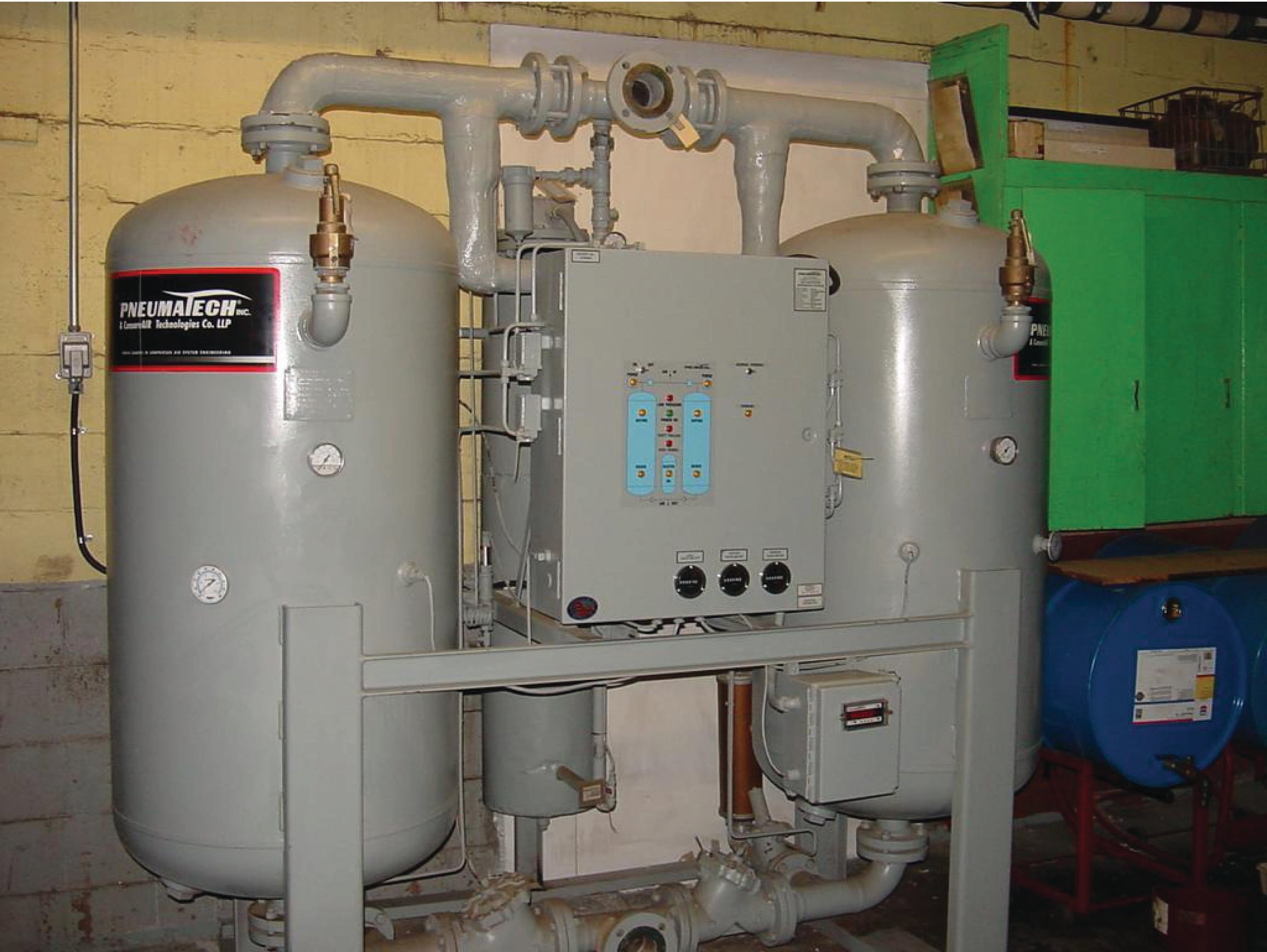 A valving system directs the main flow of compressed air through one of these desiccant chambers at a time, allowing the desiccant to absorb water vapor in the air. Meanwhile, the unused chamber is purged of its collected water by venting low-pressure air through it to the atmosphere. An electronic timer unit (or PLC) controls the cycling of this valve system to ensure adequate drying and maximized desiccant service life.

A simple way to help extract water from an instrument air system is an accessory called a water trap, usually found on air pressure regulators. The following photograph shows a Fisher pneumatic regulator equipped with such a trap on the bottom: 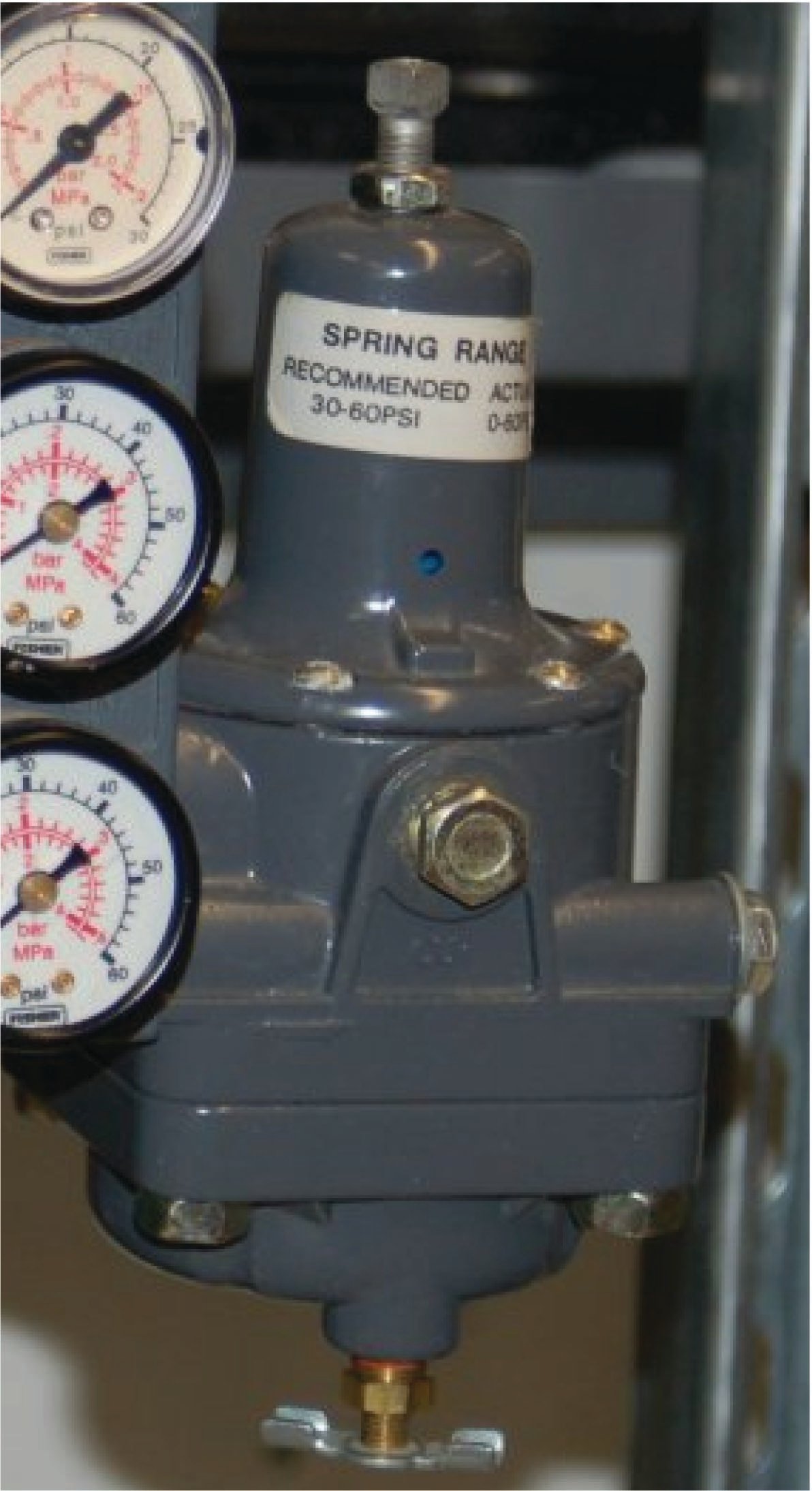 Another way to help minimize the amount of water reaching pneumatic devices is to properly orient all connections to the main air pipe (called a header). Ideally, each instrument air tap coming off a header should do so on the top of the header, not the bottom. This way, collected condensation inside the header will not go directly to the points of use, but rather will drain downhill to the lowest point in the header where a drain valve may be placed.

This next photograph shows an incorrect installation, where the air is drawn off the bottom of the main header line: 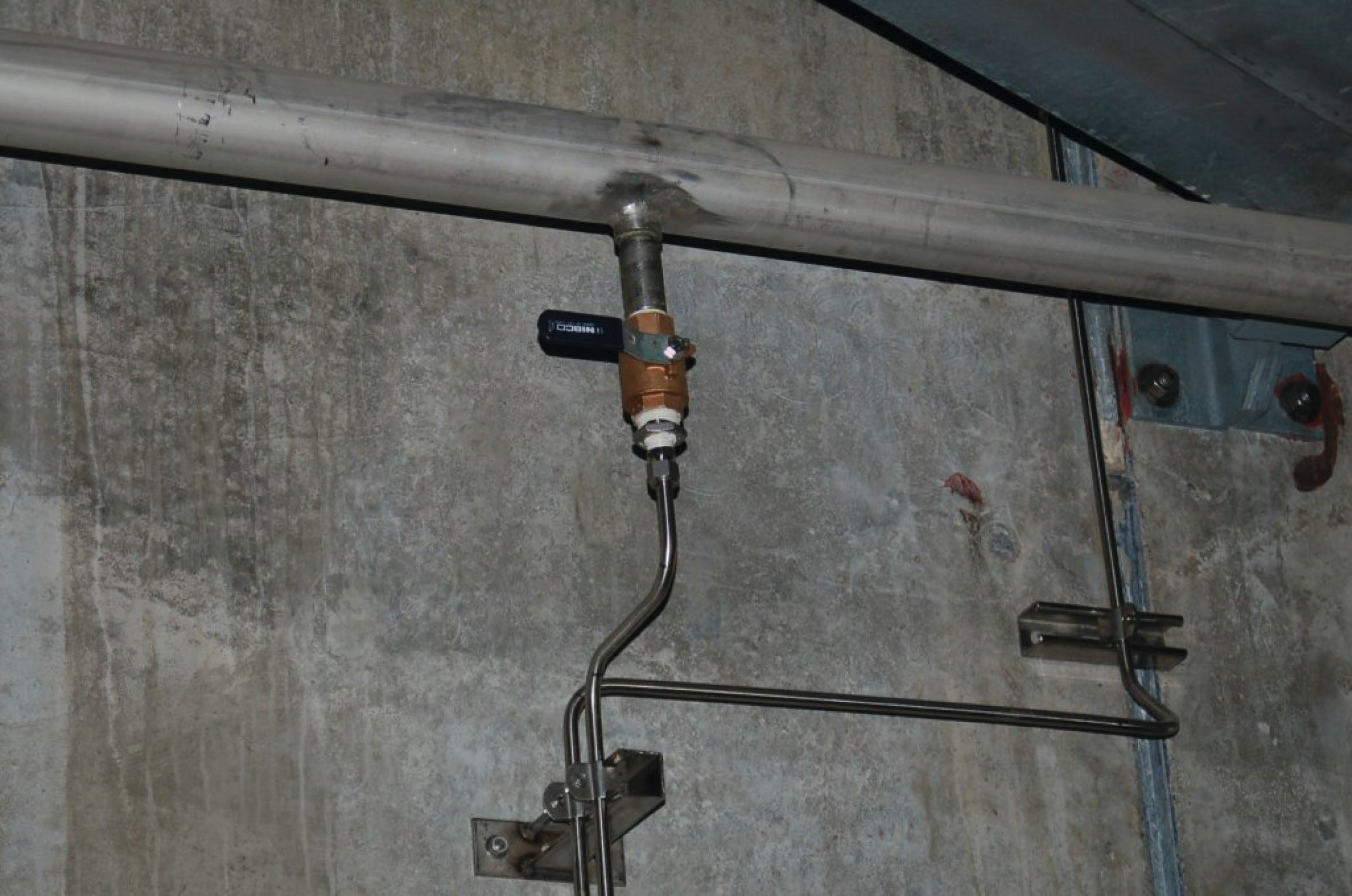 Such an installation invites trouble, as every bit of water condensed inside the header pipe is guaranteed to find its way by gravity to the instruments connected to the underside of that header.

One good feature of this installation is the use of stainless steel as the piping material. Copper, brass, plastic, and stainless steel are the preferred materials for instrument air piping, tubing, valves, and fittings, as the standard (iron) pipe will inevitably rust in the presence of condensation. Particles of rust created inside an instrument air system play havoc with the tiny ports, nozzles, and orifices of pneumatic instruments.

The proper way to make instrument air connections to the air header is as such: 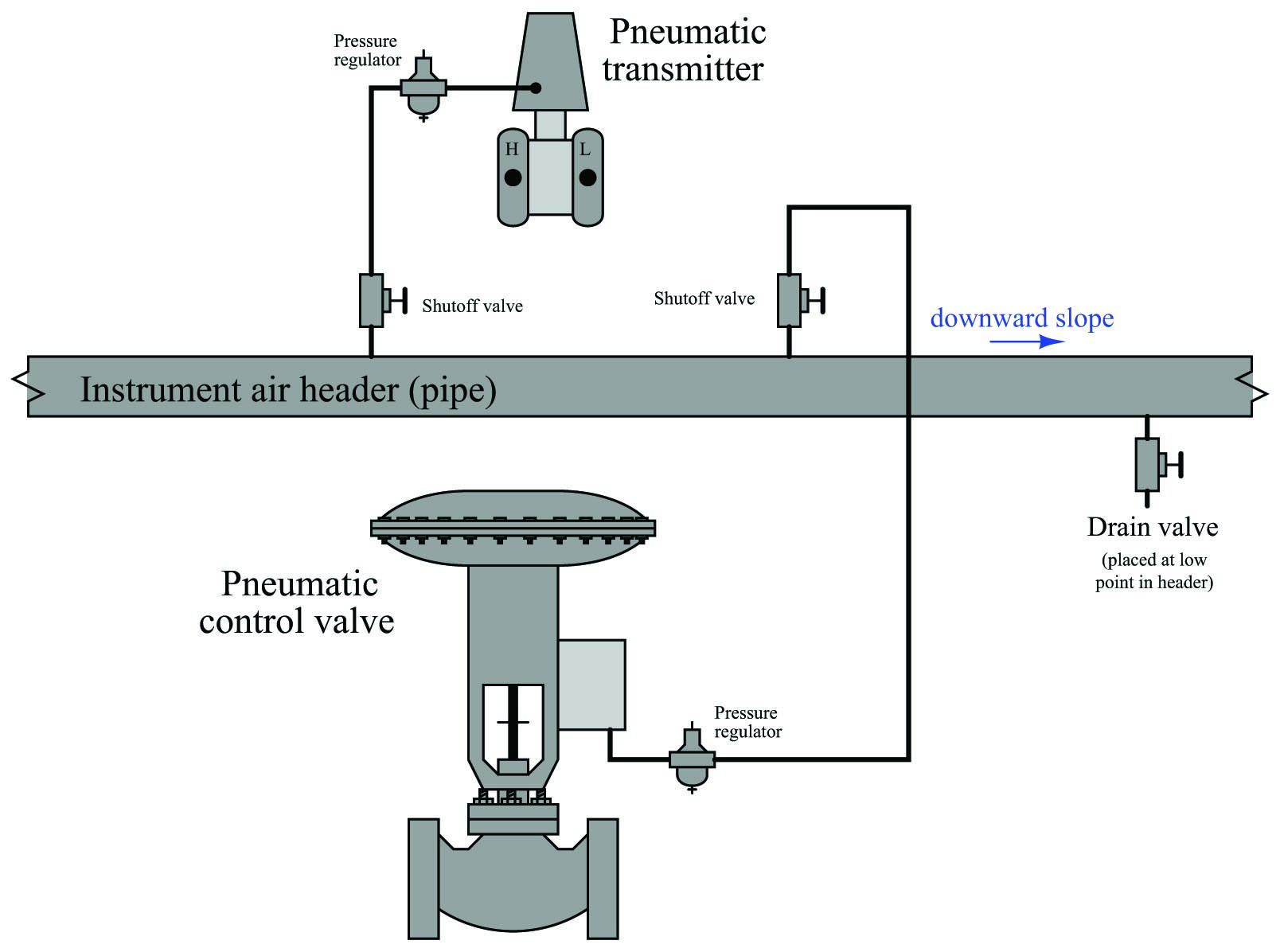 In order to facilitate the draining of the header, the header should be slightly inclined, with the drain valve installed at the lowest point. This drain valve should then be periodically opened on a regular maintenance schedule in order to prevent the header from slowly filling up with condensed water over time.