Steam boilers are very common in industry, principally because steam power is so useful. Common uses for steam in industry include doing mechanical work (e.g. a steam engine moving some sort of machine), heating, producing vacuums (through the use of “steam ejectors”), and augmenting chemical processes (e.g. reforming of natural gas into hydrogen and carbon dioxide).

The process of converting water into steam is quite simple: heat up the water until it boils. Anyone who has ever boiled a pot of water for cooking knows how this process works. Making steam continuously, however, is a little more complicated. An important variable to measure and control in a continuous boiler is the level of water in the “steam drum” (the upper vessel in a water-tube boiler). In order to safely and efficiently produce a continuous flow of steam, we must ensure the steam drum never runs too low on water, or too high. If there is not enough water in the drum, the water tubes may run dry and burn through from the heat of the fire. If there is too much water in the drum, liquid water may be carried along with the flow of steam, causing problems downstream.

In this next illustration, you can see the essential elements of a water level control system, showing transmitter, controller, and control valve: 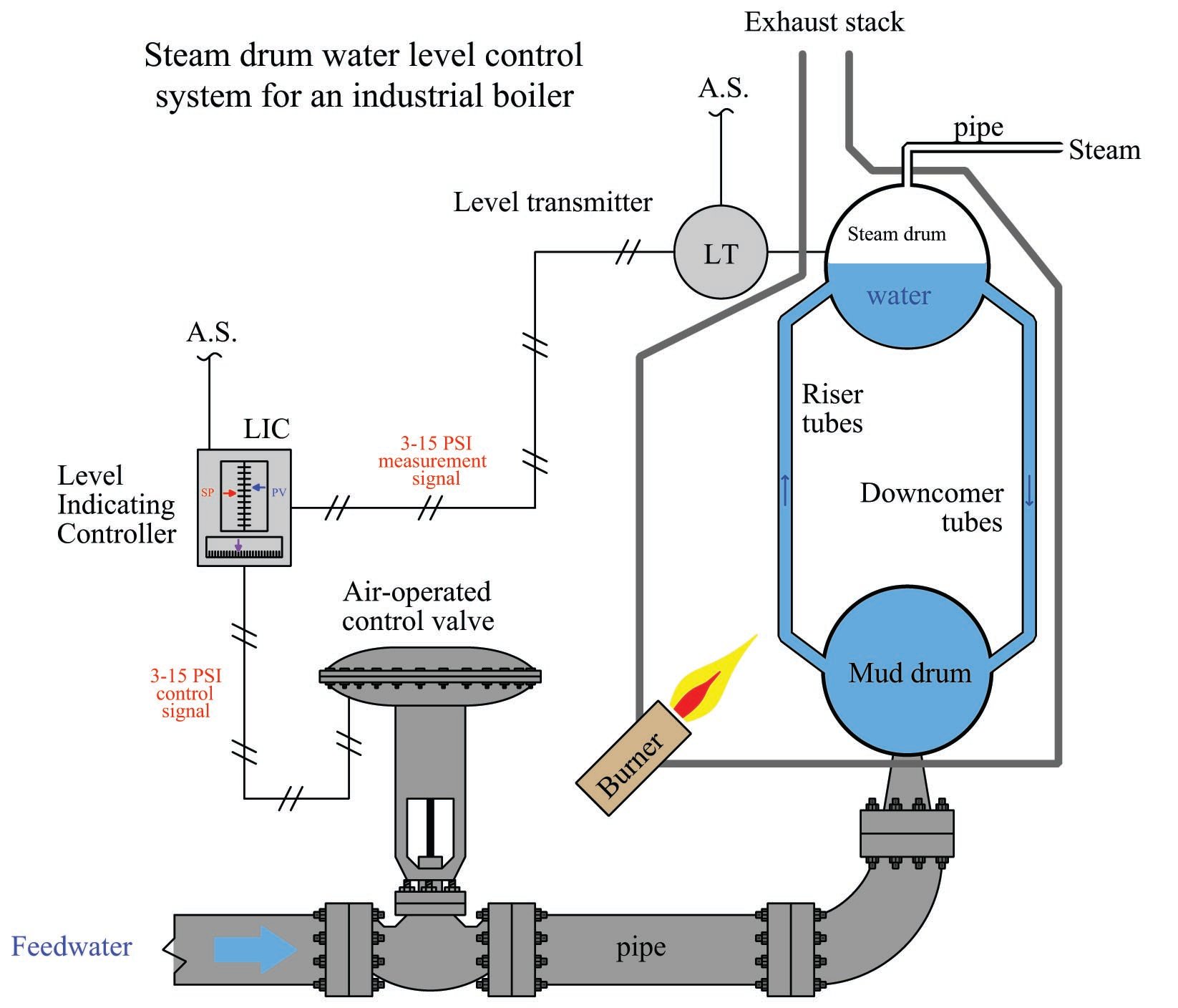 The first instrument in this control system is the level transmitter, or “LT”. The purpose of this device is to sense the water level in the steam drum and report (“transmit”) that measurement to the controller in the form of a signal. In this case, the type of signal is pneumatic: a variable air pressure sent through metal or plastic tubes. The greater the water level in the drum, the more air pressure output by the level transmitter. Since the transmitter is pneumatic, it must be supplied with a source of clean, compressed air on which to operate. This is the meaning of the “A.S.” tube (Air Supply) entering the top of the transmitter.

This pneumatic signal is sent to the next instrument in the control system, the level indicating controller, or “LIC”. The purpose of this instrument is to compare the level transmitter’s signal against a setpoint value entered by a human operator representing the desired water level in the steam drum. The controller then generates an output signal telling the control valve to either introduce more or less water into the boiler to maintain the steam drum water level at setpoint. As with the transmitter, the controller in this system is pneumatic, operating entirely on compressed air. This means the output of the controller is also a variable air pressure signal, just like the signal output by the level transmitter. Naturally, the controller requires a constant supply of clean, compressed air on which to run, which explains the “A.S.” (Air Supply) tube connecting to it.

The last instrument in this control system is the control valve, operated directly by the air pressure signal output by the controller. Its purpose is to influence the flow rate of water into the boiler, “throttling” the water flow more or less as determined by controller. This particular type of control valve uses a large diaphragm and a large spring to move the valve further open with more signal pressure and further closed with less signal pressure.

What this means in a practical sense is that the controller’s output signal (equating to valve position) in automatic mode is just as much a function of process load (i.e. how much steam is being used from the boiler) as it is a function of setpoint (i.e. where we wish the water level to be). Consider a situation where the steam demand from the boiler is very low. If there isn’t much steam being drawn off the boiler, this means there will be little water boiled into steam and therefore little need for additional feedwater to be pumped into the boiler. Therefore, in this situation, one would expect the control valve to hover near the fully-closed position, allowing just enough water into the boiler to keep the steam drum water level at setpoint. If, however, there is a high demand for steam from this boiler, the rate of evaporation will be much greater. This means the control system must add feedwater to the boiler at a much greater flow rate in order to maintain the steam drum water level at setpoint. In this situation we would expect to see the control valve much closer to being fully-open as the control system “works harder” to maintain a constant water level in the steam drum. Thus, we see how the controller automatically positions the control valve to react to different boiler operating conditions even when the setpoint is fixed.

A human operator supervising this boiler has the option of placing the controller into “manual” mode. In this mode the control valve position is under direct control of the human operator, with the controller essentially ignoring the signal sent from the water level transmitter. Being an indicating controller, the controller faceplate will still show how much water is in the steam drum, but it is now the human operator’s sole responsibility to move the control valve to the appropriate position to hold water level at setpoint – in manual mode the controller takes no corrective action of its own. Manual mode is useful to human operators during start-up and shut-down conditions. It is also useful to instrument technicians for troubleshooting misbehaving control systems. Placing a controller into manual mode is akin to disengaging the cruise control in an automobile, transferring control of engine power from the car’s computer back to the human driver. One can easily imagine an automobile mechanic needing to throttle a car’s engine “manually” (i.e. with the cruise control turned off) in order to properly diagnose an engine or drivetrain problem. This is true for industrial processes as well, where instrument technicians may need to place a controller into manual mode in order to properly diagnose transmitter or control valve problems.

As was mentioned before, this is an example of a pneumatic (compressed air) control system, where all the instruments operate on compressed air, and use compressed air as the signaling medium. Pneumatic instrumentation is an old technology, dating back to the early twentieth century. While most modern instruments are electronic in nature, pneumatic instruments still find application within industry. The most common industry standard for pneumatic pressure signals is 3 to 15 PSI, with 3 PSI representing low end-of-scale and 15 PSI representing high end-of-scale. Alternative pressure ranges for pneumatic signals sometimes encountered in industry include 3 to 27 PSI, and 6 to 30 PSI. The following table shows the relationship between air signal pressure and steam drum level for this boiler’s 3-15 PSI level transmitter:

It should be noted this table assumes the transmitter measures the full range of water level possible in the drum. Usually, this is not the case. Instead, the transmitter will be calibrated so it only senses a narrow range of water level near the middle of the drum. Thus, 3 PSI (0%) will not represent an empty drum, and neither will 15 PSI (100%) represent a completely full drum. Calibrating the transmitter like this helps avoid the possibility of actually running the drum completely empty or completely full in the case of an operator incorrectly setting the setpoint value near either extreme end of the measurement scale.

Even though the same range of air pressure (3 to 15 PSI) is used to represent water level in the steam drum and the position of the control valve, there is no simple correspondence between the two signals. A common misconception for students new to this topic is to assume the transmitter signal (PV) and controller output signal must be identical. This is not true. Typically the 3-15 PSI signal representing level will be at some value different from the 3-15 PSI signal driving the valve, because those two signals represent two entirely different variables in the boiler system. As we have seen previously, the output signal from a controller in automatic mode is just as much a function of process conditions as it is a function of the measured variable. This error is akin to thinking the road speed signal in an automobile cruise control system (the “process variable” or PV) must be the same value as the signal sent by the cruise control computer to the engine’s accelerator control (the controller’s “output” signal). Granted, these two signals are related to one another, but since they represent two different parameters in the controlled system we have no reason to expect their values will be equal except by chance.