Use of Line Reactors

Use of Line Reactors

Regulating the electric power sent to an electric motor is a task performed by high-speed switching transistors inside a motor drive, modulating the pulse-width of a high-frequency square wave to the motor. The high-speed switching happening inside of a motor “drive” circuit results in the drive drawing current from the AC power source as high-frequency pulses rather than as sinusoidal waves. These current pulses tend to distort the voltage of the AC power source so that other devices powered by the same AC source will “see” high-frequency noise on the power lines. This is true for DC and AC motor drives alike: 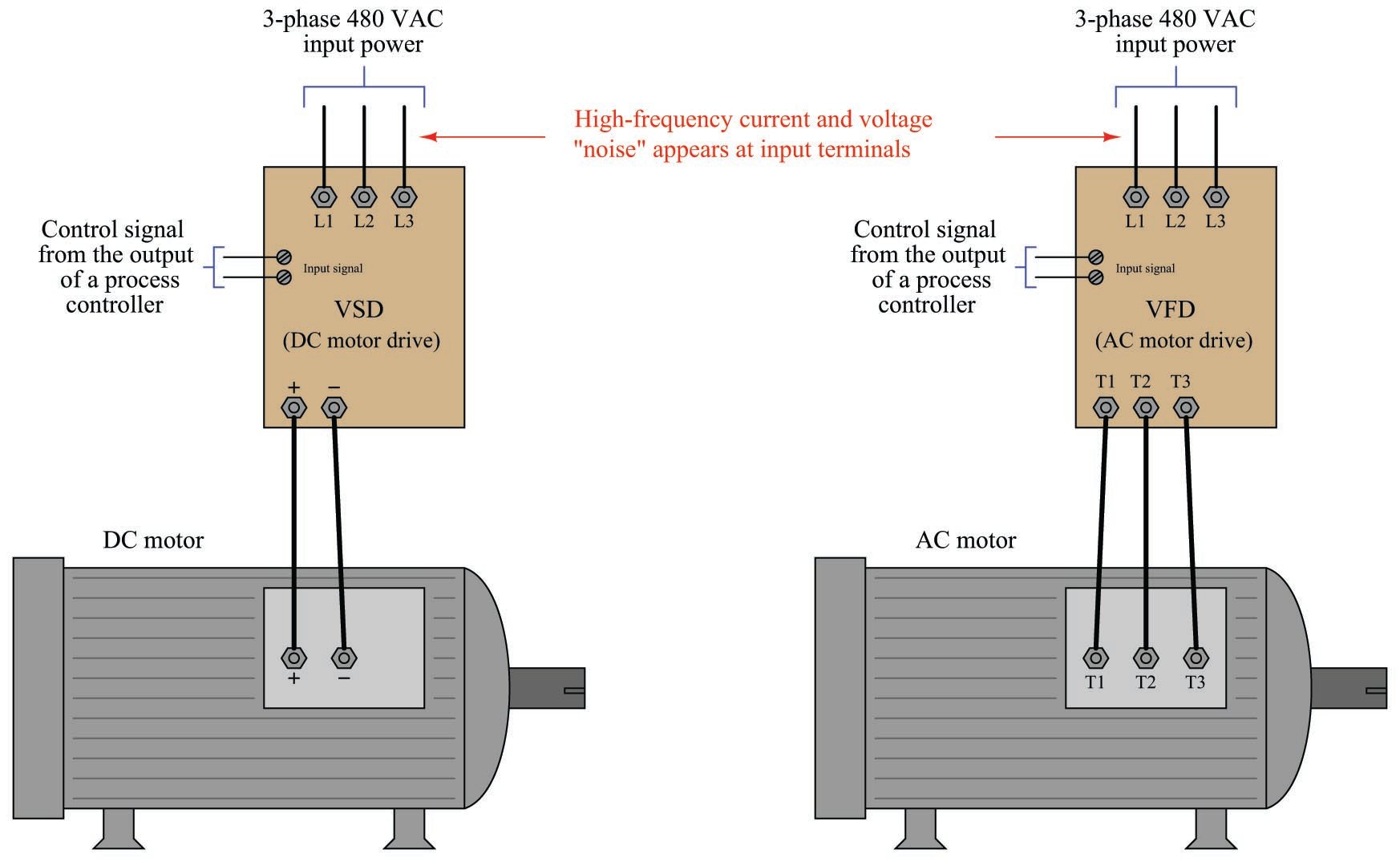 As French mathematician and physicist Jean Baptiste Joseph Fourier (1768-1830) mathematically proved centuries ago, any repeating waveform – no matter how strange the shape may be – is equivalent to a series of sine and cosine waves at integer multiples (“harmonics”) of some fundamental frequency. Thus, the normal sine-wave AC power supplied to an operating motor drive unit will be tainted by harmonic frequencies in addition to the fundamental frequency of 60 Hz.

Such high-frequency noise may be very troublesome to nearby electronic devices and to other electrical components connected to the same AC power system. Power transformers will suffer increased core heating from harmonic currents. System capacitances and inductances may resonate at these harmonic frequencies causing high currents and voltages to form. So-called triplen harmonics are especially troublesome in three-phase power circuits, where they tend to add in the neutral conductors of Wye-connected system components and circulate through the phase elements in Delta-connected system components. In some industrial installations, the magnitude of triplen harmonic currents in a 4-wire Wye system have been so great that the neutral conductor actually overheated from excessive current, even though the three line conductors were well within their rated load current capacities!

One method useful to combat these effects is to filter harmonic frequencies from the rest of the AC power system, preventing the subsequent “corruption” of the AC power source by the motor drive’s pulsing currents. The most direct way to filter harmonic frequencies is to use an electrical component acting as a low-pass filter – a simple inductor connected in series with the motor drive. For three-phase-powered motor drives, this takes the form of three inductor elements, commonly referred to in industry as reactors: 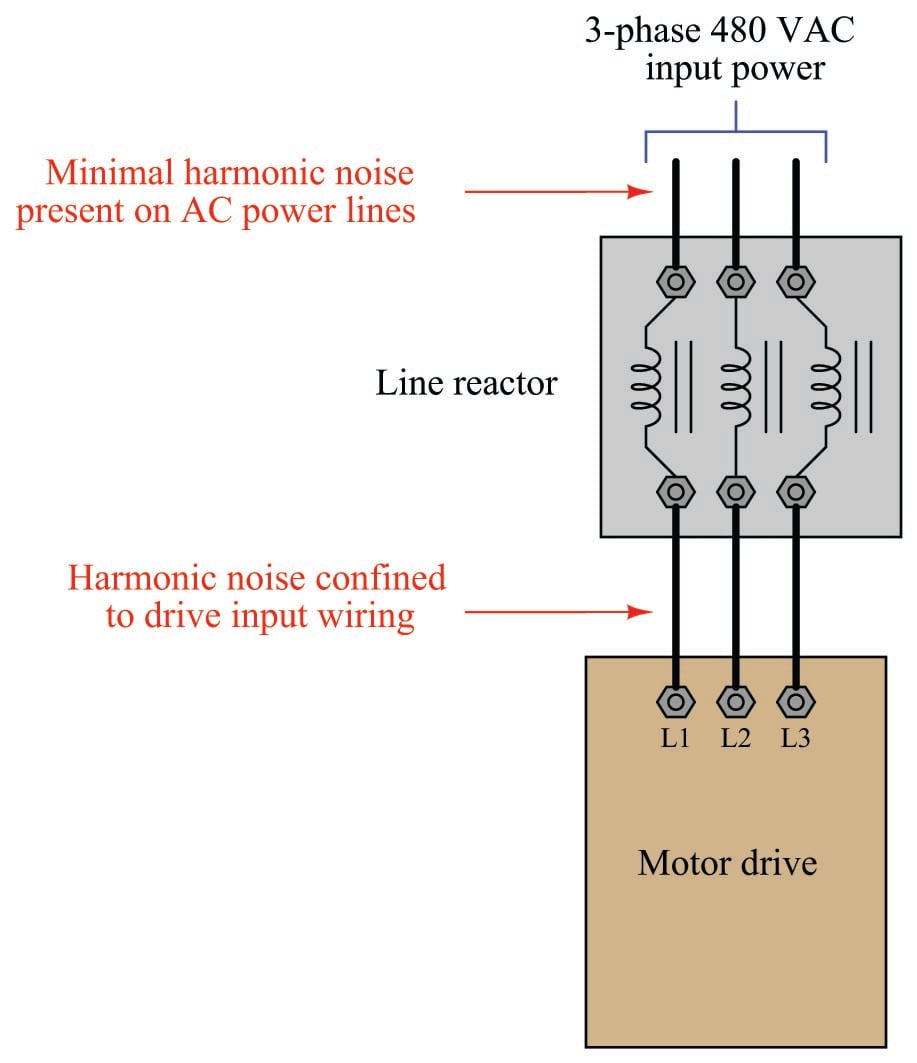 Line reactors work by presenting a greater series impedance to high-frequency harmonic currents than to low-frequency fundamental currents, following the inductive reactance formula \(X_L = 2 \pi fL\). The greater the frequency (\(f\)) of current, the greater the inductive reactance (\(X_L\)) and therefore the greater the attenuation of that current through that conductor. As one might expect, line reactors cannot prevent harmonic distortion in the AC power system, but they do a great deal to mitigate the ill effects of harmonics produced by a motor drive.

Line reactors may also be used on the output of an AC motor drive to filter harmonics from the motor itself. Like transformers, AC induction motors suffer greater core losses when exposed to harmonic currents, causing the motor to heat up more than it would if powered by AC power of one pure frequency: 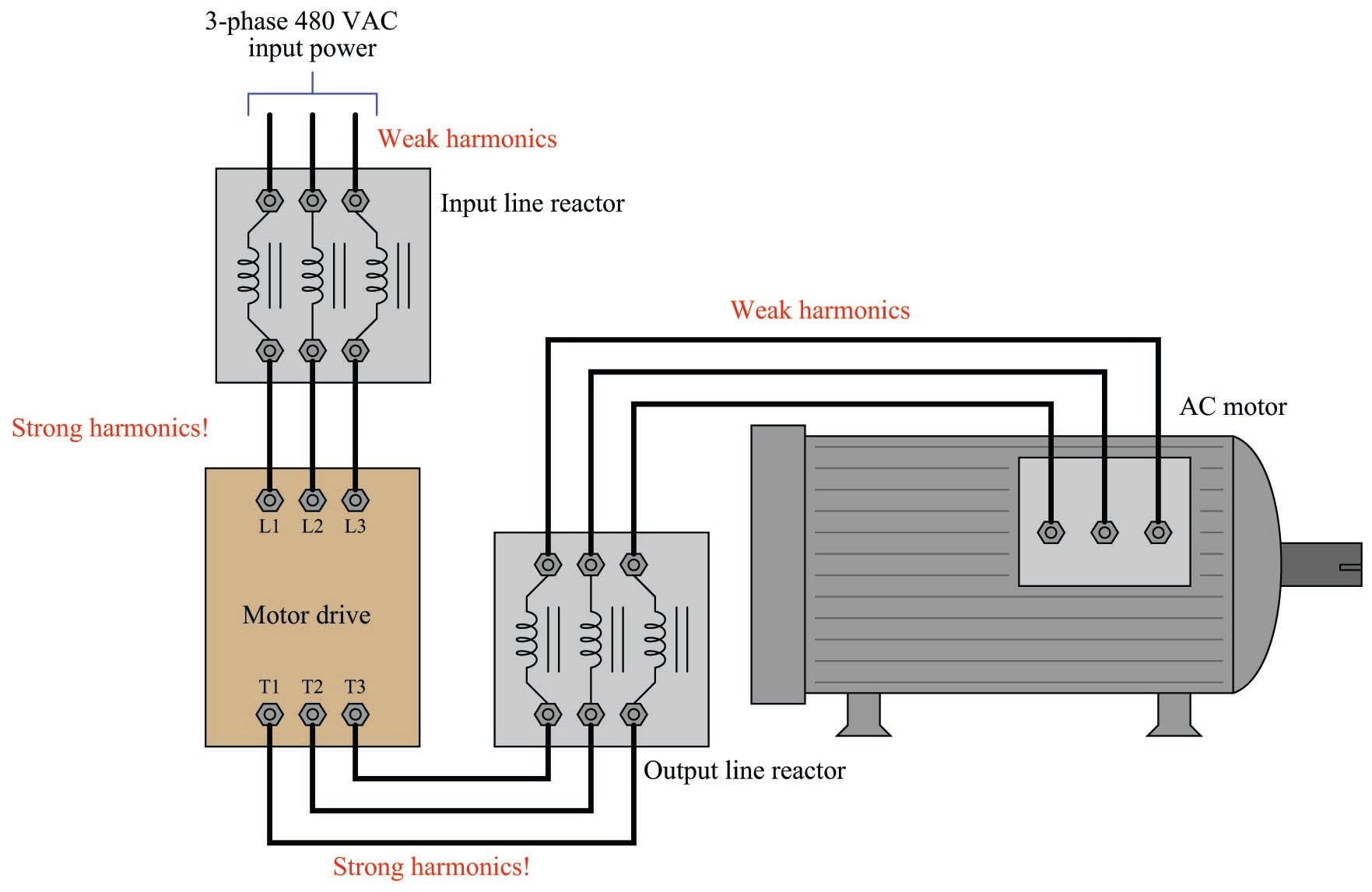 The presence of strong harmonic distortion on the motor drive’s input wiring means those conductors should be kept short as possible to minimize electromagnetic interference with nearby electrical and electronic components.

Not only do output line reactors help reduce heating effects in the AC motors powered by variable-frequency drives, the reactors also reduce the severity of fault currents resulting from short-circuit transistor failures in the motor drive, as well as minimize the ill effects of reflected signals in the conductors stretching between the output line reactor and the motor itself. With such benefits arguing for the installation of line reactors in variable-speed motor control circuits, the only reason for their non-installation is added expense, and/or insufficient space inside the enclosure with the motor drive.