CES 2020 Touches on Cobots, Smart Factories, and the Idea that the Fourth Industrial Revolution Won’t Revolve Around Factories

CES 2020 Touches on Cobots, Smart Factories, and the Idea that the Fourth Industrial Revolution Won’t Revolve Around Factories

The Consumer Electronics Show is geared towards product designers and tech enthusiasts—but it may be worth a quick look for automation experts, too.

The Consumer Electronics Show—or CES, as it's more commonly known—begins today in Las Vegas. As the name suggests, the show is geared towards consumers, but there are some events, companies, and presentations that still touch on the industrial world.

Here's a breakdown of what automation engineers may care about at CES 2020 and a glimpse at what this event tells us about how the consumer-oriented public thinks of automation. (Spoilers: Not much.)

One of the main events of the show, so to speak, is a "supersession" in which Siemens USA CEO Barbara Humpton will address the topic "What's Next for the Fourth Industrial Revolution?" According to the event preview, Humpton will make the argument that, while industrial revolutions have traditionally (and logically) begun in the factory setting, the looming fourth industrial revolution is actually beginning in the realm of the consumer.

Topics that will be touched on reportedly include smart infrastructure and digital industry, painting a picture of how data and software are changing the world.

One of this year's CES Innovation Awards honorees is Smart Robots, which has gained recognition for their cobot-focused product of the same name.

The Smart Robot device is largely a bundle of sensors that can be placed on a cobot's wall or floor with a stand. Each device can be paired with a cobot and control—and, importantly, adapt—its movements. 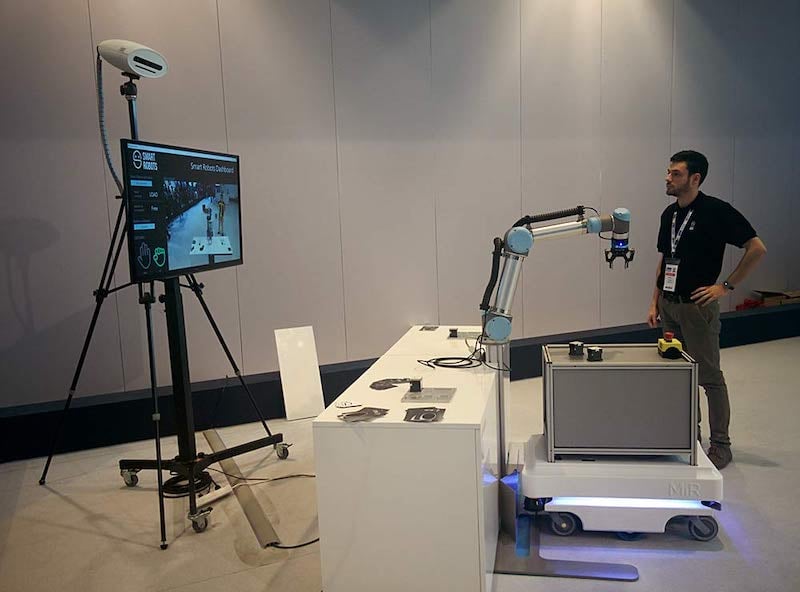 The Smart Robot perched atop a stand on the left monitors a cobot at work. Image used courtesy of Smart Robots.

Because the Smart Robot device is capable of machine learning and gesture recognition, it can learn from watching a coworker the same way a human trainee might.

One of the upcoming conference sessions is entitled "Bringing Disruptive Technologies into the Smart Factory," presented by five industry experts from Deloitte Consulting, AWS Worldwide, Siemens, and Wichita State University.

Information on presentations such as these are sparse ahead of their scheduled time, but the event's description mentions some familiar pain points (efficiency and safety) and some "disruptive" solutions for addressing them. You can expect this presentation to touch on the quickly changing nature of modern factories and what makes them "smart," including a look at example technologies that are "disrupting" the industry. Stated examples include:

Relevant to the first point above is another presentation in the "Design and Source" conference track which addresses "Energy Efficiency and Compliance for Modern A/V Design." In this talk, policy and standards experts from places like the EPA and Natural Resources Defense Council will discuss specifications for energy usage policy that affect manufacturers and product design.

CES is a wonderland of technology, especially for those trying to keep up with trendy consumer products like entertainment electronics. It makes sense that industrial topics would not be at home in this setting—but the marked lack of discussion around manufacturing and especially around automation speaks volumes about the gulf between the world of the consumer and the world of how those tech products are made.

Have you ever attended CES? What's your interest in tech conferences like this one?