The goal of the ACE program is to increase trust in combat autonomy by using human-machine collaborative dogfighting as its challenge problem. The program can help develop trusted, scalable, human-level, AI-driven autonomy for air combat. The program aims to employ “cutting-edge” AI technologies to the dogfight problem in experiments where various possible scenarios are made to be as realistic as possible.

It also aims to measure, calibrate, increase, and predict human trust in combat autonomy performance. Any progress made in the simulated dogfight experiments will be up-scaled to other complex multi-aircraft, operational-level simulated scenarios informed by live data.

The ACE program hopes to instill trust in pilots concerning the proper functionality of the autonomous systems they control. It is hoped that the program will enable pilots to perform higher-level cognitive functions (such as developing an overall engagement strategy, selecting and prioritizing targets, etc.). Simultaneously, the autonomous system takes care of lower-level functions (such as details of aircraft maneuver and engagement tactics).

Pilots must be able to trust the autonomy to conduct complex combat behaviors—at first, for dogfights within visual range, and next, with dogfights that are out of sight.

Phase 1 of the ACE Program

In August 2020, the ACE program’s AlphaDogfight trials were run by the Johns Hopkins Applied Physics Laboratory (APL). These trials involved a competition between eight teams. The AIs of each team flew simulated F-16s in 1-v-1 aerial dogfights developed by APL. The winning AI was then selected and flew five simulated dogfights against an experienced F-16 fighter pilot in a simulator. The AI beat the human 5-0.

In a news release, the Program Manager in DARPA’s Strategic Technology Office, Col. Dan “Animal” Javorsek, commented on the AI algorithm’s simulation-to-real transition. Javorsek noted it is essential to have a real-world simulation test. 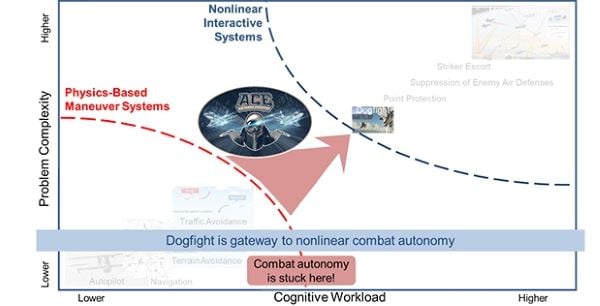 Following the AlphaDogfight trials, the first AI scrimmage was completed at APL in February of this year. Scrimmage 1 involved 2-v-1 simulated engagements with two friendly “blue” F-16s fighting together against enemy “red” aircraft. This next stage of simulated AI dogfights introduced more weaponry and allowed the assessment of “how the AI agents handle clear avenue of fire restrictions set up to prevent fratricide,” Javorsek explained.

According to Javorsek, when operating offensive weapons in a dynamic and confusing environment, it is vital to include a manned fighter with the opportunity to increase the complexity and teaming associated with maneuvering two aircraft in relation to an adversary.

At the University of Iowa Technology Institute’s Operator Performance Laboratory (OPL), test pilots have flown the two-seater L-29 jet trainer to test the pilots’ trust in the AI. The jet uses in-built sensors located in the cockpit to measure pilot physiological responses.

From the data collected, researchers can observe whether the pilot is trusting the AI or not. While the AI does not fly the jet directly, it generates flight control inputs executed by a safety pilot in the cockpit.

DARPA is looking at miles per disengagement used in self-driving vehicles to help the program’s metrics and measure where the pilot’s head points and where their eyes dart around the cockpit. DARPA hopes this will enable them to see how much the pilot checks on the autonomy by how often the pilot looks out the window rather than spending time on their battle management task at hand.

The ACE program continues its progress and expects to see an L-39 full-scale jet trainer that can be flown by AI in live-fly team dogfights during Phase 3 of the program in late 2023 and 2024.