Balluff, an automation supplier that specializes in sensors and connectivity, recently announced a new machine vision solution for use in quality control testing, the BVS SL SmartCamera Lite.

The BVS SL SmartCamera Lite is a simplified version of Balluff’s existing SmartCamera. 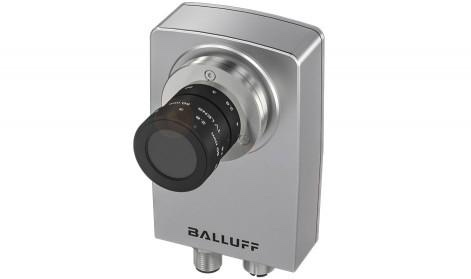 The SmartCamera Lite does not include advanced tools such as image analysis functions that do more than simple tracking and monitoring applications related to quality control. It also implements Fieldbus networking as opposed to an IO-Link interface and has a more compact form factor.

Among the key features of SmartCamera Lite is its secure, application-specific results management for effective machine vision. It also offers excellent flexibility that allows test plans to be created and implemented quickly and easily.

In addition to flexibility, the Smart Camera Lite is extremely versatile in the interfaces that it supports, which allows it to be easily integrated with existing systems.

There are five models currently available:

All models have CMOS cameras that provide a 1280 × 1024 resolution. The SmartCamera Lite models have dimensions of 65 x 40 x 99.5 mm and are housed in IP67 rated painted aluminum housing. The system interface for these systems is Gigabit Ethernet, and the process interfaces are TCP, UDP, and RS232. These cameras also have a digital interface of 6 I/O ports.

The Balluff BVS SL SmartCamera Lite uses machine vision to support quality control by detecting defects early on in the manufacturing process. The SmartCamera Lite can handle basic tasks such as object detection and recognizing the absence of a shape or color.

The data it provides can support more advanced quality control, such as recognizing the presence of cracks, accomplished by comparing the image obtained by the camera to an image of what the product should look like.

The BVS SL SmartCamera Lite can capture high-resolution images of products as they move through the manufacturing process. Image used courtesy of Balluff

The BVS SL SmartCamera Lite provides further support to quality control through its ability to detect machine codes and serial numbers, so defective products can be traced back to the source of the defect in the production process.

One aspect of the BVS SL SmartCamera product line that makes them easy to implement is the collection of testing routines included with the built-in BVS Cockpit software. These routines can be configured using a web browser, and inspection programs can be generated the same way.

In addition, the data obtained from the implementation of the testing routines used can also be configured to control how much and what data is recorded as well as how the data should be formatted.

The BVS SL SmartCamera Lite can be used in various manufacturing industries, including automotive, packaging, plastics, metalworking, pharmaceutical, and semiconductors. In addition, it is designed to be durable enough to perform in harsh environmental conditions due to its IP-67 protection rating.