B&R Automation released their latest innovation in HMI systems, the Power Panel C80. The new device is an industrial HMI combined with a power controller providing users with multiple I/O connectors, and a low-profile.

The C80 is a plug-and-play system, designed to simplify installation and reduce equipment setup time and deployment. The C80 integrates a computational system powered by an Intel Atom processor with multiple I/O including Ethernet, USB, POWERLINK, and an X2X Link interface. 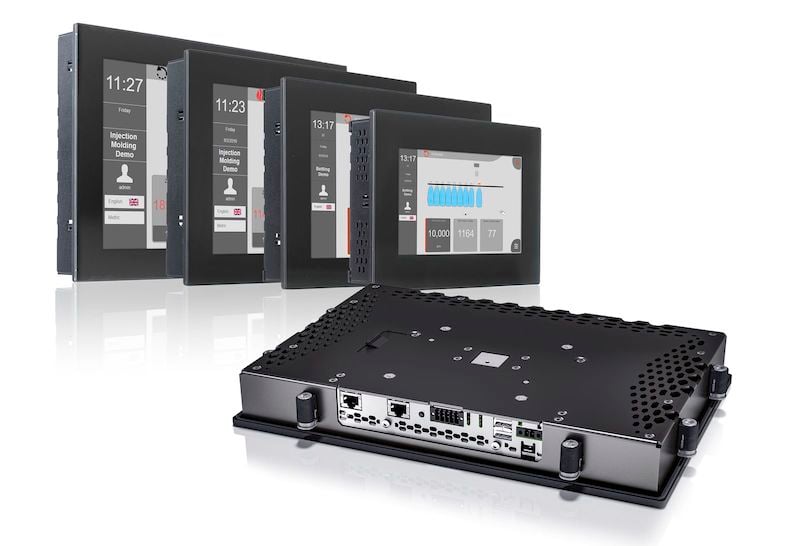 I/O can further be expanded to include RS-232 and RS-485 with add-ons and the fan-less design of the C80. The panel comes pre-installed with a Linux OS, and user applications need to be transferred to the device for customisation.

The pre-installed operating system takes advantage of two onboard processing cores and runs two operating systems simultaneously. This allows the controller side of the interface to operate independently to the HMI side, removing the possibility of an HMI freeze to interfere with the panels interface.

The simplified nature of the panel can speed up installation. The C80 also provides an interface via a capacitive touch screen. Many workers in industrial environments often wear PPE, which can include thick leather gloves, but the C80 touchscreen can still operate in such conditions.

The C80 touchscreen supports various gestures, including scrolling and zooming with multiple fingers.

The C80 is designed for use with mapp View, an HMI application developed using the mapp View software platform by B&R Automation. Browser-based applications are now taking advantage of Javascript, HTML5, CSS, and mapp View allow engineers to design such apps.

However, mapp View removes the need for automation engineers to interface with any Javascript, HTML5, and CSS, and a drag-and-drop interface aids the creation of GUIs with interactive elements.

As B&R Automation already produce a wide range of other industrial systems and equipment, B&R Automation has ensured that the Power Panel C80 is compatible with all other B&R Automation Panels. The C80 can be connected to various I/O modules, motion control axis, and safety components to create a highly efficient panel.

Industrial environments are often consumed by dust and dirt that fill the local air. Massive amounts of heat generated by processes can create a sweltering atmosphere, and intense mechanical vibration can also be hazardous. Despite these potentially harsh conditions, the equipment has to be manufactured to operate in such environments.

The Power Panel C80 provides harsh environmental protection via its IP65 protection meaning the display is both dust-tight and can survive against powerful jets of water and rough seas. However, a display with such rugged protection also benefits from reading gestures through thick PPE as such equipment is often worn in harsh environments.

This protects the C80 and the operators of the panel as they can continue to wear their PPE while operating the C80.