The company raised $56 million earlier this week, with its latest series A round including investors such as Kleiner Perkins, Lightspeed, and Obvious Ventures. Dexterity’s aim is to develop robots capable of automating repetitive pick-pack tasks and handling complex manipulations in unpredictable environments.

Automating Robotics in the Warehouse

Based in Palo Alto, California, Dexterity was founded in 2017 by CEO Samir Menon and has since then focused on the development of Full-Stack, End-To-End Automation solutions.

The startup uses AI to give robots human-like dexterity. Dexterity develops both software and hardware of their machines, with the ultimate goal of maximizing human productivity.

According to the company, this will translate into the creation of a hybrid human-robot team operating in synchrony to do multiple related tasks in multiple unstructured workflows across different locations. The team will also utilize software tools to manage cross-task scheduling among the teams and optimize global productivity.

According to the company, the machines can currently pick up more than 200 unique items in production with 99.5% accuracy. The list includes various objects typically found in warehouses, including plastic bags, glass, perishables, and low-profile items. 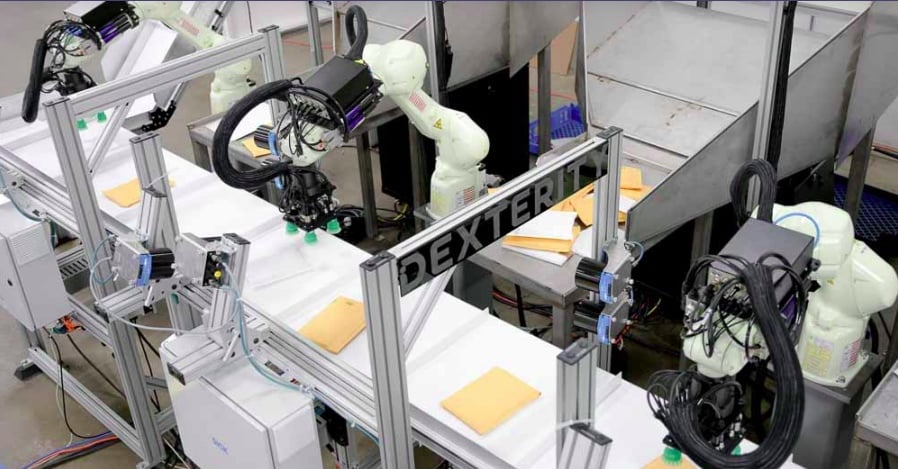 Dexterity’s robots are capable of performing these actions thanks to technologies such as AI, computer vision, advanced control theory, and the sense of touch. This not only makes them safe to work alongside humans, but also allows warehouse employees to focus on higher-level cognitive work.

Since Dexterity’s aim is to build robots that are able to adapt to new environments, its platform is highly modular. This means the company's partners work with customers to create machines capable of performing different autonomous tasks. These range from fulfillment to kitting, from sortation to singulation, and from palletization to depalletization.

From a practical standpoint then, Dexterity’s robots are firstly equipped with a variety of hardware components, such as grippers or suction cups to handle objects. The AI software then utilizes 3D camera systems to track items, and machine learning models to identify arbitrary unknown objects.

According to Dexterity, early tests utilizing the company’s machines have increased operators' productivity by 47%., with the figure increasing as the robots autonomously learn from their environment.

Kawasaki is one of the Dexterity’s first clients, a Japanese multinational corporation with more than a century experience in the manufacturing industry. “Dexterity’s artificial intelligence, computer vision, and stacking design technology was what really stood out to us,” said Toshihiko M., Manager of the Robotics Business Center at Kawasaki Heavy Industries.

“Samir provides a clear vision for the future of our robotic applications and gives us confidence that with this partnership, we can easily deploy our robots in a variety of ways,” Toshihiko concluded.

What do you think about Dexterity’s new robots?