The Fraunhofer-Gesellschaft research organization announces the development of a sensor system that can help robots detect transparent objects in three dimensions.

A good number of robotic sensing application depend on infrared (IR) sensors, which are hindered by their inability to detect transparent objects. Other surfaces like glass, very glossy metal, or those that are jet-black (light absorbing) are among such objects that robots cannot “see” very well. Typical IR and visible light sensors rely on the reflection of certain wavelengths of light, so transparency and absorption are difficult scenarios.

Manufacturing facilities and warehouses that produce and transport materials, products, or parts with transparent elements, using robots with the inability to see them and interact with them can be said to cause quite a problem in terms of efficiency. In March 2022 the Fraunhofer-Gesellschaft research organization announced that researchers from the Fraunhofer Institute for Applied Optics and Precision Engineering IOF had developed a unique sensor for detecting transparent objects in three dimensions (3D). The MWIR 3D Sensor – also called Glass360Dgree, has now been successfully tested with a robot for the first time. 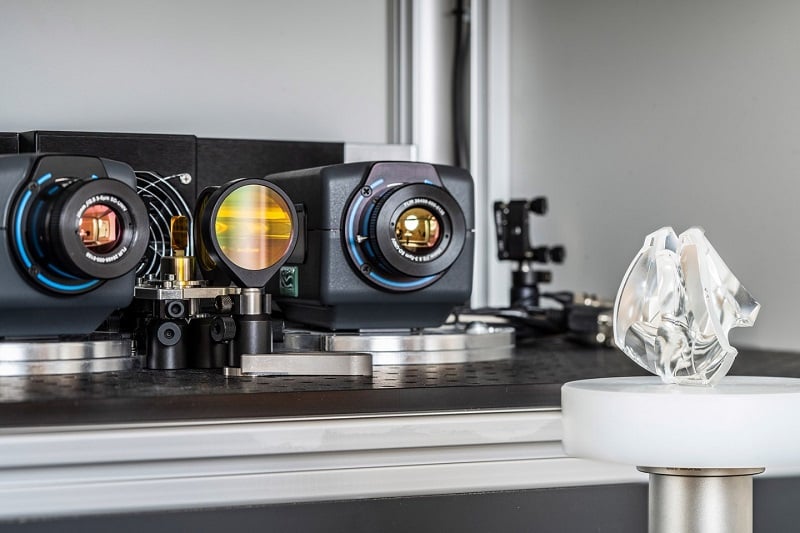 How Does the MWIR Sensor Work?

The MWIR 3D Sensor combines the use of thermography and IR laser projection to detect transparent objects.

The sensor works by heating the object to be measured while two thermal imaging cameras determine the resulting temperature distribution on its surface. A high-energy CO2 laser works in tandem with a mobile optical setup with special lenses, which project a moving IR line over the measured object. The object absorbs the energy of the laser light and reactively emits this energy to the two thermal imaging cameras. Two cameras work with stereoscopic ability, much like human eyes, to measure distances to objects with a very precise accuracy.

A heat signature is left by the IR line on the object for a short time. Specialized software developed at Fraunhofer IOF is then used to reconstruct the spatial coordinates of the object. Following this step, the software merges the data into the exact dimensions of the measured object. During sensor use and 3D analysis, a temperature increase of typically less than 3°C is generated, ensuring that the object being measured is not damaged in any way. 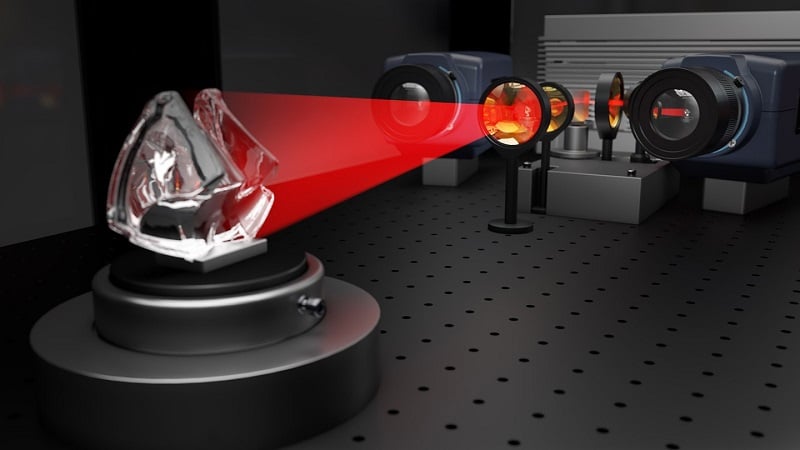 Although the technology is in infancy at this time, it seems likely to explore applications in both manufacturing as well as 3D scanning, already easily possible with traditional optical scanning methods for opaque objects.

The researchers that developed the MWIR 3D Sensor have been communicating with companies within the semiconductor manufacturing, automotive, and aviation industries.

In a news release from last month, the head of the 3D sensors research group at Fraunhofer IOF, Dr. Stefan Heist, commented, “We were able to identify key starting points to make our system ready for potential use in a large-scale industrial manufacturing facility.”

To prepare the MWIR 3D Sensor for use in industry, the technology has been modified to increase measurement speed and the parameters of the measurement field have been enhanced. Researchers at Fraunhofer IOF, led by Dr. Stefan Heist and Martin Landmann, collaborated with researchers from the Ilmenau University of Technology to optimize the data processing of their measurement system. The Ilmenau team was able to derive the active control of a robot and its respective tools from the obtained measurement data that was collected.

The Fraunhofer IOF research team believes that their newly developed sensor will provide new opportunities in the automation of industrial processes and for product design. The MWIR 3D Sensor was featured at the Hannover Messe Preview on March 16. The technology will also be featured at the German trade fairs: Hannover Messe (at the Fraunhofer joint booth in Hall 5, Stand A06) from May 30 – June 2, 2022, and (the international trade fair for quality assurance) Control, from May 30 – June 2, 2022.