On April 22, 2022, Launcher Inc. announced a milestone completion of a successful test fire of the Launcher Light’s 3D-printed E-2 engine at the NASA Stennis Space Center in Mississippi. The E-2 engine was able to demonstrate nominal thrust, pressure, and oxidizer/fuel mixture ratio for the first time.

The California-based company, Launcher Inc., works in partnership with the U.S. Space Force, U.S. Air Force, and NASA to create high-performance rockets and orbital transfer vehicles. The company builds its pioneering technology by integrating the use of cutting-edge liquid propulsion technology and onsite 3D manufacturing. Launcher’s current projects include the development of its satellite positioning vehicle, the Orbiter, and its small launch vehicle, the Launcher Light. 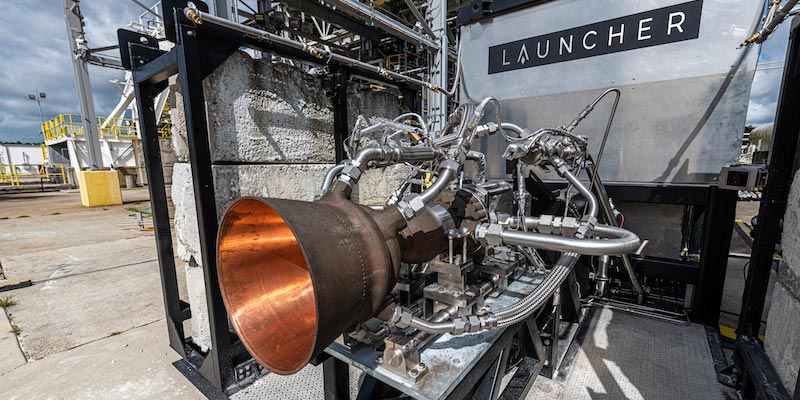 The E-2 Engine and Launcher Light

The E-2 engine is a closed-cycle, staged-combustion engine that powers the first stage with a single engine. During the test, the E-2 engine was able to achieve 22,046 pounds of thrust (which equates to around 10 metric tons) using LOX/Kerosene. The 2.62 LOX/Kerosene mixture ratio is said to confer the highest performance at 100 bars of combustion pressure. Test firing of the E-2 chamber was conducted in 10-second stretches with a total testing time of 40 seconds. Following the repeated firing, the chamber was reported to be in perfect condition. Launcher says that this result demonstrates the chamber’s reusability.

E-2 engine test firing achieves 22,046 pound-feet of thrust. Because a video of a rocket engine is much better than words. Video used courtesy of Launcher

Although Launcher says that the force generated by just one of its E-2 engines will allow the Launcher Light to carry a 150 kg payload at low earth orbit (LEO), the company has yet to test both engine and launch vehicle together to prove the feasibility of such a flight. The small launch vehicle measures 50 ft in height and 3.6 ft in diameter and has a liftoff mass of 8,342 kg.

To provide a couple of comparisons for perspective on thrust, the F-15EX is a next-generation fighter aircraft being developed by Boeing for the US Air Force (USAF). According to Airforce Technology, this jet has a take-off weight of 37,000 kg and is powered by two GE engines, with each generating a thrust of 29,000 lb. At a larger scale, a commercial jet like the four-engined Boeing 747-400 can be configured with engines each producing around 60,000 lb of thrust. Of course, the take-off weight of this jet is far greater than either the Launcher Light or F-15, at 396,900 kg.

Launcher is also pushing forward testing a turbopump with the necessary 3x pressure of the nominal combustion pressure. Once testing of the engine and turbopump is completed, they will be integrated and enter into a proving phase. Pending testing proves a success from all angles, the Launcher Light is planned to undertake its inaugural launch in 2024.