Omron Partners with SMC and CKD for Pneumatic Gripper Development

Omron Partners with SMC and CKD for Pneumatic Gripper Development

These grippers will be used as a plug and play solution for Omron’s TM Series cobot. Both SMC and CKD are pneumatic components manufacturers, so combining their expertise in gripping with Omron’s automation background makes for a robust robotics package.

Several pneumatic grippers will be used with Omron’s robotics (SMC is on the left and in the center, and CKD on the right). Image courtesy of Omron.

Omron is known for its consumer medical device manufacturing, including blood pressure and EKG monitors. These markets require a delicate touch, highly-accurate instrumentation, and rapid electronic communication of data.

Industrial and robotics engineers have come to recognize that Omron has leveraged some of the same techniques found in their medical devices to control automation.

Omron will pair their TM Series arm with custom grippers for moving parts and materials for this partnership. The arm is designed to take multiple types of gripping mechanisms, where one grip can be quickly replaced with another.

Furthermore, the TM series arm can be mounted on a stationary platform or placed on an autonomous robot, such as the Omron LD.

The same autonomous cobot fits with different “hands” to handle various materials, making it versatile in an ever-changing manufacturing environment.

For more information about this effort, check out their website.

SMC is a pneumatic components manufacturer with years of experience developing grippers with various configurations, all of which meet the plug and play standards used by Omron. They also have experience making quick-change grippers and will be a valuable partner in this endeavor.

These grippers will likely gain the most use in materials handling and inspection for quality control operations. The TECHMAN series grippers will be used with the Omron TM Series arms. 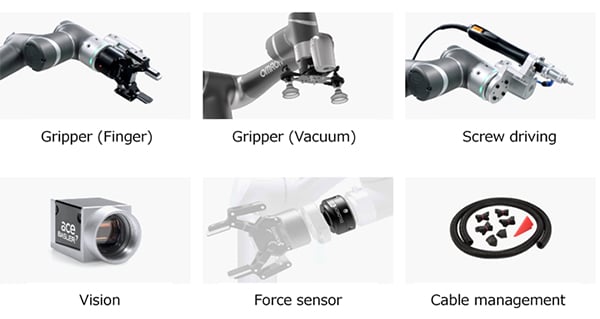 The combination of Omron’s cobots and the SMC and CKD grippers may benefit delicate product movement and inspection, such as moving Front Opening Unified Pods (FOUPs). This is used to transport silicon wafers in the semiconductor industry or tighten the screws in mechanical or electrical devices.

The plug and play system can combine tools to find uses in different industries and changing markets.

Driven by labor shortages due to COVID-19 and a retiring workforce, Omron believes that the plug and play grippers’ versatility will be a promising investment.