Russelectric, a Siemens Business, has developed generators and control systems since 1955. Initially, they were focused on mobile generators until the 1965 Blackout, which left the northeastern part of the United States, including New York and Boston, without power for 13 hours.

The company shifted focus to developing backup power control systems. Russelectric has the longest warranties for such systems on the market and services major clients like Amazon, Boeing, and HBO.

Microgrids are small power systems, typically for large buildings or campuses, that can be turned on during a power service interruption. They are integrated into the regular power grid, but should there be a power outage, they can quickly and safely switch to the microgrid, keeping important electrical systems online.

Once the power outage has been repaired, the microgrid can switch back to commercial power systems.

The system also forecasts energy usage in the future, makes adjustments, archives data, and keeps the controls and data secure from cyber attacks. This is all capable with their scalable, modular package that can be expanded as a facility’s energy needs change. 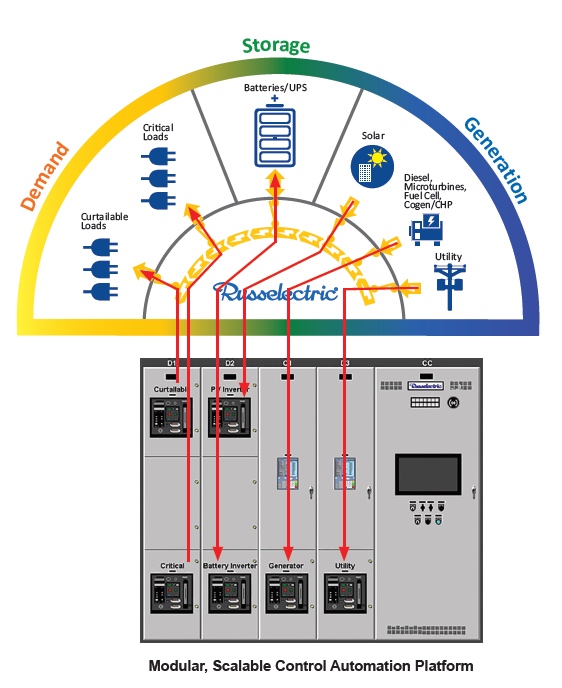 Diagram outlining the approach of the Russelectric system. Image courtesy of Russelectric

One of the key features of the Advanced Microgrid Controls Solution is its switchgear. The rapid switching during a power failure prevents systems from rebooting, shutting down, or failing. Furthermore, the disconnection is safe.

One of the challenges with backup power solutions is ensuring that the backup system does not try to energize the rest of the power grid. Imagine the scenario where a tree branch has knocked down some power lines. The power has been interrupted at a school, and a generator is brought online.

The power company sends line workers out to repair the lines, which are now turned off on their end. Instead, the school’s generator may power the line, posing a risk to the workers.

The switchgear and software integration also ensures that the power is switched on in-phase and with the proper power factor required. Because alternating current (AC) swings from positive to negative, the connections and disconnections from commercial service must be in-phase, meaning the peak of the backup power and commercial power must match. Furthermore, because the power efficiency is a function of the load (and whether it is inductive or capacitive), the system must adjust for changing loads during a power outage.

For example, suppose a site had multiple electric motors (an inductive load), but they could be turned off during a power outage. The switchgear can adjust to account for this shift in load and power factor, optimizing efficiency.

Russelectric’s Advanced Microgrid Controls Solution may have a lot of potential in backup energy distribution and energy efficiency optimization. For critical manufacturing operations, their systems can keep the lights on, regardless of what happens to the rest of the grid.