Teradyne, the parent company of Universal Robots (UR) and Mobile Industrial Robots (MiR), and the new 32 square kilometers (about 12.3 square miles) campus dubbed the “cobot hub” will host both companies to promote new partnership opportunities between them.

Teradyne is based in Massachusetts, U.S., so it is understood that the opening of the new headquarters in Denmark, next to UR’s current offices, is a move aimed at expanding into the European market, and in particular to tap into the fast-growing Danish robotics market.

In fact, according to trade association Odense Robotics, over 8,500 people working for Danish robotics companies and 3,900 of them work in or around Odense.

“The Danes’ combination of innovative industrial design, combined with a practical business sense, have created a perfect combination for this emerging industry,” said Mark Jagiela, President and CEO of Teradyne in a statement.

Moreover, figures from analyst firm Damvad confirm this growth. According to them, robotics jobs in the country will go up to 25,000 people in 2025 if current trends continue.

“Demand for Danish cobots already means that we are growing out of our current offices in Odense, both at UR and MiR,” explained Jürgen von Hollen, President of Universal Robots.

Universal Robots has been based in Odense for over a decade, so von Hollen is confident the cobot hub will prosper.

"Odense has a strong ecosystem of talent and we are pleased to have the opportunity to invest long-term in the unique robotics environment that we have been building here over the last 10 years," he added.

Although they will be sharing the same headquarters, it is understood that UR and MiR will remain independent companies.

Despite their partially different fields of expertise, it is clear from the Teradyne announcement that the two companies will collaborate on the development of industrial collaborative robots or cobots, a term that generally refers to robots designed to assist humans in close proximity and shared space.

The global demand for cobots is growing rapidly, with recent figures by Grand View Research predicting the mobile cobots market will reach $ 649.1 million by 2025.

Among the factors behind this growth would be the growing adoption in the small and medium enterprises and investments in automation of manufacturing processes, together with smart parts assembly and electronics product assembly.

Moreover, cobots are also making industrial sites safer, resulting in a decreased number of injuries and accidents occurring at workplaces. 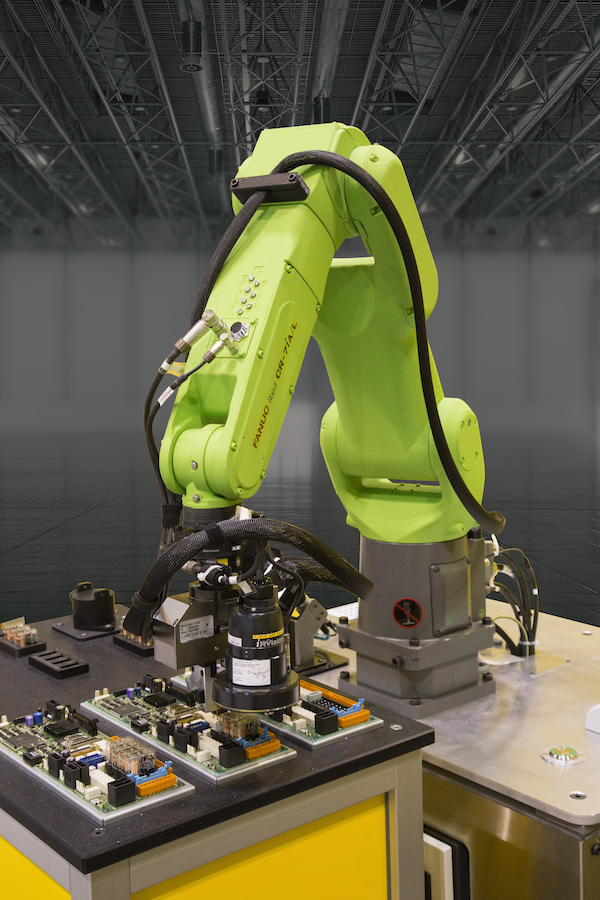 A cobot by FANUC demonstrating assembling a board.

Among the biggest adopters in the field, according to the report, would be tech giant Amazon. The company would have already adopted hundred of cobots to facilitate logistics and manufacturing processes.

Given the increasing global demand for cobots and the flourishing robotics market in Odense, it is out of doubt that Teradyne’s new cobot hub will find fertile ground for growth. An official opening date for the center has not been announced yet, but we will be covering further updates on this story as soon as they become available.

What kind of opportunities do you see coming from this cobot hub?