Cobots are poised to provide major breakthroughs in robot integration alongside the workforce.

The questions around safety are certainly warranted, as this single factor is the biggest consideration when integrating them into any project.

Collaborative robots, or cobots, are quickly gaining traction in the workforce. The strength of these machines lies in projects where ultra-precise movements and high speed are not priorities, rather being ideal for jobs that involve repetition in close proximity with human operators who can now focus on more creative tasks.

Ensuring safety has been a top priority of these robot manufacturers.

When machines and operators work together in the same environments, one common factor is almost guaranteed. A defined barrier of safety isolates all high-speed machinery from any interaction from humans, except in certain limited circumstances and operating modes. CNC machines have doors to ensure safety and keep the environment clean.

Conveyors have guards placed over every possible pinch point. Robots have physical or light-based barriers around the extents of their work envelope.

In all of these cases, the sacrifice for ensuring safety is the higher cost of safety enclosures and sensors, lack of easy mobility and flexibility, and the floor space taken up by the safety cages required for operation.

But today, the rise of cobots in the workplace brings new standards for robot-human interaction. Progress on the cobot frontier has lagged behind the traditional 6-axis robot technology, not because of control system limitations, but because of the testing and verification of the safety standards. 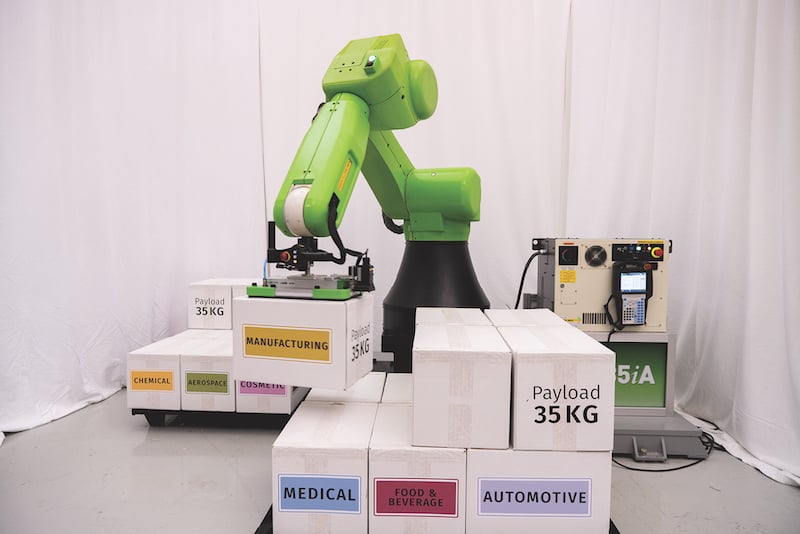 But what methods do cobots use to ensure the safety of human operators? This question has been one of the main inquiries of future investors in technology.

Safety limitations are outlined in the standard ISO 10218 and have provided a speed limit of the Tool Centerpoint (TCP) as 250 mm/sec during operations when the operator can interface with the robot. Usually, that choice involves a switch that toggles between automatic operation at a higher speed and manual control at this low speed.

Injuries occur as a result of the force of an impact. Reducing force involves lowering one of its two producing factors - the mass or the acceleration. The mass of the arm and the payload cannot be reduced, but the acceleration can be reduced to the minimum value possible.

Most of the time in manufacturing, the goal is to increase the speed as much as possible to reduce cycle times. In contrast, cobots should be reduced to the lowest possible speed in order to simply keep up with the infeed and outfeed of the rest of the system. 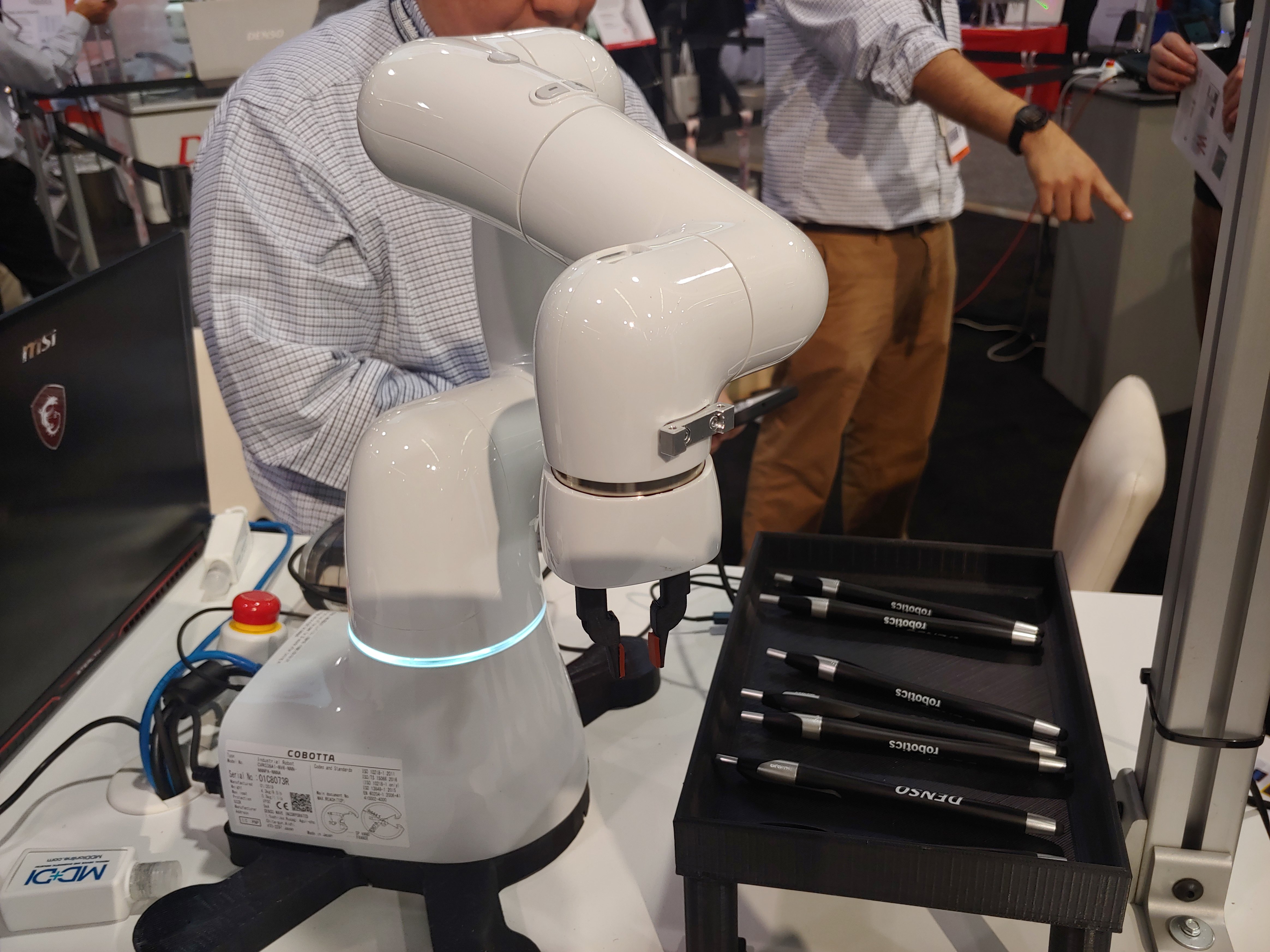 Slower speeds reduce wear and tear and will consume less power than motors running at high speeds. Running at a lower speed actually has additional benefits besides safety alone.

In the situations where a cobot is ideal, those high speeds are not necessary. They may load and unload a machine operation between cycles, and the speed doesn’t need to exceed the speed of a person. 250 mm (or 10 inches) per second is sufficient for a good number of operations.

By this definition, even a traditional 6-axis industrial robot limited to its teaching speed should be able to interact with a human nearby.

In many of these cobot systems, there is an extra amount of feedback that can be retrieved from each joint. When monitoring the amount of current required to drive each motor, the controller should be able to compare the expected current input, and the actual required current to each motor.

If the actual amount exceeds the expected amount, the robot must have either moved against an unexpected payload or run into an object.

In most 6-axis robots, there is some rudimentary force feedback that can detect hard collisions and stop the robot with brakes and a fault message. In a cobot system, the detection must be far more precise.

So precise in fact, that the end-of-arm-tool and the expected payload must be provided to the controller - both the mass as well as the center of gravity of each item. With this information, the robot should be able to determine if it collides with any item, even if the impact force is extremely small.

Fortunately, the amount of force does not usually need to be calculated by the end-user.

With the data of the tooling and the payload, the controller will come to a forced stop if the collision would result in enough force to injure the head, face or upper body of a human, since those are the areas that injury may occur with the least force. This detection can be so sensitive that even moving the robot by hand during teaching can lead to a false collision detection if moved too quickly. 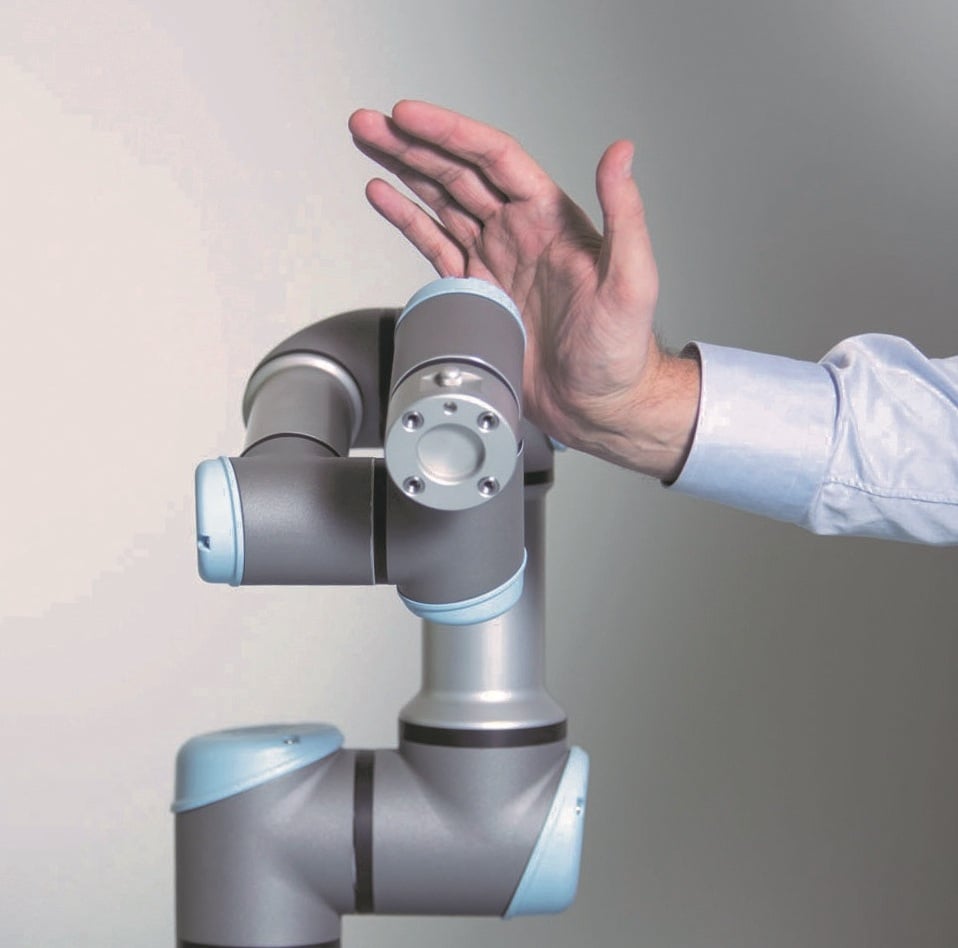 Some cobot systems rely on additional inputs to ensure safety. Some of these types of external inputs can come from area sensors that can detect the presence of humans within the work envelope and limit the speed to a safe level. This sensing ability alone does not turn a 6-axis robot into a cobot, but can create a secondary safety check.

Another sensing method involves various types of touch detection placed on the outside of the robot are. Collision detection can stop the robot before the moment of a potentially harmful collision.

But a touch detection sensing system on the outside of the arm can stop the robot without requiring that collision at all. New technologies and techniques will certainly lead to promising advances in the types of sensors used for this application.

There are a few different technologies currently used in this application from various manufacturers.

Manufacturers have designed methods of speed limitation, internal force feedback, and various external sensing to not only detect but also protect the safety of human operators.

How do you use cobots?