Common Uses of Force Control in a Robotic Cell

Common Uses of Force Control in a Robotic Cell

This article discusses force control in robots and how it can be applied in a few different ways.

What is Force Control?

Force control is a method of monitoring the forces a robot experiences during movement. During normal operation, a robot encounters a multitude of different forces based on its position in space, speed, and payload at any given time.

Monitoring these various forces produces vital information for use in the manufacturing process.

There are two systems for monitoring forces on the robot:

Internal force control built into the robot itself or external sensors mounted on the arm with feedback wires to the control cabinet.

The internal force control system is outfitted inside the robot cabinet itself and employs the servo motors to track torque or moments of force.

The third-party external system requires mounting force control sensors on the end of the arm with feedback wires to the control cabinet. Both methods provide the necessary data to monitor and adjust robot positions based on robotic torque values.

Traditional robot programming functions by sending the robot through predetermined positions, at known velocities, with little room for adjustment based on developing factors in the systems environment.

Force control sensors, internal or external, allow the robot to monitor these changes by reading the force on the arm at any given time.

The sensor works by monitoring the force vector in the desired direction and sends a signal that the robot uses to adjust the servo motors to any environmental changes.  These developments can be shown graphically as feedback for a better understanding of what the arm is experiencing during each cycle.

Using this information, a programmer can examine drops or spikes in torque in order to better program the robot for specific scenarios. The use of this function can often lead to the elimination of a significant number of sensors, and complexity in the robotic cell. 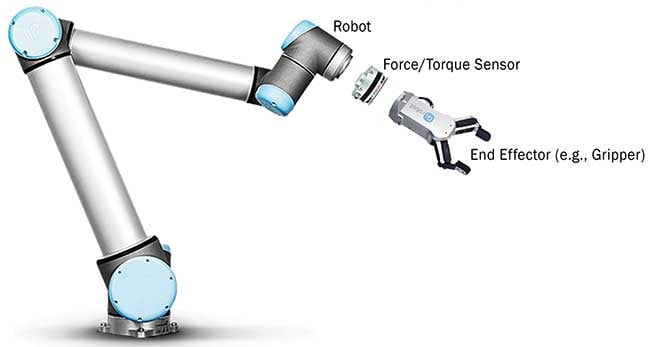 Force control is often very useful in robotic grinding, or deburring, applications.  When using standard programming methods, the robot moves through points in space at a preprogrammed velocity regardless of changing forces on the arm. This can cause problems in applications including wear parts used for grinding. For example, when a sanding belt has recently been replaced, it will grind material away from the part much faster than one that is nearing the end of its lifecycle. The difference in the force experienced on the part at a given velocity can be significant. Using force control, the robot can adjust the speed, or position of the part being abraded to create the desired finish, while also reducing wear and tear on machinery.

Torque feedback can also be helpful in a process where parts of different lengths are being handled. In this case, the robot searches in a known direction to find the location of the part, creating a pick point, that must then be retained in order to relay position data to other collaborative robots in the system.

One example of this is a welding cell with multiple robots. A beam is placed at a known location with a robot positioned at each edge.

Robot #1 pushes the beam in the direction of robot #2, which sits stationary, waiting to stop the beam when it reaches its location. robot #1, or the "pusher" robot, moves toward the beam until they touch and a torque spike in the force control notifies Robot #1 that it is now pushing the beam. Robot #1 continues to push the beam toward Robot #2, of the "stop" robot.

Another torque spike signals when the beam contacts robot #2 and robot #1 stops pushing. Robot #3, the welding robot, now knows the length and location of the beam in space based on the force control feedback from robots #1 and #2. Since Robot #3 has constant, accurate weld placement information, it can avoid making several searches to find the joint to be welded, saving time and reducing the margin of error.

Part fit-up of precision parts often leads to binding if the parts aren’t aligned exactly.  With force feedback, a robot can adjust alignment when inserting tight-fitting parts into one another.  Instead of following a preprogrammed path, a robot can essentially “feel” when the parts start to bind and change paths accordingly. A torque spike signals when the part bottoms out in the fit-up, notifying the robot that the part is in its final position, and it is now clear to move to the next task.

A specific method of part insertion is twisting or rotating two parts, to lock them together. This method requires a robot to grab a part from a pick point and press the part against a receiving half. It then rotates and pushes the part until it achieves the correct orientation and the two parts join and lock together. An example of this type of fit-up is robotically placing a wheel on a car. A robot picks the wheel and moves to center it on the bolt pattern until the wheel slightly presses against the lug nuts.  The robot then turns the wheel on its axis until it slides onto the studs, creating a sudden decrease in torque on the robot. After the drop in torque, the robot stops spinning the wheel. It can then push the wheel onto the studs until it sees another torque spike, letting the robot know it had pushed the rim all the way onto the car. 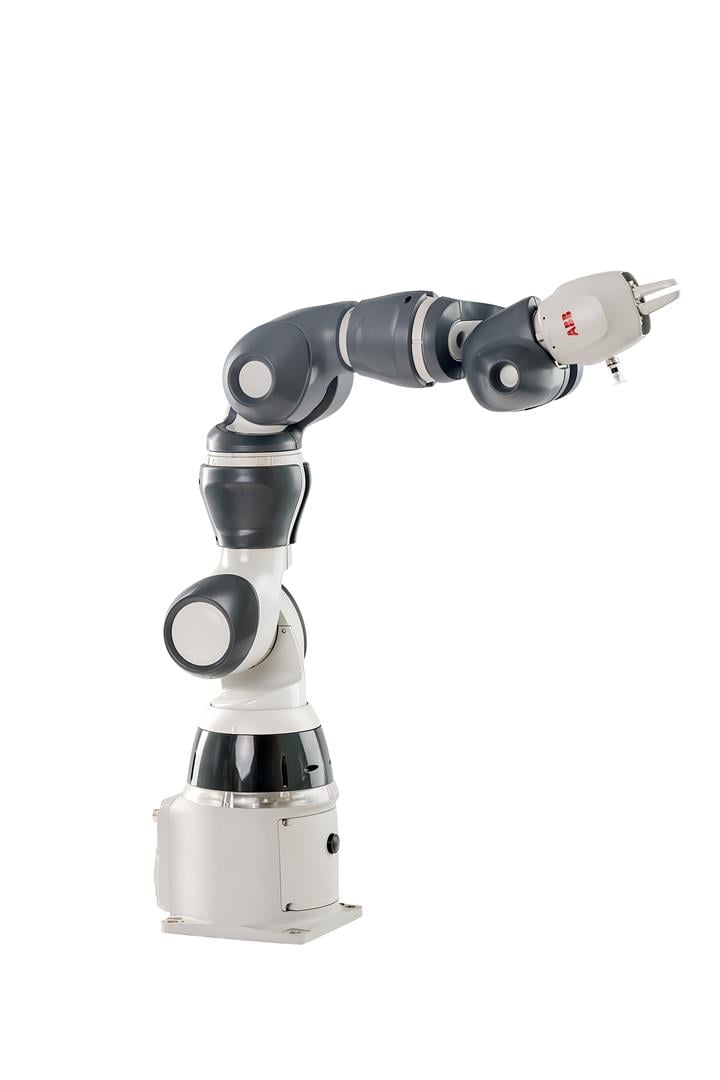 Robotic arm made by ABB. Image used courtesy of ABB.

The various applications described are only a few of the ways force control can be used to reduce the number of sensors necessary on a cell. When implementing force monitoring on any robotic system, be sure to follow the manufacturer's recommendations before attempting to program the system in an unconventional manner.

Keep in mind that some robots may not be available with internal force control and will require a retrofit using an external system. On the other hand, robots outfitted with an internal feedback system are often priced higher, as force control is considered an extra accessory in the robot package.

Be sure that the additional cost will be offset by the versatility created in the robot. Sometimes a simple sensor will do the job as effectively for a much lower cost.

How do you use force control? Let us know in the comments.