The Role of Industrial Robots in Workplace Safety and Efficiency

The Role of Industrial Robots in Workplace Safety and Efficiency

Industrial robots have replaced many of the dangerous and repetitive tasks that workers have faced in manufacturing.

But they have far from replaced the workforce. They have made vast improvements in production rates, safety records and the ability of companies to respond to global competition.
Robots are not a new kind of technology at all.

They are especially not new within the confines of manufacturing. Most kinds of robots fit within a few categories. In this article, we explore the most common robots and discuss their capabilities and weaknesses for certain applications. 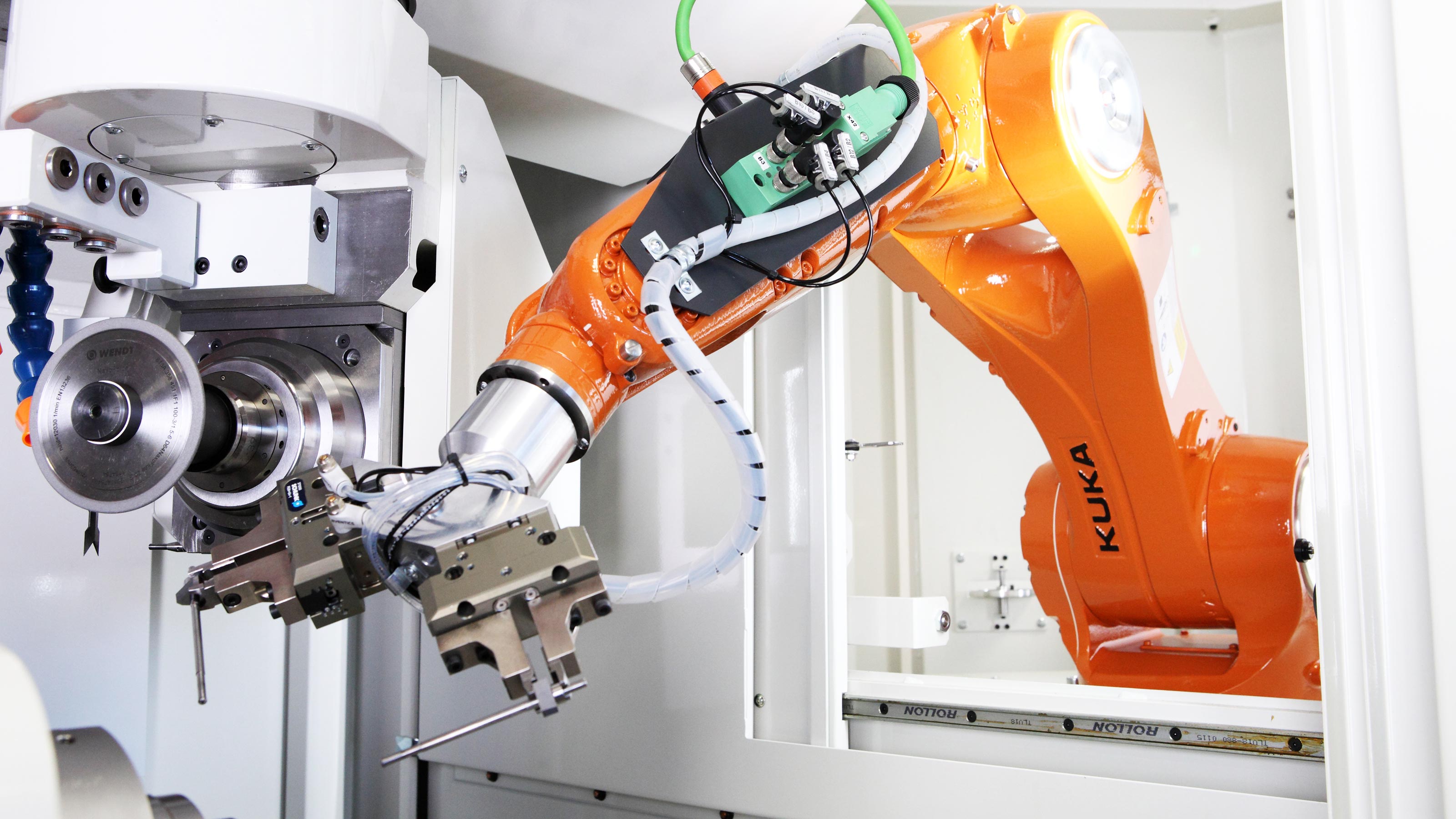 Industrial robot applications can be broadly placed into two categories - those that move, and those that are stationary. Both are common, depending on the type of process being automated.

Robots that move of their own accord are usually found in facilities that distribute and handle materials. They can also be used to move finished products, load trucks and retrieve raw materials at the beginning of a manufacturing process.

In all of these applications, you could think of these mobile robots as completely automatic forklifts, although their size and shape can vary greatly between applications. If you have ever seen a video of an Amazon Fulfillment Center with the orange robots retrieving items to be placed in boxes - this is a perfect example of mobility in industry.

These robotic systems require some pretty impressive control strategies. Sometimes, a line is placed under the surface of the floor carrying a current, able to be sensed by a magnetic field sensor. Another method is to use dark-colored tape where InfraRed (IR) light sensors can follow the tracks. If there is no floor navigation pattern available, the last resort is using vision processing, or arrays of sensors to detect objects and avoid collisions. Definitely a lot of variables to consider when designing mobile systems. 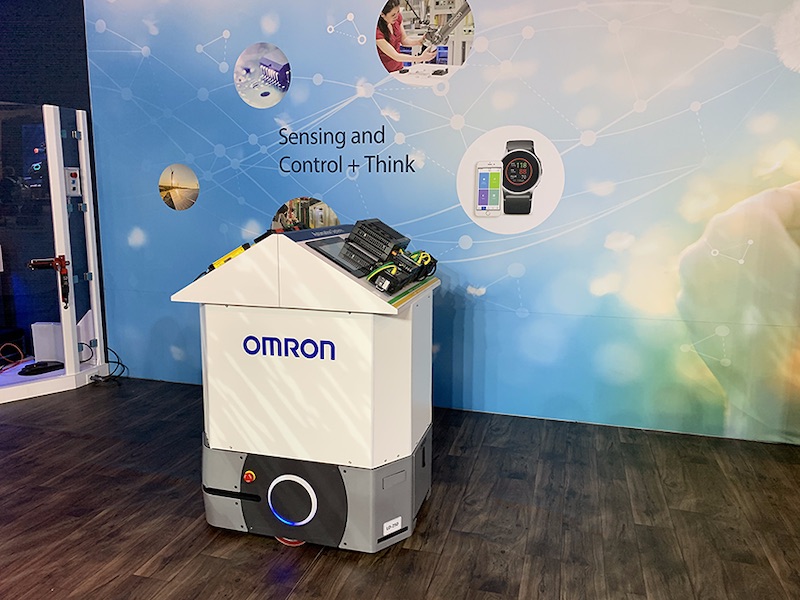 Photo of a mobile robot recently released by Omron on the ATX West showroom floor. Image used courtesy of Omron.

Not all mobile robots have wheels, even if that’s the most classic revision. In some manufacturing processes, Intel computer processors, for example, robots fly overhead on gantry networks like automated cranes. They move the semiconductors from one step of the process to the next, carefully and quickly moving millions of dollars worth of product with each calculated movement.

These gantry crane types of mobile systems have actually existed for many years, being used as Automated Storage and Retrieval systems to supply parts for huge assembly lines.

Usually, fixed robot platforms are the stereotype of industrial robots. The classic view down an auto manufacturing assembly line with dozens of robots outfitted with grippers, welders, and paint sprayers - that’s the normal mental image of a robot application. Hundreds of thousands of robot arms are employed all around the world, usually given the tasks that are harmful, dangerous or repetitive for human operators.

Let’s break down a few more of the categories fitting these fixed industrial robots.

Although this type is the most typical, it doesn’t have a generally accepted name or title. In fact, they can also be found to have only 4 or 5 axes of motion. The number of axes is a quick way of stating how many joints, or degrees of freedom given to a robot. Most typically, 6-axis is the idea robot which can reach anywhere within the range of its fully extended arm, called the “work envelope”. Those arms with only 4 or 5 axes can still extend to its full reach, but is unable to articulate around to reach some areas within that work envelope.

When a robot arm like this is purchased from the manufacturer, it usually lacks any sort of gripper, or End-of-Arm Tool (EoAT). Since they can be used in nearly unlimited applications, it’s the responsibility of the end customer or their integrator partner to construct the right kind of tool to help accomplish its job.

The size of these robots can range between a spherical work envelope with only a 4 or 5-foot diameter, up to some monsters that can lift hundreds of pounds easily between two floors of a building. Most robot manufacturers can supply robots throughout this size range.

Traditionally, these robots must be quarantined in a work area of their own, safely out of reach of a person or other equipment nearby. This is expensive and not very space-efficient, not to mention being difficult to modify in the future. These limitations have given rise very recently to a trend of “Collaborative Robots” or “Cobots” which can co-exist with human operators safely. This removes many of the restrictions that made them doo difficult and expensive to place into small operations in the past.

Selective Compliance Articulated Robot Arm, or SCARA. This type of robot is known for its speed of motion while being able to pick and sort items. Usually integrated with a camera for vision, it excels at conveyance systems where it can re-arrange items, remove imperfect items, and distribute items by color or material. 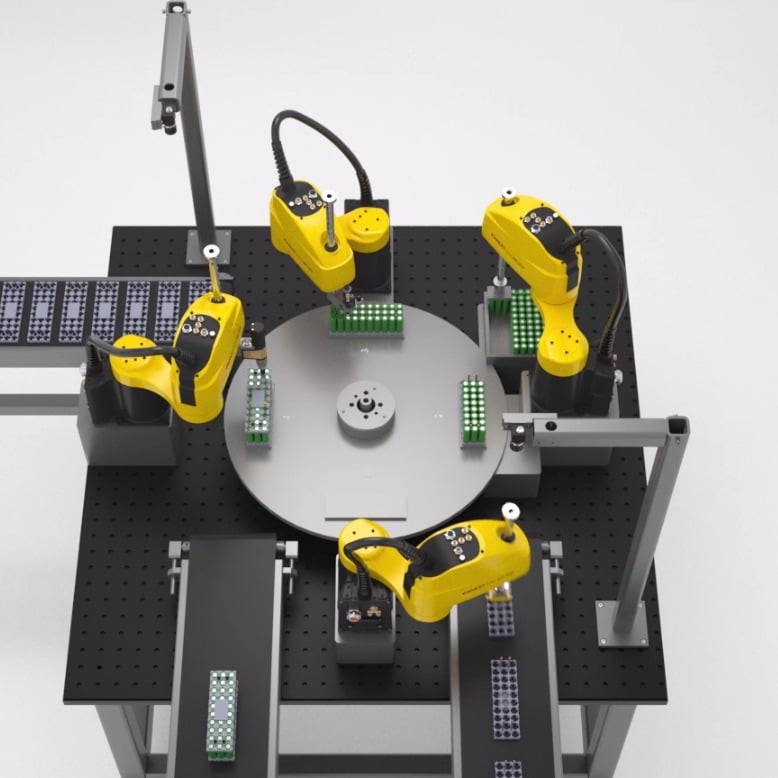 They lack the joints and degrees of motion given to the fully articulated arms. Usually, they rotate around a center post, with another rotation ability at the end of that joint. A final linear motion allows the gripper to extend up and down to pick up and drop off small items. Usually, they are on the smaller size, having payload capacities of no more than just a few pounds.

An advantage of fewer joints is a heightened ability to control accuracy, since each joint compounds the inaccuracy and repeatability of motion instructions.

This type of robot is also known for its amazing speed, making it another excellent choice for small pick-and-place applications. It consists simply of 3, or sometimes more motors in the base, which allows the gripper area to be extremely lightweight and maneuverable. The three motors extend or retract 3 vertical arms, all connected to a triangular plate at the end, where the gripper is located. Usually, the base is attached above the assembly line with the arms extending below it. 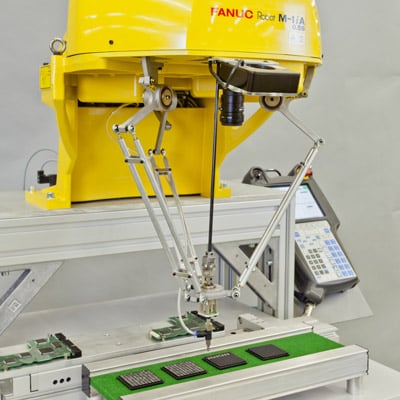 The main disadvantage of this type of robot is that the work area only consists of a small circular area directly underneath the base. In addition, due to the geometry, the gripper cannot rotate much at all. It’s excellent for picking something up off of a belt, moving it, and placing it, sometimes up to several repetitions every second. These robots have even been used to drive the extruders of some 3D printers.

Robots exist to perform high-speed tasks that are monotonous and repetitious, or they have an element of hazard or injury, or they are located within dangerous environments. Companies that are interested in worker safety have no business exposing employees to such conditions.

With the right strategies, robots do not replace the workforce, they increase production rates and free the workforce to accomplish tasks that bring more enjoyment, advancement, and satisfaction in their careers.

Do you use any of these robots in your workplace? Have you seen the advantages of implementing them?