Robotics Research Companies and Universities are Teaming Up

Researchers at the University of Maryland, Baidu Research Robotics, and Auto-Driving Lab published a paper on June 30, 2021, in Science Robotics to document the results of their efforts and their research process.

The autonomous excavator system (AES) combines different technology to create a system that can keep up with the demanding environments that excavators often operate in. It uses perception, planning, and control algorithms in real-time to adapt to a continuously changing environment. LiDAR, cameras, and proprioceptive sensors are all part of a system of sensors used to provide feedback to the excavator during operation. 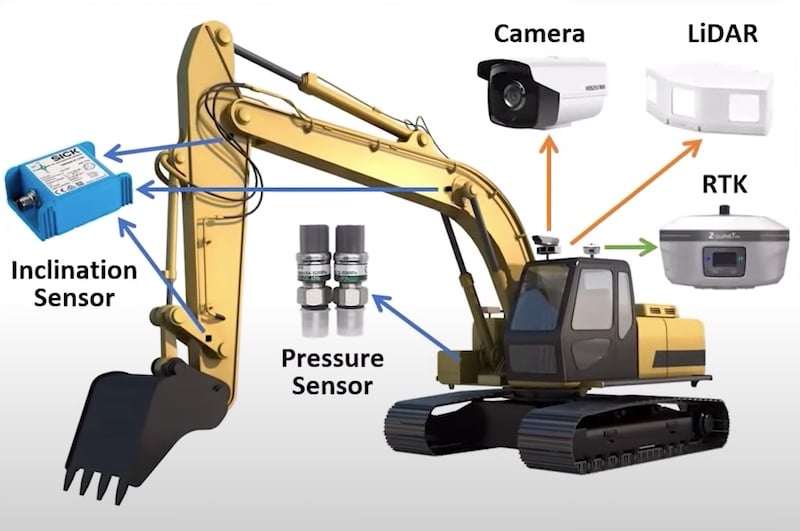 An overview of the hardware in the AES system. Screenshot used courtesy of Baidu Research

The sensors create a perception module capable of understanding a 3D environment and can be used to identify different target materials. An advanced algorithm is used for creating a dedusting neural network to generate clean images. The system is designed to be modular, capable of being used on everything from compact excavators to 49 metric ton large excavators.

This AES was tested in a waste disposal site, which constitutes an environment traditionally harmful to equipment operators. Researchers went to a leading manufacturer of excavators to better understand the usefulness of the system. They tested the system on excavators of different designs and sizes in challenging environments. The test provided helpful results, and the AES could operate without human intervention for 24 hours.

The AES went through other testing environments, including one in extremely cold temperatures where vaporization can create issues for LiDAR. In wet or dry conditions, the system can move 67.1 cubic meters per hour, similar to the amount of material moved by a human operator in a compact excavator.

"AES performs consistently and reliably over a long time, while the performance of human operators can be uncertain," mentioned Dr. Zhang.

These researchers believe that the new AES shows promise for creating autonomous excavators capable of working in real-world applications. The system has gone through several different testing phases and has managed to operate at similar rates to human operators. The AES aims to decrease human danger and increase safety and automation in the construction industry. Baidu Research Robotics and Auto-Driving Lab and the University of Maryland, College Park plan to continue their research into creating a fully functional autonomous system with refinements to the module in different extreme environments.