An Introduction to Simultaneous Localization and Mapping (SLAM) for Robots

An Introduction to Simultaneous Localization and Mapping (SLAM) for Robots

SLAM for robotics utilizes mapping and localization for accurate movement. This article covers the architecture of a mobile robot running SLAM and the different broad classifications withing SLAM.

This article is an overview of SLAM, covering the architecture of a mobile robot running SLAM and the different broad classifications of SLAM. Mobile robots can be wheel-based, biologically-inspired bipeds and quadrupeds, drones, and hybrids. However, this series of articles on SLAM limits the scope to wheel-based mobile robots only.

As the name suggests, SLAM comprises mapping and localization. It is used for outdoor and indoor navigation in environments with sufficient landmarks, distinct features, and navigable terrain. SLAM’s process involves a robot simultaneously creating and updating real-time maps of its environment while navigating the same and also locating its own position with respect to the map.

Noisy environments, high-dimensionality, and correspondence are some outstanding challenges for robust SLAM solutions. The most common applications of SLAM include the deployment of robots in unexplored environments like disaster sites, underwater, extra-terrestrial locations, and more.

SLAM is a highly stochastic process as all the computations and results are expressed as probabilities, which ideally converge over time and, with a repeated exploration of the world,  create stable values.

When navigating autonomously through an unknown environment, the robot keeps a track of its estimated (probabilistic) pose with reference to a global static frame usually located at its start point or a previous pose frame. Using its sensing mechanisms, it also interprets the world around it and creates a probabilistic representation of the constituent elements with respect to a fixed global frame of reference.

The complete autonomous robot navigation stack comprises localization, cognition, control, and perception stacks. Each of these contributes to a successful SLAM implementation.

Robot control refers to executing motion based on the intent of the system. In simpler terms, it ensures that the robot does (tracks a trajectory/stops/makes a zero-turn) what it is instructed to. Cognition is responsible for generating the desired tasks for the robot. It may involve breaking down the high-level tasks (like robot vacuum cleaning the floor) into simpler floor area decomposition and robot motion planning sub-tasks.

A standard mobile robot has a chassis with wheels for motion. Each individual wheel motion contributes to the desired motion for the complete robot. The forward direction along the central longitudinal axis of the robot is called the heading. The center of the robot is the origin of the robot local frame and all its poses are defined for this point. The angle that the heading/X-axis of the local frame makes with the global frame X-axis is called the orientation.

Different drive mechanisms have different kinematic models and control inputs. For instance, a differential drive or a holonomic drive robot needs a velocity command for each wheel, while an Ackerman drive needs the throttle and steering angle inputs. The relationship between the control inputs and the Cartesian pose of a robot is called forward kinematics while inverse kinematics is the other way round. 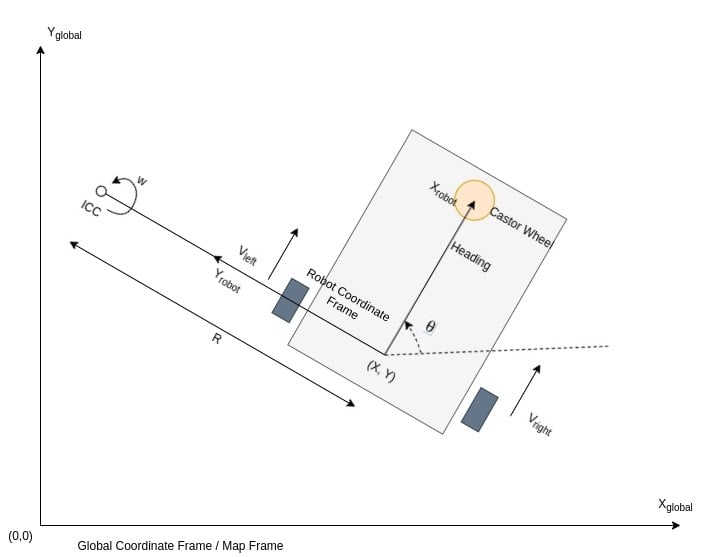 Sensors are used to measure the robot’s own pose as well as interpret the environment and objects within, to create a map of the same. Sensors are responsible to implement closed-loop feedback for control as well as safety features.

Poor sensor quality, noisy measurements, and inaccurate robot models exacerbate the stochasticity in SLAM. Thus, the mobile robot sensor suite ideally has redundant sensors for each type of measurement. The two broad categories of onboard sensors are interoceptive and exteroceptive. Interoceptive sensors measure different physical parameters of the robot itself while exteroceptive sensors interpret different aspects of the external world. Note that we are only covering sensors relevant to SLAM in this article.

An IMU is a packaged accelerometer, gyroscope, and magnetometer. The sensor information is fused together in the IMU to obtain odometry information for the robot. This is the standard packaging used instead of the individual constituent sensors. Indoor environments are called GPS-denied locations which pose more challenges for SLAM 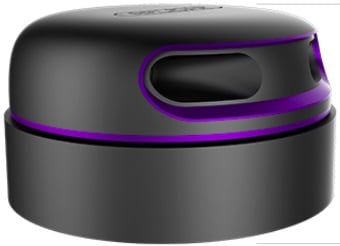 Based on the primary sensor used, type of information processing, and types of maps processed and generated, there are several classifications of SLAM.

Full SLAM and online SLAM are two categories based on the type of map and pose information on the process derives.

Online SLAM is a subset of the above and only computes the current robot pose. All computations are done recursively and several algorithms are used to update previous measurements due to loop-closure or other significant events.

Based on the type of sensor primarily used for exteroception, there are two broad categories: one uses computer vision, and the other one uses rangefinders.

Visual SLAM utilizes the feed from a camera to implement SLAM. There are several sub-types of visual SLAM depending on the type of camera and the processing done on them. MonoSLAM uses a single camera for real-time SLAM while RGB-D SLAM uses depth information along with RGB images to interpret the environment as well as derive the robot’s odometry.

Review of SLAM and Next Steps

SLAM is a huge field and comprehensively discussing all its aspects is overwhelming. Defining the objectives and involved tasks for each smaller problem within SLAM is vital towards creating a feasible SLAM solution.

The next article in this series formulates SLAM for computational interpretation and explains mapping and localization in depth. Since SLAM is a vast field, it is important to know the extent and challenges of all sub-domains and only pick relevant ones for the system to solve.