One of the most common types of structural materials failures, fatigue failure is the repeated deformation of a material until it breaks. This sounds simple; virtually everyone has bent a paperclip back and forth enough times to break it. However, this demonstrates a high-stress, low cycle-count test, which is not typically how materials fail when they are in use.

What Is an Amorphous Material?

Every material is made of base elements found on the periodic table. Most common materials are not a single element, but alloys and other unique combinations that lead to various mechanical and electrical properties. Depending on how the materials are formed, they may adopt certain crystal structures called “crystalline” in nature. Semiconductors are a perfect example, with the manufacturing process generating nearly perfect wafers of mono-crystalline material.

Many materials have no discernable crystal structure, and these belong to the “amorphous” group. Some examples include glasses, rubbers, and plastics, as well as some samples of metal alloys. Since the crystal structures are so different, nearly every property is dramatically different, including failure due to repetitive loading and fatigue.

To understand fatigue failure, one must first understand the relationship between stress and strain, as well as elastic and plastic deformation. Stress is a specific application of pressure: the force over a cross-sectional area. Strain is how much a material lengthens when it is stretched.

Materials are loaded in a mechanical tester and stretched. The machine stretches the material at a constant rate, and the stress on the material is measured and plotted as a function of strain. An example is shown here: 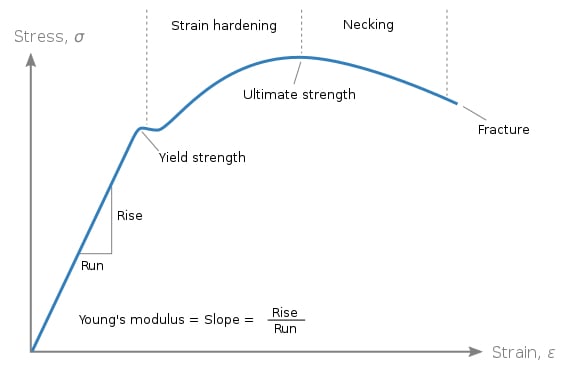 Fatigue in the Elastic Region

Fatigue is such a tricky phenomenon to track because fatigue failures can occur even if the material is only in the elastic region, where ideally it should always return to its original shape with no permanent damage.

To measure fatigue, materials are stressed repeatedly at a certain value until they fail. Then a new stress is selected, and a plot of stress versus the number of cycles is generated. This stress and number (S-N) curve is used to predict the number of cycles until a part fails. An example of this curve comparing aluminum and steel is shown here: 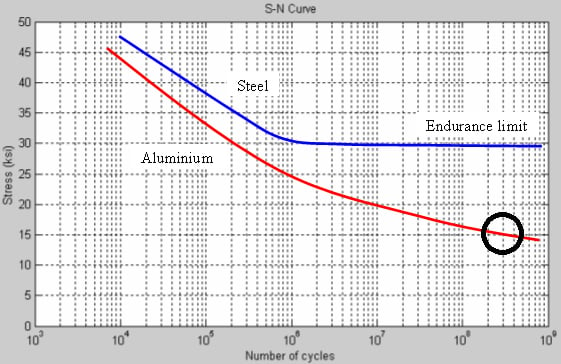 Figure 2. S-N curve for a steel alloy versus an aluminum alloy. Image used courtesy of Wikipedia

In Figure 2, the aluminum alloy has a number of cycles to failure, even at low values of stress. For example, at a stress of 15,000 psi, the material is good for 2x10\(^8\) cycles, indicated by the circle on the curve. Notice the steel sample has an “endurance limit,” which means that stresses below this value will not cause the material to fail by fatigue.

The high number of cycles is misleading. It sounds like 200 million is a lot of cycles, but suppose this was the cyclic stress on an engine’s crankshaft, spinning at 2,000 rotations per minute. The crankshaft might fatigue at under 3,500 hours, or roughly one trip around the beltway at rush hour in Washington, D.C.

These graphs work well for ductile metals. Under a microscope, the metals have a microscopic grain structure. As the material is stressed, it can slide ever so slightly along these grains. Over repeated cycles, these movements can organize into cracks that will eventually cause the material to fail. 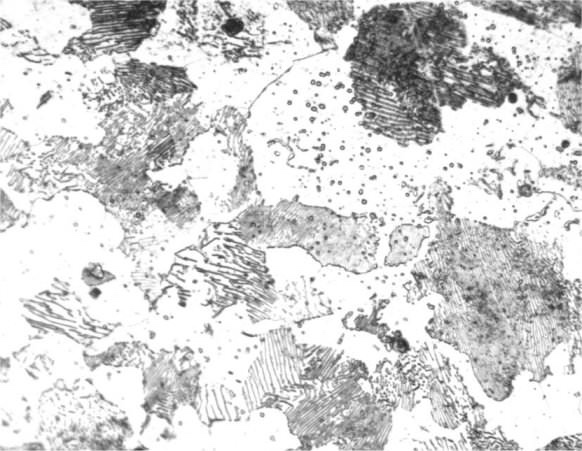 Imagine, instead of stretching a metal rod, we are trying to stretch a glass rod. It will most likely shatter under only a little strain. Furthermore, if another glass rod is tested, it may be entirely different. Glass and other brittle materials are governed by defects. Amorphous materials, such as glass, have no such granular microstructure. In fact, they have no long-term order at all, meaning the atoms in the glass rod are bonded in a haphazard way, and failure is inconsistent.

This disordered structure makes fatigue testing much harder to study. While most metals have a predictable yield point and a wider region of elastic deformation, glass and brittle materials do not. Many tests are required in order to get any sort of usable data, and even then, they can still fail unpredictably in service.

Instead, researchers at the University of Tokyo decided to leverage computer modeling to conduct these tests instead of trying to break thousands of glass rods. With the computer model, they figured out the spatial density, velocity, and other terms to simulate where failure would occur. They identified several modes of fatigue failure and even varied some of the input parameters, laying the groundwork for future questions, such as how temperature may affect the number of cycles.

Right now, there may not be many applications where a ceramic must survive many repeated cycles. Ceramics rarely fail in fatigue. However, this has more to do with nobody designing ceramics and other brittle materials to be in a location where they could fail through fatigue. Because of the brittle failure mode, ceramics tend to be used in compression, where they are strongest, not put under tension, and rarely subject to cyclic loading.

If mechanisms for brittle failure are better understood, which is a necessary byproduct of fatigue testing, perhaps there will be new ways to strengthen some of these brittle materials and use them in tension or cyclic loading conditions.

The promise of these findings and the research from the University of Tokyo is not what it can do for industry today, but rather what it could make possible in the future as different materials are leveraged for new, innovative devices and processes for automation.

Featured image used courtesy of the University of Tokyo