How to Troubleshoot Encoders with an Oscilloscope

How to Troubleshoot Encoders with an Oscilloscope

In this article, learn the different errors that keep an encoder from working correctly and how to troubleshoot issues using an oscilloscope and other T&M tools.

The encoder is an electro-mechanical device used to identify the angular position of the shaft of a motor by converting mechanical motion to digital signals. Rotary encoders are the most commonly used variety of encoders, although there are niche use cases for linear encoders. 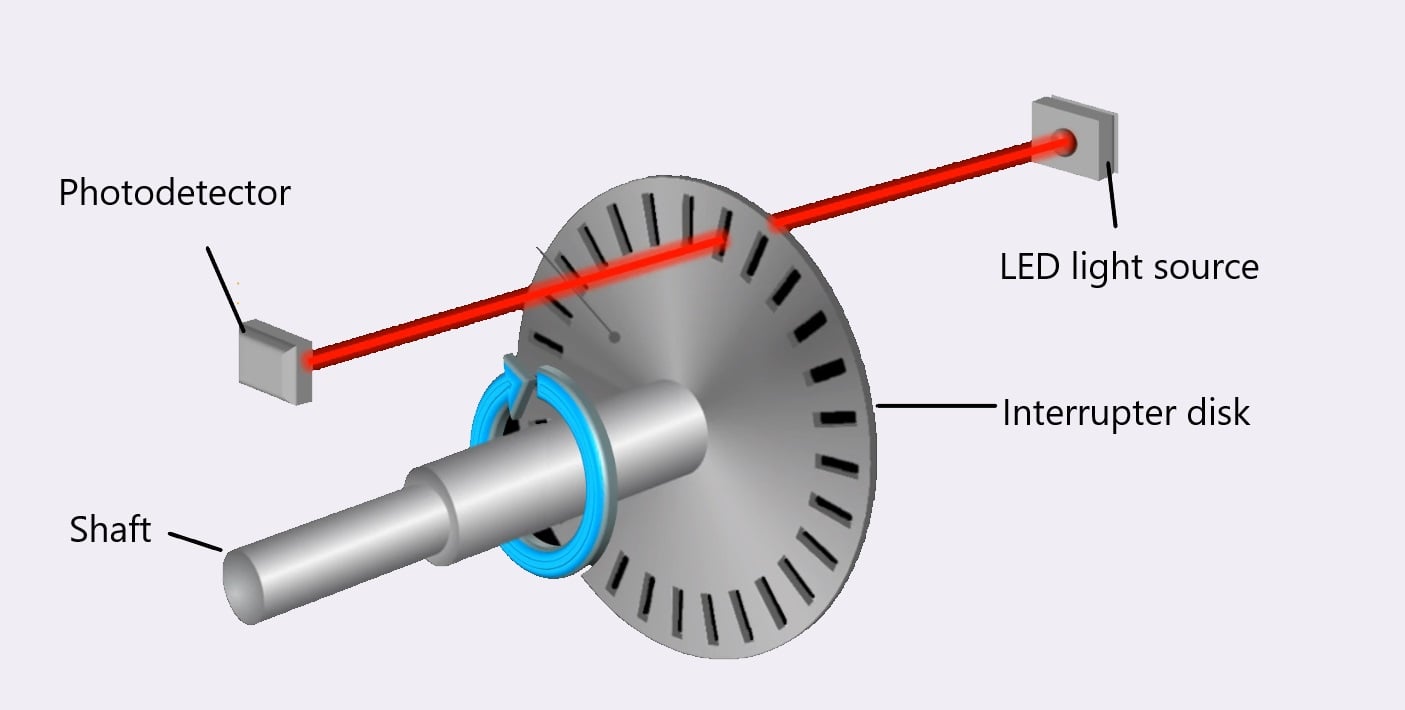 In most cases, at least two channels are cut out on the interrupter disk. Encoders with higher resolution requirements have multiple channels, sometimes up to a dozen. The photodetector outputs a pulse of maximum voltage when light hits it and there is no voltage when there is no light. Therefore, the output from the encoder will be digital signals. If the encoder has a single channel interrupter disc, there is only a pair of output cables.

An oscilloscope is required to test an encoder. An oscilloscope is a test instrument that displays varying voltage to be tested on a two-dimensional graph as a function of time. They can be used to observe and compare the amplitudes, frequency, and direction of the signals from an encoder.

The cut-outs on the interrupter disks are designed in such a fashion that the output signal from one channel will be, in equal amounts of time, high voltage and low voltage. The output from the encoder can be observed as a square wave with a 50-50 duty cycle due to this reason.

The duty cycle is a fraction of the period in which the signal is active, where period refers to the time taken to complete the on-off cycle. The two channels in the interrupter disks are designed in such a manner that they are offset 90° from each other. This offset helps to distinguish between the clockwise and counterclockwise rotation of the rotor.

Figure 2. Signals from the two channels

When there are troubles with an encoder’s operation, it is advisable to check the mechanical and environmental factors before troubleshooting it. It may very well be a case of shorted wires, loose coupling, or other environmental issues. Basic checks like checking the input voltage and the wiring connections must be done before going to the next steps in troubleshooting. If a similar working encoder is available, swap it with the encoder in operation to determine whether the problem lies with the troublesome encoder.

A simple multimeter can be used to measure the parameters of an encoder. A multimeter can measure the average voltage, peak voltage, frequency, and duty cycle of a rotary encoder. This can be compared against the standard output indicated by the manufacturer and can determine whether the encoder is faulty or not.

In most cases of trouble with an encoder, the values measured by a multimeter would appear to be normal even if the encoder is experiencing some trouble. In such cases, an oscilloscope is a must for troubleshooting.

Jitters appear as backward and forward movement of the pulse on an oscilloscope. Jitters are caused due to a decentered interrupter disk. As the decentered disc moves within the casing, the two channels appear to move relative to one another. This will cause the phasing between channel A and channel B to change every rotation.

When the leading or trailing edges of the output pulses are elongated, the counts of the number of times a cut-out on a channel is crossed can be read incorrectly. This can lead to the speed and the position of the shaft to be calculated falsely.

Mounting issues are the common cause of extended encoder pulses. A small and occasional effect on the pulses may be due to a loose coupler and is an easy fix. When a loose encoder turns with the motor shaft, it shows as broad, extended pulses on the oscilloscope. Extended pulses do not signify a problem with the encoder. Rather, the problem is likely due to poor mounting of the encoder with the motor and can be fixed with a proper reinstallation of the device.

Low amplitude signals appear to be square waves but the amplitude is quite a bit lower than the specifications of the device. The amplitude of the signal will be too low to be read by the controller or PLC. This is commonly due to poor wire connections or crosstalk from different channels. Again, this reading does not indicate a faulty encoder. Checking the connections and reconnecting the encoder will sort out this issue.

The rising edge of the pulse has some delay to reach the full amplitude. On the oscilloscope, it appears as a rounded curve similar in shape to a shark fin. This hinders the controller or counter cleaning detecting the pulses. This could be due to long cables that are used to transport output signals. Low capacitance, twisted pair cables can be used to reduce this distortion.

Other reasons for the delay could be the load, speed, and/or the resistor of the encoder. In general, when the resolution of the encoder is high, the time delay will be higher.

With stepped encoder pulses, the output signals on the oscilloscope will appear to rise and fall in amplitude in multiple steps than a single step. This makes it difficult for the receiver of the signals to accurately count and causes an error in speed and position calculations. The steps will appear identical in all of the channels. This error is due to the shorting of various cables on the output side of the encoder and can be easily rectified by removing any stray wires, open insulations, or the shorted cables.