Learn about the considerations that must be accounted for when designing process controls for pH neutralization.

Whether you need to achieve a target pH as part of a manufacturing process or to neutralize a waste stream, pH control is both a common and complex issue in the world of process control.

This article presents various methodologies for pH neutralization, although the concepts can be extended to other target pHs.

To recap from my previous article on the applications and challenges of pH control, Figure 1 shows the basic setup of a neutralization reaction realized on a process scale.

The subsequent sections will explore variations of this setup, but they all share some common components, namely:

Note that in the following scenarios, it is assumed that the titrator and its concentration are both constant and known.

Batch Reactor with One or More Known Titrands

In this situation, the titrand and its concentration are known, as well as the total volume of titrand, either by the use of a level transmitter and volume calculation or an assumed constant volume in the vessel.

When a specific titrand’s volume and concentration are input, a simple calculation, given below in Figure 2, can be performed in the controller logic to determine the exact volume of titrator needed to complete the neutralization process.

Figure 2. The equation to determine the amount of titrator necessary for neutralization

Also note that this calculation can be extended to a blend of multiple known titrands. The total volume of titrator to be added will be the sum of the volumes of titrator necessary to complete the neutralization reaction of each titrand individually.

If the titrand and its concentration are unknown, variable, or performing the required calculation in the above scenario isn’t feasible, relatively small doses of the titrator can be fed into the reactor vessel until the target pH is achieved.

Due to the likelihood of the neutralization reaction being nonlinear, allotting for ample mixing time between doses is imperative in order to avoid overshoot of the target pH.

In a continuous flow reactor, untreated solution is constantly displacing the solution being treated in the reactor vessel. It is, therefore, of paramount importance that the reactor vessel has a large enough capacity to provide adequate retention time to achieve neutralization before the solution exits. This includes time to feed the titrator, mix titrator and titrand, and sample the pH in a cyclic fashion. As a rule-of-thumb, anything less than 20 minutes will cause the performance of the system to suffer.

Similar to the second scenario, if the titrand is unknown, variable, or performing the required calculation isn’t feasible (which is likely in a continuous flow system, unless the titrand can be sampled upstream in order to identify its concentration), an unknown quantity of titrator must be fed to complete the titration. Unlike the analogous batch reaction, there is limited time in which to feed the titrator.

Due to this limited amount of time, the dosing methodology employed in the previous scenarios is rendered inadequate. As mentioned previously, even a well-tuned PID loop is likely to struggle to maintain the pH at a target setpoint.

Instead, certain algorithms may need to be employed to determine an appropriate,variable feed rate for the titrator. This could be as simple as a few if/then statements or as complicated as a model predictive controller. The variability in the solution to be treated, along with the deviation tolerance from setpoint for the process, can help determine how complex the algorithm needs to be. 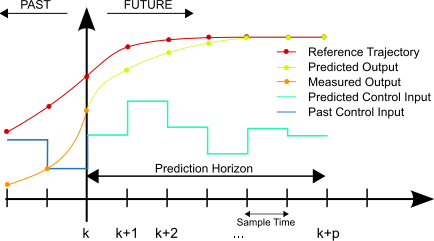 Regardless of the specific control strategy employed, additional analytical measurements may strengthen its resolution, such as an upstream pH or flow transmitter. Measurements such as these can be used in a feed-forward fashion, in the case of the pH probe, or to help adjust feed rates based on variable incoming flow, in the case of the flowmeter.

pH transmitters can be slow to update, which introduces lag into the measured variable. This should be taken into consideration when selecting dosing rates or feed cut off points.

Some streams may naturally have a high buffering capacity, which dampens the non-linear characteristic of titration reactions. In this scenario, linear controllers, such as a PID loop, may be a viable option. Even if a buffer isn’t naturally present in the constituent stream, it may be possible to add one depending on the process involved.

Keep in mind that this article is not all-inclusive and other strategies for pH control exist. The selection of an appropriate control methodology also depends on factors other than those discussed in this article.

While achieving a target pH may be more involved than, say, controlling a level in a tank, with a well designed and properly programmed control system, it is within reach.