Plug and Play End of Arm Tooling for Cobot Applications

Plug and Play End of Arm Tooling for Cobot Applications

In the world of modern manufacturing, we want the tools to be effective, safe, and very easy to install and commission. But when we say ‘easy’, how easy can it really be to commission robotic tools?

What Does ‘Plug and Play’ Mean?

There has been a recent influx of ‘plug and play’ options for robotic systems. But what exactly does ‘plug and play’ mean, and how does it actually look for end users? There are several companies on the market that have developed new methods for programming end applications that are designed to be easier and faster to integrate robotic systems into different applications. Their systems have been designed to fit into common applications, such as palletizing, welding, or bin picking, with adjustable and changeable parts and intuitive programming. They act like legos that fit together to complete the task at hand. This modularity has also been extended into the software and programming methods for their robotic systems. The systems are equipped with premade programs that can be adjusted and molded to fit specific applications.

A good example of this plug and play concept is Robotiq’s lineup of products. Robotiq is commonly found as attachments or systems that complement cobot manufacturers such as Universal Robots. Robotiq was created in order to make the process of integrating cobots into the manufacturing process easier and less expensive than it has been traditionally. Programming and configuration are usually a significant part of the cost of robotic integration. The idea behind Robotiq is to reduce these costs and make programming and system configuration possible for workers who may have little to no experience with robotic programming. Robotic End of Arm Tooling (EoAT) costs are also reduced with the addition of pre-manufactured and programmable EoATs. 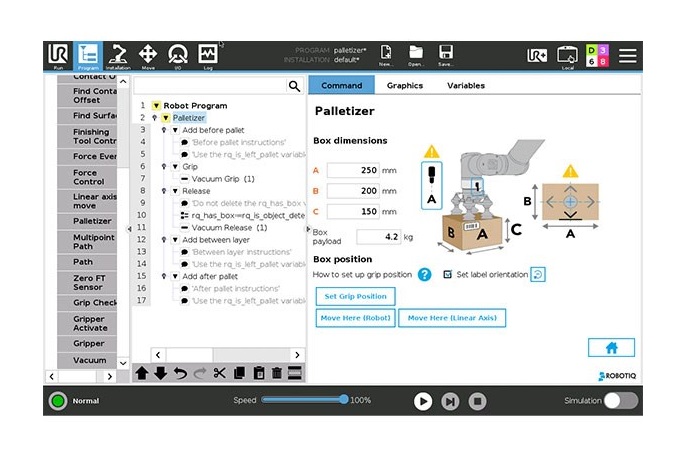 Figure 1. Adding software into the mix of hardware solutions has eased the programming burden for palletizing systems. Image used courtesy of UR

Plug and play solutions that only include a portion of the process are still not sufficient. Image buying a vehicle advertised as ‘ready to drive’ only to find that the software in the computer was missing, only the hardware was present. Same with plug and play systems, they must include all necessary components.

Universal Robots has designed an example of this hardware and software combination in their UR+ ecosystem’s ActiNav Bin Picking solution. In this case, the hardware includes both the EoAT for the robot as well as the 3D camera for identifying the product location within the bin.

The addition of the software into the robot’s programming interface truly gives this system a plug and play capability. From the moment of setup, initial calibration can be performed and the teaching can begin.

All systems, even those designed by end users, are ultimately able to be set up and configured, so what sets some systems apart from others? Simply the speed and ease with which the systems can be programmed. Since there is no defining standard, you cannot simply place all robot attachments into one of two categories such as ‘difficult’ or ‘easy’ to use, but rather to consider whether it can be bolted to the floor or table, powered on, and then programmed by a novice with relative ease. This is the target at which many manufacturers are aiming. 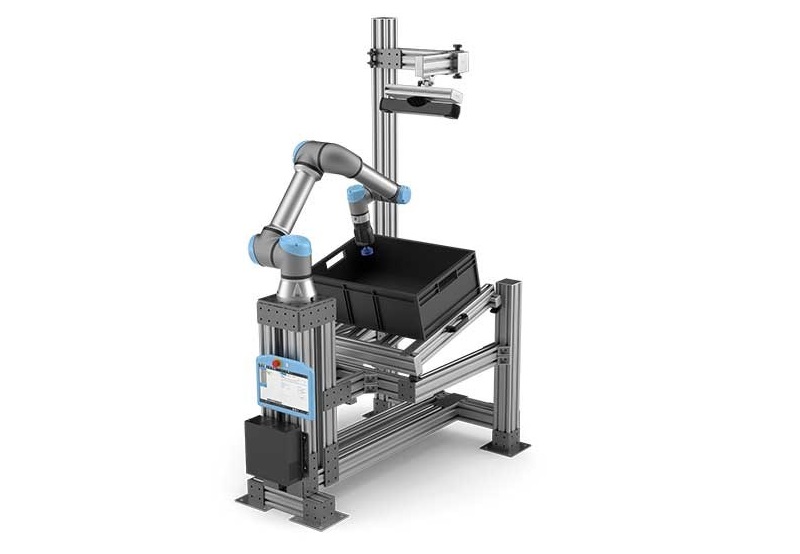 Alliora, a French company, has recently integrated Robotiq’s palletizing solution into their plant processes. They are hoping to see a return on investment in 18 months. Alliora makes boxes for clients’ products ranging from champagne bottles to board games. They have relied on temporary workers in the past for seasonal increases in production. Temporary labor is expensive so they decided to investigate Robotiq’s solutions in order to reduce production costs. They are also hoping the system reduces costs in the long term by preventing work-related injuries.

Their process first involves making the boxes, and then either filling them with the clients’ product before placing them in standard shipping boxes, or simply placing the unfilled boxes directly into the shipping box. Once the shipping boxes are loaded, they need to be placed on a pallet, which is the most critical part of the process. Workers are more hesitant to complete this labor-intensive part of the job and worker injuries are at their highest here because of the repetitive strain from the task. Alliora integrated the Robotiq palletizing solution to fix the problem. The system was installed in a short period of time and within one week was running in production. A worker with little robotic experience was able to run the system within 45 minutes of the system's integration.

The idea of plug and play solutions offers a lot of promise for manufacturers looking to integrate cobots into their factories and plant processes. Since the technology is still fairly new, the practicality of plug and play has yet to fully be established. Robotiq has managed to create some useful and interesting technology that changes the way robotic systems are integrated into the workplace. Creating programming software and accessories that are specifically designed for different common tasks has the potential to significantly reduce costs for end users. 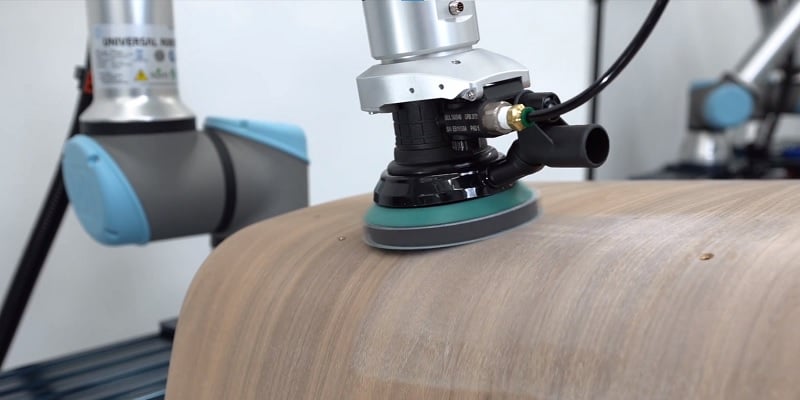 Although the idea seems sound, the actual application of the system may be more involved than advertised in some instances. For simple, easy to integrate applications, plug and play may be a good fit that will help to save time and expense. There are many tasks, however, that may require a more in depth look before being integrated. In addition to the initial design difficulty of integrating a robot into more complex tasks, comes the problem of performing ongoing improvements. Perhaps the system is easy to initially program by someone who has little to no robotic experience, but ongoing care and maintenance may be a different matter. Attention to these details should be carefully weighed (and perhaps tested with a demo robot) before making a purchasing decision.

Plug and play solutions for collaborative robots may not be as simple as just turning on and pressing ‘run’, but the goal of flexible, modular manufacturing is to get as close to this process as possible. If the robot can be set up and run quickly and easily by users with no robotic experience, that will remove many of the barriers to typical robot installation.