How Cobots are Helping With the Welder Shortage

How Cobots are Helping With the Welder Shortage

Trade positions, such as machinists, welders, sheet metal workers, plumbers, and others, are in short supply. The shortage has been anticipated for decades, but the past few years have been a perfect storm.

Between COVID-19 restrictions, supply chain issues, and so on, trade positions have been hard to fill, with much more demand than supply. Unfortunately, the trade school pipeline has been damaged by years of schools favoring college over trade schools. Ultimately, more experienced professionals leave the trades than students entering them.

Welders are in particularly short supply. The American Welding Society (AWS) and WeldingWorkforceData project that 314,000 new welders will need to enter the workforce by 2024, according to current trends.

Figure 1. Why the need? The most significant contributor to the welder shortage is attrition. Image used courtesy of WeldingWorkforceData

While growth in industry and current unfilled openings account for a piece of the welder shortage, perhaps the most disturbing trend is that welders are leaving the industry due to retirement or career advancement, and nobody is filling their roles. The AWS estimates that out of 750,000 welders, about 160,000 are close to retirement age.

Will welders be replaced by robots? Unlikely. Instead, skilled welders can partner with collaborative robots (cobots). The general idea is that the welder trains the cobot to perform dangerous or repetitive welds.

Unlike traditional welding robots, cobots can safely share space with humans. Whereas a welding robot may need to be placed in a cage or surrounded by a light curtain, cobots can assist welders in their tasks and are outfitted with intelligent sensors to keep the human safe. 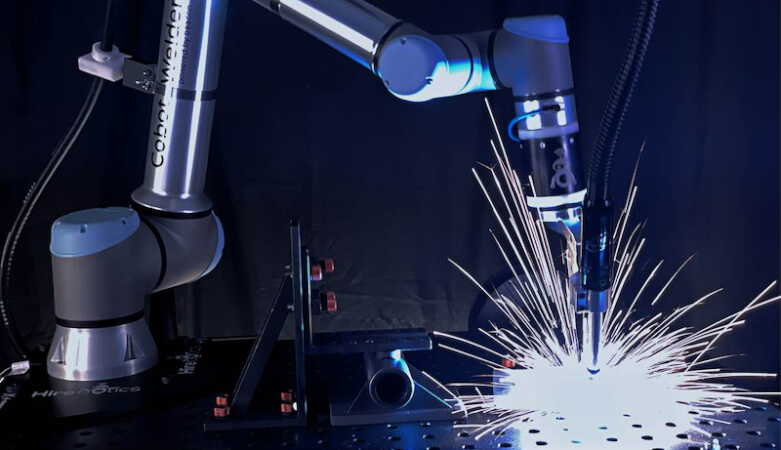 Picture a difficult, heavy assembly with multiple welds. First, the cobot may hold the pieces together to allow the welder to perform a few tack welds. Being a cobot, it can position the pieces properly, and when outfitted correctly, it is not in danger from the weld's heat.

Once the piece has been tacked together, the human and cobot can weld in unison, each completing some welds for the finished part. The completed, heavier part could be moved by the cobot and the next pieces retrieved.

Currently, cobots are trained by human welders to perform repetitive motions. Depending on the application and cobot, this training step can be achieved much easier than with existing welding robots.

Modern cobots can be programmed with machine vision instead of working through three-space and programming x,y,z coordinates for each weld. This makes robot programming more accessible to folks skilled in welding without the need for the welders to learn complex computer programming.

Hazardous welding tasks could be handed to a well-trained cobot to perform, saving life and limb. High-risk jobs, such as initial large piece assembly, pressure vessel cutting, empty fuel storage containers, and perhaps some underwater welding operations, could eventually be performed by a cobot instead of a human.

Consider a decommissioned fuel storage lot. The lot contains many large fuel storage tanks that have been “empty” for years. These tanks need to be cut into manageable pieces for loading onto trucks and recycling.

While this can be done mechanically with hydraulic shears, it is still risky for the equipment operators. There is also a set of procedures to help perform this task safely, but cobots could potentially add another layer of safety.

Welding cobots may someday be used for confined spaces or underwater welding. The Occupational Health and Safety Administration (OSHA) defines a confined space as a place that:

Figure 3. Cobots are easily used in confined spaces because they can be placed in virtually any orientation. Image used courtesy of Universal Robots

Suppose a large industrial facility has an access tunnel for plumbing water, compressed air, steam, and process gases, which must be accessible by a human, but is not meant for continuous habitation. The welder must repair a broken nitrogen pipe, which has been locked out and tagged out (LOTO).

The first question to ask is, “Where did the nitrogen go when it leaked?” Likely, the access tunnel contains nitrogen gas, which is an asphyxiation hazard to the welder. Once again, there are safety procedures, but one more layer of safety could be a companion cobot that either performs the weld or accompanies the welder, monitoring air oxygen contact, or alerting outside help should a problem occur.

The Future of Cobots in Welding

As artificial intelligence (AI) routines improve, the cobot will improve the speed and quality of welded assemblies in industry.

A cobot of the future may be able to autonomously perform pipe inspections and welds in hazardous environments without the need to put a human welder at risk. Perhaps welding cobots could be installed on pipeline inspection gauges (PIGs) to detect and repair leaks as the PIG travels through the pipeline.

Besides lifting heavy, hot pieces, and performing repetitive welds, welding cobots of the future may have built-in inspection capabilities. For example, a cobot may use embedded ultrasonic sensors to ensure that welds are clean and free of slag inclusions. Maybe they will be able to analyze the flame of oxygen-acetylene torches and optimize the flame properties for the particular situation.

Cobots have the potential to live up to the “collaborative” part of their name, being a loyal friend to the welder, rather than their replacement.