Considerations When Integrating Cobots Into a Facility

Considerations When Integrating Cobots Into a Facility

What are some steps to consider before integrating a cobot, such as Universal Robots, into a facility?

What is a Cobot?

Collaborative robots, or cobots, are a type of industrial robot designed to collaborate with human labor instead of completely replacing it. In recent years, they have gained a larger share of the automation world with their ease of use and often easier integration into plant processes.

Cobots are mostly used in applications where the process is simple, straightforward, and often high-mix, low-volume. They typically move slower than their robotic counterparts and should stop moving when they touch an object in their path due to proximity sensors. Their slower movement, combined with high collision sensitivity (i.e., total operation stop), helps prevent injury.

Industrial robots are designed to work in fenced areas with little to no chance of touching an employee since their higher speeds and lower collision sensitivity would likely result in injury or death. Conversely, cobots usually do not have a protective cage around their workspace. They are generally considered safe around workers but be sure to explore appropriate safety requirements.

Since cobots are expected to reduce labor for workers instead of replacing them, programming times can be reduced. Workers can take the more complicated tasks while the robot does repetitive work or heavy lifting.

Cobots are programmed differently from industrial robots, which usually require a dedicated robotics programmer, engineer, or someone trained specifically in robotic programming languages and best practices. Contrarily, cobots are programmed using broad movements and can often be successfully programmed without much help from the controller.

“You don't have to be a robot programmer or a robot engineer or an automation engineer to set up the cobot and get it to work,” Joe Campbell, Senior Manager, Strategic Marketing and Applications Development at Universal Robots, said to Control Automation editors during an interview. 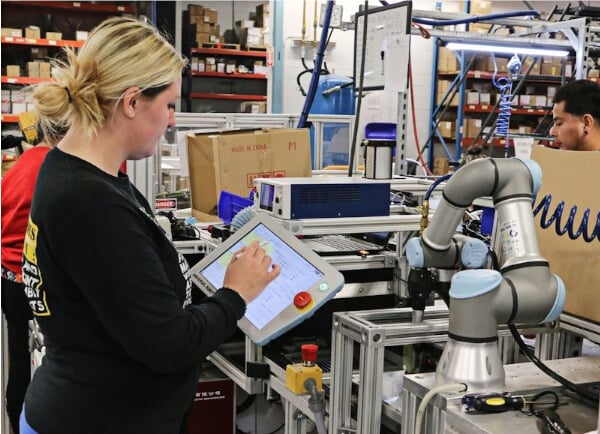 Programming a cobot can be as simple as manually moving the arm through different points the operator wants on the desired path. During this routine, the cobot must be placed into a programming mode where the robot is easily moved by hand.

Another example of easy-to-program cobot systems involves a palletizing cobot. The operator can program different pallets and processes by following a few straightforward steps. First, they define a “box” around the pallet to get its size, then the pallet pattern, followed by the load. After defining all the different parameters, the operator is asked to program one point, and the new routine is completed.

Cobots can be added to various manufacturing and plant processes. Not all processes are created equal, however, and exact application should be considered before adding a cobot.

Cobots offer a unique advantage to manufacturers looking to fill labor gaps. Incorporating a cobot can help current employees produce more without additional labor force or payroll. They can be cheaper to implement than industrial robots, often at half to one-third the cost of a traditional robotic system. Significant savings can be made from the reduction in professional programming and safety equipment in comparison to industrial robotics.

According to Campbell, the labor shortage is “not going away” any time soon.

Figure 2. A cobot working in a warehouse. Image used courtesy of Universal Robots

Cobots may offer a quick turnaround on the installation process. Infrastructure and downtime interruptions can be reduced to as little as three or four weeks, whereas traditional robotic systems take anywhere from 12–16 weeks from start to final installation. “Some of our partners actually make a commitment that they will have the cobot in production four hours after it's delivered to the factory,” says Campbell.

Since cobots are generally easier to integrate into production processes, they have a broad range of industries. Traditionally, smaller companies would shy away from robotics because of industrial robots' high initial cost and difficulty to change once implemented. With cobots, SMEs (small and medium-sized enterprises) can utilize robotics with faster integration and cheaper investment.

Additionally, cobots don’t necessarily need to operate in their original configuration for the entirety of their useful lifespan. Some manufacturers have cobots on carts that employees can easily move between workstations to provide useful labor wherever it is needed. Campbell explains, “the utilization rate for the cobot is very high, and the investment threshold is much lower because of the flexibility.”

Welding is another useful application for cobots. There is a current shortage of qualified welders in the United States. Per Campbell, there are “somewhere between 75 and 85,000 open welding jobs today. That’s projected to do nothing but grow for the next 10 years.” 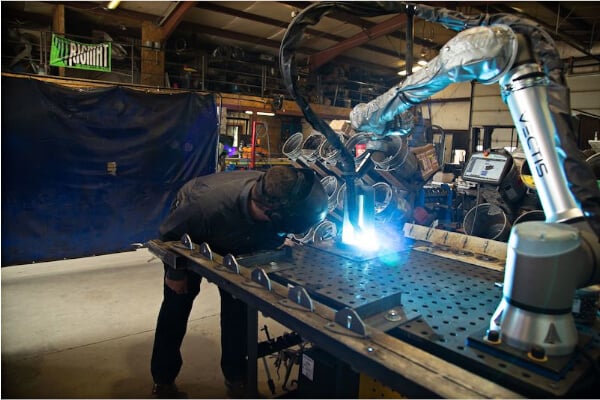 Cobots are being used in many cases to help alleviate the welder shortage. They are useful in applications where repetitive welds are common, often small welds on little parts. These welds can be tedious, so a cobot can free up workers’ time to complete more difficult welds. This setup can be beneficial because it allows human labor to be put into more difficult welds where a higher margin is returned on their labor.

The Future of Cobots

Cobots offer a different approach to automation than traditional industrial robotics. They are designed to be used as a labor-saving system instead of a labor replacement system. Campbell stresses that he’s never “seen or heard of a lost job due to automation in decades. It’s just not the case. Either robots are automating jobs that humans can’t do or won’t take.”

This creates a unique advantage in certain applications, where the robot takes repetitive tasks under the supervision of a factory worker. They can also help customers who are priced out of industrial robotics. Cobots have a lower initial investment cost, and their total cost is often cheaper because they do not require as much safety infrastructure and have reduced programming costs.

When manufacturers look into adopting cobots in their processes, they have to shift their idea from robots being “dangerous” to cobots being collaborative. Cobots have several safety protocols and can operate in environments that traditional robotics cannot. They work well in slower repetitive tasks and even have the ability to operate on a mobile platform. Labor shortages in manufacturing have helped the cobot become more of a key player in the manufacturing industry, reaching into everything from smaller operations to large corporations like Ford and other big manufacturers.

Where do you see cobots going in the future?