Robotiq is one of the latest robotics companies to release a component to eliminate labor intensive tasks. Their latest screwdriving solution is one of many that engineers can utilize on the factory floor.

The industrial sector has been using robots for quite some time now. The concept of using an industrial robot in an assembly line or on the floor in an automotive manufacturing facility is not new by any means.

Robots are Getting Tougher

In 2020, OnRobot launched a programmable screwdriver component that engineers could attach to their robot and program to do the screwdriving tasks for them.

Automated screwdriving systems can come in handy for control engineers when they need to tighten the torque on a motor, adjust DIN rail placement, or adjust a control cabinet. These tasks can cause a lot of strain on engineers when they have to do this multiple times a day. That’s where these labor-intensive robots are coming in.

ATI Industrial Automation also recently debuted an orbital sander for robots. If you’ve ever had to sand anything by hand, you know how intensive and tiring the process can be. Attaching a sander tool to a robotic arm and perform sanding tasks can make it more consistent and free of human error.

Boston Dynamics just celebrated the first anniversary of their quadruped robot, designed to venture into hazardous environments such as mines and explosive facilities. These tasks were previously only done by humans who would risk their lives to do their jobs.

Companies are continuing to advance the technology involved with automated labor-intensive robots, and industry leaders refuse to be left behind. Robotiq is the latest industrial robotic company to release its new screwdriving solution for industrial applications.

Robotiq is based on the idea of freeing human hands from repetitive tasks in the workforce. Since it was founded in 2008, Robotiq has created collaborative robots to be more accessible to companies. 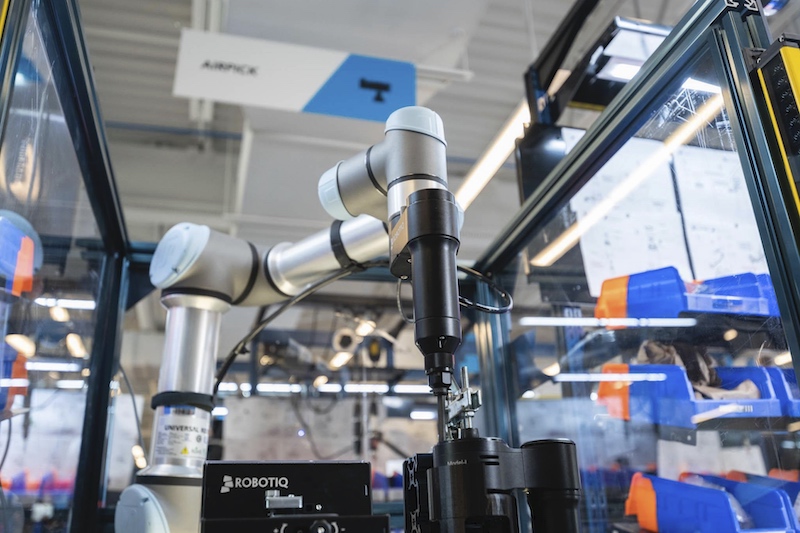 Robotiq is not looking to recreate the human hand but to make robotics that are capable of completing repetitive tasks traditionally too difficult for robotics.

Their new screwdriving solution hopes to replace manual labor with robotics in many different operations involving screw assembly. Screw assembly can be expensive to automate. Especially when manufacturers receive batch orders or are often changing their products. When they change products, the screws can change too. Hard robotic systems can be costly and slow to adapt to continuous product change.

In addition to this component working with soft robotics, Robotiq promises easier programming abilities. Normally, making different components talk to each other is a complex task for end-users because of the wide variety of programming techniques used today. Robotiq’s screwdriver is controlled from the teach pendant and can be changed to match daily requirements. The system can adapt to different fasteners, and users can change the tips in roughly one minute.

It is designed to handle quick changes between product lines. This adaptability can be useful in small-batch manufacturing and for companies that change product lines often. Users can change the screw tips quickly, which can also facilitate fast product line changes. 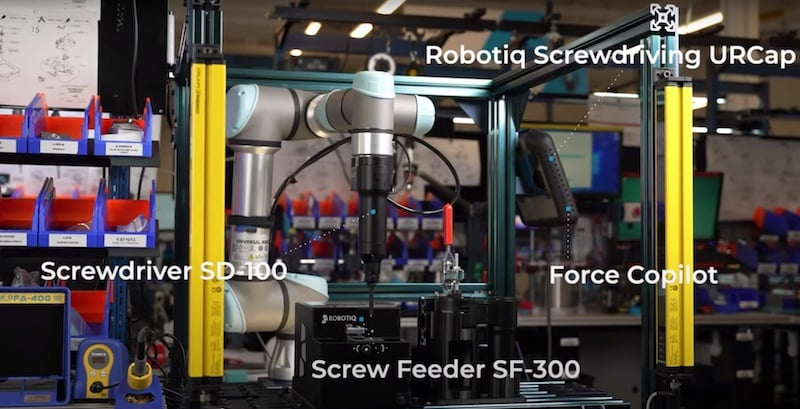 A diagram showing where the components of this robotic screwdriver solution are and how they work with a robot. Screenshot used courtesy of Robotiq

“While it’s fairly easy to fasten small screws manually, it’s much harder to automate. We’ve managed to simplify that process for the end user. After a pandemic year and the resulting changes, this is the perfect time to introduce a solution that will help factories automate better and faster, elevate their workforces, and free human hands from repetitive tasks,” explained Jean-Philippe Jobin, CTO, and co-founder at Robotiq.

Robotiq is just one of many companies to release labor-intensive robot components. Robots are getting tougher by design, and engineers continue to develop the skills needed to use these components in harsh environments.