Boston Dynamics Recognizes One Year of Spot, the Quadruped Robot

Boston Dynamics Recognizes One Year of Spot, the Quadruped Robot

It’s been a year since Boston Dynamics debuted their latest quadruped robot. Where has the industry seen the adoption of Spot in the last year?

Boston Dynamics is a robotic company you may have heard of before. They're not brand new to the industrial robot space and have been around for nearly 30 years. When most people think of Spot, the name is often associated with Boston Dynamics.

Last week, Hyundai Motor Group completed the acquisition of Boston Dynamics from Softbank. While Spot now belongs to a new parent company, the robot may continue to find its way into more areas of manufacturing and automation.

The Origin of Spot

The concept of Spot is not new. Boston Dynamics worked on the design of Spot for years before it was officially available to the public. About a year ago, Spot graduated from the company's early adopter program and was officially cleared for commercial sale.

Traditionally, industrial robots are designed with large arms and grippers. They can often look bulky and quite different from quadruped robots.

Quadruped robots are designed to represent dogs and other animals for several reasons. According to Boston Dynamics website, Spot's agility, balance, and dynamic movement were characteristics previously only seen on animals. They designed Spot to move like an animal while also being able to withstand environments that animals and humans cannot.

Since its release to the public, Spot has been used in many industrial, residential, and commercial spaces.

A Year of Spot

There is a lot of advanced technology that allows automated components to perform dangerous tasks. Over the last year, Spot has helped automate tasks in these sectors, to name a few:

A copper and silver mine in Northern Canada called Kidd Creek Mine also used Spot to help control mining operations.

Spot being used in the Kidd Creek Mine to control specific mining operations. Image used courtesy of Boston Dynamics

Operators at the mine mentioned the quadruped was particularly useful for maneuvering and navigating through the loose terrain underground. They were able to get the inspection information they needed while keeping their employees out of harm's way.

In addition to its inspection capabilities, Spot has automated data collection features and remote access capabilities that allow the quadruped robot to be controlled from anywhere.

Users can control and track Spot with a controller that is API friendly. The robot controller can also be used to create autonomous missions through the Autowalk feature that creates routes for Spot to follow. Many have found this tool to be helpful in critical operations, such as utilities and hazardous industrial environments.

Where Will Spot Go Next?

Since it was first made available for commercial sale, Boston Dynamics has updated some of its autonomous capabilities to include new features. Some of these features include remote access software and a new robot arm to enhance autonomous site inspection. 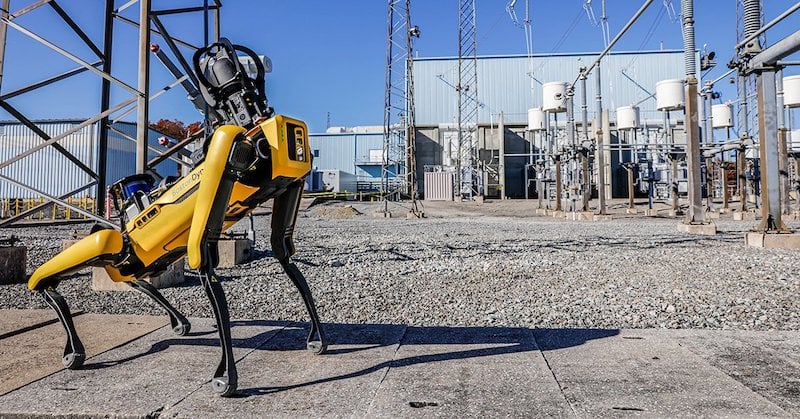 Additionally, Boston Dynamics launched a web-based software by the name of Scout. Scout allows operators and engineers to control their fleet of robots remotely from a virtual control room. Boston Dynamics is pushing for Spot to integrate into even more areas of the industry.

Do you think Spot will ever be used in your facility?