Quadrupeds: The New Buzz In Robotics

Quadrupeds: The New Buzz In Robotics

This article talks about the quadruped technology, the common commercial quadruped platforms, and their industrial applications. The word quadrupeds refers to quadruped robots in this article unless specified otherwise.

Robots with industrial applications have traditionally been either manipulators or wheeled mobile robots. However, in the past couple of decades, self-driving cars and bioinspired robots have led the robotics revolution. While the self-driving vehicle technology is still far from reality, biologically inspired robots have made their way into industries.

What Are Bio-Inspired Robots?

Biologically inspired robot system designs have solved a lot of limitations of the traditional robots. These robots are designed to mimic the locomotion capabilities of real-life creatures or their agility and maneuverability. Thus, while they are difficult to build, they come with a lot of promising solutions and open a plethora of opportunities for robot deployment.

Boston Dynamics’ Atlas, and U.S. Army’s Petman are the most famous full-sized humanoids, human look-alike robots. Cassie is a lower-body bipedal robot with great balance and Sophia is an upper-body humanoid with AI conversational skills and human expressions. Pepper, Nao, and Asimo are other bioinspired smaller humanoids developed for social engagements. While these robots look great and can do amazing tricks, their commercial applicability is highly questionable for the foreseeable future until they become robust or affordable enough.

Quadrupeds, four-legged robots mimicking dogs/cows/cat, stand out among all the other bioinspired robots mentioned above because their design involves less sophistication and challenges and they have more industrial applications (meaning more commercial feasibility).

What Is Special About Quadruped Robots?

Quadrupeds have comparable agility and dexterity to full-sized humanoids with lesser technological challenges - primarily because their locomotion strategy can use 4 legs instead of two for bipeds. This makes the dynamic balancing, maneuverability aspects, and control algorithms much easier to solve than others. Today’s quadruped robots can climb stairs, uneven terrain, jump and hop and carry payloads, autonomously or via teleoperation without as severe battery/power limitations in aerial robots or humanoids.

With four legs, they can be more stable on rough or unprecedented terrain during autonomous operation. Quadrupeds usually have 12 degrees of freedom (actively powered joints revolute joints) - three in each leg, one at the knee, and two at the hip.

The kinematics and dynamics of a quadruped are easier to solve and mounting manipulators, inspection gear, or any custom robot system on top of the quadrupeds opens a whole new world of possibilities. They find use in industrial environments which means a market does exist for them despite the extreme costs. All these advantages make quadrupeds the most successful bioinspired robots.

How Do Quadruped Robots Work?

Quadrupeds have robust locomotion owing to the seamless integration of perception, cognition, and controls software modules with the sensors and actuation hardware. Quadruped joints are usually powered by electric actuators (like servo motors) or hydraulic actuators. These actuators have high-torque capabilities to support the robot weight and payload while also having very quick response systems for dynamic gait abilities.

The complex quadruped system needs to manage stability and derive kinematically feasible actions when motion instructions come through. When it needs to move forward, it converts the Cartesian distance into joint instructions (using inverse kinematics) for the 12 actuators while ensuring the stability of the system.

Motion stability means the ability of the robot to maintain a pose without having to move its body around to adjust the weight/forces. Quadrupeds can have either statically stable gait or dynamically stable gait.

Statically stable gait means the robot if paused at any point of time in motion can stay there without unbalancing and will not fall. The technique for statically stable gait is creeping, which is walking by having three feet touching the ground at all times such that the center of gravity of the robot lies within the convex hull of the three feet touching the ground. This is a very slow gait and thus not very useful in real-life applications.

Statically Stable Gait (red leg is lifted in the air).

Dynamically stable quadruped gait (Black legs on the ground and Redlegs in the air). 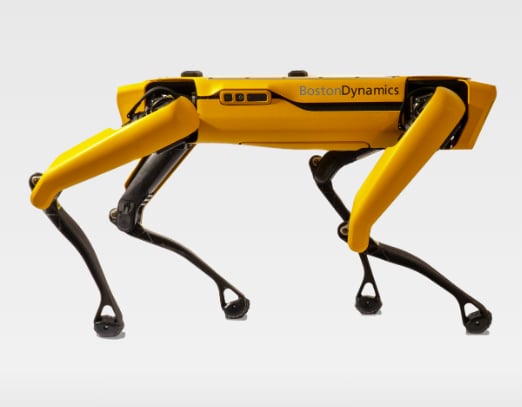 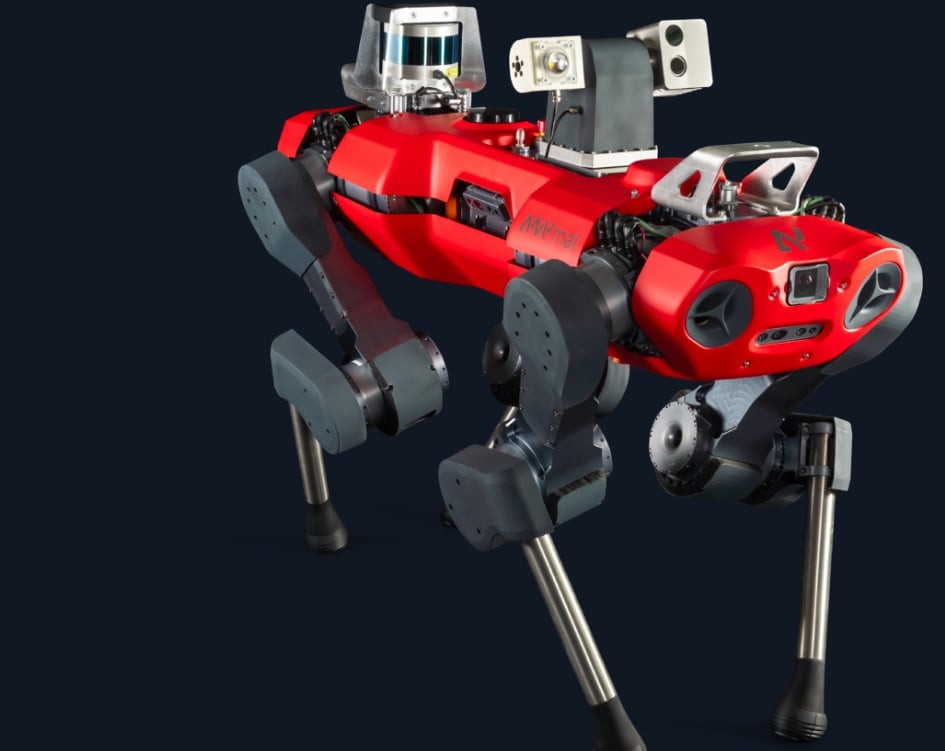 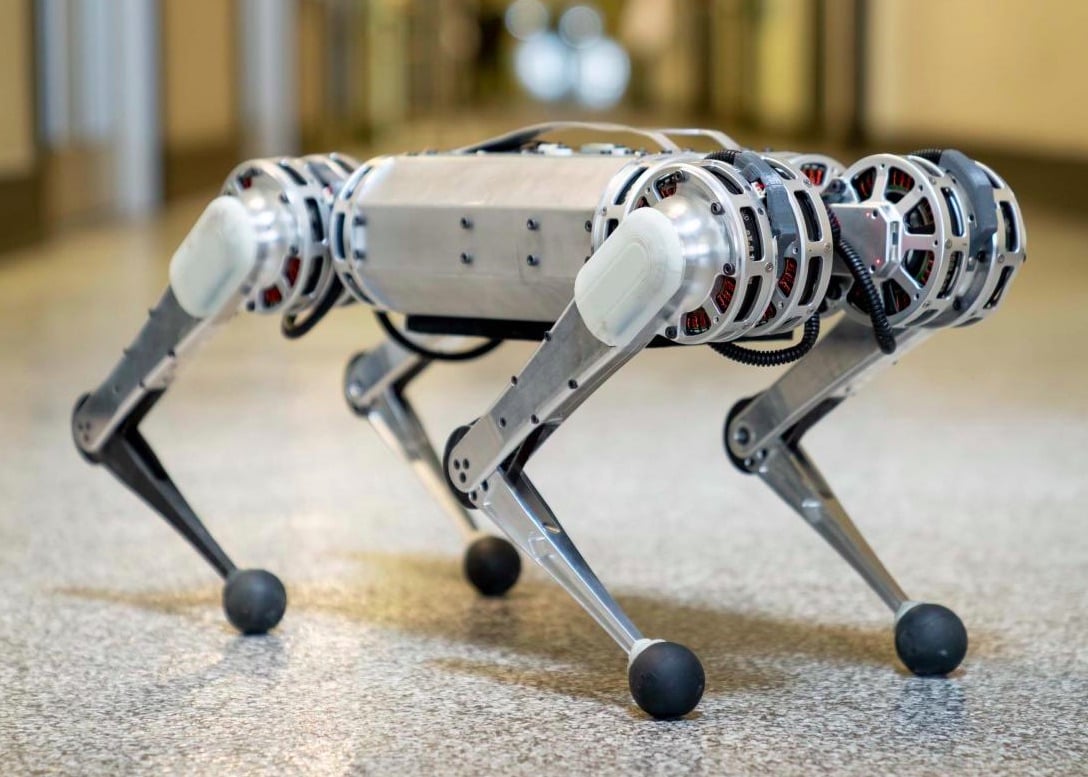 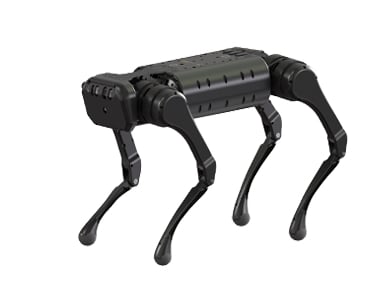 The A1 quadruped. Image used courtesy of Unitree Robotics.

Among these, the Spot is the most popular but the AnyMal too has amazing features. A comparative description of their features is listed in the table below.

While this list of comparisons is very exhaustive, the most important aspects of the Spot and ANYmal robots is their ability to navigate autonomously using vision sensors. They demonstrate the most appreciable stability to the naked eye.

Due to their ability to traverse all difficult areas, a quadruped is ideal for all human inaccessible, hazardous, or remote areas. They can be used for indoor navigation in places with complex construction as well. The construction industry, electric power substations, and oil and gas industries are the most common domains for their deployment.

Largely, all quadrupeds are used as research and development platforms for continuous technological advancements. MIT’ Cheetah is a pure research platform developed for R&D into bioinspired robotics and Ghost Robotics’ Spirit also belongs in the same group. 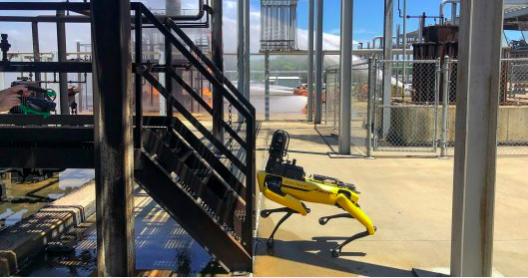 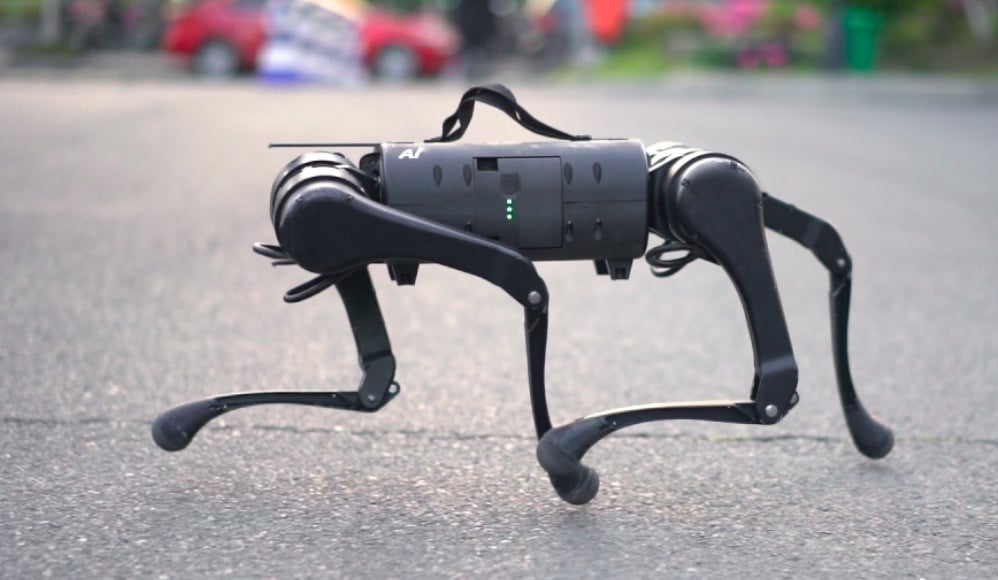 Owing to the ability to navigate stairs, uneven terrain, and handle unprecedented human/object intervention, the Spot and ANYmal robots have been deployed for visual inspection on construction sites as well as oil and gas plant monitoring. The Spot robot also appeared in the Super Bowl 2020 commercial, deployed on an electric substation site for visual inspection. Public safety, health industry help, and entertainment industry are other secondary areas where Spot has found use cases.

The quadruped robots have garnered a lot of well-deserved attention and are novel robot designs. However, the price and limited application space make their commercial viability a little difficult, but very promising.

Companies have been exploring using robot arms, LiDARs, payload boxes, and other add-on enhancements to these robots to further justify their existence and commercial viability, attempting to make them a lot more than just fun to watch and appreciable robots.