Robots are no longer unanimously just "robots"—there are specific tasks and functionality of each kind. Learn about the technology differences between fixed-location robots and mobile robots and why no one robot is like another.

The robotics industry has changed a significant amount over the recent decades, and robots have become more specialized over time. With this specialization, new definitions for different robots can help us understand the specific tasks and functionality of each type of robot.

While there are many ways to categorize robots, it is easy to highlight the fundamental differences between mobile and non-mobile robotic systems. Both types of robot are designed to assist in the operation of many different manufacturing and logistics processes, but the way they complete their tasks are fundamentally different.

From their speed, to programming, to safety, mobile robots often operate much differently than their stationary and/or articulating arm counterparts. All of this must be kept in mind when looking to integrate a robot into an automation process.

It can be beneficial to understand the basic nature of each type of robot before making an investment into such expensive equipment. With the understanding that a robot is not necessarily just a robot, time and money can be saved by understanding the basic behaviors of different systems, whether they are stationary or mobile.

Fixed-location robots can be defined as articulated arm robots that perform stationary tasks. These robots are the backbone of many industrial processes and have not changed a tremendous amount in the time that they have been used in manufacturing and logistics.

This larger branch of robots can be further dissected into four main types of fixed-location robots. These include:

Each of these has their own specialty and do some tasks better than others—there is not necessarily a one size fits all application for any of them. These robots all operate according to 3D space that requires an internal computer to compute the location of the arm tooling based on the positioning of each joint on the arm. Their operation is often rigid and they operate well in environments where repetition is fundamental to the process.

Articulated arm robots are the cold, industrial robots we often think of when picturing car manufacturing or robotic welding. These robots generally operate with four or six axes, depending on the type of task they are to be used for.

Four-axis robotic arms are usually used in palletizing applications where the product can remain level. The End of Arm Tool (EoAT) of a four-axis robot must remain parallel to the base because of the design of the robot.

Six-axis robots are better suited for welding, pick and place, and other more complicated tasks. The EoAT of a six-axis robot can move into almost any position or angle.

Though six-axis robots are generally more expensive than four-axis robots because they have more servo motors and are more difficult to build and operate, they offer greater functionality. 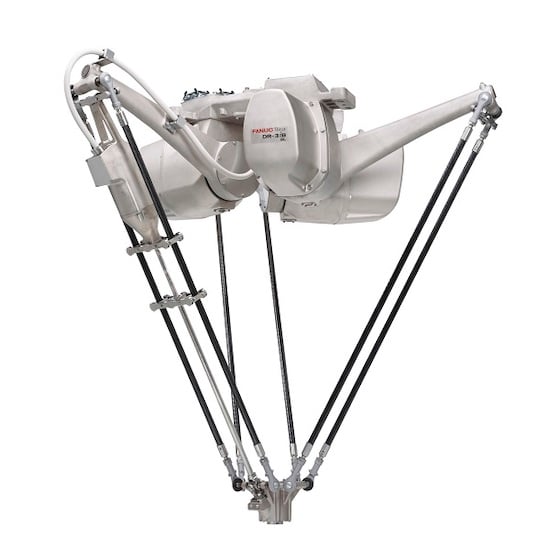 Delta robots are a type of four-axis robot where the EoAT remains level; they can also be called a parallel robot, or even spider robot.

Delta robots work by independently moving three separate legs with servo motors; the movement of these legs causes the tooling to move around and can be used to lift it up and down. They have the potential to be very fast and are often smaller and less expensive than robotic arms.

These speedy robots are well suited for applications that use pick-and-place movements, such as in the electronics industry for making circuit boards and the pharmaceutical industry for the fast sortation of products. 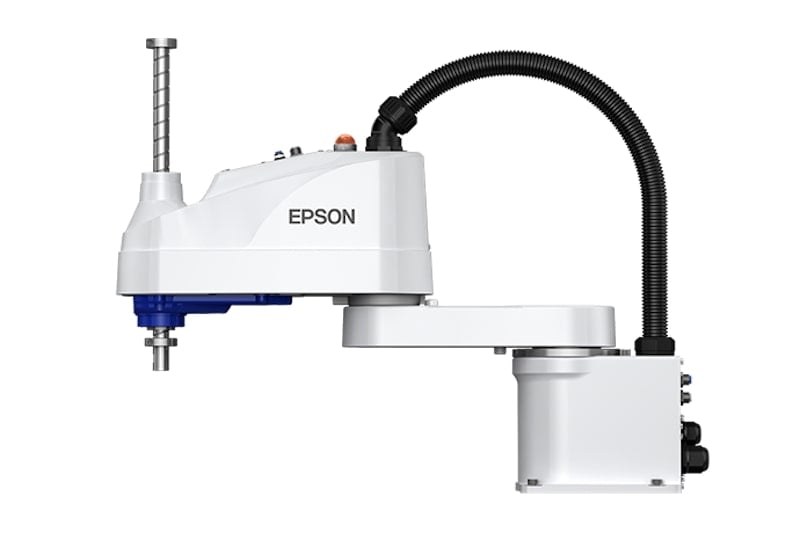 SCARA stands for Selective Compliance Articulated Robot Arm. These robots are four-axis robots and are used in many different assembly applications. They are useful for applications where speed and accuracy in the vertical dimension is important.

SCARAS work well for assembly applications that require precision, such as inserting a round peg into a hole. Since they are four axes, the robot is able to insert the peg without binding in the hole. 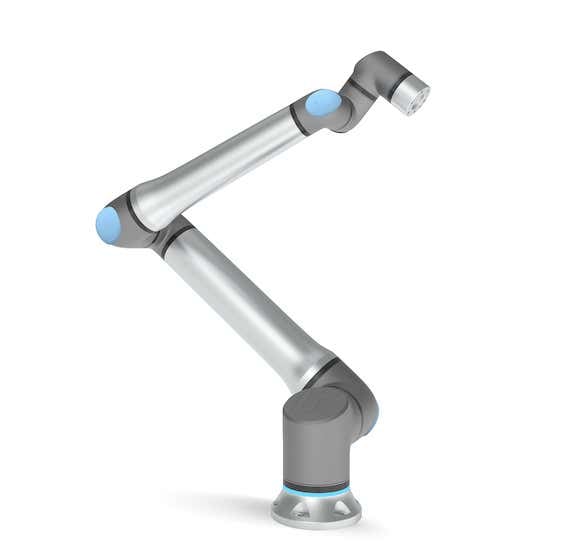 Collaborative robots, or cobots, are quite different from the other robotic arms mentioned. By design, cobots are intended to work alongside humans. For this reason, they are often much slower and function in different ways than other articulating arm robots.

The general idea behind cobots is to have a human worker use their brain while a cobot helps with heavy lifting or repetitive tasks. This works well in many applications where tedium and repetition can cause work related injuries over time.

Cobots can also be useful in certain welding applications where an operator quickly programs points for the cobot to weld along. This robot human duo often leads to increased production times and less worker fatigue. 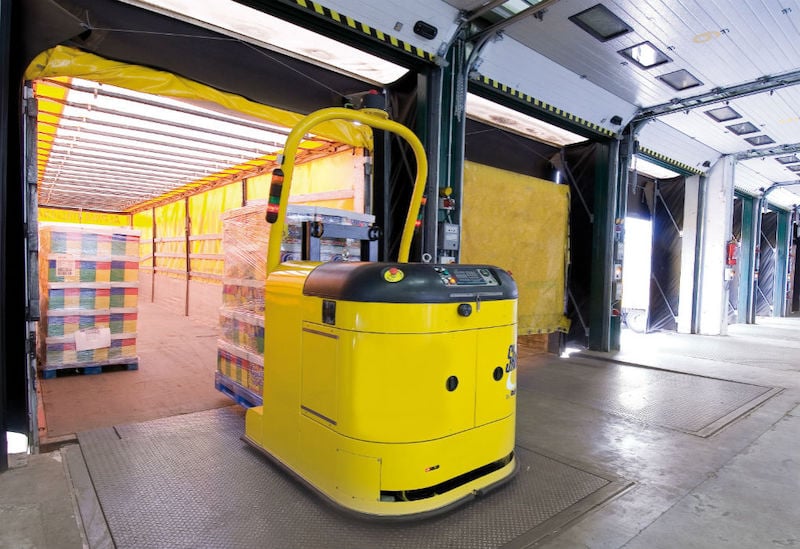 Mobile robots use different technologies, such as lasers or cloud computing, to move around. Image used courtesy of Skilled Group

Different types of mobile robots have become very useful in the workplace. Sometimes they work alongside fixed-location robots, and other times, they operate completely on their own.

These robots form their own category of automation and can be subcategorized into different types of mobile robots including:

These robots operate according to a different set of parameters and are often reliant on mapping and cloud computing for moving safely around their environment.

Mobile robots are less likely to use Cartesian space to perform their movements and usually rely on advanced sensors to relay information to cloud computing technology. This translates into a system that senses changes in its environment and adapts to each situation appropriately for safety and logistical reasons. 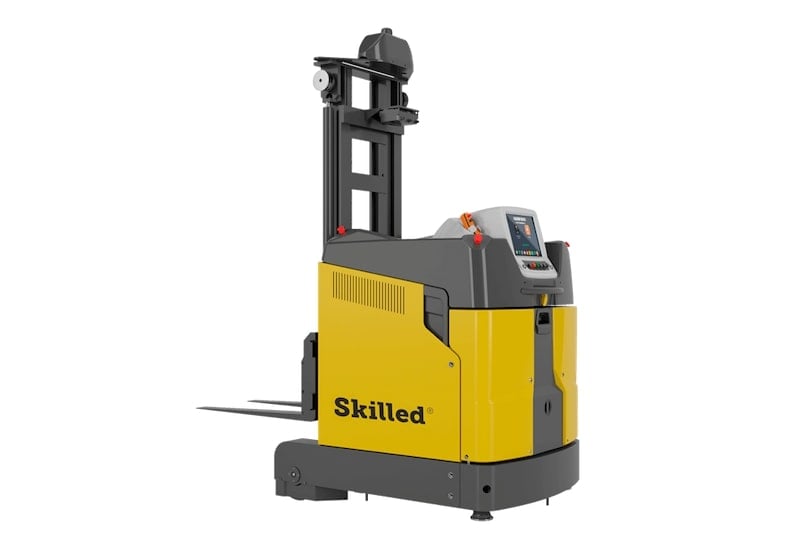 AGVs can be categorized as any type of logistical autonomous robot. These systems are often used to transport products or goods around industrial plants or warehouses without human guidance to help save on labor costs.

AGVs, as indicated by the inclusion of ‘guided’ in their name, can use a system of rails, tape, wire, or even visual cues (barcodes or QR codes) attached to checkpoints to follow along their paths. They are increasingly using AI or cloud computing to operate more efficiently and to reduce the amount of infrastructure changes for integration. These robots work well in situations where palletized products need to be moved around the plant in a structured way. 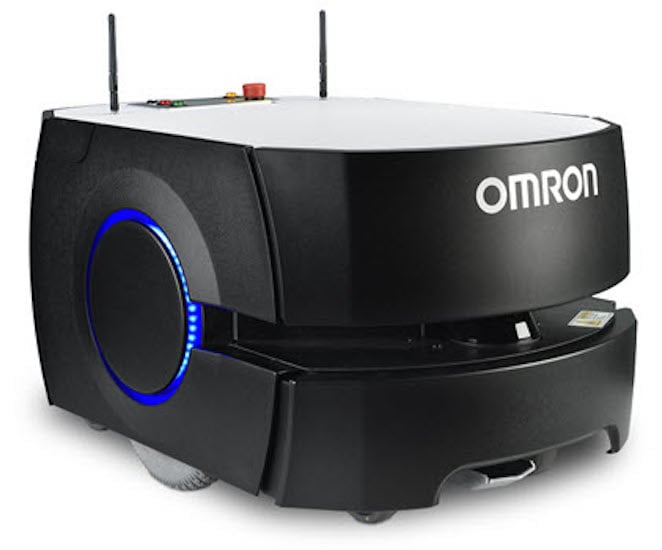 AMRs are very similar to AGVs, but they usually perform more advanced tasks with less specific guidance restriction, more free to move independently around a space while avoiding obstacles. They have changed from simple machines to advanced robotics capable of navigating complex environments over time.

Like AGVs, AMRs often use cloud computing and AI to navigate their environment and can use location data to interact with other AMRs on the plant floor to prevent traffic jams and inefficient movements.

Their use has helped to improve logistical processes in warehouses for many shipping companies, including Amazon. Storage and retrieval is a specialty for AMRs, and they can be used to retrieve stored items or to store items in storage facilities. 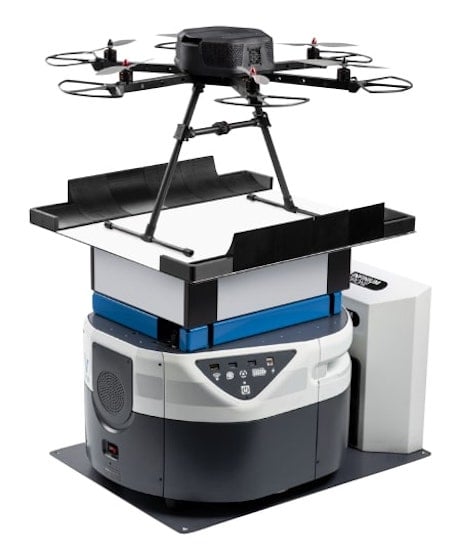 Drones, usually the bladed quad-copters used to obtain photo and video footage for many industries and hobbies, may fit into several guidance categories. They can be remotely controlled, or they can navigate between checkpoints using pre-programmed waypoint paths.

With advanced sensing capabilities, they may also be used to scan large geographical areas while choosing more independent paths and avoiding obstacles until returning to the launch point.

More Than a Robot

There are many differences between fixed robotic systems and mobile robotic systems.  Fixed robots are generally used for repetitive tasks where accuracy and speed are important. They are often the workhorses of many manufacturing plants.

Mobile robots, however, rely more on AI and cloud computing. These robots are generally used for logistical processes to help make warehouse distribution faster and more efficient. Mobile robots are also useful for reaching places that are dangerous or inaccessible to human workers.

Advancements in all fields of technology continue to pave the way for robotic innovations. Who knows what new types of robots will appear in the next 5 or 10 years?