The Evolution of Autonomous Mobile Robots

The Evolution of Autonomous Mobile Robots

What are autonomous mobile robots and how did they come to be a crucial part of the industrial manufacturing industry?

Why are Autonomous Mobile Robots Important?

Autonomous mobile robots (AMRs) have changed the way manufacturers and warehouses operate. They are often the backbone of cheap drop shipping industries and function around the clock to help warehouses and manufacturers get their products to customers. Online giants like Amazon would have difficulty keeping up with demand if it weren't for these robots.

They help eliminate repetitive mundane tasks from workers, allowing them to work at stations more conducive to workers' health and productivity.

Traditional manufacturing robots are fixed in place or operate on a fixed track. They are unable to make independent decisions on how to perform the tasks they are assigned to do. An autonomous robot can make decisions on its own based on a set of parameters it takes from its environment. This feature greatly increases the amount of flexibility in assigned robotic tasks.

When using autonomous technology in conjunction with a mobile robot platform, the robot can complete a higher number of tasks than previously thought. Machine learning and environmental awareness open smart robots' possibility to perform tasks previously unimaginable with regular robotics.

However surprising it may seem, autonomous mobile robots are nothing new. They have been around for quite some time as prototypes and instruments for research and study. We have only started seeing them more frequently because of the drop in manufacturing and technology costs to produce these robotics types.

William Grey Walter developed the first AMR in the late 1940s and early 1950s. He made two successful prototypes, Elmer and Elsie. The robots were used in his research for neurophysiology advancement. They included a light sensor and a bump sensor with a vacuum tube to simulate two connected neurons.

Later editions of his robots included a sound sensor. These robots were able to move around their environment and learn about their surroundings. They were even able to find a charging station after exploration.

While these first autonomous robots were somewhat crude compared to today's AI-driven robots, they started the foundation that scientists and engineers have built upon for the last 70 years.

In industry, most of the advances in autonomous systems consisted of autonomous guided vehicles (AGVs). These vehicles are still in wide use today and consist of a vehicle with some control system to allow for driverless operation. The first types of these vehicles were invented and put to use in the 1950s. They were simply carts to move product from place to place, in warehouse and manufacturing applications, without a driver's need.

Most of them used very rudimentary control systems consisting of a wire embedded in the flooring with a current running through it to produce a magnetic field. The AGV was equipped with a sensor capable of following the magnetic field created by the wire. These types of automated vehicles are still in use today, where more complex systems are not necessary.

After introducing AMRs created by William Grey Walter, most autonomous robotics' advances were in testing and laboratory experiments. It wasn't until the early 1990's that a commercially viable AMR became available. It was called the HelpMate. 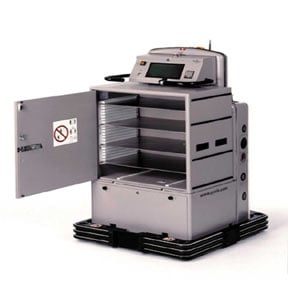 The HelpMates primary function was to move different things around the hospital, including meal trays, mail, sterile supplies, reports, and lab results.

It could interact with its environment based on information from sonar, infrared, and vision systems. To help improve versatility, HelpMate was even capable of using elevators and corridors to move between buildings. The safety of the system included estops, turn signals, and collision detect. With the HelpMate system's introduction, Autonomous robotics became a viable option to help workloads for employees. It proved to be a cost-effective way of eliminating menial tasks for increased labor costs.

Autonomous Mobile Robots have changed dramatically in the last 30 years. HelpMate and other AMRs helped clear the path that led to the more sophisticated AMRs in industrial and business use today. Modern AMRs are capable of performing many different tasks and help keep costs down in many other sectors of the economy.

They can work long hours and weekends, helping to reduce the load on workers during peak production without the burden of hiring more workers for factories and warehouses.

Traditional stationary robots have been in the industrial sector much longer than AMRs. Still, with recent technological advances in machine learning and AI, AMRs have started to become a much more critical part of the industrial toolbox. 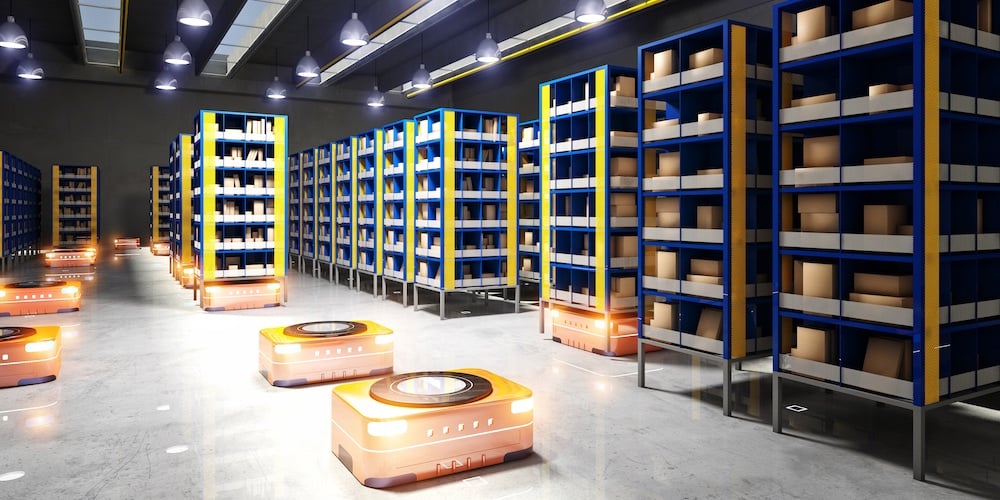 Companies like inVia and Locus are transforming the way that warehouses and dropshipping work. Locus uses a multi-bot picking system capable of boosting warehouse production by 2-3 times average production.

The Locus bots are fully autonomous and move around the warehouse based on the most efficient path. Workers interact with individual robots and pick items from the shelves to put onto the bots containers. After the item is scanned and placed on the robot, the robot tells the worker where the next closest pick is.

The next pick isn't necessarily from the same robot, and the worker takes the shortest path to the next pick, and the process continues. Each robot continuously updates whenever orders are placed and changes its movement plan whenever a more efficient path crops up.

Only time will tell where AMRs will be useful from this point forward, but they aren't going anywhere, anytime soon. The use of AMRs on a wide scale is much more recent than stationary robots or AGVs. Their current presence has shown a large need for their capabilities with massive drop-ship warehouses like Amazon. Since their beginning, they have come a long way and transformed into extremely efficient machines for the jobs they are tasked with.