An Overview of Automatic Guided Vehicles

An Overview of Automatic Guided Vehicles

What are Automated Guided Vehicles (AGVs) and how are they becoming more widely used within industrial manufacturing?

What are Automated Guided Vehicles?

Automated Guided Vehicles or AGVs, are a form of vehicle that moves autonomously from location to location to carry a payload, usually in the manufacturing process. They are not run by an operator when functioning under normal conditions. The method of movement can involve guide wire, electrical signal sensors, or light reading sensors. 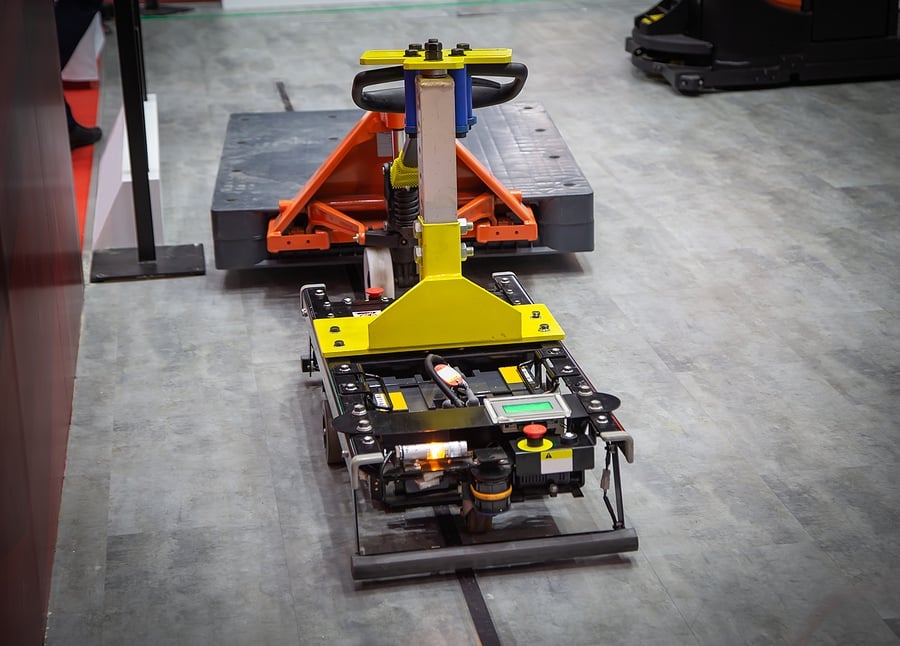 Each type of guidance system has costs and benefits, and need to be carefully analyzed before a specific system is designed to keep the AGV on course. These are used in many different industries, from medicine delivery systems in hospitals to warehouse heavy material handling.

How Do AGVs Work?

AGVs work using several different methods, but follow the same basic principle to function; the vehicle follows a path and a sensor gives feedback for the control system.

One of the most basic systems for keeping an AGV on course is to place a wire in the concrete floor that emits a radio signal for the vehicle to follow. A shallow groove is cut along the intended path in the warehouse where the vehicle is intended to operate. A wire that is capable of producing a signal for the AGV to follow is embedded in the floor. Once the path is determined a sensor on the vehicle is used to detect the signal transmitted from the wire. It is a simple system but can have the downfall of being difficult to change once a path is established since the wire is permanently mounted in the flooring.

The concept behind tape-based routing is very similar to wire-based. The robot has a sensor that follows a path made out of tape. The tape can be either colored or magnetic. Either variant has its own type of sensing system and they are not interchangeable. Tape routing has the advantage of being easily modified to create new paths, whereas wired routing is costly and difficult to change based on its permanent placement.

One disadvantage of using tape is its tendency for it to become damaged in high traffic areas where the tape wears out over time rendering it unreadable to the AVG. Once the tape has to be replaced it can lead to increased maintenance costs and lost production during that time.

Tape sensing AGVs use a sensor that detects color variations on the floor. Since the tape is a different color than the rest of the floor it is able to perceive a difference and adjusts its path accordingly. Colored tape is generally a less expensive method of path creation than others and offers the advantage of being easily adjusted to create different paths.

Magnetic tape is used in the same fashion as colored tape but uses a magnetized strip to create the path. A sensor is used to follow the tape by reading the magnetism found in the tape.

Vision guided systems utilize computer vision to interpret the surroundings of the AGV. This offers many advantages over a path based system. It creates the possibility for an unlimited number of paths, increasing efficiency and saving time between tasks. A vision-guided system requires no changes to the plant infrastructure. It records the features in its environment and uses that information to interpret its surroundings. Although the vision system is more complex it helps save on some costs because no extra changes are needed for it to perform the intended task.

Laser-guided systems rely on a rotating laser to give the necessary information to the control unit on the vehicle. The laser unit sends out laser pulses in a 360-degree radius. It receives the beam back into the system and uses it to map out its surroundings. 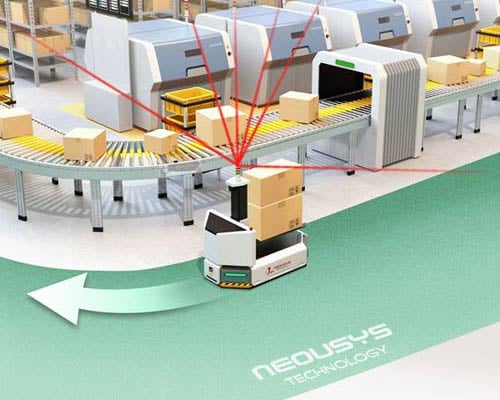 An AGV being guided by laser target guidance. Image courtesy of Neousys.

Lasers are complex but give extreme accuracy and are able to adapt to a changing environment. The ability to adapt to surroundings makes a laser-guided AGV extremely versatile. The added cost is justifiable in an environment that is constantly changing and adds to the safety of the workers around it because it can detect when workers are in its path.

They are most useful in repetitive tasks and include less complex guidance systems. Although they generally use defined paths and simple guidance systems they can utilize any of the guidance technology available when necessary. They each perform a specific function for different processes either in manufacturing or in warehouse applications.

The tasks assigned to AGV systems are continuously becoming more complex. They offer a significant amount of advantages where the repetitive movement of product is necessary. Forklift adapted Automated Guided Vehicles are extremely useful when moving pallets around from know locations. They add efficiency to the system where the repetitive movement of pallets is common. This frees up workers for other more complex tasks. Towing systems are used to move raw products and finalized products throughout the manufacturing plant depending on the application. They function similarly to other load-bearing AGVs.

The safety of the robot and workers is increased by their ability to see obstacles in their path and avoid them. Plant efficiency and productivity can be greatly increased with their use since they have improved pathfinding abilities reducing the time between pickup and dropoff of product.

AGVs have many different applications, spanning many different industries in manufacturing and warehouse applications. The different tasks assigned to them are steadily expanding and new uses and functionalities are found often. They can be used to transport raw material, pallets of product, and trailers. The medical industry uses them to transport medical supplies through hospitals in certain instances.

Automated Guided Vehicles are a great candidate in many different plant operations. They are especially suited to repetitive tasks involving the movement of the product. When product tracking is important AGVs help to keep track of products where human error may cause mistakes and lost packages. Worker safety can be increased with their use since human error is eliminated when moving heavy products. Manufacturers can benefit from reduced labor costs over time with their use. It is best to make sure the benefit of these systems outweigh the cost when looking to integrate, however, because initial installation costs can be high.