A Look Into Subsea Control Systems and Automation Technology

A Look Into Subsea Control Systems and Automation Technology

Dive into the critical functions of a subsea control system and how to utilize subsea production equipment to automate industrial processes, such as oil drilling and production.

What is a Subsea Production System?

Oil and gas fields reside beneath many offshore areas around the world. In oil and gas processes, the term subsea refers to exploring, drilling, and developing oil and gas fields in underwater locations. Underwater oil facilities are commonly referred to using a subsea prefix, such as subsea well, subsea field, subsea project, and subsea development.

Current technology allows for subsea development at a water depth of 12,000 feet. There are more than 1,300 jack-up rigs and semi-submersible platforms worldwide, in which over 170 active rigs are located near the southern coast of the United States in the Gulf of Mexico. Global offshore oil production accounts for nearly 30% of total global oil production and produces at least 28 million barrels of oil per day.

The hardware must be reliable to protect the environment and simultaneously make the production of subsea hydrocarbons economically feasible. Deploying this hardware often requires specialized vessels, which need to be equipped with diving and robotic equipment. 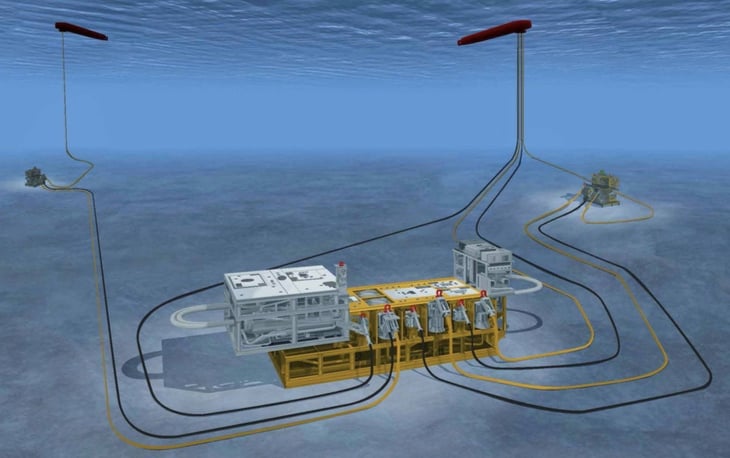 Subsea production systems can be as simple as a single satellite well with a flow line connected to a fixed platform. This can be done simply with floating production storage or as complex as installing multiple wells clustered around a manifold and transferring to a fixed or floating facility or directly to an onshore installation.

A subsea production system is divided into the following typical subsystems:

Figure 3 below demonstrates the system architecture for a typical subsea production system. 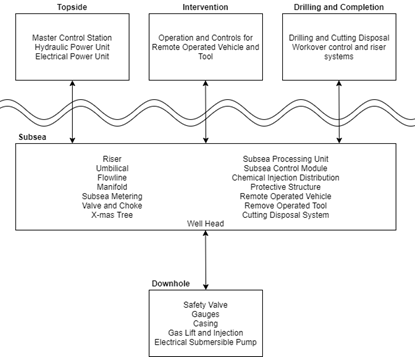 Since the equipment used in the subsea oilfields is often expensive and sophisticated to control, operating them incorrectly can easily lead to a major disaster, financial loss to the company, catastrophic pollution to the environment, and loss of human lives.

A digital copy of the subsea oilfield can be built using software to verify the functionalities and dynamic behaviors of the system before commissioning in different conditions of the energy source, such as temperature and pressure.

Often, the control system implements a combination of interlocks to safeguard the use of the subsea equipment and prevent damage to equipment and accidents. The simulation can provide a means to verify the system interlocks. Shutdown scenarios that cannot be easily created in real life can be built and simulated in the simulator to prove that the control system behaves as designed and expected when a shutdown occurs.

The flowline plays an important role in connecting the subsea trees and manifolds because it sends the oil that has been produced from subsea trees to the manifold. The flow of hydrocarbons can be simulated by opening valves and chokes to validate the operator’s selection of flow paths and alignments.

Another critical function of the control system is to detect oil leaks along the flowline in the production system. Different rates of change in pressure, flow rate, and other leak scenarios can be produced using simulation to ensure that the control system detects and announces the warning of subsea oil leakage.

After learning how to control and simulate subsea automation, the next step is to program these systems.

Most modern high-level computer languages may be preferable to build the Subsea Production System Simulation package. A language that contains a broad range of libraries, such as a graphical library, can expedite the development of the program. 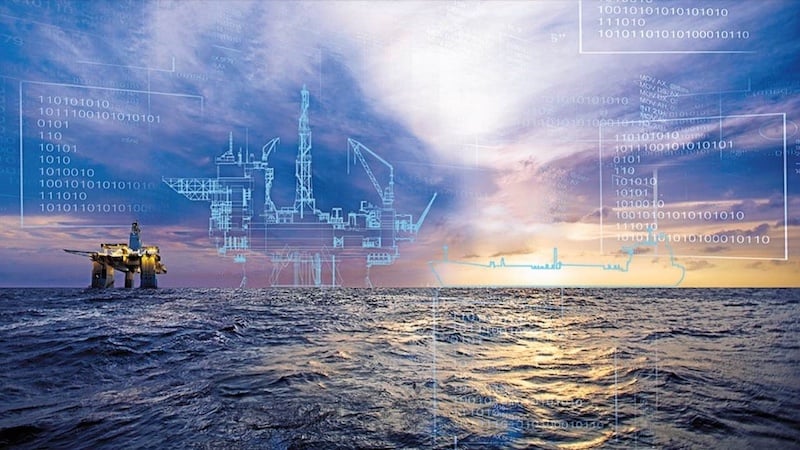 It is helpful to use a programming language with a large user base—online help can easily be obtained, and chances are, most problems and bugs have already been solved by someone.

The language must incorporate an API (application programming interface) to allow the program to communicate with the PLC. If needed, one can utilize other methods to talk with the PLC, such as OPC (Open Platform Communications) or Modbus TCP.

One of the best candidates is C# developed by Microsoft. However, the programming language is mainly limited to Windows operating systems. Another simulation language that engineers often use is Python.

The language is simple to learn and has simpler syntax for fast development. Python is not limited to Windows and can run smoothly on other operating systems such as Linux. Python programmers can use and import existing community-built and open-source libraries for PLC communication to speed up the development.

The most important characteristic of these two languages is OOP (object-oriented programming). The main advantages of OOP are listed below:

OOP languages can represent subsea equipment perfectly since most subsea components are unit-based and assembled to become a more complex system. For example, a valve can be represented as an object in an OOP language.

A valve base class can be defined, and then other valve types can inherit the properties and methods from it. For example, vertical/horizontal and fail open/closed valves can be created to inherit from the valve base class but possess different additional properties of their own.

There’s a lot of specific control technology and programming that goes into subsea automation. While certain subsea systems can be more basic and straightforward, many of these systems are large and complex. It is crucial for engineers to have knowledge about many critical functions to control these systems.