Distributed control systems (DCS) evolved out of control systems for facilities, but their scope can be difficult to fully understand. This article explores the role of a DCS and how it fits in with PLCs and PACs.

The early days of machine control centers were limited by the fairly basic capabilities of the CPUs inside the controllers. Since the computers lacked modern technology, there were many functions of networking, remote control, and data acquisition (just to name a few) that have evolved enormously since those days. The distributed control system, or DCS, is an evolution of control systems for facilities, but its scope can be difficult to fully understand. 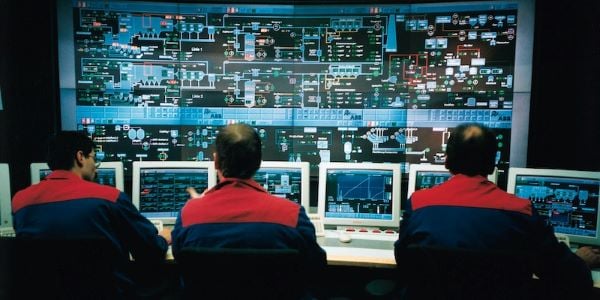 Engineers and electricians working in a modern manufacturing facility understand that process control is far more than a small PID controller attached to various machines. These small controllers may still exist, but the scope of a control system spans across the entire facility — and perhaps between facilities worldwide. This is the intent of a facility-wide implementation of a DCS.

The giant scope of ‘control’ can cause confusion between the terms used to define individual components versus the terms that define the whole system. Someone experienced with industrial technology over the past 20-30 years would likely have an entirely different perspective on a control system than a recent tech school graduate with projects involving the Industrial Internet of Things (IIoT). It makes sense to define a DCS in comparison with familiar pieces of hardware and software to give some idea of the scope of operation.

What does a DCS Accomplish?

A DCS is intended to interconnect the control elements of an entire manufacturing or processing facility. It consists of the hardware as well as the software items required to collect information and send signals at the hardware I/O level, store information, process instructions at a facility server level, and provide the computing power to implement machine learning, complex simulations, and task handling, and secure the data at a corporate-wide computer level. 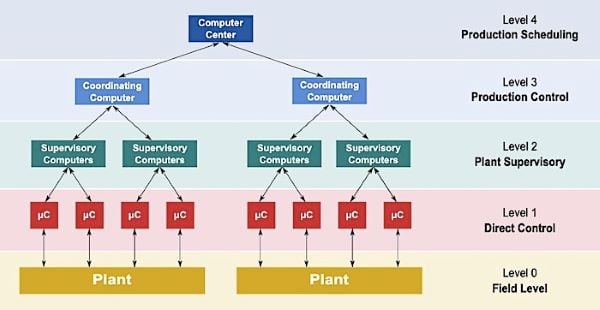 Obviously, the system is quite complex, but it includes control elements from the hardware I/O level and up. Most companies and facilities do include each of these elements built up over generations of technology, so in a sense, this is a primitive DCS. However, the cohesive suite of hardware and software products from one manufacturer can simplify the integration process and remove countless hours of frustrating downtime and maintenance.

How does a DCS Differ from a PLC?

A PLC is a single, recognizable piece of hardware, so it’s a natural tendency to compare the two items — after all, they both provide an advanced level of control for machinery…

The concept of a PLC is to provide control at a local level for just a single machine or cluster of a few machine centers. In this system structure, the control program is stored within just one controller for each part of a larger system. Often, there is very little redundancy, unless you have multiple PLCs.

These days, it’s very common for a PLC system to be upgraded with remote I/O, expanded to many machines with multiple HMIs and VFDs to monitor and control entire processes. This level of implementation starts to become much more similar to a DCS.

In fact, we really don’t call this type of control a PLC anymore. This is called a process automation controller or PAC — such as a Rockwell ControlLogix system, or a Siemens S7-1500 system. Even a small modern PLC can easily control remote automation elements, making it an effective PAC as well.

The main difference remains that in the case of a DCS, the control of the system is performed at a higher level than in the I/O controller itself. The distributed I/O only exists to read system information and control outputs. Then all information is routed back to the main controller, with levels of redundancy to reduce downtime risks and provide easier control modifications when needed.

In these systems, the I/O modules, the networking adapters, the servers and computers, and finally the software suites to control everything are all provided from the same manufacturer to ensure compatibility.

How Can DCS Installation Happen in an Existing System?

It’s easy to see how a brand-new installation can be outfitted with a state-of-the-art DCS. It would be expensive to install any automation system, so you might as well purchase the entire package with the assurance that it will work properly.

However, it’s not impossible to install a DCS over the top of an existing machine-level control system. Most DCS manufacturers do have I/O controllers that appear much more like a PLC and can perform the same function, then as the system is built in place, these controllers can integrate with the system-wide DCS. The added functionality of the software suite monitoring, processing, and securing data are all built right in.

The rapid evolution of technology allows even ‘primitive’ controllers to run large processes, therefore the line between PLC, PAC, and DCS is not very clear.

But in summary, a PLC works with Iocal I/O only, making logical decisions based usually on a ladder program, driving a small machine center. Once that PLC is expended to a system including motion/motor control, HMI, and other networked equipment, it becomes a PAC (although we will likely still refer to them as PLCs).

Finally, when the control is moved from a single machine level up to a system-wide level to allow collection and processing of data over a network including PC workstations, this becomes the structure and purpose of a DCS.