What is the BACnet Protocol and How is it Used in Building Automation Systems to Control Data Exchange?

What is the BACnet Protocol and How is it Used in Building Automation Systems to Control Data Exchange?

Building Automation and Control Network (BACnet) is commonly used in building automation systems. Learn how the BACnet protocol works and the different network technology used to set up the system.

BACnet is a network protocol used in building automation systems (BAS) to control the data exchange between different devices and components. BACnet stands for Building Automation and Control Network. It is a network standard developed by the American Heating Refrigerating and Air Conditioning Engineers. The American National Standard Institute (ANSI) and International Standard for Organization (ISO) have also adopted BACnet as a standard for networking building automation systems.

Utilizing a building automation system is a top choice for many industries, and the need to implement it efficiently is essential. In every building automation system, communication plays a key factor in its success. Communication should be timely and error-free. This is only possible if all manufacturers follow the same set of rules, known as a network protocol. If network protocol isn’t followed, it can waste essential information, resulting in wrong decisions.

Figure 1. An example of devices set up to the same BACnet workstation, which might include BACnet LAN, ARCNET, and BACnet IP. Image courtesy of BACnet.org.

BACnet fulfills all the merits of a standardized protocol. Its universal adoption proves that it is successfully implemented across all the markets.

Characteristics of BACnet include:

How is BACnet Used in Building Automation?

The advantage of BACnet is its feature of interoperability between the many systems and devices used in building automation systems. It does so by providing a standardized method of all the actions that occur and functions in a network communication system.

The BACnet standard is implemented in three ways to serve the purpose of interoperability:

Representation of BACnet Device and Data Type Information as Objects

With BACnet, all the necessary and concerned information is represented in terms of an object. It means that every object represents data or information about a component or device. It is the object that is accessible over the network. Representing information as an object provides the advantage that new objects can be created or existing objects can be changed according to the user’s needs. 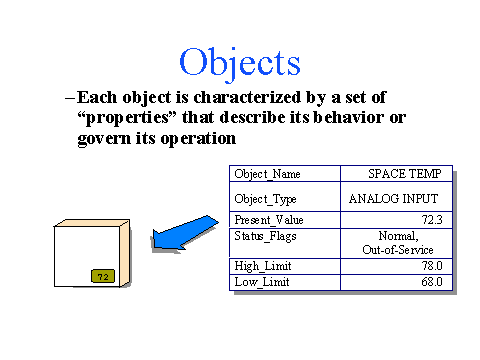 Figure 2. The role of objects within a BACnet setup. When a collection of objects performs a specific function, it is called a BACnet device.​​​​​​​ Image courtesy of BACnet.org.

All objects must have an identifier, data type (i.e., analog or digital value), and additional information such as read-only, modified by other devices, etc.. The BACnet defines a total of 23 standard objects and covers almost all general-purpose functions in a building automation system. A collection of objects performing a specific function is called a BACnet Device.

BACnet’s communication model is the Client-Server model. It deals with the sensing of messages between the controller and different devices. In this model, when there is a data requirement data, the client sends a request to the server. The server, in turn, responds with the required information, called a server response.

There are 38 types of services a BACNet offers divided into:

The final step in implementing BACnet is the selection of a network technology through which all of the information travels to and from designated destinations. Some of the network technologies used include:

The devices that use BACnet are called Native BACnet, which means that devices generate signals that are compatible with the BACnet technology, and can be interconnected with any BACnet network. 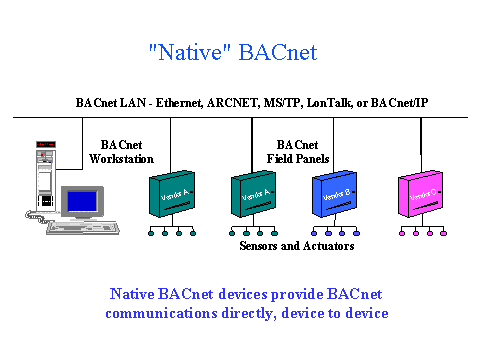 IP is one of the networking technologies that BACnet supports. Support of BACnet-compatible devices can be connected and utilized over an IP network, called BACnet IP. BACnet IP represents a network that uses IP as its networking technique and devices that support IP as a means of communication can be used in the BACnet.

Many companies have their networking technology in the IP structure, even when not connected to the internet, making it easy and cost-effective to implement a BACNet structure.

The devices on the BACNet IP have a unique IP address. The IP address is understandable and recognizable on the BACnet.

Some advantages of BACNet IP are: