Three-phase AC is the dominant mode of electric power generation and distribution in modern societies. Analyzing voltages and currents in these systems can be quite complex, but phasor representation is a tool useful for simplifying that analysis by representing voltage and current quantities in graphical form. This section of the book illustrates the use of phasors as an analytical tool through examples. This section begins with single-phase phasor analysis and progresses to three-phase phasor analysis.

Extensive use of an imaginary instrument I call the “phasometer” helps relate phasor arrow direction to real circuit connections. Suffice it to say, a “phasometer” is nothing more than a small synchronous AC motor with an arrow-shaped rotor, which when coupled with a strobe light set to flash whenever some reference voltage reaches its positive peak, graphically shows the relative phase of the measured quantity with respect to that reference voltage. In other words, a phasometer/strobe combination shows a “snapshot” view of the waveform’s position at that point in time when the reference wave it at its positive peak. This is precisely how phasors are drawn: arrows with angles displaced from 0\(^{o}\) by an amount proportional to the phase shift between that quantity and some reference waveform.

Here is what a triplet of phasometers would indicate if connected to a three-phase power bus, with phase A used as the reference and given an ABC phase sequence (also called “phase rotation”): 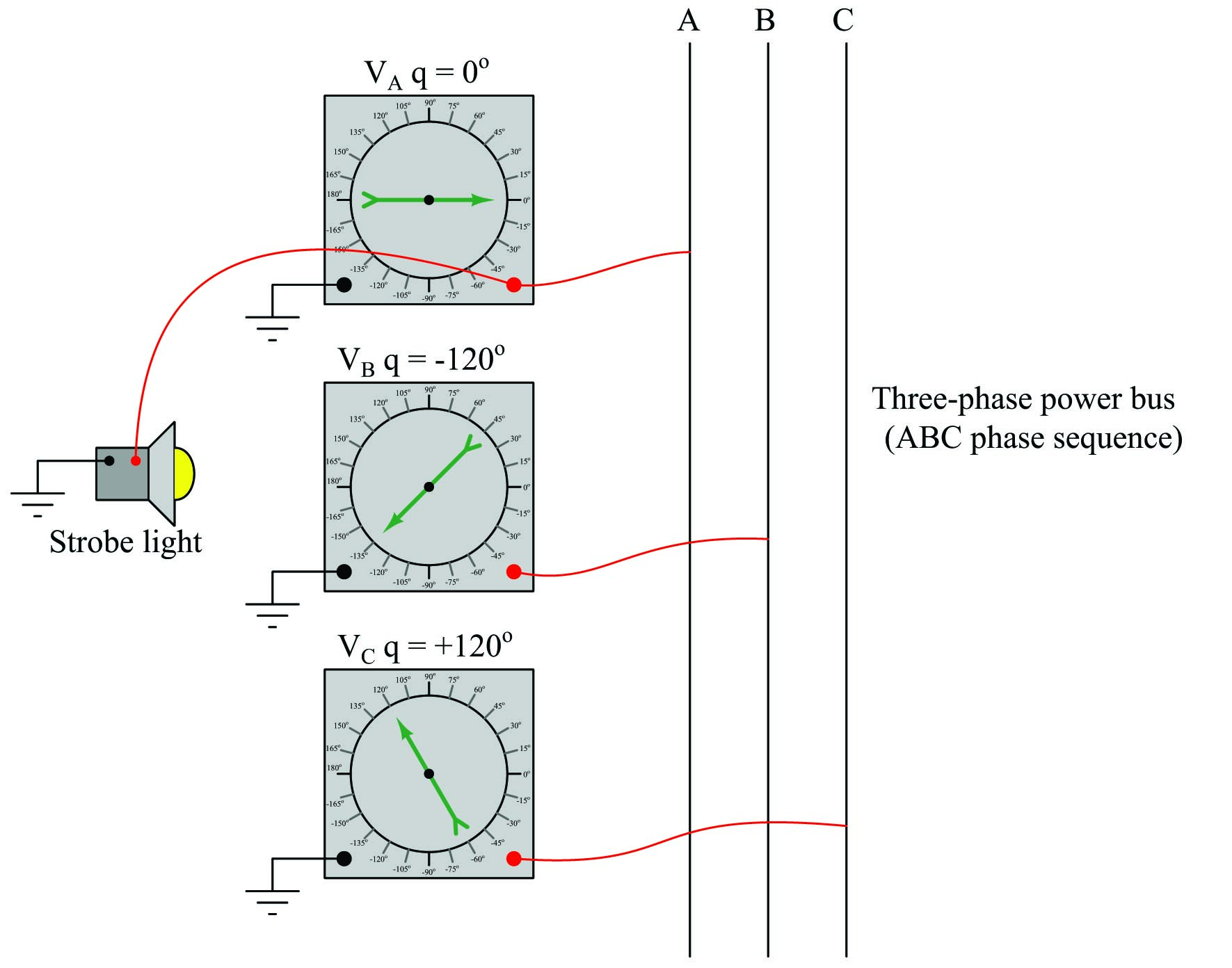 In the “Basic principles” discussion of the “Transformers” section of this book, we used standard DC polarity marks (+ and \(-\)) to denote the polarity of voltage at an instant in time where the sinusoidal waves for each winding reached their peaks. Although it is often important to show the polarity of transformer windings relative to each other, the use of DC notation for this purpose can be misleading. An alternative symbology places a dot, or square, or some other distinguishing mark at one end of each transformer winding to show common polarity at any instant in time. The marked terminal of a transformer winding is called the “polarity” terminal, while the unmarked terminal is called the “nonpolarity” terminal:

The marks should be interpreted in terms of voltage polarity, not current. To illustrate using a “test circuit” feeding a momentary pulse of DC to a transformer:

Consider these examples, where the polarity of a transformer’s secondary winding is changed to illustrate the effect on AC phase shift from primary to secondary. In the left-hand example, the “polarity” terminal of the transformer’s secondary winding exhibits a phase angle of 0\(^{o}\) (with respect to ground) at the same point in time when the primary winding’s voltage is at 0\(^{o}\): the two winding voltages are in-phase with each other. In the right-hand example, the secondary winding polarity has been reversed, the effect being a 180\(^{o}\) phase shift in voltage. A pair of phasometers in each example, both synchronized to the positive peak of the primary voltage, shows the phase relationships clearly:

A useful way to analyze phase shifts in transformer circuits is to sketch separate phasor diagrams for the primary and secondary windings, and use the polarity marks on each winding to reference each phasor’s position on the diagram. We begin this analysis by first sketching a phasor for any voltage of which the phase angle is given to us. Since transformer windings share common phase shift by virtue of those windings sharing the same magnetic field, the phasor representing the other winding’s voltage must possess the same angle. The only distinction is the length of each phasor (representing primary and secondary voltage magnitudes) and its origin (starting point on the diagram). 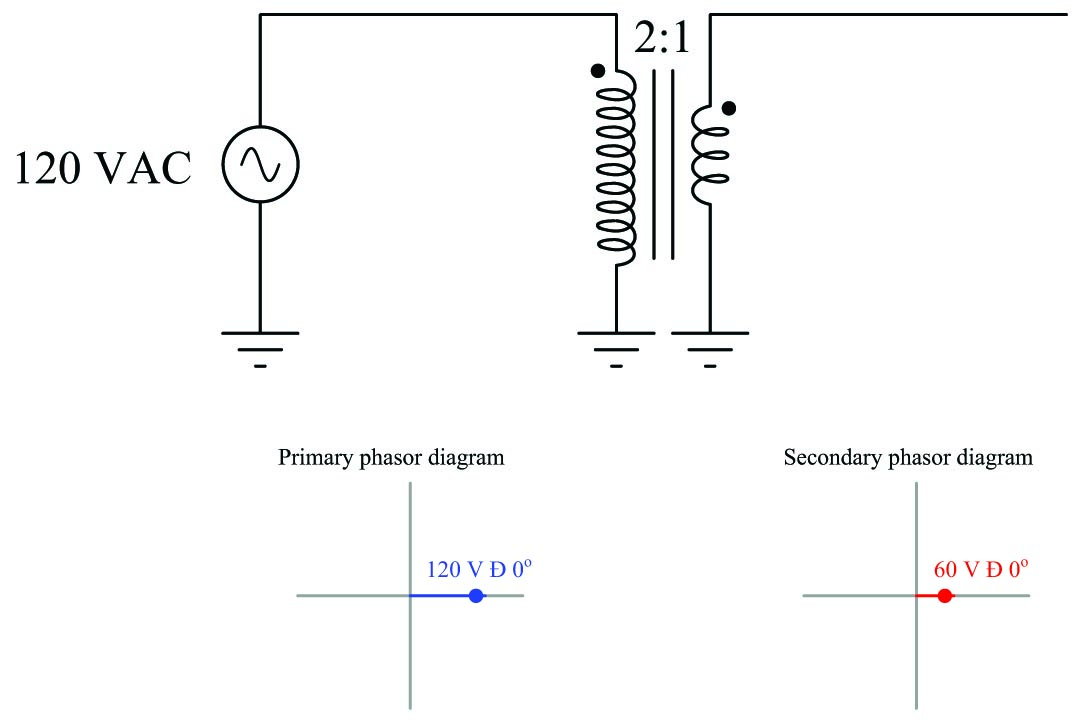 The result is a pair of phasors both at 0\(^{o}\) angles. Note the placement of dots on each phasor to mark the relationship of the phasor to each winding polarity. The center of the diagram where the real and imaginary axes intersect is the point representing zero potential (ground). The length of each phasor tells us the magnitude of each waveform, in this case 120 volts and 60 volts AC, respectively. The “nonpolarity” end of each phasor line must be located at the origin because the nonpolarity terminal of each transformer winding is connected to ground. 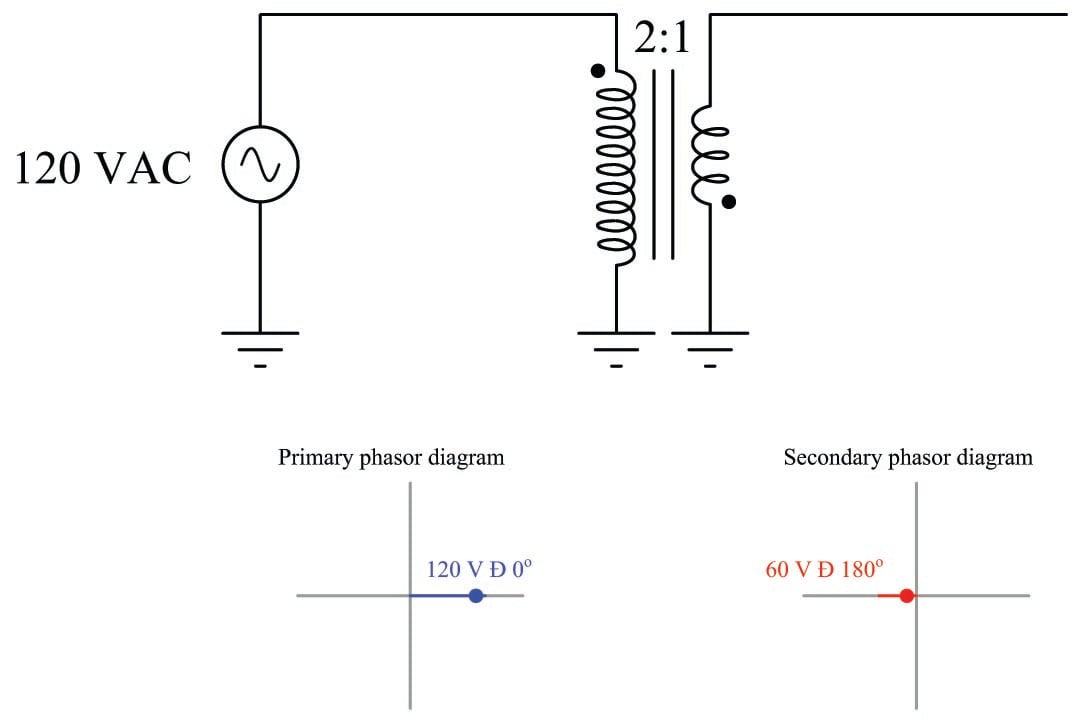 Here we have an “autotransformer” connected to boost the primary voltage. The \(V_P\) and \(V_S\) phasors representing voltage across the primary and secondary windings must have common angles (i.e. both horizontal phasors), but the secondary phasor is “stacked” on the end of the primary phasor to create a longer phasor representing the voltage \(V_{out}\) with reference to ground. We can tell the phasors will be stacked polarity-end-to-nonpolarity-end because that is how the two transformer windings are electrically connected to each other: 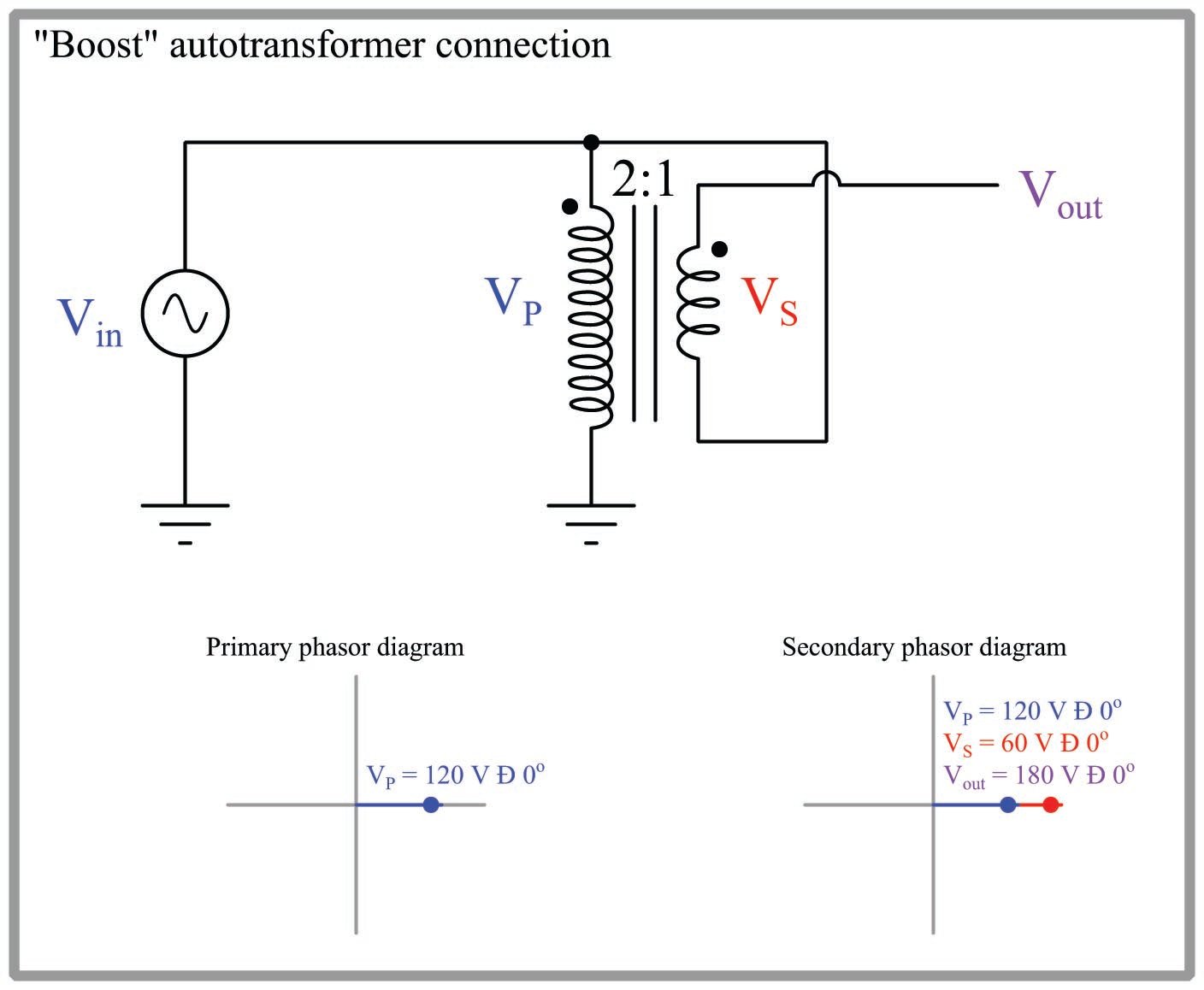 Here we have another autotransformer, this time connected to buck the primary voltage. The \(V_P\) and \(V_S\) phasors still share common angles, but now they are “stacked” differently: polarity-end-to-polarity-end. This is challenging to see on the second phasor diagram because the \(V_P\) and \(V_S\) overlap each other, sharing a common “polarity” (dot) end point: 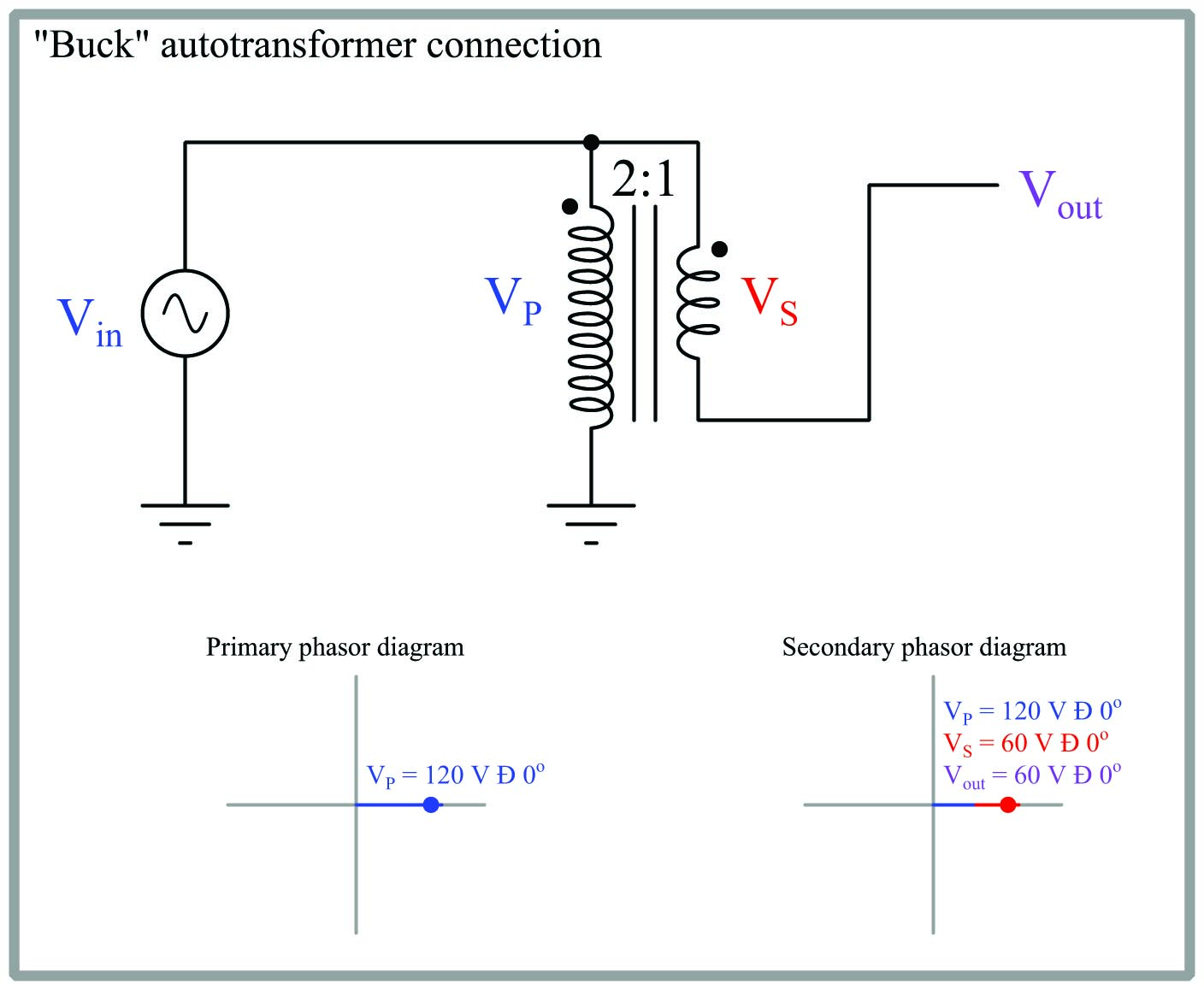 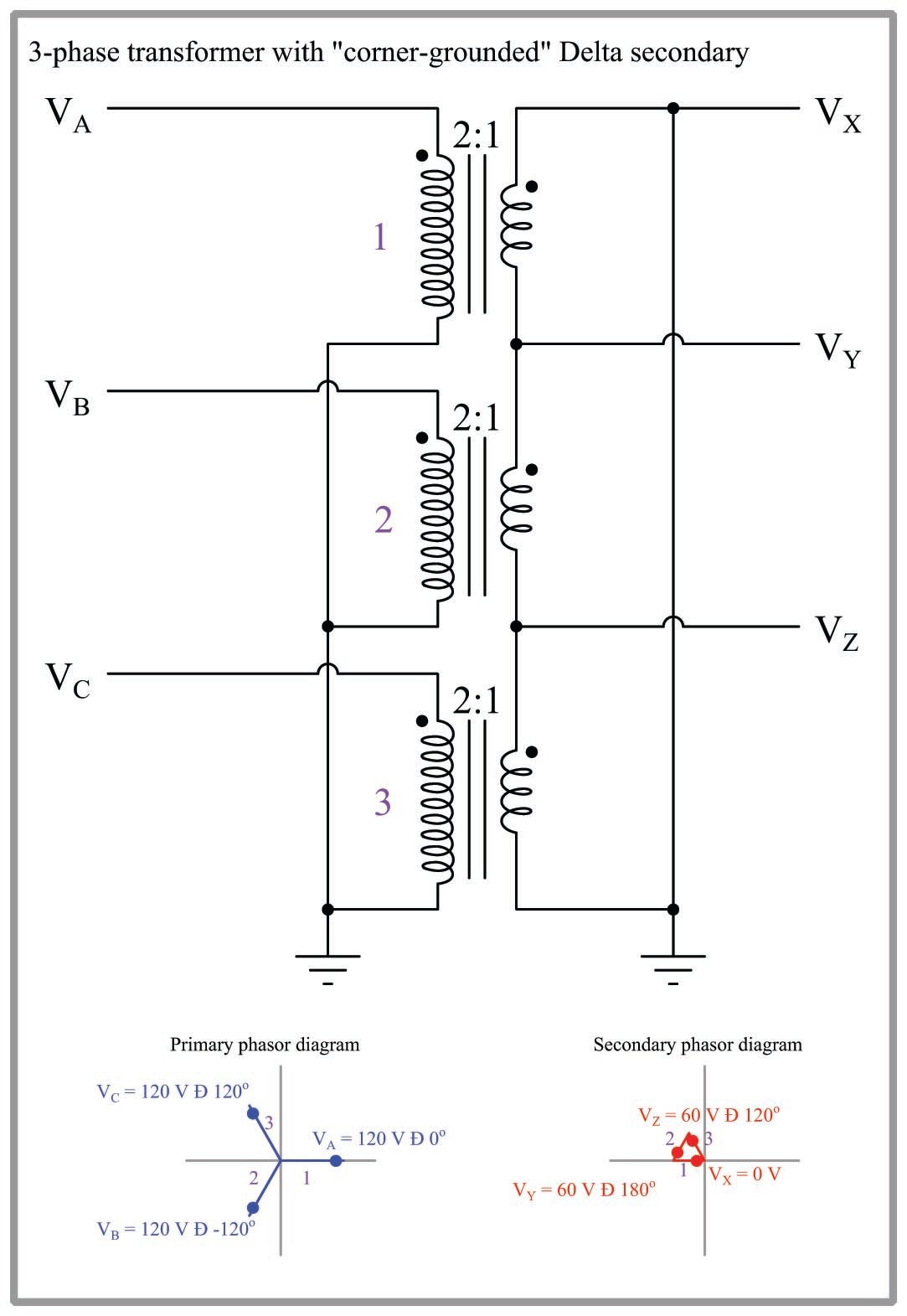