As we have seen, the concept of differentiation is finding the rate-of-change of one variable compared to another (related) variable. In this section, we will explore the practical application of this concept to real-world data, where actual numerical values of variables are used to calculate relative rates of change.

In industrial instrumentation, for example, we are often interested in knowing the rate of change of some process variable (pressure, level, temperature, flow, etc.) over time, and so we may use computers to calculate those rates of change, either after the fact (from recorded data) or in real time (as the data is being received by sensors and acquired by the computer). We may be similarly interested in calculating the rate at which one process variable changes with respect to another process variable, both of which measured and recorded as tables of data by instruments.

Numerical (data-based) differentiation is fundamentally a two-step arithmetic process. First, we must use subtraction to calculate the change in a variable between two different points. Actually, we perform this step twice to determine the change in two variables which we will later compare. Then, we must use division to calculate the ratio of the two variables’ changes, one to the other (i.e. the “rise-over-run” steepness of the function’s graph).

For example, let us consider the application of pressure measurement for a pipeline. One of the diagnostic indicators of a burst pipeline is that the measured pressure rapidly drops. It is not the existence of low pressure in and of itself that suggests a breach, but rather the rate at which the pressure falls that reveals a burst pipe. For this reason, pipeline control systems may be equipped with automatic shut-down systems triggered by rate-of-change pressure calculations.

The association of rapid pressure drop with pipeline ruptures is nothing new to pipeline operations. Here is an illustration taken from page 566 of volume 8 of Cassier’s Magazine published in the year 1895, showing water pressure measurements taken by a paper strip chart recorder on a city water main line. The pressure drop created by a burst in that 36-inch pipe is clearly seen and commented on the recording:

An example of a modern pressure-trend recording during a pipeline rupture is shown here: 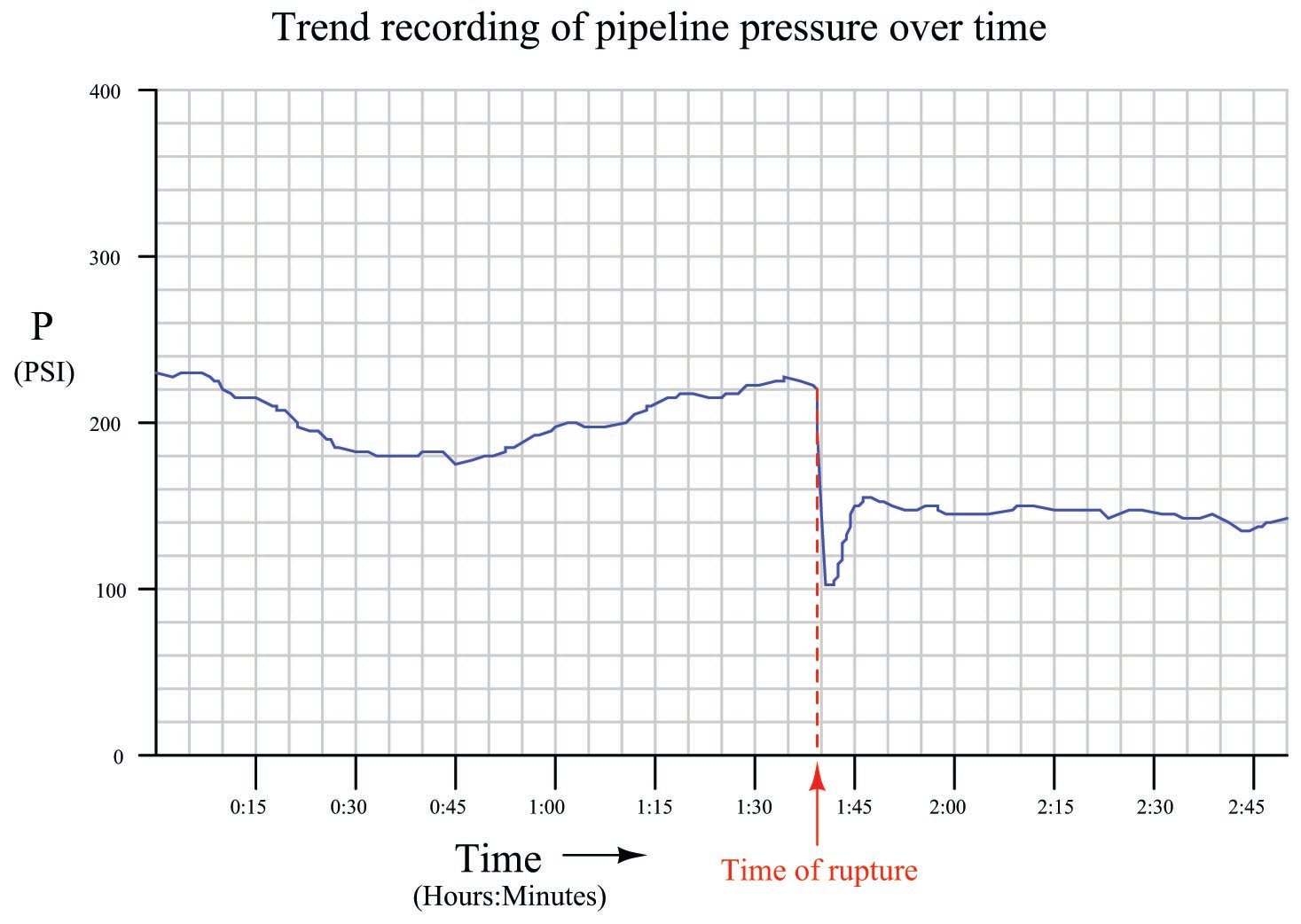 While it may seem surprising that pipeline pressure should recover after the low point immediately following the pipe’s rupture, it is important to bear in mind that many pipelines are pressure-controlled processes. After a pipeline ruptures, the pumping equipment will attempt to compensate for the reduced pressure automatically, which is why the pressure jumps back up (although not to its previous level) after the initial drop.

This phenomenon helps explain why pressure rate-of-change is a more reliable diagnostic indicator of a ruptured pipe than pressure magnitude alone: any automatic rupture-detection scheme based on a simple comparison of pipeline pressure against a pre-set threshold may fail to reliably detect a rupture if the pressure-regulating equipment is able to quickly restore pipeline pressure following the rupture. A rate-of-change system, on the other hand, will still detect the rupture based on the sharp pressure decrease following the break, even if the pressure quickly recovers.

A computer tasked with calculating the pressure’s rate of change over time (\(dP \over dt\)) would have to continuously sample the pressure value over short time periods, then calculate the quotient of pressure changes over time changes. Given a sample rate of once every 5 minutes, we see how the computer would tabulate the pressure data over time: 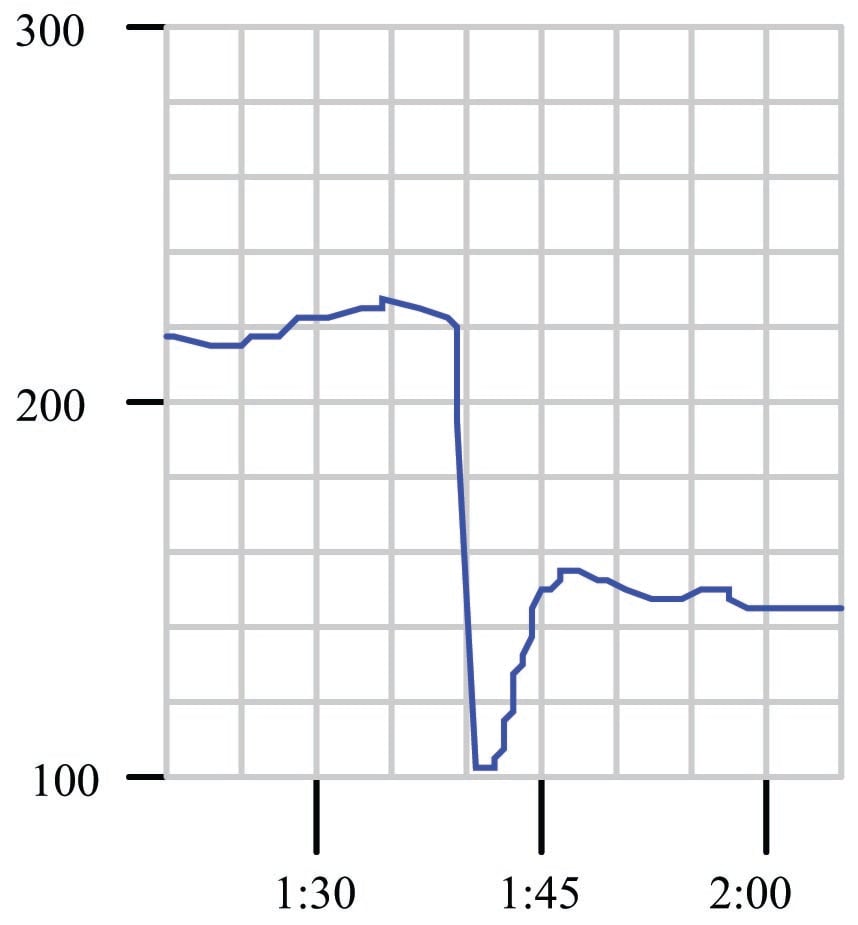 To calculate the rate of pressure change over time in each of these periods, the computer would subtract the two adjacent pressure values, subtract the two corresponding adjacent time values, and then divide those two differences to arrive at a figure in units of PSI per minute. Taking the first two data coordinates in the table as an example:

The sample period where the computer would detect the pipeline rupture lies between 1:35 and 1:40. Calculating this rate of pressure change:

As you can see, the pipeline monitoring computer is not technically calculating derivatives (\(dP \over dt\)), but rather difference quotients (\(\Delta P \over \Delta t\)). Being a digital device, the best it can ever do is perform calculations at discrete points in real time. It is evident that calculating rates of change over 5-minute period misses a lot of detail. The actual rate of change at the steepest point of the pressure drop far exceeds \(-15.26\) PSI per minute.

It is possible for us to calculate the instantaneous rate-of-change of pressure (\(dP \over dt\)) at the moment of the rupture by examining the graph and sketching a straight line called a tangent line matching the slope where the graph is steepest. Our goal is to calculate the exact slope of that single (steepest) point on that graph, rather than an estimate of slope between two points as the computer did. In essence, the computer “drew” short line segments between pairs of points and calculated the slopes (rise-over-run) of those line segments. The slope of each line segment is a difference quotient: \(\Delta P \over \Delta t\). The slope of a tangent line matching the slope at a single point on the function graph, however, is a derivative: \(dP \over dt\).

First we sketch a tangent line (by hand) matching the steepest portion of the pressure trend graph. Then, we calculate the slope of a tangent line by marking convenient points where the line intersects major division marks on the graph’s graduated scale, then calculating rise over run: 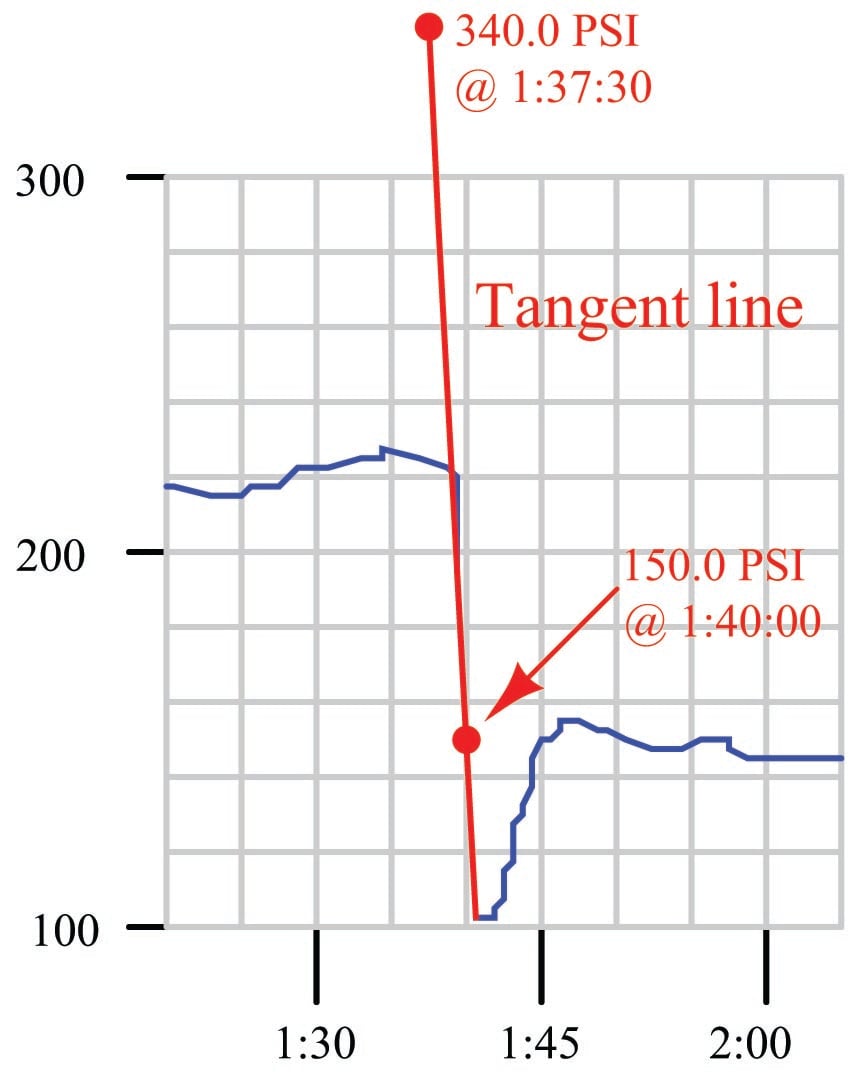 An algorithm applicable to calculating rates of change in a digital computer is shown here, using a notation called pseudocode. Each line of text in this listing represents a command for the digital computer to follow, one by one, in order from top to bottom. The LOOP and ENDLOOP markers represent the boundaries of a program loop, where the same set of encapsulated commands are executed over and over again in cyclic fashion: