As we have seen, the concept of integration is finding the accumulation of one variable multiplied by another (related) variable. In this section, we will explore the practical application of this concept to real-world data, where actual numerical values of variables are used to calculate accumulated sums.

In industrial instrumentation, for example, we are often interested in calculating the accumulation of some process fluid based on a measured flow rate of that fluid. The rate is, of course, expressed in either mass or volume units per unit time (e.g. gallons per minute), but the total accumulated quantity will be expressed plainly in either mass or volume units (e.g. gallons). We may use computers to calculate those accumulated quantities, either after the fact (from recorded data) or in real time.

To illustrate, we will first focus on the integration of a flow measurement signal with respect to time. The flow rate of any fluid is always expressed in units of volume or mass per unit time. Common volumetric flow units are gallons per minute, liters per second, cubic feet per day, etc. Common mass flow units are pounds per hour, kilograms per minute, slugs per second, etc. If we desire to calculate the volume or mass of fluid passed through a pipe – representing fluid added to or removed from a system – over some interval of time, we may do so by integrating flow rate with respect to time:

\(a\) = Starting point of integration interval

\(b\) = Ending point of integration interval

As always, integration is fundamentally a matter of multiplying one variable by small increments of another variable. If a flow rate is integrated with respect to time, the result is that the unit for time becomes eliminated. Gallons per minute, for example, becomes gallons after integration; kilograms per second becomes kilograms; etc.

The elimination of time units is also evident if we re-write the integrands in the previous equations to show volumetric and mass flow rates (\(Q\) and \(W\), respectively) as the rates of change they are (\(Q = {dV \over dt}\) and \(W = {dm \over dt}\)):

It should be clear that the time differentials (\(dt\)) cancel in each integrand, leaving:

A flowmeter measuring the flow rate of a fluid outputs a signal representing either volume or mass units passing by per unit time. Integrating that signal with respect to time yields a value representing the total volume or mass passed through the pipe over a specific interval. A physical device designed to perform this task of integrating a signal with respect to time is called an integrator or a totalizer:

An example of a flow integrator, or flow totalizer, made for pneumatic instrument systems is the Foxboro model 14. A view of this instrument’s front face shows an odometer-style display, in this particular case showing the total number of pounds (lb) of fluid passed through the pipe, with a multiplying factor of 10:

The fact that this instrument’s display resembles the odometer of an automobile is no coincidence. Odometers are really just another form of mechanical integrator, “totalizing” the distance traveled by a vehicle. If the speedometer of a vehicle registers speed (\(v\)) in units of miles per hour, then the odometer will accumulate a distance (\(\Delta x\)) in units of miles, since distance (miles) is the time-integral of speed (miles per hour):

In this particular case, where the flowmeter measures pounds per hour, and the integrator registers accumulated mass in pounds, the integration of units is as follows:

The Foxboro model 14 used a turbine wheel driven by a jet of compressed air from a nozzle. The wheel’s speed was made proportional to the process fluid flow rate sensed by a pneumatic DP transmitter. As process flow rate increased, the wheel spun faster. This spinning wheel drove a gear-reduction mechanism to slowly turn the odometer-style numerals, registering total fluid quantity passed through the flowmeter: 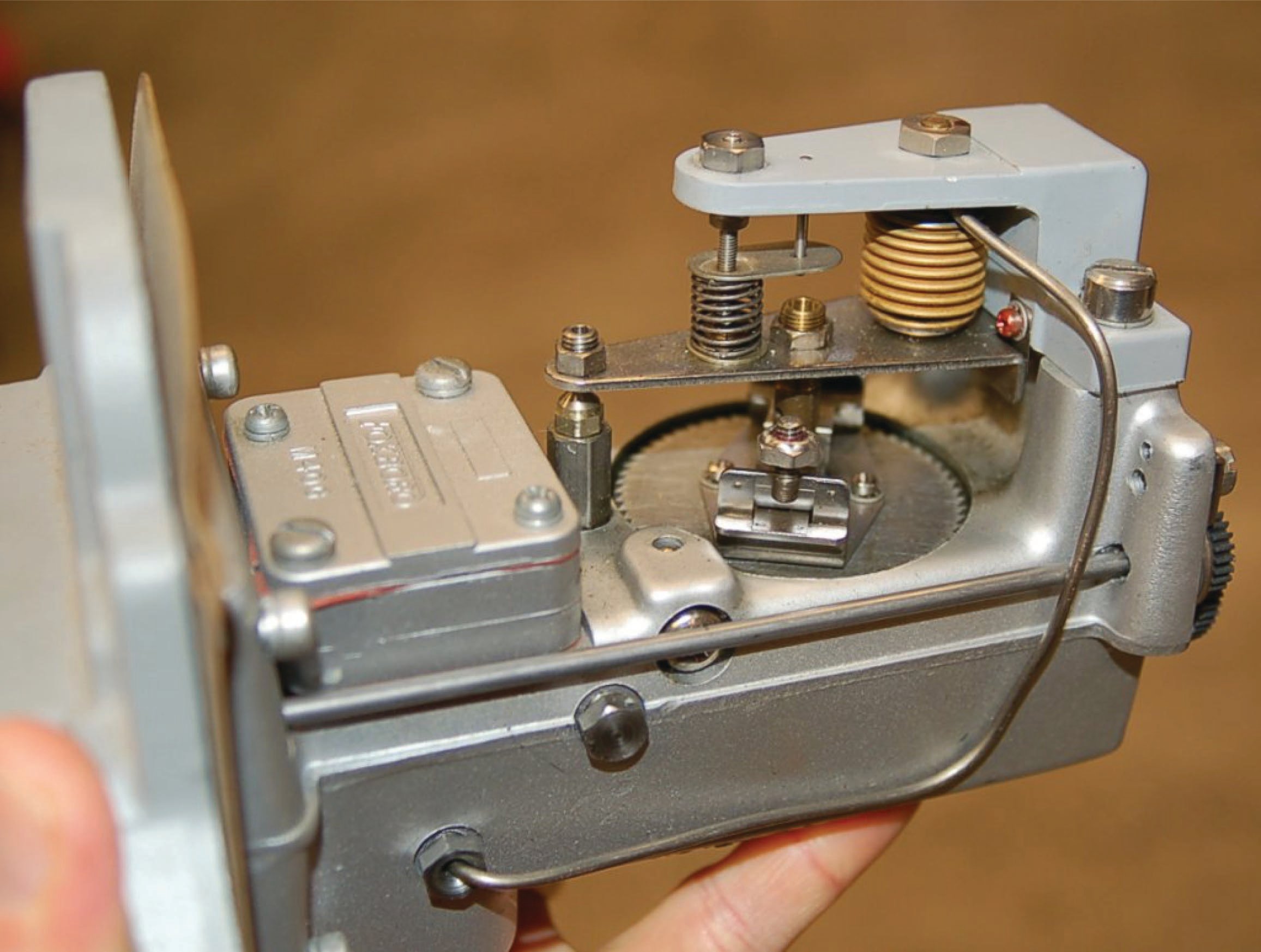 As pneumatic signal pressure (3-15 PSI) from a pneumatic flow transmitter entered the brass bellows of this instrument, it pressed down on a lever, forcing a baffle toward a nozzle. As nozzle backpressure rose, amplified air pressure spun the turbine wheel to drive the integrating “odometer” display. Mounted on the turbine wheel was a set of fly-weights, which under the influence of centrifugal force would press upward on the lever to re-establish a condition of force-balance to maintain a (relatively) constant baffle-nozzle gap. Thus, the force-balance mechanism worked to establish an accurate and repeatable relationship20 between instrument signal pressure and integration rate.

A very different style of integrator appears here, as part of the controller for a ball mill used to crush limestone into small pieces for the manufacturing of concrete. Limestone is fed into the ball mill on a device called a weighfeeder, which measures the mass of limestone as it passes over a conveyor belt. The controller maintains a limestone “flow rate” at a setpoint specified in tons per hour (mass flow of solid material). The red LED digital display shows the total number of tons passed through the mill: 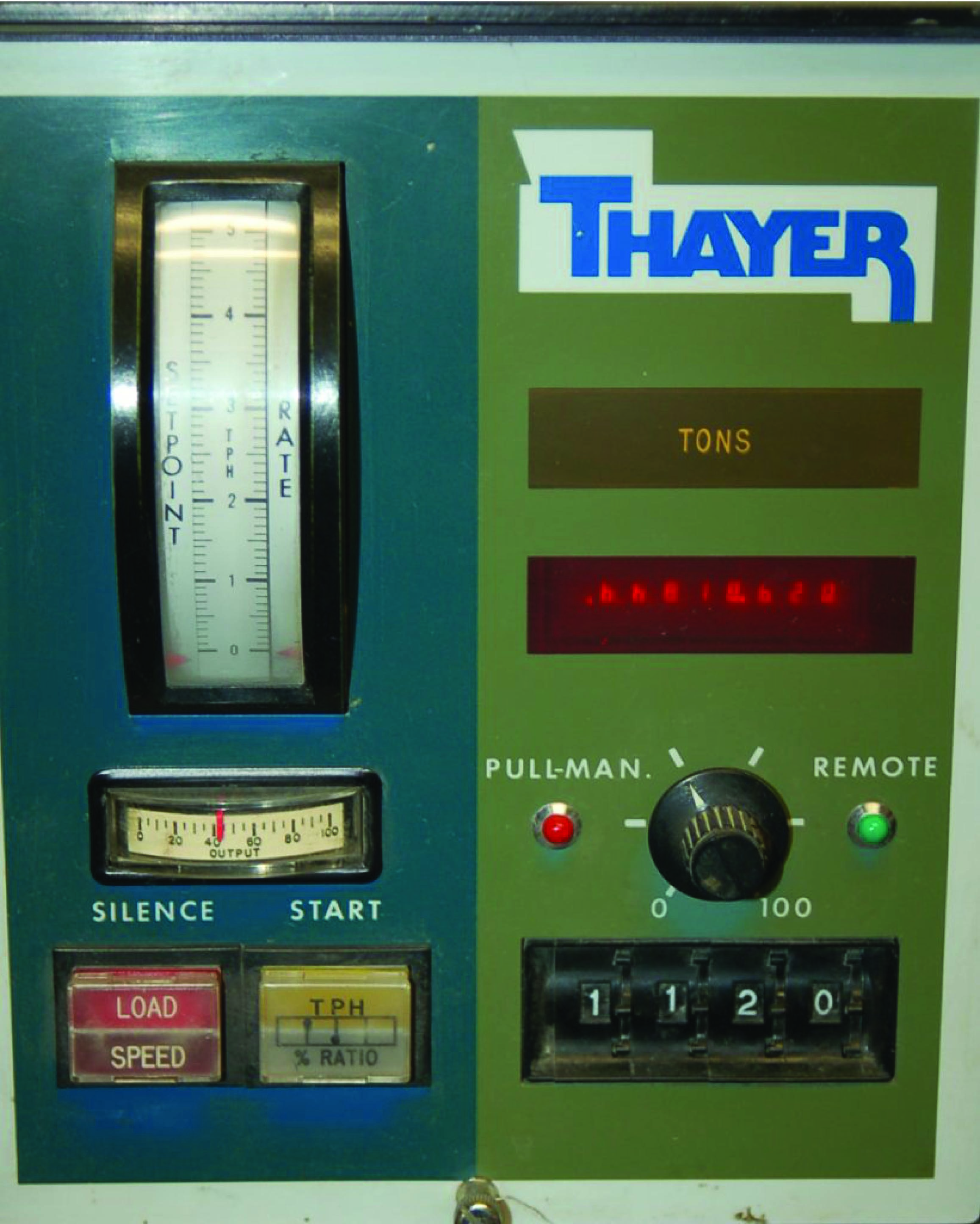 The units involved in the integration of limestone “flow” into the ball mill are slightly different from the example shown with the Foxboro model 14 totalizer, but the concept is the same:

An algorithm applicable to integrating real signals with respect to time in a digital computer is shown here, once again using “pseudocode” as the computer language. Each line of text in this listing represents a command for the digital computer to follow, one by one, in order from top to bottom. The LOOP and ENDLOOP markers represent the boundaries of a program loop, where the same set of encapsulated commands are executed over and over again in cyclic fashion: