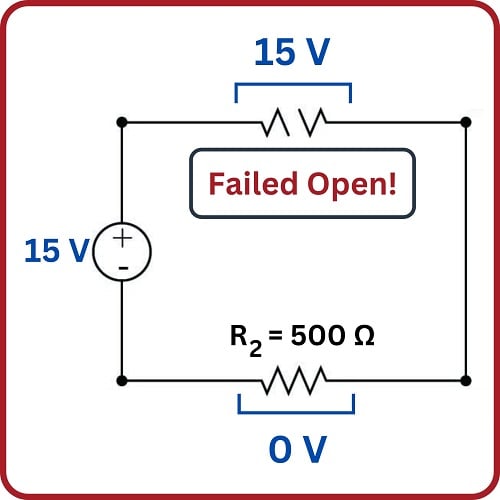 DC electrical fault analysis is surprisingly one of the simplest processes in electronics. Most failures are limited to three problems: open circuit, short circuit, or unwanted change in resistance.

Perhaps the most valuable skill an instrument technician can possess is the ability to efficiently diagnose malfunctioning systems: determining in as short a time as possible the cause of a system’s malfunction. Since most instrumentation and control systems are based on electricity, a solid understanding of electrical faults is the foundation of this skill set. In this section we will explore the two basic types of electrical faults (opens and shorts) and analyze their respective effects in DC circuits.

An open is an electrical fault whereby the pathway for electrical current is broken, thus preventing the passage of current. A short is an electrical fault whereby two points in a circuit that are supposed to be separated are joined together by a conductive pathway. It should be noted that this definition for the word “short” both is technical and specific. This is important to understand, as many people tend to use the word “short” to refer to any electrical problem in general. In technical parlance, a “short” fault is the exact opposite of an “open” fault, and should never be confused one for the other.

Let us examine the effects of both faults in a simple two-resistor DC circuit. We will begin with an analysis of the circuit in a healthy condition, showing all values of voltage and current: 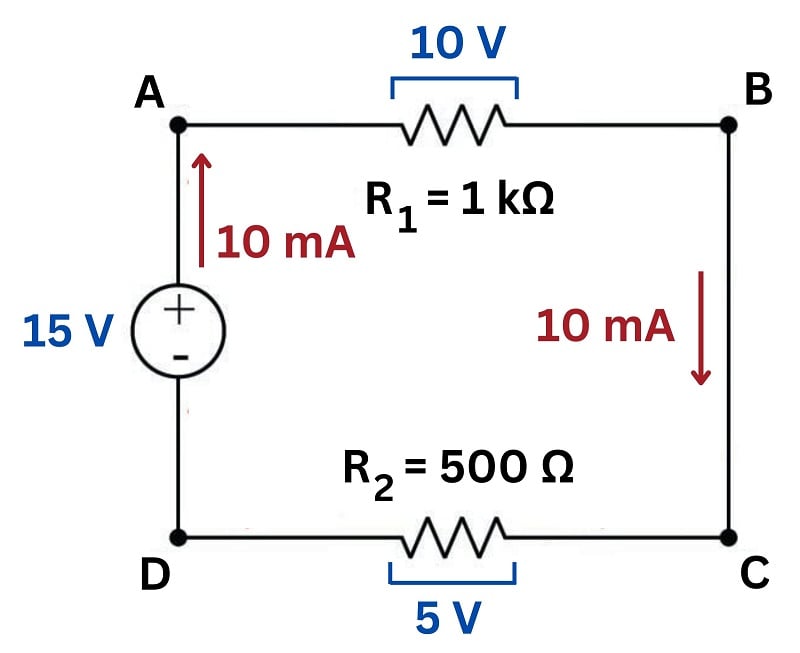 Being a series circuit, the current is the same through all components while the two loads’ voltage drops add to equal the source voltage.

Now suppose resistor \(R_1\) fails open. We know that a continuous electric current is able to exist only where there is a continuous path for that current. If a component fails open, the continuity of the circuit will be broken, and current must halt. Since this is a series circuit, if current halts in one location it must likewise halt in all locations: 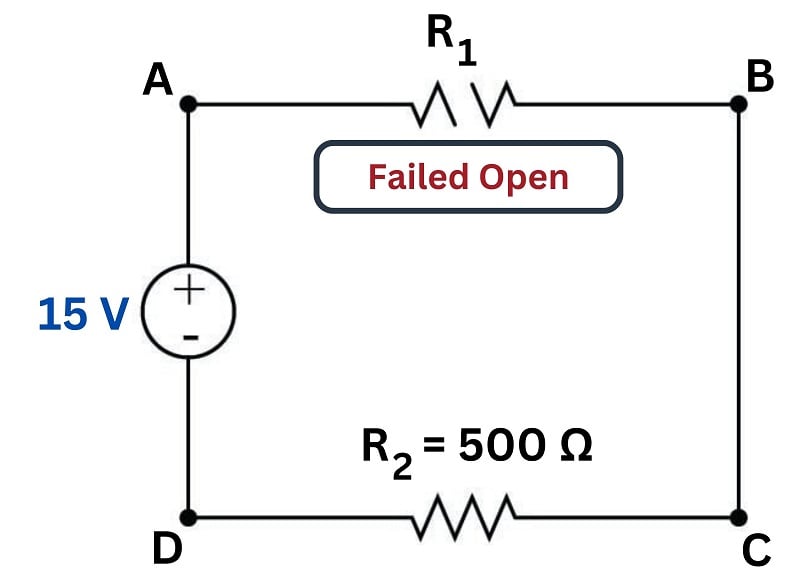 We would still expect to measure 15 volts between test points A and B because it is the nature of a voltage source to maintain a constant voltage across its terminals (i.e. to maintain the same amount of energy difference per unit charge from one side to the other). We may apply Ohm’s Law to calculate the voltage across the healthy resistor \(R_2\): since \(V = IR\) and \(I = 0\), we may safely conclude that \(V = 0\) for resistor \(R_2\).

Unfortunately, we cannot apply Ohm’s Law to the failed resistor \(R_1\) since the resistance of any failed-open component is infinite. Infinitudes do not lend themselves to arithmetic calculations (how much is zero times infinity?), and so we must find some other way to determine the voltage dropped across the open \(R_1\). Here we find that Kirchhoff’s Voltage Law applies very nicely: if we know that the algebraic sum of all voltages in a loop must equal zero, and we know all but one of the voltages in the loop BACDB, we may calculate the last voltage by simple addition and subtraction:

Clearly, the voltage between points A and C (across the failed-open \(R_1\)) must be \(-15\) volts in order to satisfy Kirchhoff’s Voltage Law. The negative sign of \(V_{AC}\) tells us that point C must be at a lesser potential than point A (i.e. A is positive and C is negative). 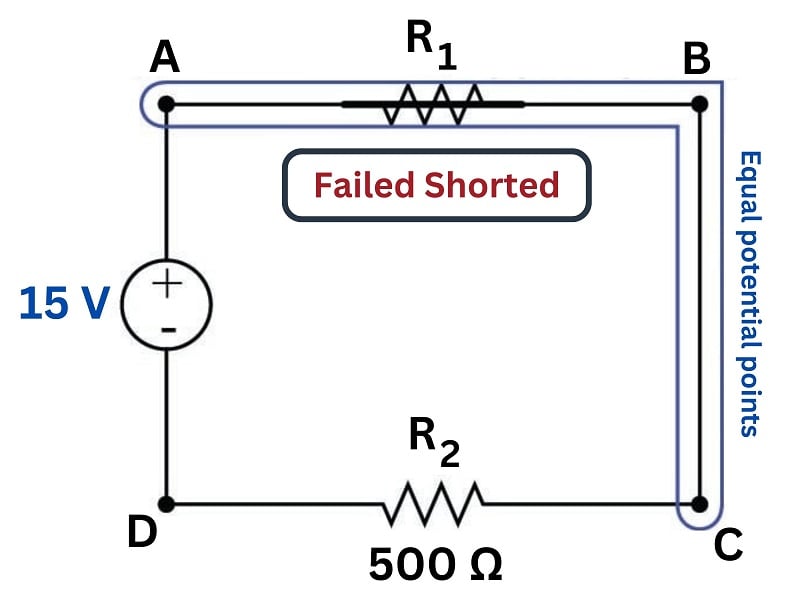 The negative sign of \(V_{DB}\) tells us that point B must be at a lesser potential than point D (i.e. D is positive and B is negative). Calculating the amount of current in this circuit is now a simple matter of applying Ohm’s Law to resistor \(R_2\). Given a 15 volt potential across it and 500 ohms of resistance, the current is equal to 30 milliamps:

All DC circuit fault analysis reduces to these simple principles: open faults directly affect current by interrupting the continuity of the circuit, while shorted faults directly affect voltage by making points equipotential to each other that were not equipotential before. The rest is merely applying Kirchhoff’s and Ohm’s Laws to determine the consequences of the fault throughout the circuit.