By definition, a source is a device delivering energy into a system, while a load is a device extracting energy from a system. Examples of typical electrical sources include generators, photovoltaic cells, thermopiles, and primary-cell batteries. These devices create electrical voltage, which in turn motivates electrical current to flow in a circuit. Examples of typical electrical loads include resistors, lamps, and electric motors. These devices resist the flow of electrical current through them, creating a voltage drop as a result.

The way in which we designate the direction of current (charge flow) becomes very important here. Since there are two commonly accepted notations – electron flow and “conventional” flow, exactly opposite of each other – it is easy to become confused. 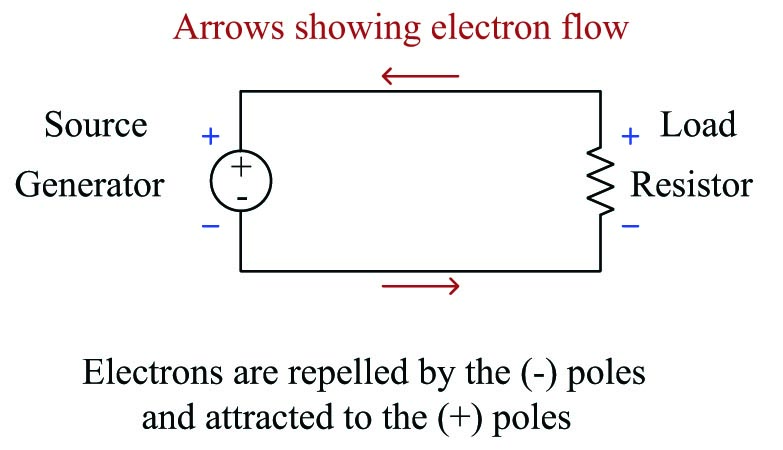 Next we see a diagram showing the same source and load, this time using “conventional” flow notation to designate the direction of current. Here we must imagine positively-charged carriers moving through the wires instead of electrons. These positive charge carriers are repelled by any positive (+) pole and attracted to any negative (\(-\)) pole. Viewed in this light, we see the exact same principle at work: the source device is seen to motivate the flow of these positive charge carriers while the load device resists the flow: 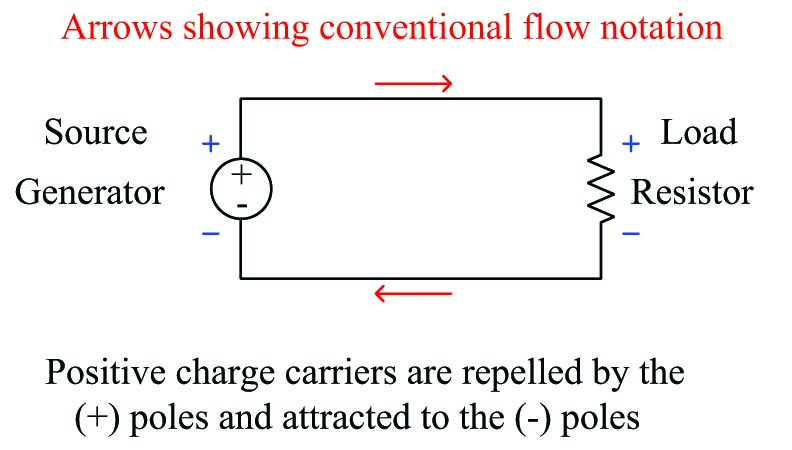 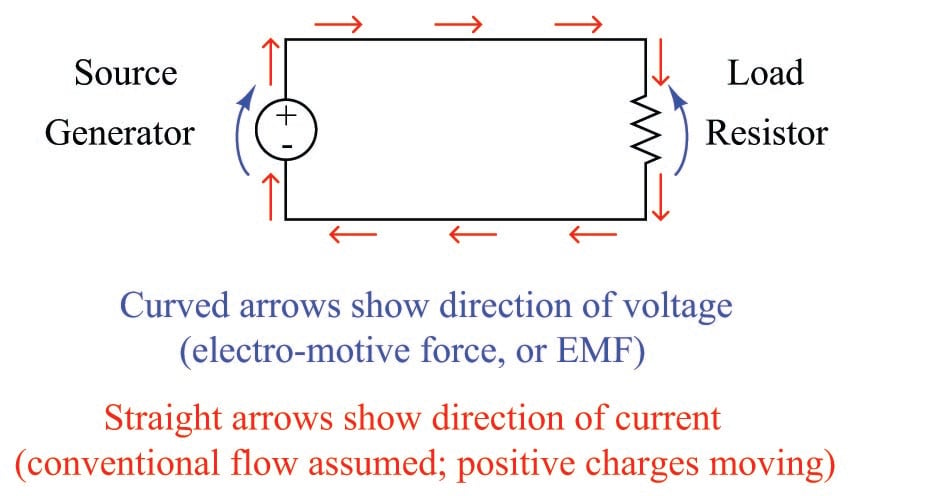 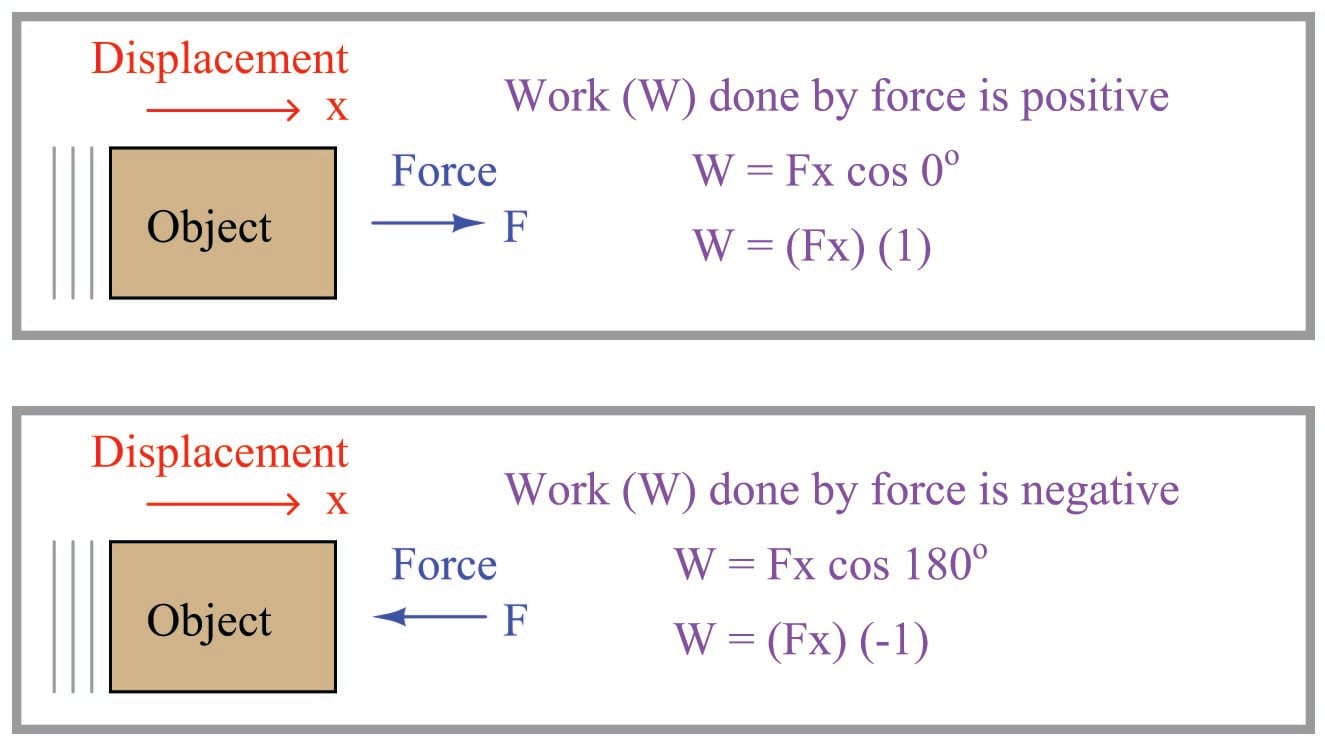 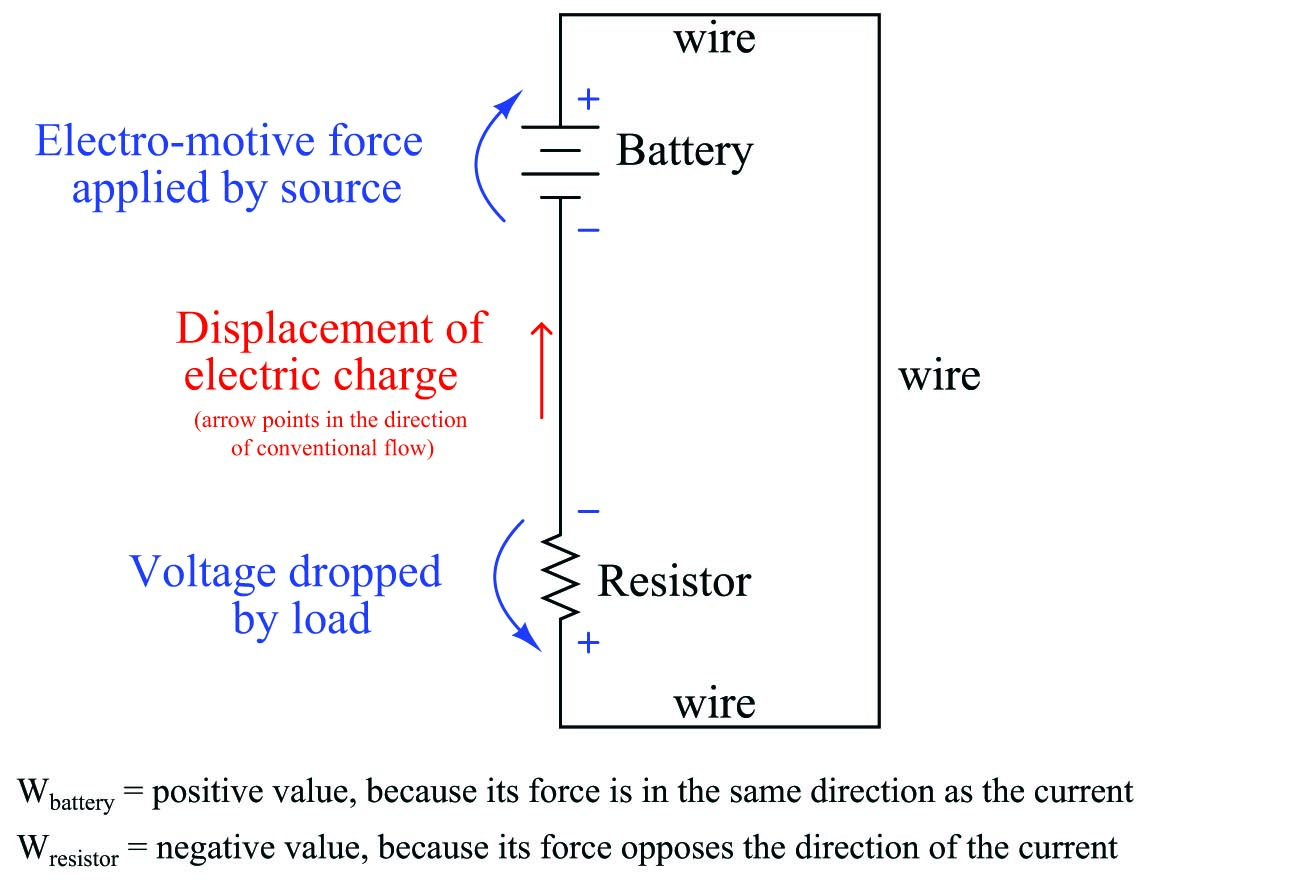 If we examine a hydraulic system, where a pump pushes fluid around a pipe loop and an orifice (called a “restrictor”) restricts the flow of this fluid, we see this same concept in action: the pump’s pressures at its discharge and suction ports work for the direction of fluid flow, while the pressures at the upstream and downstream ports of the restrictor work against the direction of fluid flow. The pump acts as a power source in this hydraulic “circuit” (infusing energy into the system) while the restrictor acts as a power load (extracting energy from the system):

We may even see this concept revealed in a simple mechanical system where work is being done. Examine the case of a crane lifting a heavy weight into the air, shown below. As the crane lifts the weight upward, the crane’s upward force on the weight is clearly working for the direction of motion, while the weight’s downward force against the crane is clearly working against the direction of motion: 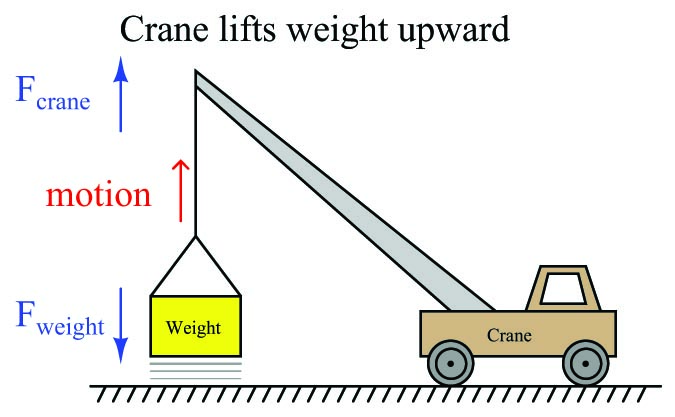 Thus, the crane is doing positive work (acting as a source, infusing potential energy into the weight) while the weight is doing negative work (acting as a load, absorbing potential energy from the crane). A mathematically rigorous way to demonstrate this is to calculate the work done by each using the formula \(W = \vec{F} \cdot \vec{x}\) or \(W = F x \cos \theta\). Since the crane’s force and motion vectors both point in the same direction, \(\theta = 0\) and work is a positive quantity \(Fx\). The weight’s force vector, however, points 180\(^{o}\) away from the motion vector, and so its work calculation is \(Fx \cos (180^o)\) or \(-Fx\).

Some electric components have the ability to act as sources and loads at different times. Both capacitors and inductors have the ability to temporarily contribute to and extract energy from electrical circuits, both having the ability to act as energy storage devices. One of the key concepts necessary to grasp the energy-storing abilities of capacitors and inductors is being able to recognize sources and loads at a glance based on the relationship between voltage polarity and charge motion. A set of three schematic diagrams shows how a capacitor is able to play the role of either source or load depending on what other component it is connected to:

Rechargeable batteries (called “secondary-cell” batteries as opposed to “primary-cell” batteries which cannot be recharged) may also behave as either sources or loads depending on external conditions. If a secondary-cell battery is connected to a resistor, the battery will discharge its energy (i.e. act as a source) while the resistor will dissipate that energy (i.e. act as a load). If a depleted secondary-cell battery is connected to an electrical generator of greater voltage, the generator will source energy to the battery while the re-charging battery will load down the generator (i.e. conventional flow entering the battery’s positive terminal and exiting the negative terminal).

Another practical benefit of clearly comprehending the distinction between electrical sources and electrical loads is being able to understand and troubleshoot 4-20 mA signal “loop” circuits used extensively in industrial instrumentation, especially circuits containing 2-wire (“loop-powered”) process transmitters. A “2-wire transmitter” is a device designed to regulate the amount of electrical current through it to a value determined by some physical variable such as a sensed pressure, temperature, or flow rate. The purpose of such a device is to represent that physical measurement in the form of an electric current that may be carried far distances through wires. What makes this device so troublesome for people to understand is that despite its function to set the value of current in the circuit, it is actually an electrical load and not an electrical source as one might assume. That is, a 2-wire transmitter relies wholly on some other source of electrical power in the circuit to function, although the transmitter solely defines how much current will flow in the circuit by virtue of its function as a regulator. For more information on this subject, refer to the section starting on the page.