A level switch is one detecting the level of liquid or solid (granules or powder) in a vessel. Level switches often use floats as the level-sensing element, the motion of which actuates one or more switch contacts.

Some level switches use a float to sense the level of a liquid surface, actuating an electrical switch by the motion of the float. The electrical schematic symbol for a level switch is actually based on this type of mechanism, with a round “ball” float drawn as the actuating element:

An example of this technology is a level switch manufactured by Magnetrol, with two such switches shown in the following photograph of a steam boiler. These switches sense water level in the steam drum of the boiler: 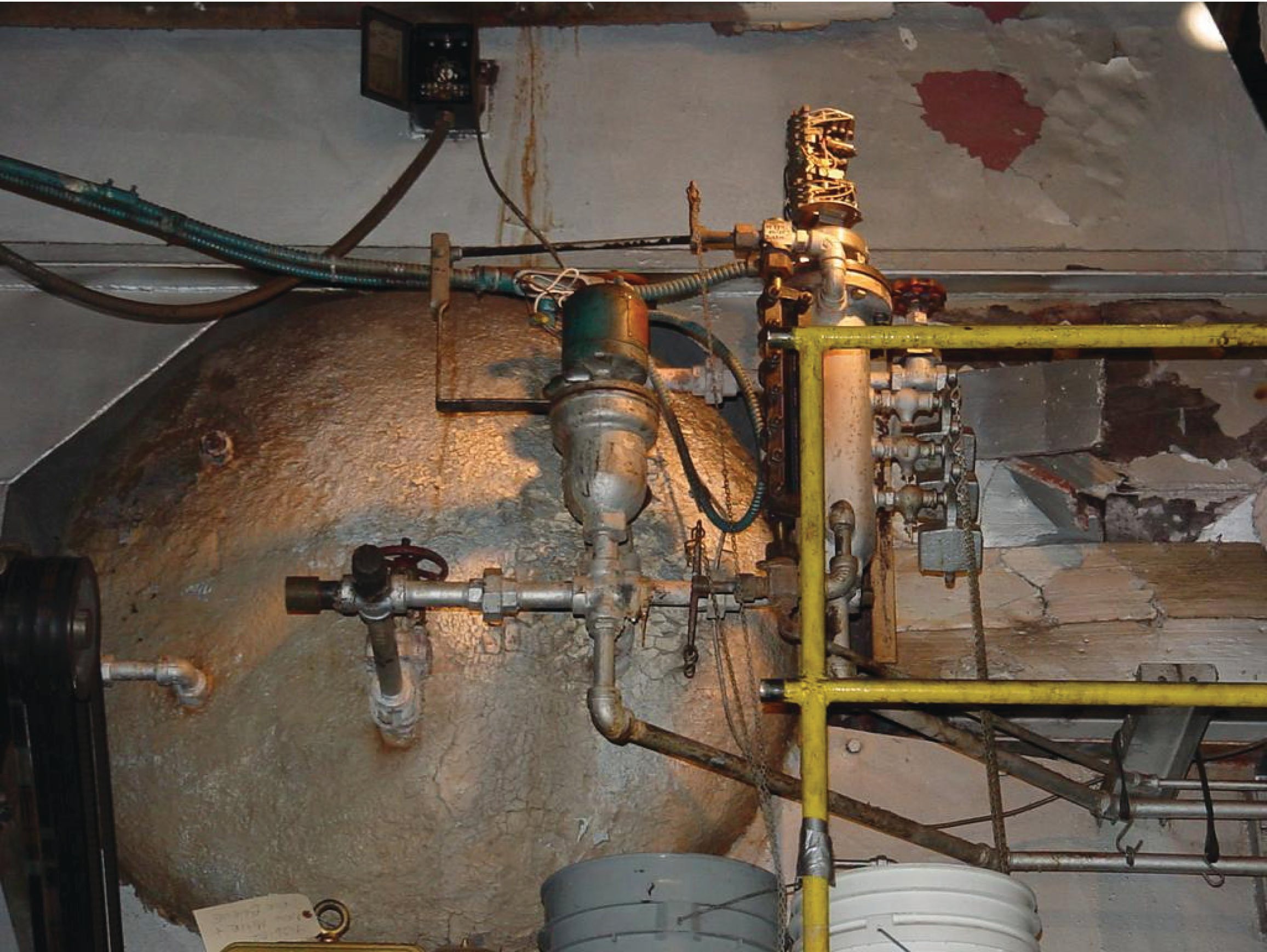 The Magnetrol float switch mechanism uses a mercury tilt bulb, tilted by a magnet’s attraction to a steel rod lifted into position by a float. The float directly senses liquid level, positioning the steel rod either closer to or farther away from the magnet. If the rod comes close enough to the magnet, the mercury bottle tilts to change the switch’s electrical status:

A feature of this design is complete isolation between the electrical components and the “wet” components sensing the liquid level. The steel rod moves inside a non-magnetic metal tube, with the tube sealing process fluid pressure from escape while still allowing the magnetic tilt switch to sense float position.

Simpler float switch designs also exist for direct installation in open (vented) process vessels, resembling the float valve assembly on a water-flush toilet. Any “limit” style switching element will work here, including inductive proximity switches, to sense the float’s position in an environment where no isolation need exist between the switch and the process fluid(s):

This level switch uses a metal tuning fork structure to detect the presence of a liquid or solid (powder or granules) in a vessel: 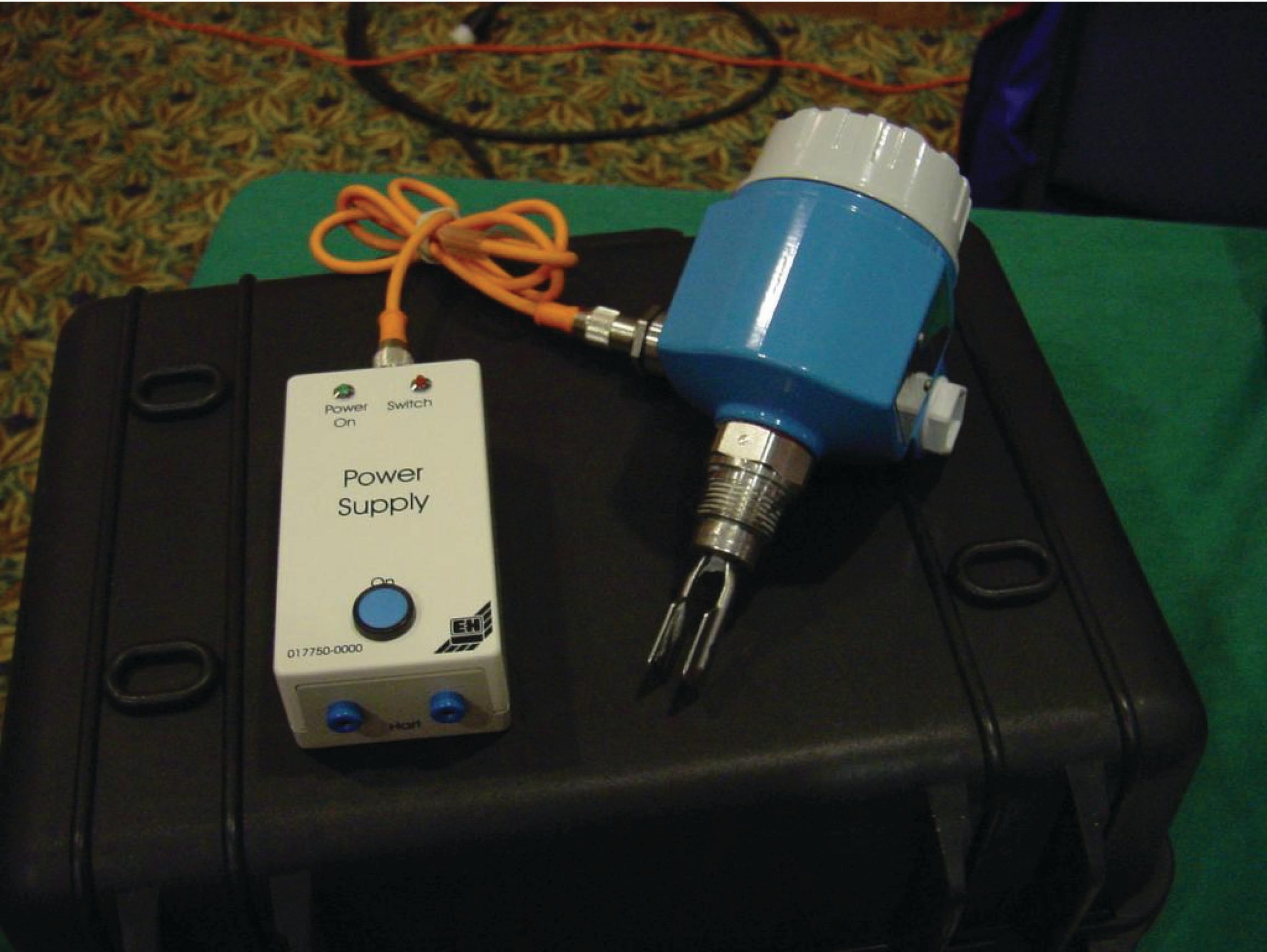 An electronic circuit continuously excites the tuning fork, causing it to mechanically vibrate. When the prongs of the fork contact anything with substantial mass, the resonant frequency of the fork decreases. The circuit detects this frequency change and indicates the presence of mass contacting the fork. The forks’ vibrating motion tends to shake off any accumulated material, such that this style of level switch tends to be resistant to fouling.

It should be noted that the previous photograph of the tuning-fork style level switch is complete: the fork “paddles” are only a couple of inches long and require no physical extensions in order to properly detect liquid or solid material at that point.

A more primitive variation on the theme of a “tuning fork” level switch is the rotating paddle switch, used to detect the level of powder or granular solid material. This level switch uses an electric motor to slowly rotate a metal paddle inside the process vessel. If solid material rises to the level of the paddle, the material’s bulk will place a mechanical load on the paddle. A torque-sensitive switch mechanically linked to the motor actuates when enough torsional effort is detected on the part of the motor. A great many level switches of this design sold in the United States under the trade-name Bindicator (so-called because they detected the level of solid material in storage bins).

A “Bindicator” style of level switch appears in this photograph (painted black, against a white-painted hopper), used to detect the presence of soda ash powder in a hopper at a water treatment plant: 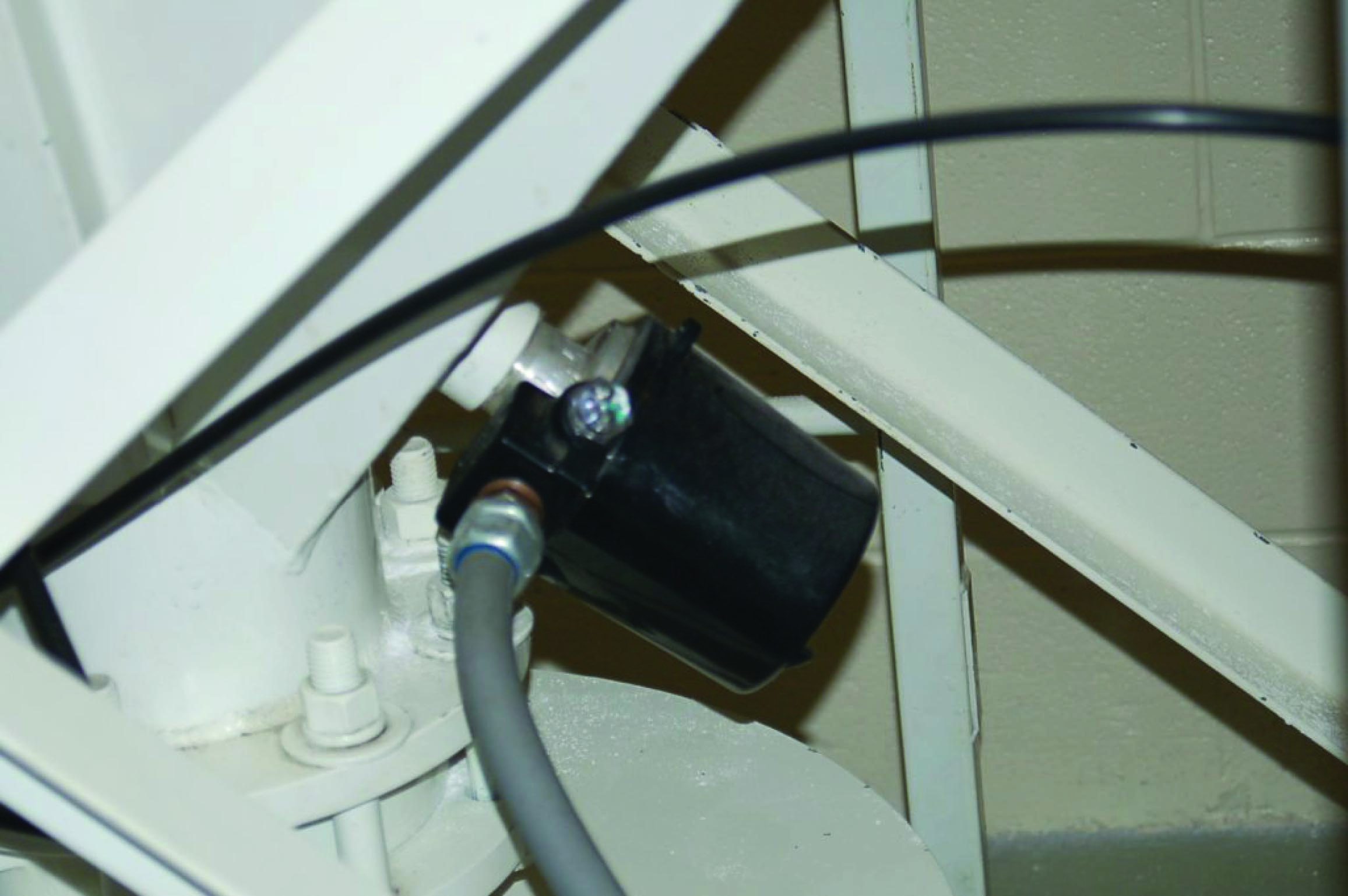 Yet another style of electronic level switch uses ultrasonic sound waves to detect the presence of process material (either solid or liquid) at one point: 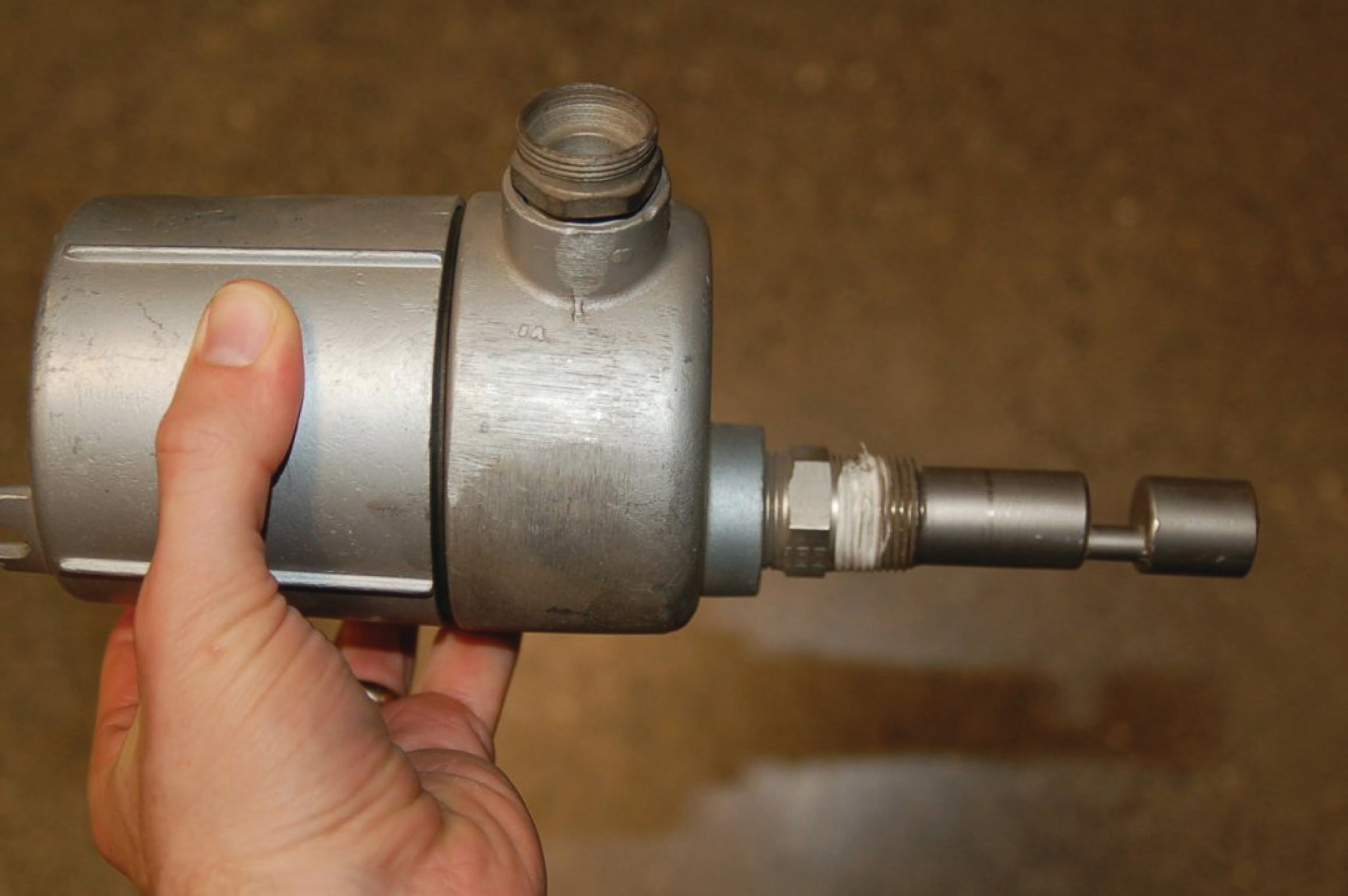 Sound waves pass back and forth within the gap of the probe, sent and received by piezoelectric transducers. The presence of any substance other than gas within that gap affects the received audio power, thus signaling to the electronic circuit within the bulkier portion of the device that process level has reached the detection point. The lack of moving parts makes this probe quite reliable, although it may become “fooled” by heavy fouling.

Another electronic liquid level switch technology is capacitive: sensing level by changes in electrical capacitance between the switch and the liquid. The following photograph shows a couple of capacitive switches sensing the presence of water in a plastic storage vessel: 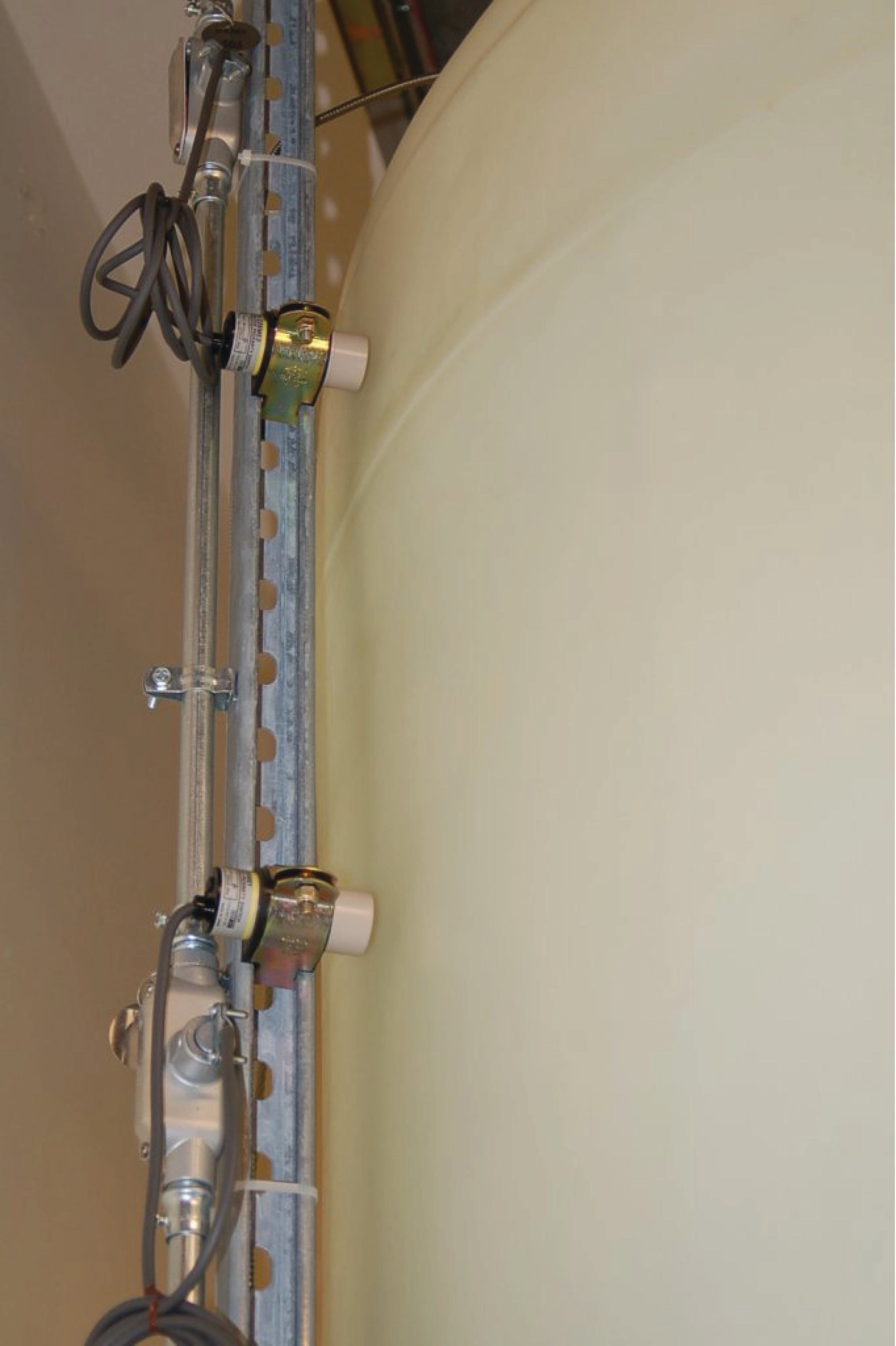 Perhaps the simplest (and oldest) form of electrical level detection is where a pair of metal electrodes contacts the process material to form a complete electrical circuit, actuating a relay. This type of switch, of course, only works with granular solids and liquids that are electrically conductive (e.g. potable or dirty water, acids, caustics, food liquids, coal, metal powders) and not with non-conducting materials (e.g. ultra-pure water, oils, ceramic powders).

A legacy design for conductive level switches is the model 1500 “induction relay” originally manufactured by B/W Controls, using a special transformer/relay to generate an isolated AC probe voltage and sense the presence of liquid: 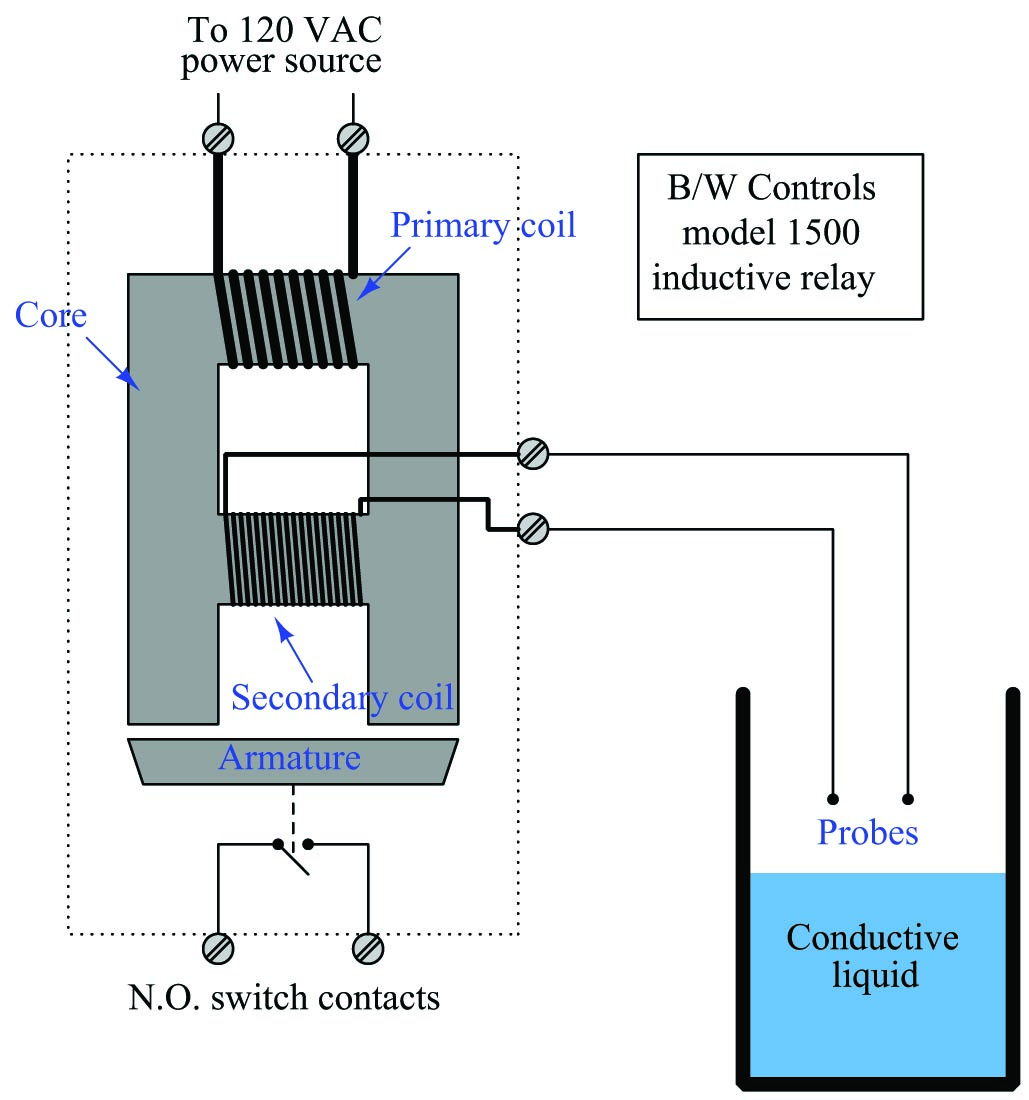 Line voltage (120 VAC) energizes the primary coil, sending a magnetic field through the laminated ferrous core of the relay. This magnetic field easily passes through the center of the secondary coil when the secondary circuit is open (no liquid closing the probe circuit), thus completing the magnetic “circuit” in the core. With the magnetic circuit thus completed, the armature will not be attracted to the core. However, when a circuit is completed by liquid level rising to contact both probes, the secondary coil’s resulting current “bucks” the magnetic flux through its center, causing more magnetic flux to bypass to the end poles where it attracts the ferrous armature toward the core frame. This physical attraction actuates switch contacts which then signal the presence of liquid level at the probes.

The following pair of illustrations shows the two conditions of this level switch, with the magnetic lines of flux highlighted as dashed lines through the core: 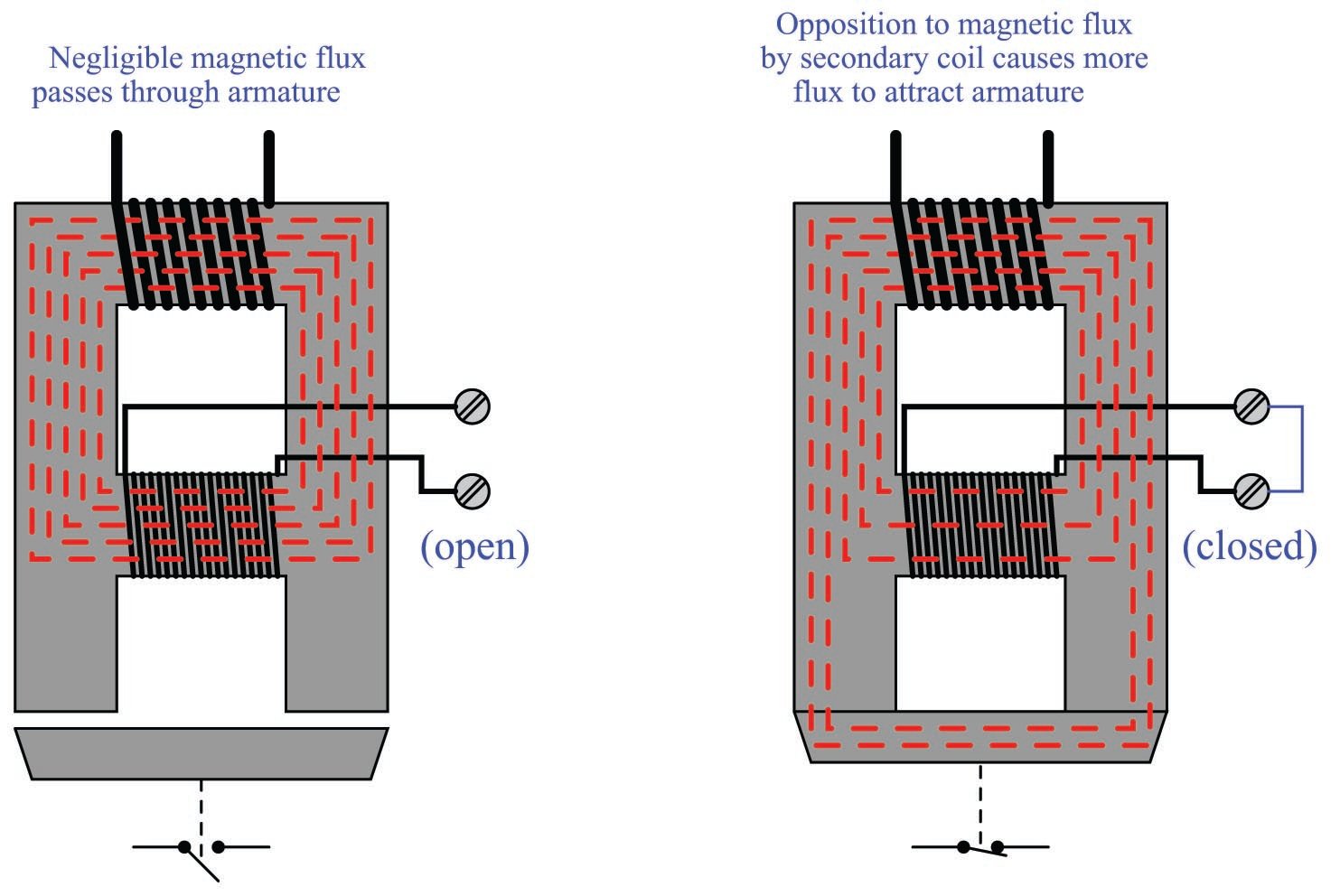 The “transformer” design of this particular conductive level switch not only provides electrical isolation between the probes and the energizing (120 VAC) circuit, but it also enables a wide range of detection voltages to be generated for the probes just by altering the number of wire “turns” in the secondary coil. The B/W Controls model 1500 inductive relay is available in a variety of AC voltage output levels, ranging from 12 VAC (for detecting metallic substances) to 800 VAC for use with demineralized water such as that found in steam boiler systems.