A proximity switch is one detecting the proximity (closeness) of some object. By definition, these switches are non-contact sensors, using magnetic, electric, or optical means to sense the proximity of objects.

Recall from section 9.1 that the “normal” status of a switch is the resting condition of no stimulation. A proximity switch will be in its “normal” status when it is distant from any detectable object.

Being non-contact in nature, proximity switches are often used instead of direct-contact limit switches for the same purpose of detecting the position of a machine part, with the advantage of never wearing out over time due to repeated physical contact.

The schematic diagram symbol for a proximity switch with mechanical contacts is the same as for a mechanical limit switch, except the switch symbol is enclosed by a diamond shape, indicating a powered (active) device:

Many proximity switches, though, do not provide “dry contact” outputs. Instead, their output elements are transistors configured either to source current or sink current. The terms “sourcing” and “sinking” are best understood by visualizing electric current in the direction of conventional flow rather than electron flow.

The following schematic diagrams contrast the two modes of switch operation, using red arrows to show the direction of current (conventional flow notation). In both examples, the load being driven by each proximity switch is a light-emitting diode (LED): 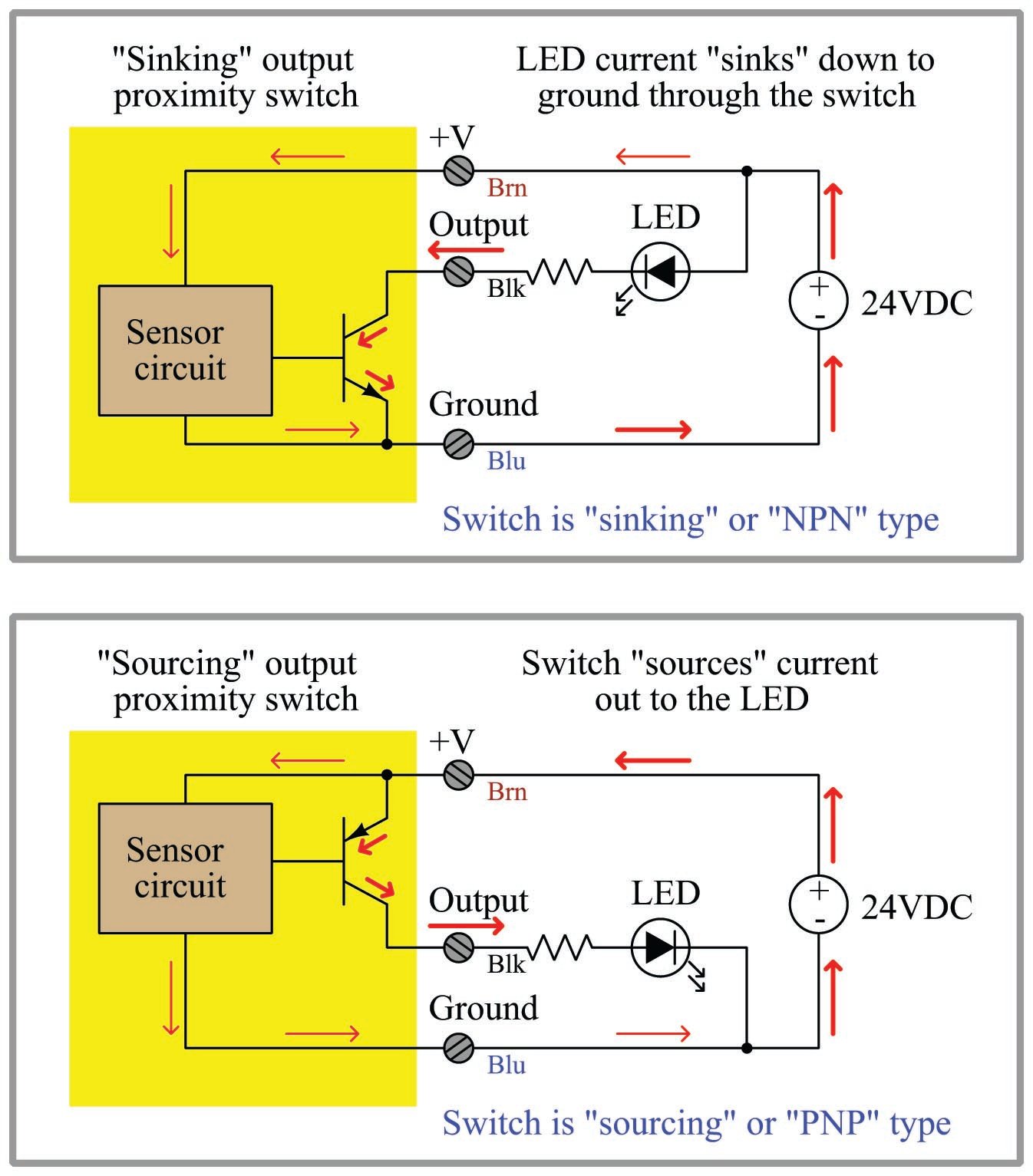 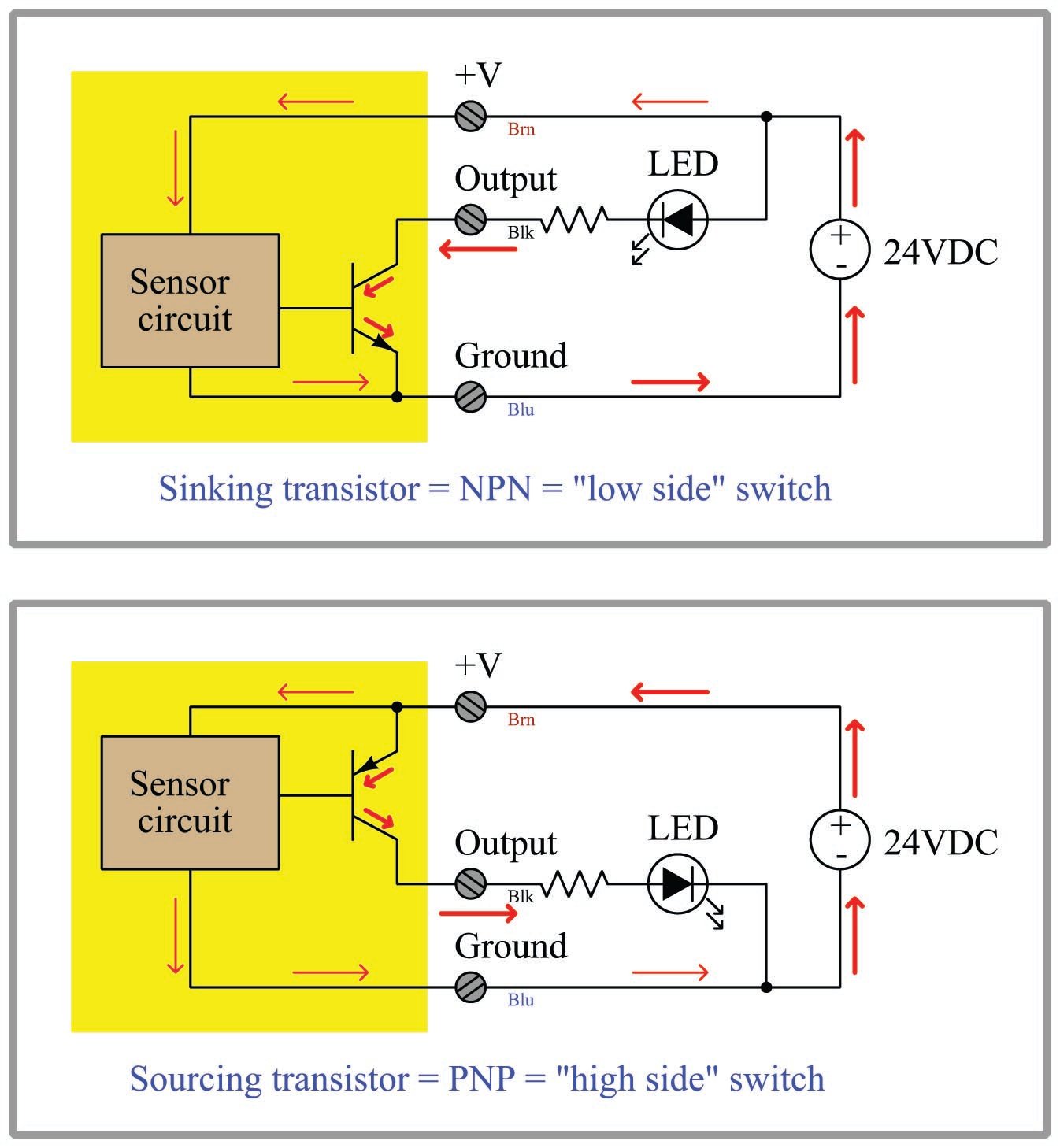 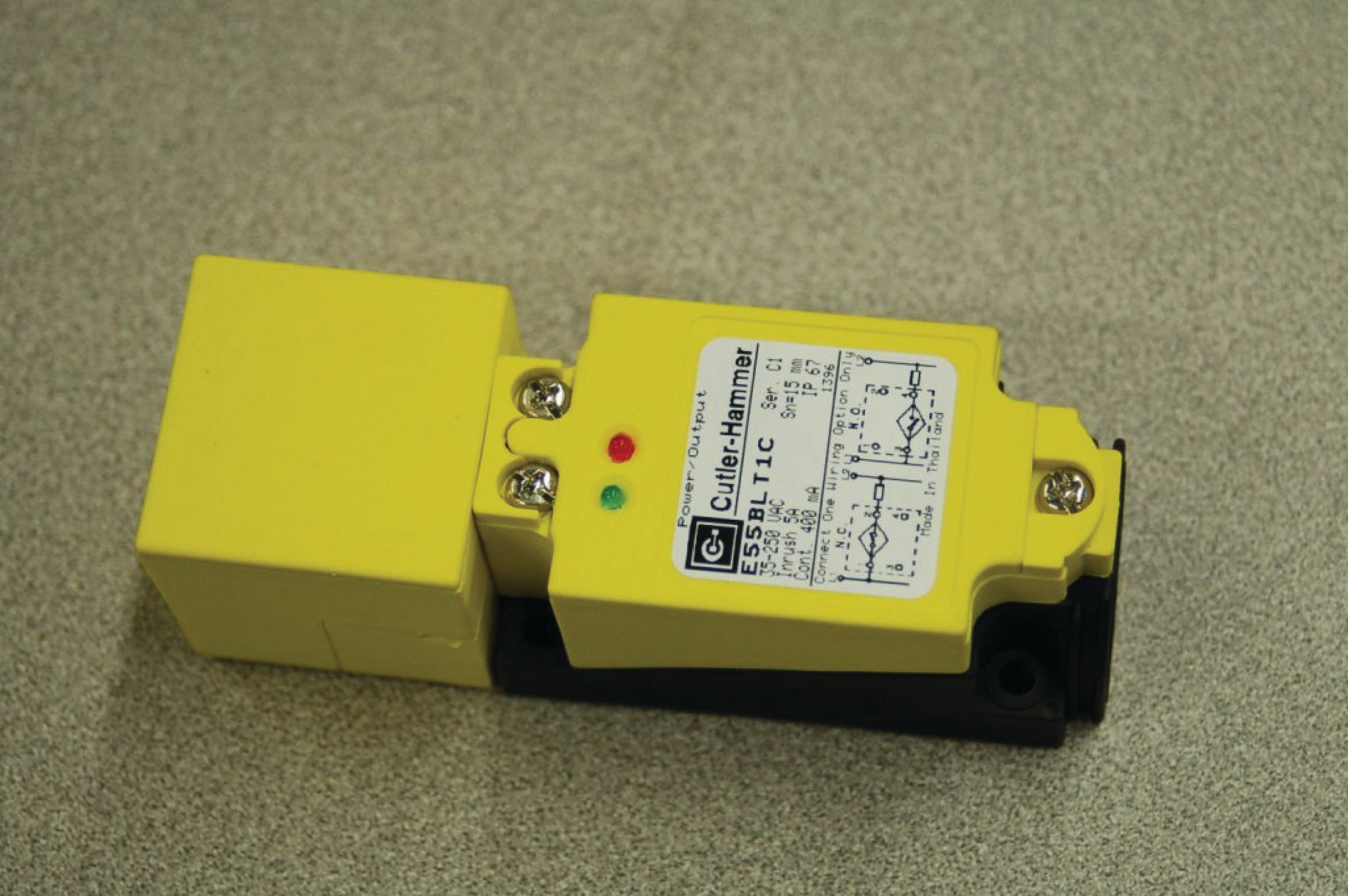 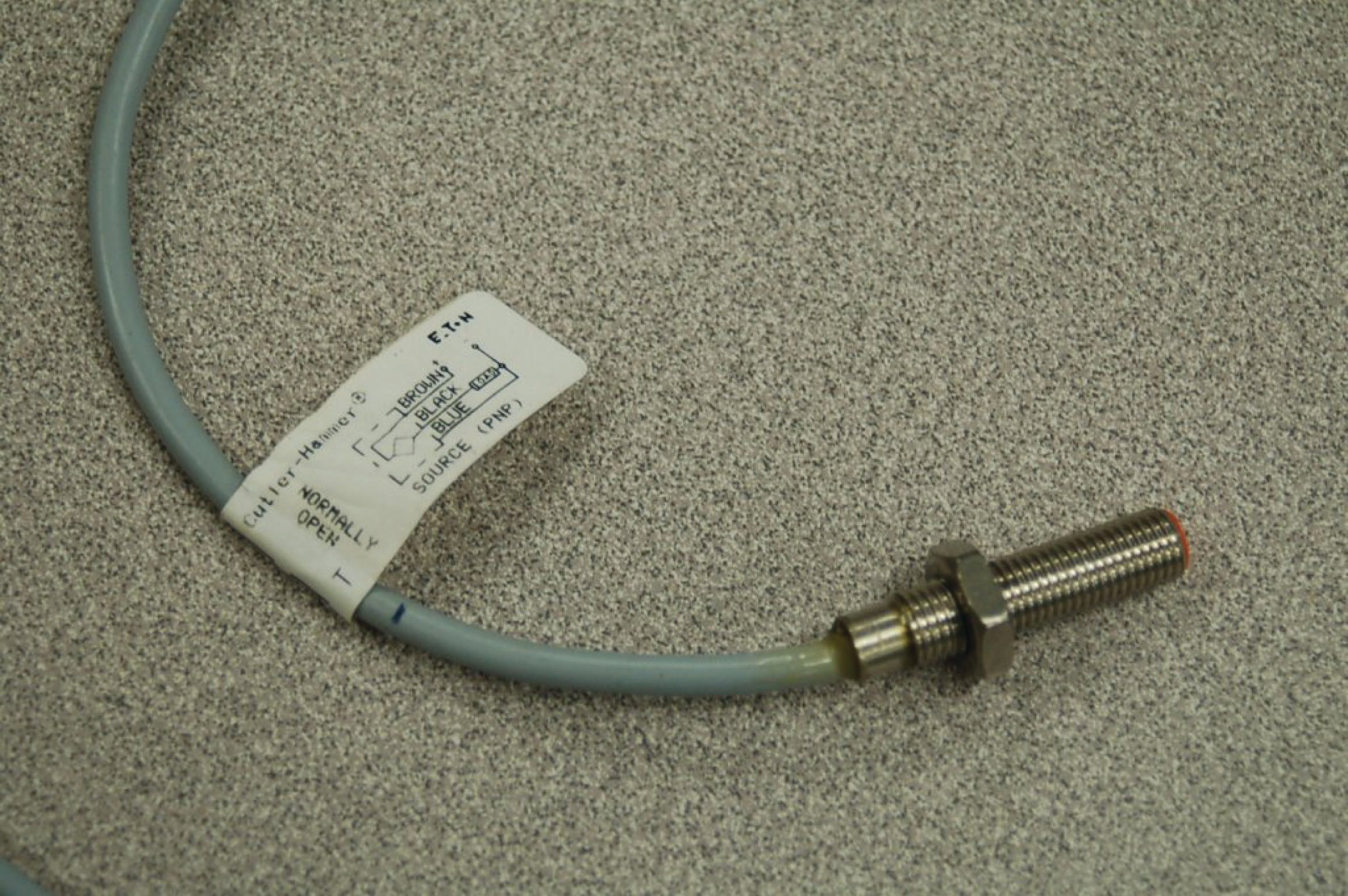 Many industrial proximity switches have built-in LED indicator lamps to help technicians diagnose circuit problems by directly indicating switch status. With just a glance, one may tell whether or not the proximity switch is detecting the presence of an object.

The next photograph shows a proximity switch detecting the passing of teeth on a chain sprocket, generating a slow square-wave electrical signal as the sprocket rotates. Such a switch may be used as a rotational speed sensor (sprocket speed proportional to signal frequency) or as a broken chain sensor (when sensing the rotation of the driven sprocket instead of the drive sprocket): 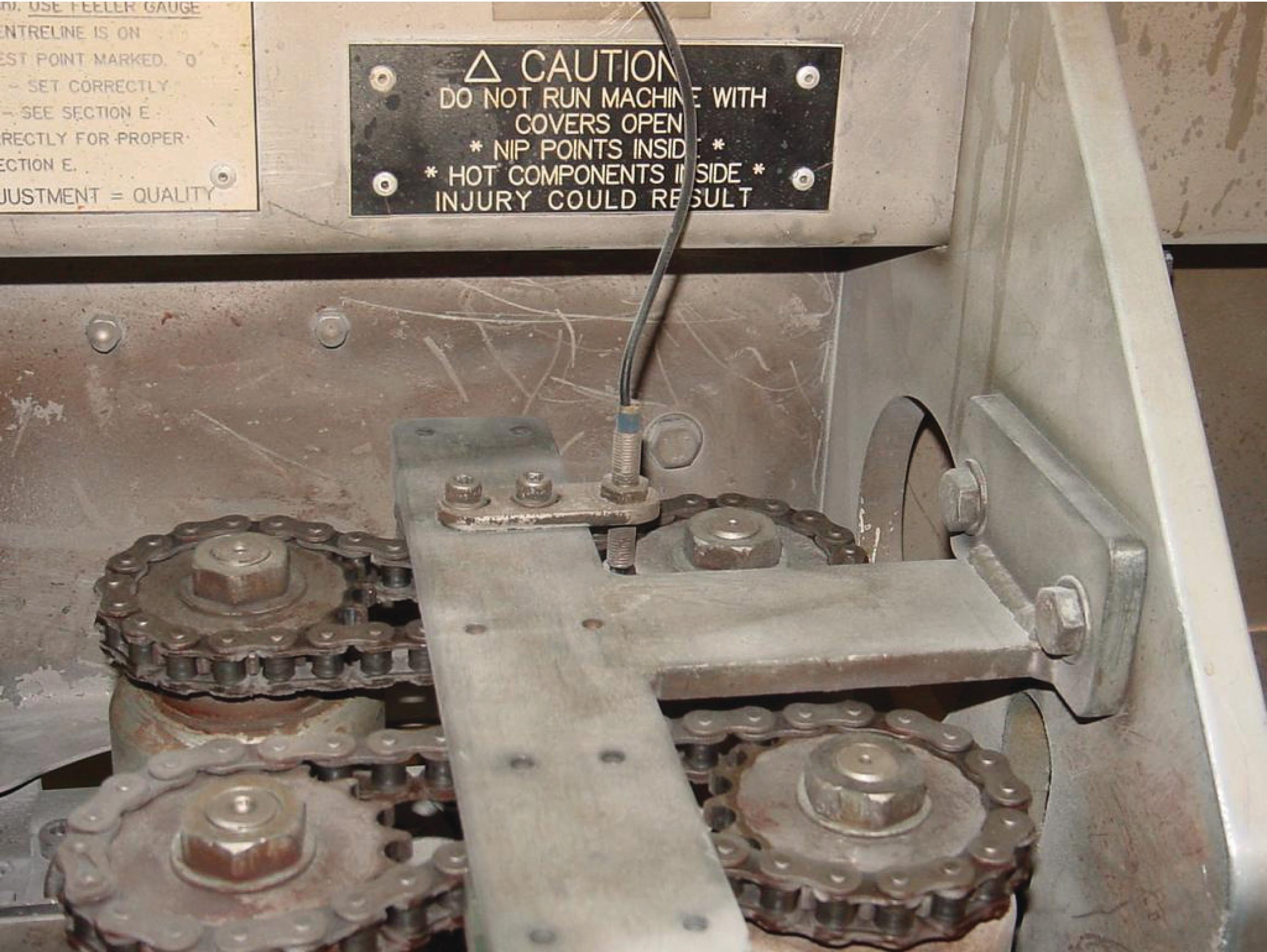 These switch characteristics are commonly fixed, and must be specified when ordering the device. Likewise, the detection range of a proximity switch is usually a fixed parameter rather than being adjustable.