Functional Diagrams: the Flow of Information within a Control System

Functional Diagrams: the Flow of Information within a Control System

A unique form of technical diagram for describing the abstract functions comprising a control system (e.g. PID controllers, rate limiters, manual loaders) is a functional diagram. This form of document finds wide application in the power generation industry to document control strategies. Functional diagrams focus on the flow of information within a control system rather than on the process piping or instrument interconnections (wires, tubes, etc.). The general flow of a functional diagram is top-to-bottom, with the process sensing instrument (transmitter) located at the top and the final control element (valve or variable-speed motor) located at the bottom. No attempt is made to arrange symbols in a functional diagram to correspond with actual equipment layout: these diagrams are all about the algorithms used to make control decisions, and nothing more. 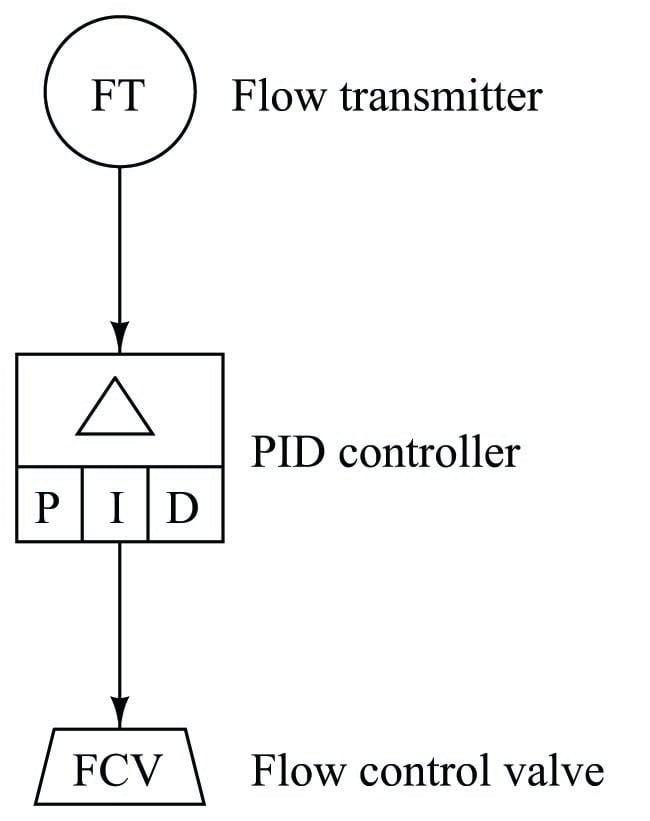 A cascaded control system, where the output of one controller acts as the setpoint for another controller to follow, appears in functional diagram form like this: 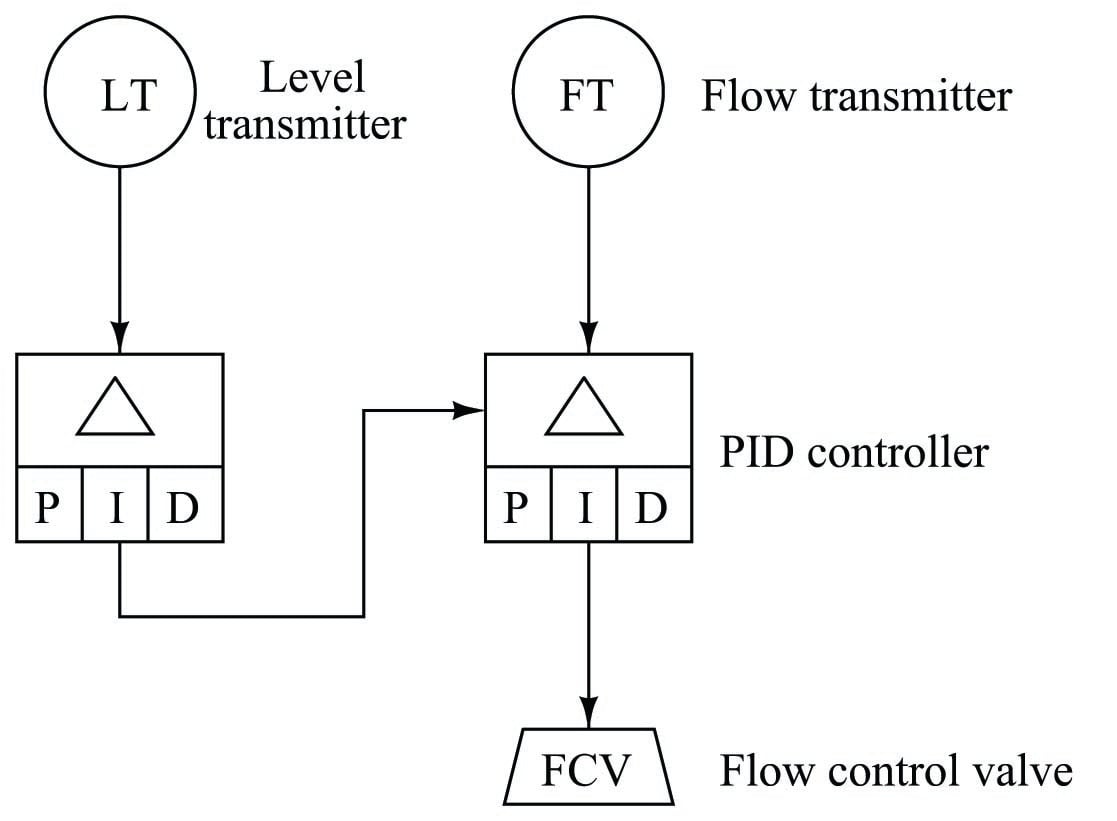 In this case, the primary controller senses the level in a vessel, commanding the secondary (flow) controller to maintain the necessary amount of flow either in or out of the vessel as needed to maintain level at some setpoint.

Functional diagrams may show varying degrees of detail about the control strategies they document. For example, you may see the auto/manual controls represented as separate entities in a functional diagram, apart from the basic PID controller function. In the following example, we see a transfer block (T) and two manual adjustment blocks (A) providing a human operator the ability to separately adjust the controller’s setpoint and output (manipulated) variables, and to transfer between automatic and manual modes: 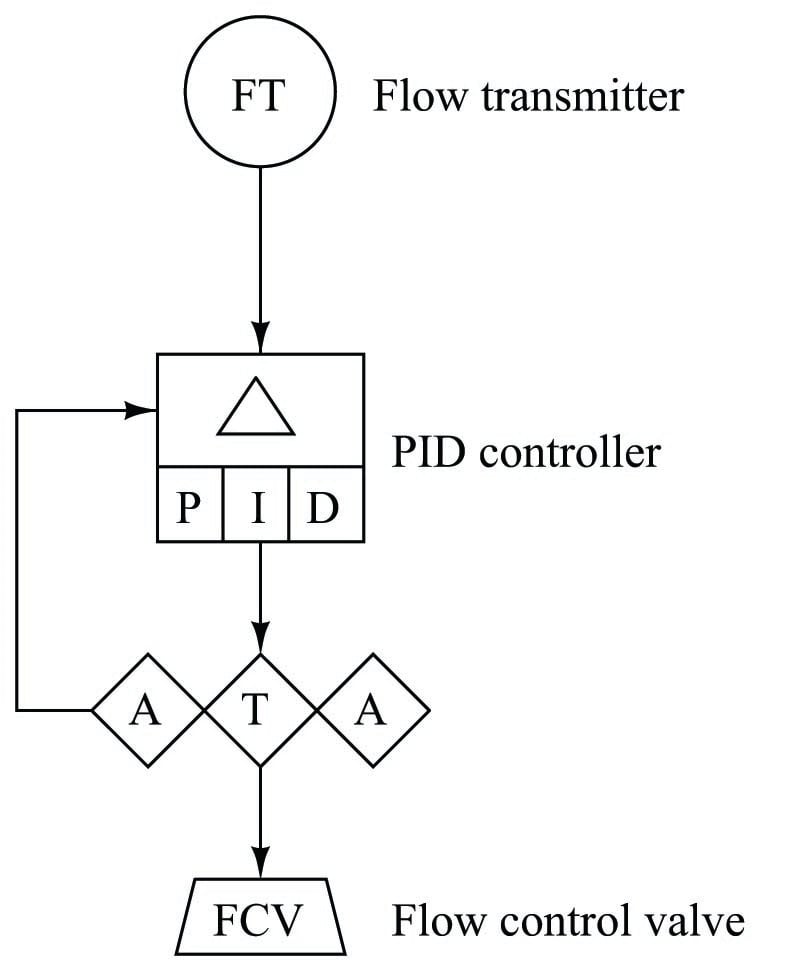 Rectangular blocks such as the \(\Delta\), P, I, and D shown in this diagram represent automatic functions. Diamond-shaped blocks such as the A and T blocks are manual functions (i.e. set by a human operator). Showing even more detail, the following functional diagram indicates the presence of setpoint tracking in the controller algorithm, a feature that forces the setpoint value to equal the process variable value any time the controller is in manual mode: 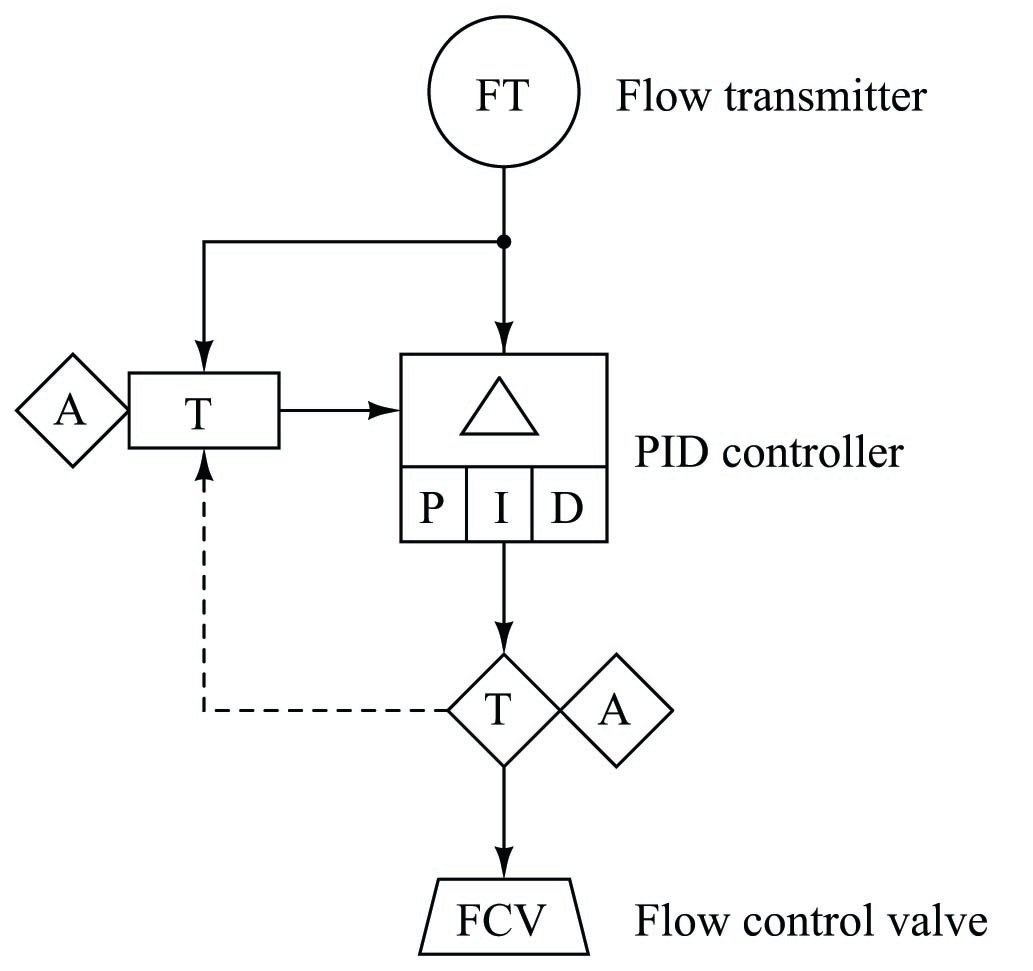 Here we see a new type of line: dashed instead of solid. This too has meaning in the world of functional diagrams. Solid lines represent analog (continuously variable) signals such as process variable, setpoint, and manipulated variable. Dashed lines represent discrete (on/off) signal paths, in this case the auto/manual state of the controller commanding the PID algorithm to get its setpoint either from the operator’s input (A) or from the process variable input (the flow transmitter: FT).