The HG1125 and HG1126 are Honeywell’s latest sensors that can withstand a shock of up to 40,000 G. Honeywell designed these to be suitable for extremely harsh impacts, such as those found in ballistics tests.

Matt Picchetti, Vice President and General Manager of Navigation and Sensors at Honeywell, mentioned, “Low cost, ultra-rugged IMUs are in high demand across a variety of market segments where customers need high-performance navigation, but are limited by size or cost constraints.”

These sensors are meant to meet the needs of these markets. 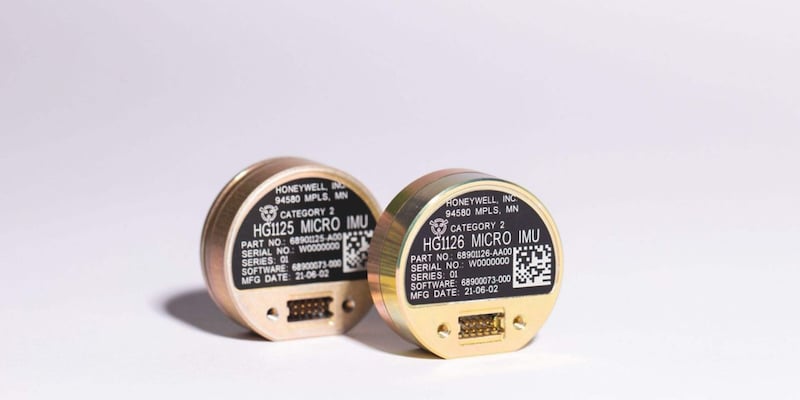 The HG1126 and HG1125 IMUs. Image used courtesy of Honeywell

What Do Inertial Sensors Measure?

For the industrial sector, these sensors can determine the rotational speed of a drill bit in a deep borehole, such as those used in well drilling, petroleum, and mining. The rotational speed can be compared to what is expected from the equipment to ensure that the drill bit is not bound up, which can damage the drilling rig.

It can also monitor vibration signatures, even at high drilling speeds, to track the mechanical wear of components. As bearings begin to wear, they will change their vibration signature, which can be classified and used to determine when preventative maintenance must be performed.

These sensors can also be used in navigational systems. For some high-speed, rotating, or otherwise complicated flight patterns, Global Positioning Systems (GPS) may not be able to keep up. This is often the case with projectiles and some unmanned aircraft. The HG1125 and HG1126 can be used instead, as their inertial data can be used to calculate the position of the object.

The HG1125/HG1126 have a small form factor, only 31 mm deep and 11.7 mm high, weighing only 24 grams. They are approximately the size of a bottle cap. Embedded in this compact package are Micro-Electro-Mechanical System (MEMS) gyroscopes, accelerometers, and magnetometers for data collection. They are powered by 3.3 V DC but consume less than 0.5 W during operation.

HG1125 is sitting on top of a water bottle for scale. Image used courtesy of Honeywell

The new Honeywell IMUs are designed for high-impact, high-speed environments in both military and commercial markets. They are not ITAR restricted, so they can be sold internationally and used in overseas markets. This adds to their versatility and potential widespread use.